Rory MacDonald (23-9-1, 16 finishes) headlines the second 2022 PFL playoff event when the former Bellator champion faces Magomed Umalatov (12-0, 11 finishes) in the welterweight semifinals. Shortly after flying in Tuesday for Saturday’s event (2 p.m. Eastern main card) at Cardiff Motorpoint Arena in Cardiff, Wales, The 33-year-old Canadian caught up with The Post’s Scott Fontana for another edition of the Post Fight Interview.

Q: Your semifinals opponent Umalatov is unbeaten. What do you remember about your mentality from the time early in your career when you were unbeaten, especially heading into the Carlos Condit fight?
A: I didn’t think I was ever gonna lose, to be honest. It was kind of a wake up call when I lost that fight. There’s gonna be ups and downs in this career. I was a young kid. I think I was 19 or 20 years old or something like that, full of hopes and dreams. It was a cool time.

Q: Having been in the sport so long and achieved a lot, what’s different about your motivation as a fighter now compared to back then?
A: I’d say it’s more about fighting for my family at this point in my career. It’s not so much of an inner, selfish desire. It’s still there, that part of it of achieving goals; it’s there. But the other part of it is providing for my family. And that’s probably the biggest draw for me.

Q: You began training in Austin, Texas this year. Is your family with you?
A: I go back and forth between Austin and Montreal, where my family is.

Q: You had first started training in the United States at Sanford MMA in Florida as well. How has it been adjusting to being away from them more since the switch?
A: Well, I’m only gone for, like, five or six days at a time, so it’s really not too bad. When I was at Sanford, it was tougher because of the COVID restrictions. I’m able to fly a lot more often now, with the border being a lot easier to cross. The year before was much more difficult. I was doing hotel quarantines and separated for months at a time, in one in one scenario. So that last year wasn’t an easy ride being away from the family. This year has been much better. But it always sucks leaving home. The kids hate it. I do too. 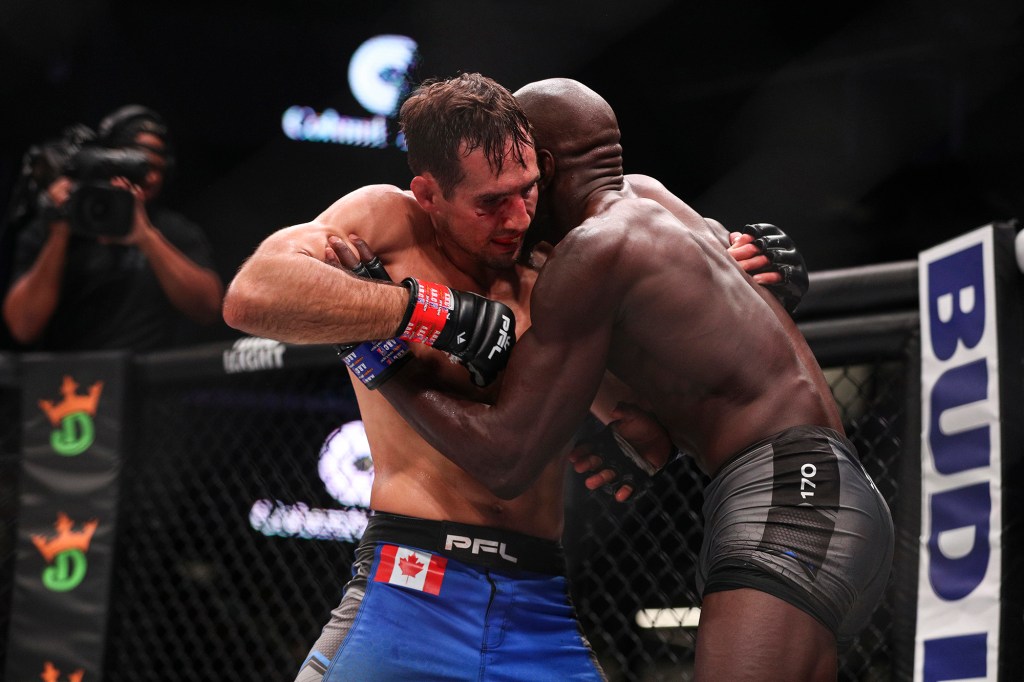 Q: How do you assess Umalatov as a fighter?
A: He’s obviously a strong puncher. I think he’s probably grown up wrestling, and he’s got that Russian style. It’s a dangerous style to compete against. Plus, he has power in his hands. He’s that unbeaten confidence behind them. So I think just go out there, stick to a game plan, be technical, and just be sharper than him in every turn, and I should be good to go.

Q: You had basically punched your playoff ticket with a first-round submission and six standings points in your first fight this year. Were you cognizant of that going into the fight against Sadibou Sy, which you lost by decision?
A: It definitely gave me some peace of mind that I was pretty much in for sure. Obviously, I was still gunning to get another six points. I was very confident that I could put Sadibou away, but it didn’t go that way.

Q: Do you change the way you fight in the second leg of the regular season, knowing you want to make sure you’re ready for the playoffs?
A: Not really, no. My mindset this year was to really put myself on an upward trajectory and have my performance stand out. So I wasn’t fighting [to be] protecting anything. I had been training to fight a certain way that would be impressive. Obviously, the fight wasn’t that way, which is super disappointing, but that’s just how it goes sometimes.

Q: Why do you think the Sy fight went the way it did?
A: I think I trapped myself in thinking I’m much better than him in one scenario, which would be getting on top of him, and I just convinced myself that was the way to beat him. And I didn’t adjust. I was kind of like a dog on the bone, like that’s what I need to do to win. And when he was shutting down my takedowns, I wasn’t adjusting, and I kind of realized it a little too late. And before you know it, the fight’s over, and he won the fight. So, I think just not being able to make adjustments at the right time.

Q: Is that a learning experience for you?
A: Yeah. I should have kept an open mind. And even knowing I have strengths over someone, I’m a well-rounded fighter, so I don’t need to fight so closed-minded like I did.

Q: What did you learn from last year’s PFL playoff experience that could help you this year?
A: I think the longevity of stretching out your training camps and trying to not peak too early, too often and then have a big fall down. I felt pretty drained last year. I mean, it’s still hard this year, but I think I’ve kept a better pace throughout the regular season going into the playoffs.

Q: Do you recall your first experience watching MMA?
A: I was probably 6 or 7 years old; my dad, my brother and I were at a video rental store. My dad wanted to rent the UFC tapes, and I wasn’t interested at all. I wanted to get some video games or something, and my brother and my dad were like, “No, no, no. Let’s get it.” So they ended up getting it. And when they put it on, I couldn’t even believe it was real. It was just kind of shocking to see the first time; that people actually did that.

Q: Typical walkaround weight between fights?
A: About 195 pounds

Q: Typical weight on fight night?
A: I’ve had it as low as, like, 178 pounds all the way up to 198 pounds (laughs). So pretty weird range of weights that I’ve walked into a fight.

Q: Where do you prefer that weight to be?
A: Somewhere in the middle (laughs). 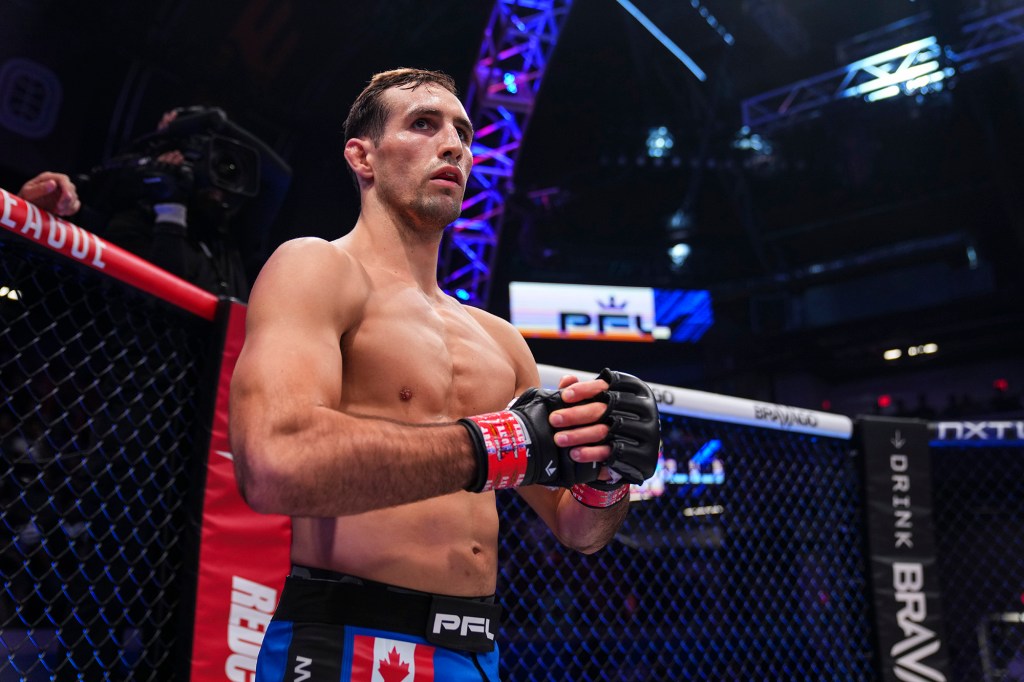 Q: How do you like it cooked?
A: Medium, in most cases.

Q: Favorite fight of yours?
A: Obviously, the Robbie Lawler fight was pretty historic and did the most, out of any fight of my life, for my career. It’s kind of still helping. It established my name in the sport, so that was probably the biggest memory. And B.J. Penn was a good one because he was kind of like an icon [and] hero of mine growing up. There’s some ones that were highlight reels but didn’t have as much significance to them, but it’s fun to go back and have dominated those fights. Those are always fun. Paul Daley was a good fight. Douglas Lima was a good one. Those were all pretty memorable experiences.

Q: Favorite movie?
A: I’m probably not considered a movie guy. But I do enjoy a good movie.