SEATTLE — Goalie Igor Shesterkin buoyed the Rangers to at least a point in their 3-2 overtime loss to the Kraken on Thursday night at Climate Pledge Arena.

The Rangers can’t afford to waste a spectacular performance from Shesterkin, who hasn’t been able to put forth such an effort as consistently as he did to start last season. Shesterkin had been strong in sliding across the crease for much of the game until Justin Schultz’s game-winner in overtime. He ultimately finished with 29 saves on 32 shots.

“Definitely,” Rangers head coach Gerard Gallant said when asked if his team needs to get two points when Shesterkin is on like he was Thursday night. “He was good. He made some great saves and key saves, especially in that second period when it was 1-1. He kept us in the game and then we found a way to get a point at the end. But it’s not good enough. We’re better than that.” 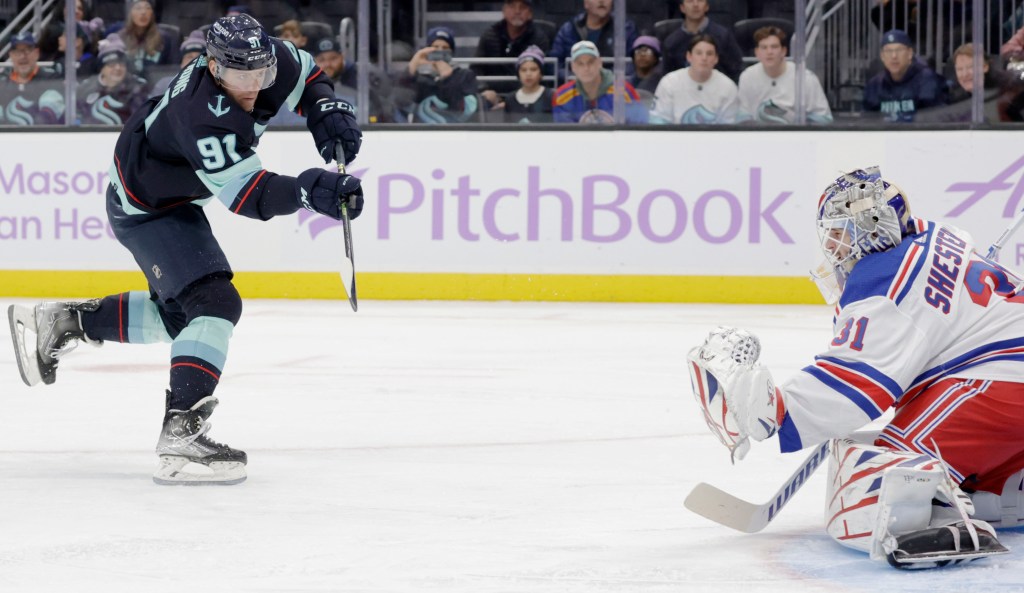 Igor Shesterkin makes a save on Daniel Sprong during the Rangers’ 3-2 overtime loss to the Kracken.AP

Shesterkin was the only thing standing between the Kraken and a multi-goal middle frame, over which Seattle outshot the visitors 16-5 and controlled the pace of play for much of the period. A minute and a half into the middle frame, Shesterkin gloved down a hard shot from Schultz before Matty Beniers rung one off the post. The Russian netminder later denied Daniel Sprong on a breakaway.

After the overtime loss, Shesterkin is now 8-2-3 on the season.

The last time Libor Hajek played this many games in a row was a stretch of nine contests from mid-December to early January last season.

Hajek, who skated in his sixth consecutive game Thursday night against the Kraken, then didn’t play in 59 of the next 67 matchups, including all 20 playoff games, in 2021-22. Rangers head coach Gerard Gallant assured Hajek that he would not be subjected to the same limited playing time as last season, and so far the club has kept that promise.

“It’s been a while [since] I’ve played that many games in a row,” Hajek told The Post after the Rangers’ optional morning skate at Climate Pledge Arena. “I’m just trying to enjoy every game. I just think I need to be confident. Every game must be good, you know, like consistent. Just working on that and being the best part for the team and help the team to win.”

The 24-year-old defenseman said he has tried to focus on the little details and just keeping his game simple, which is something the coaching staff has asked of him. In the nine games he’s been in so far, Hajek has played a relatively solid game, but Thursday night wasn’t one of his best. Considering how little he played last season, it likely will take a while until Hajek can begin taking major strides.

“It’s really beneficial for him,” Gallant said of Hajek’s recent stretch of games. “It’s not great for [Zac Jones]. He gets a chance to go on a little bit of a run here. He’s played good solid hockey, so that’s what you want. That competitions has been going on all year long. We like both of them. We’re happy with our defense obviously. It’s the way it is.

“Jonesy will get another chance. When he does, go in and play well and play solid. He’s a young player.”

Jones was a healthy scratch for a fourth straight game on Thursday.

The Rangers went with the same lineup against the Kraken on Thursday as they did in their 4-1 win over the Coyotes this past weekend at Madison Square Garden. … Ryan Reaves was scratched for the sixth time this season and the fifth time in the last six games.