Any predictions of a Super Bowl 47 rematch took a big hit last weekend.

The San Francisco 49ers and the Baltimore Ravens both lost their starting quarterbacks. Make that two season-ending injuries at quarterback in the top-heavy NFC for the 49ers, as free-agent-to-be Jimmy Garoppolo joins Trey Lance on the bench.

The news is potentially better for the Ravens, who consider Lamar Jackson’s availability “week to week” with a sprained knee. The Ravens’ 2021 season fell apart in December when Jackson missed five starts. The AFC — and the North Division’s hard-charging Bengals — doesn’t offer much margin for error again.

Here are The Post’s NFL power rankings for Week 14:

A.J. Brown finished with eight catches for 119 yards and two touchdowns in his first game back in Tennessee since a blockbuster trade on draft night. Jalen Hurts keeps climbing up MVP ballots, as he threw for three touchdowns and ran for another in a 35-10 win against the Titans. The Eagles are 11-1 for the fourth time — first since 2004. 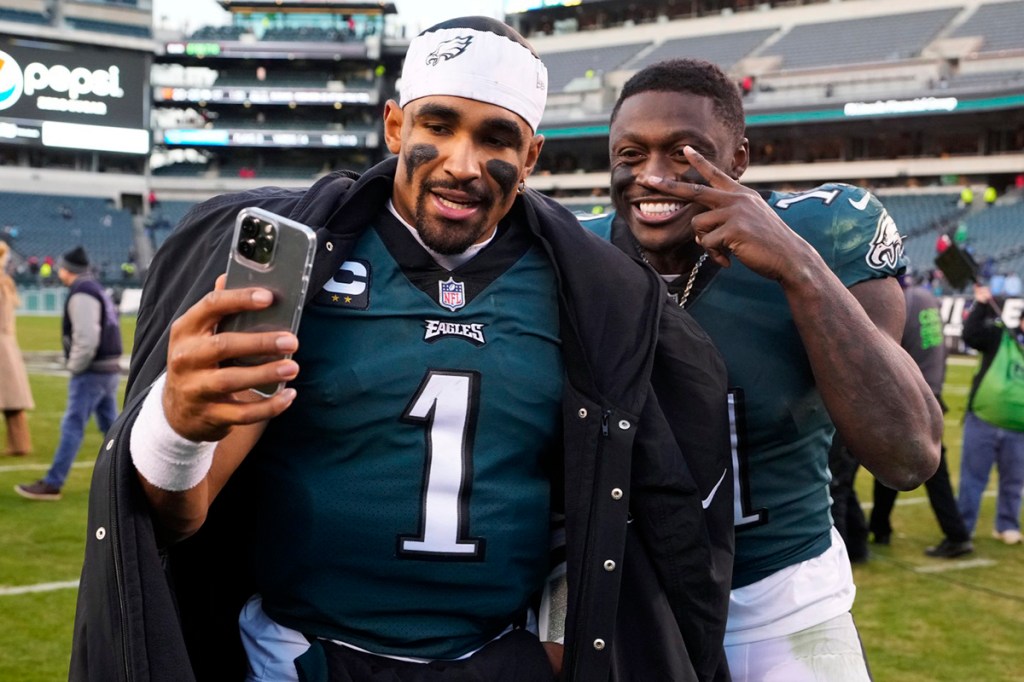 Jalen Hurts and the Eagles are back at No. 1.AP

Josh Allen became the first player in NFL history with three seasons of at least 25 touchdown passes and five rushing touchdowns as the Bills won in Foxborough, Mass., for the third straight time, with a 24-10 victory against the Patriots. The Bills, who had started 0-2 in the AFC East, pressured Mac Jones plenty, even without the injured Von Miller.

Who needs free agent Odell Beckham Jr.? Dak Prescott threw two touchdown passes to Michael Gallup and another to CeeDee Lamb in a 54-19 demolition of the Colts. Tony Pollard rushed for two scores. One interception helped turn a one-point lead into eight before halftime and a second essentially ended the game with less than 11 minutes remaining.

The Vikings improved to 9-0 in one-score games and completed a four-game sweep of the AFC East with a 27-22 win against the Jets. Camryn Bynum sealed the victory with an interception at the 1-yard line with 10 seconds remaining, assuring that a 20-3 third-quarter lead didn’t go to waste. Justin Jefferson scored a touchdown and set up another with a tough over-the-middle catch.

Joe Burrow is proving to be a worthy nemesis for Patrick Mahomes. The Bengals beat the Chiefs for the third time in the 2022 calendar year, with Burrow completing 6 of 7 passes on the game-winning 53-yard touchdown drive. Ja’Marr Chase returned, but Joe Mixon did not. Samaje Perine rushed for 106 yards in Mixon’s absence. 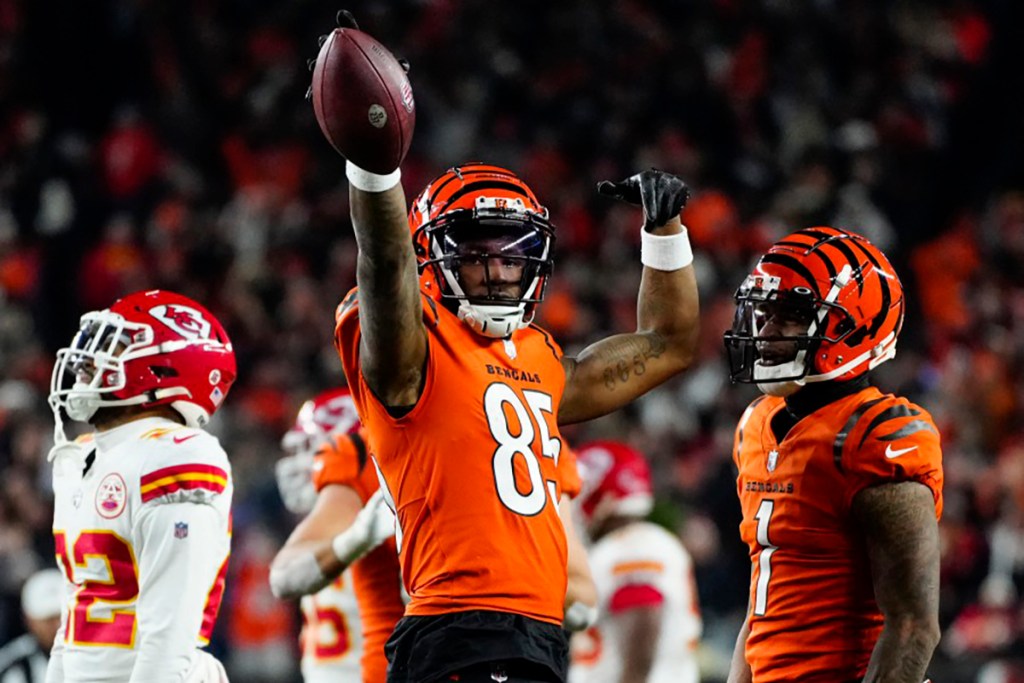 Tee Higgins celebrates during the Bengal’s win over the Chiefs.USA TODAY Sports

Harrison Butker missed a potential game-tying field goal as time expired in a 27-24 loss to the Bengals. The bigger surprise was that Travis Kelce lost a fumble at the end of a 19-yard gain with the Chiefs leading by four points early in the fourth quarter. The loss allowed Buffalo to take the lead in the chase for the No. 1 seed in the AFC playoffs.

Welcome to the Brock Purdy Era. Garoppolo suffered a broken foot in a 33-17 win against the Dolphins. The last pick of the 2022 draft, Purdy didn’t look like a Mr. Irrelevant as he threw for 210 yards and two touchdowns. A dominant defense forced two interceptions that led to field goals and scored a touchdown on a fumble return.

Head coach Mike McDaniels’ first game against the 49ers since spending five years there as an offensive assistant did not go well. Lip readers caught him admitting that he “f–ked up” after burning a first-half timeout. The Dolphins’ streaks of five straight wins and four games with 30-plus points were snapped despite one Tua Tagovailoa-to-Tyreek Hill touchdown bomb.

Tyler Huntley led a 16-play, 91-yard drive (aided by two defensive penalties) that he capped with a 2-yard touchdown run with 28 seconds remaining to beat the Broncos, 10-9. The defense’s 14-game streak of forcing a takeaway ended, but Roquan Smith (11 tackles) had his most-active game since he was acquired at the trade deadline. 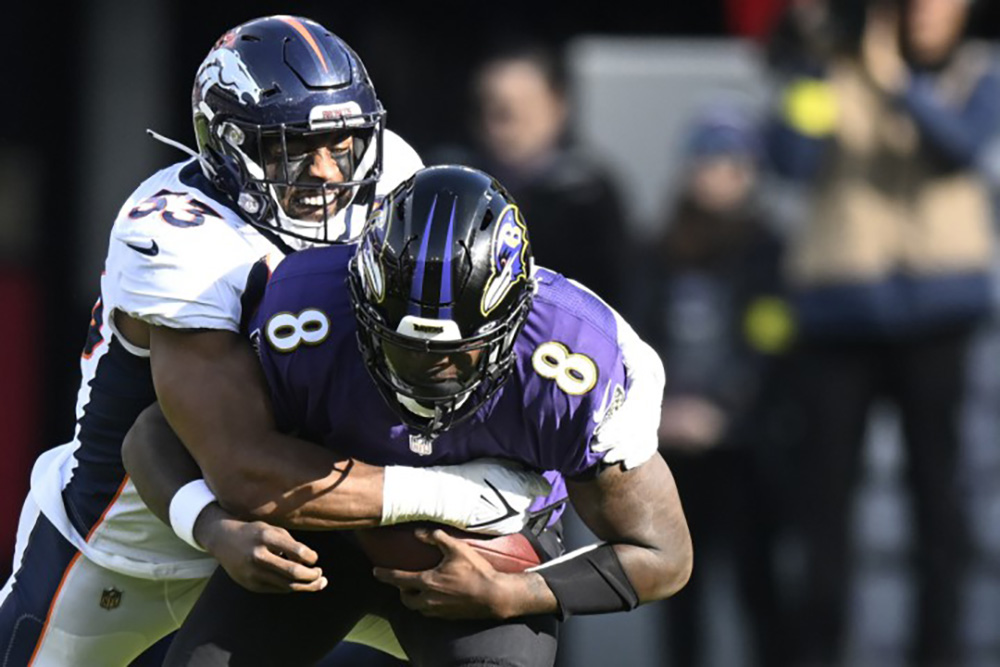 Treylon Burks — drafted with the pick acquired from the Eagles for A.J. Brown — caught a touchdown pass, but Ryan Tannehill (141 passing yards and six sacks) and Derrick Henry (11 carries for 30 yards) couldn’t get anything going. In losing a second straight, the Titans’ last six possessions ended with five punts and a turnover on downs.

Five different players had sacks, including Azeez Ojulari’s that led to a fumble he also recovered. That takeaway set up Daniel Jones’ lone touchdown pass in a 20-20 tie against Washington, which has lost just once in its last eight games. Nearly automatic kicker Graham Gano missed a 58-yard field goal into the wind as time expired in overtime.

One touchdown on six trips into the red zone and three conversions on 16 third downs weighed down all the positives in the loss to the Vikings. Garrett Wilson went off with eight catches for 162 yards, but a late fourth-and-goal throw went to Braxton Berrios and slipped through his fingers. Mike White’s 57 passes are too many for a supposedly run-based offense. Haley Lu Richardson opens up about stalking her...