The truth about the original “Hocus Pocus” is harder to swallow than a witch’s brew containing “a bit of thine own tongue”: It’s a very bad movie.

Well, take another gulp. The new sequel, “Hocus Pocus 2,” out on Disney+ 29 years later, is much, much worse.

Yes, many of us as kids loved watching Bette Midler, Sarah Jessica Parker and Kathy Najimy ham it up as 17th-century sorceresses who were accidentally brought back from the dead. Nonetheless it was a critically panned box-office bomb.

What makes the 1993 film fun for us now is its ’90s baggy-plaid-shirts tastelessness and how seriously it takes itself, even though the movie features a trio of women who were hanged in the 1600s singing a jazzy version of “I Put A Spell On You.” It’s campy. Come Halloween, drag queens venerate the thing like “A Christmas Carol.”

“Hocus Pocus 2” is also awful to the core, but charmless and too low-stakes to keep our interest. Most of the movie is wink-wink references to the old one: In a meta moment, Winifred (Midler) watches a millennial couple as they watch the film on the couch. And the town of Salem puts on a Sanderson Sisters costume contest in which a trio of drag queens from “RuPaul’s Drag Race” beat the genuine article. 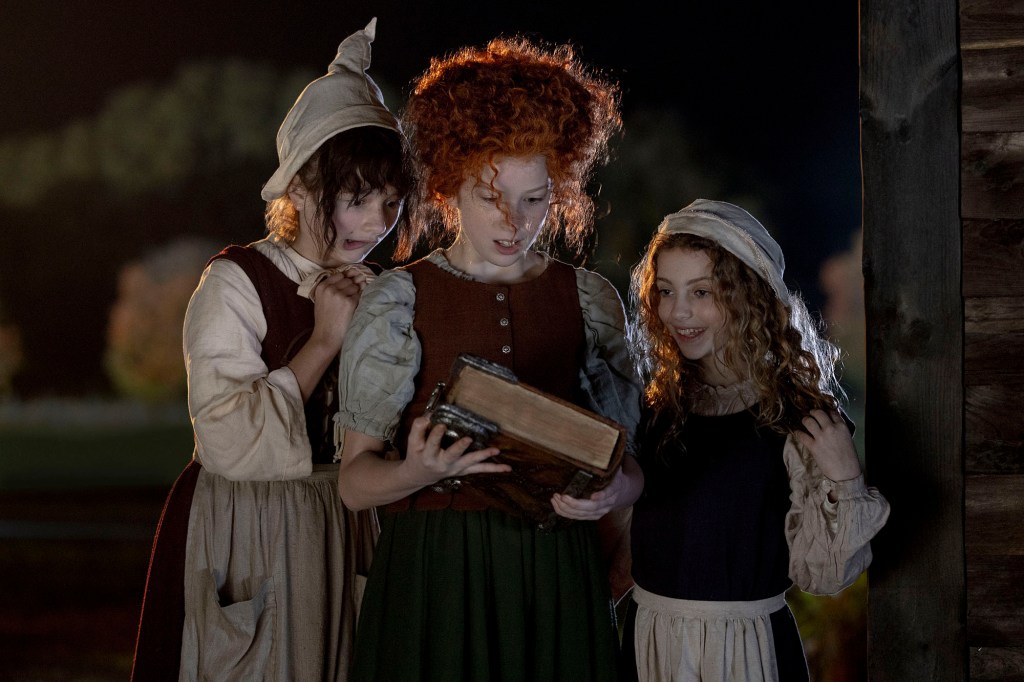 We first meet Winifred, Sarah and Mary as kids in Salem. Matt Kennedy/Disney

The film begins with a nauseating flashback to Winnie, Mary and Sarah’s childhood as Salem outcasts that’s more like a scene from “Nanny McPhee.” One day they flee to the Forbidden Wood (Winnie: “Go to the Forbidden Wood!” Sarah: “But it’s forbidden!”) and meet a witch (Hannah Waddingham) who gifts them her spell book.

It takes 30 minutes of needless exposition before the main attraction finally arrives. 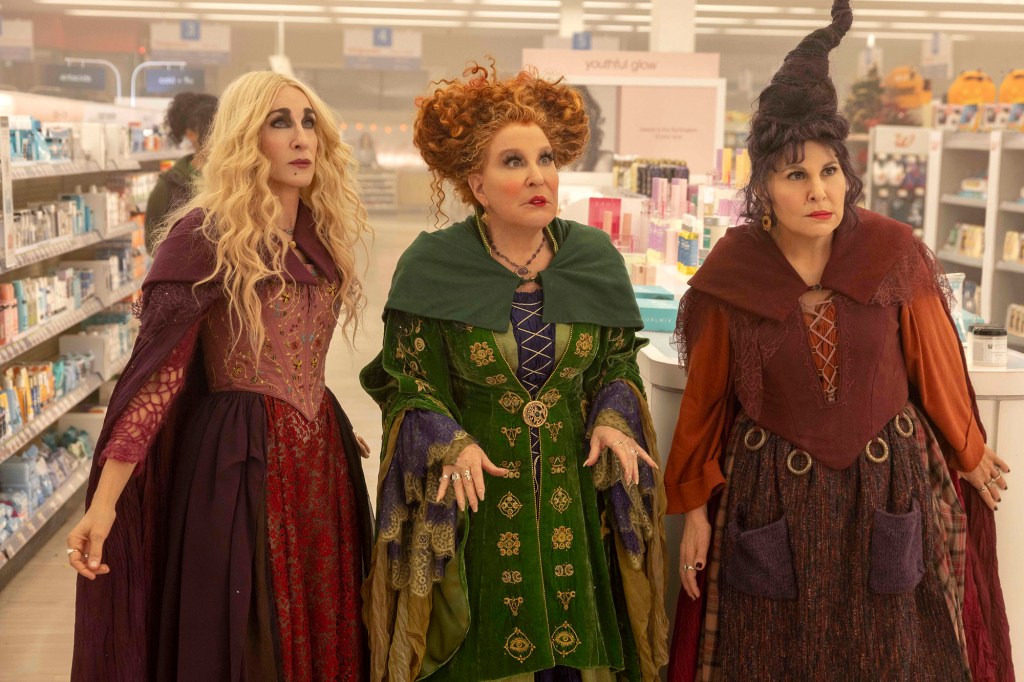 Once it does, we get another witch-out-of-water story. Although they visited the 20th century only three decades ago, the ladies are yet again shocked by our modern advances.

Mary, lacking a room or vacuum cleaner, flies through the sky on Roombas (one per foot).

At a Walgreens, they are petrified by the automatic sliding door and once inside begin drinking lotions that they believe to be children-essence potions. “Retinol,” says one. “Funny name for a child.”

Hearing an Alexa-like device, Mary says, “Winnie, there is a small woman trapped in that box.”

Instead of “I Put A Spell On You,” this time they sing that old colonial hit “One Way or Another” by Blondie.

Director Anne Fletcher’s movie is shtick atop shtick. Putting a pointy hat on a pointy hat. Like witches clinging to life, it gets old. 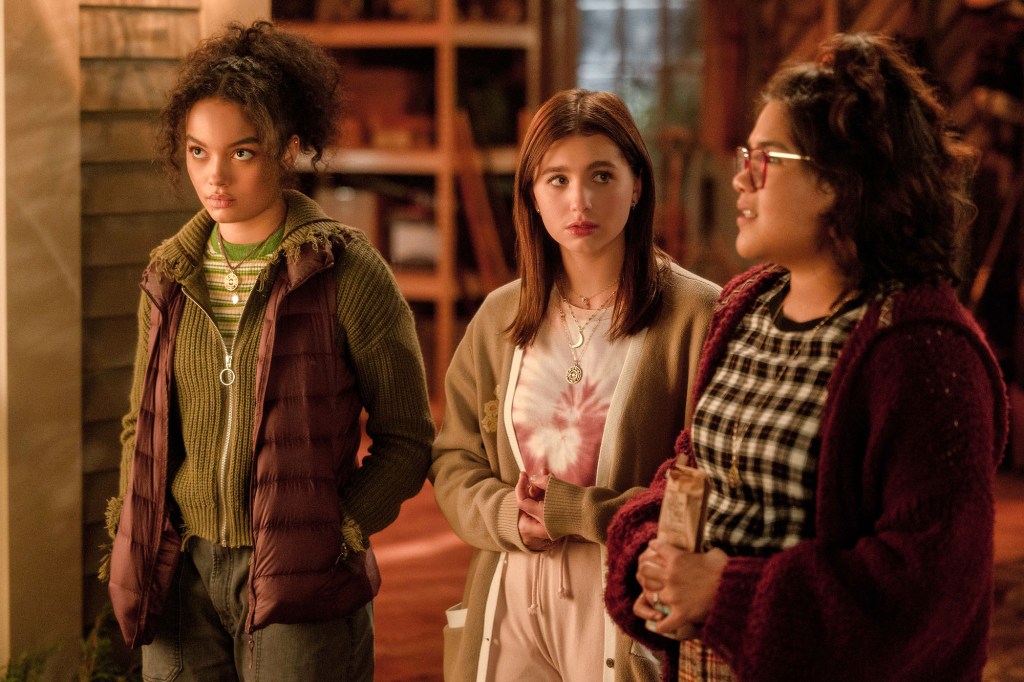 The thrust here, as in the first one, is that Becca and Co. want to send the sisters back to the fires of hell where they belong. The problem is that in this strung-together collection of comic vignettes, there is little urgency to do that.

There’s also a through-line of feminism and the power of sisterhood, which would make sense if this was “The Crucible,” but these are supposed to be real witches who murder children to maintain their youthfulness. Not quite fodder for a redemption story.

Sure, seeing Midler, Parker and Najimy again is nice. They’re amusing as ever — especially Midler, whose eyebrows are Olympic athletes. However, the effect of slapping them in a broad comedy with a threadbare plot is actually far less funny than the original. Often, they’re just awkwardly debasing themselves.

“Hocus Pocus” might have beat the odds — it flopped hard in theaters — and put a spell on us for nearly 30 years. “Hocus Pocus 2,” however, is a slight distraction that won’t endure past October.