Entering his second season behind the Rangers bench, Gerard Gallant has a much clearer understanding of his team and, as a result, the head coach knows exactly where he wants to start when it comes to piecing together his lineup for the 2022-23 season.

“Definitely,” he said Wednesday afternoon when asked if the Rangers can hit the ground running quicker now that he’s more familiar with the club. “They know us a little better, they know our drills a little better — especially the players that played here last year. So it should be smoother, but doesn’t mean it’s going to be any easier.

“We’re going to do our job and try to prepare our team the best we can and get them ready for Day 1.”

Everything is subject to change (and probably will) throughout training camp and the six preseason games, of course, but Gallant sounded definitive while divulging his early framework for line combinations and defensive pairs. Having a full season and three rounds of the playoffs under his belt will do that for a coach in his second year with a team. The acclimation period has long been over for Gallant, who made it clear he is confident in the squad he has. 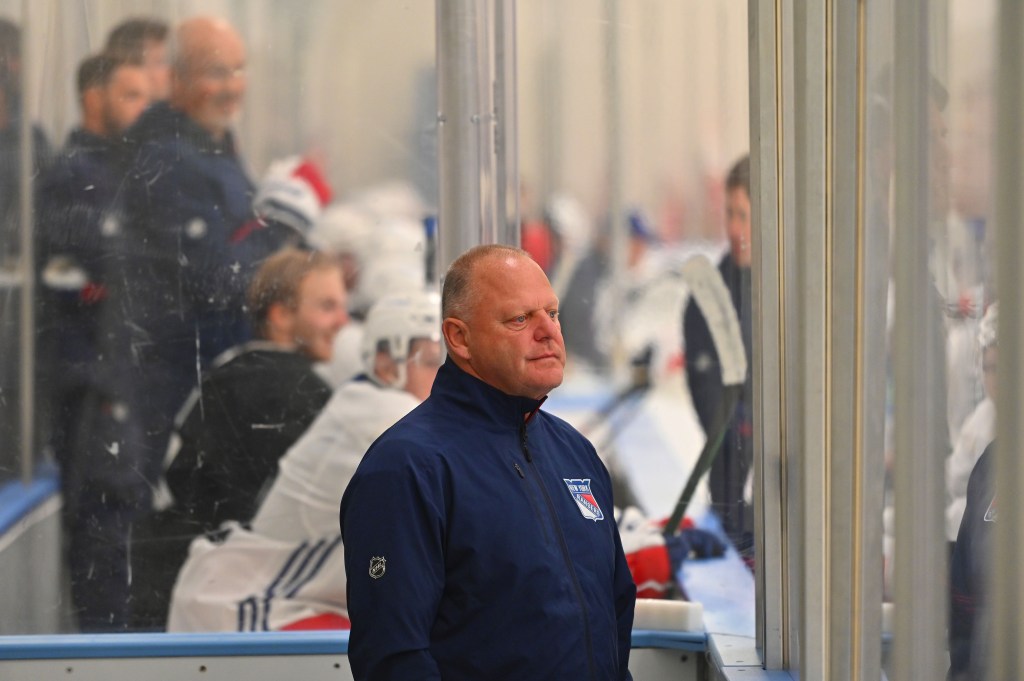 To start, according to Gallant, the Kid Line of Alexis Lafreniere, Filip Chytil and Kaapo Kakko will be reunited after the trio was broken up for the Rangers’ season-ending loss to the Lightning in Game 6 of the Eastern Conference Final. The youngsters spent a lot of time together last season, including an eye-opening performance during a majority of the playoffs.

“They got a ton of experience last year, it was a great year for all our young players,” Gallant said. “They all got better during the season and the playoffs helped them a lot, too. We’ll see what happens this year. This is a new year. They’re a year older. As a coach you’re saying, ‘These players are going to be better this year.’

“Start [Thursday], get it on the ice, get ready for the exhibition games and play well. Be ready for this season. Hopefully, they’re all going to be better hockey players this year because of the run we had last year.”

Vitali Kravtsov will get the first look on the second line next to Artemi Panarin and Vincent Trocheck, who Gallant indicated will take Ryan Strome’s spot on the first power-play unit. Gallant is already familiar with Trocheck after coaching him for parts of three seasons when they were both with the Panthers, but the veteran center was only in his second NHL season when they first met.

On top of highlighting Trocheck’s 200-foot game and ability to contribute on special teams, Gallant noted that the 29-year-old’s overall game has naturally developed a ton since he last coached him.

The second version of the ‘KZB’ line is back as well, temporarily at least. Sammy Blais will start on the right wing of the top unit alongside Chris Kreider and Mika Zibanejad. In the games leading up to his season-ending ACL tear at the hands of the now-retired P.K. Subban early last season, Blais was in that exact spot in the lineup.

While this variation of the top nine can and will probably change, it allows for Barclay Goodrow to slot onto the fourth line and in turn lengthen the Rangers lineup in general. Goodrow, who is coming off a broken ankle he sustained in the playoffs but stunningly returned from in the second round against the Hurricanes, won’t participate in team scrimmages to start but will practice normally.

“He’s fine, he’s skating,” Gallant said of Goodrow, who was a utility player for the Rangers in his first season. “But we’re going to hold him back a little bit from the scrimmage games.”