It is a savvy strategy, if you think about it. Every few weeks, whenever the Giants open the gates at MetLife Stadium, they let Eli Manning walk onto the field at halftime. A few weeks ago, it was to reveal his name and number on the stadium’s ring of honor.

Sunday, he lugged a shiny Lombardi Trophy, his old coach, Tom Coughlin, at his side. Eli puts everyone in a good mood. Eli makes you think about yesterday instead of today, at a time when thinking about today — and tomorrow, for that matter — makes Giants fans want to curl into the tuck position.

Eli makes the boos go away.

At least for a little while.

“Remember, it’s a long season!” Coughlin bellowed during a fiery address on behalf of his old team, one that threatened to bleed past the allotted 13-minute halftime window (not that anyone would have complained). “Becoming a winning team takes a process!”

If Coughlin was trying to recreate one of his A-game pregame or halftime talks from back in the day … well, it wasn’t the most receptive audience. There were a good 20,000 empty seats scattered throughout MetLife, this on a perfect October day, this on a day when there would be this 10-year celebration for the 2011 Super Bowl champions. 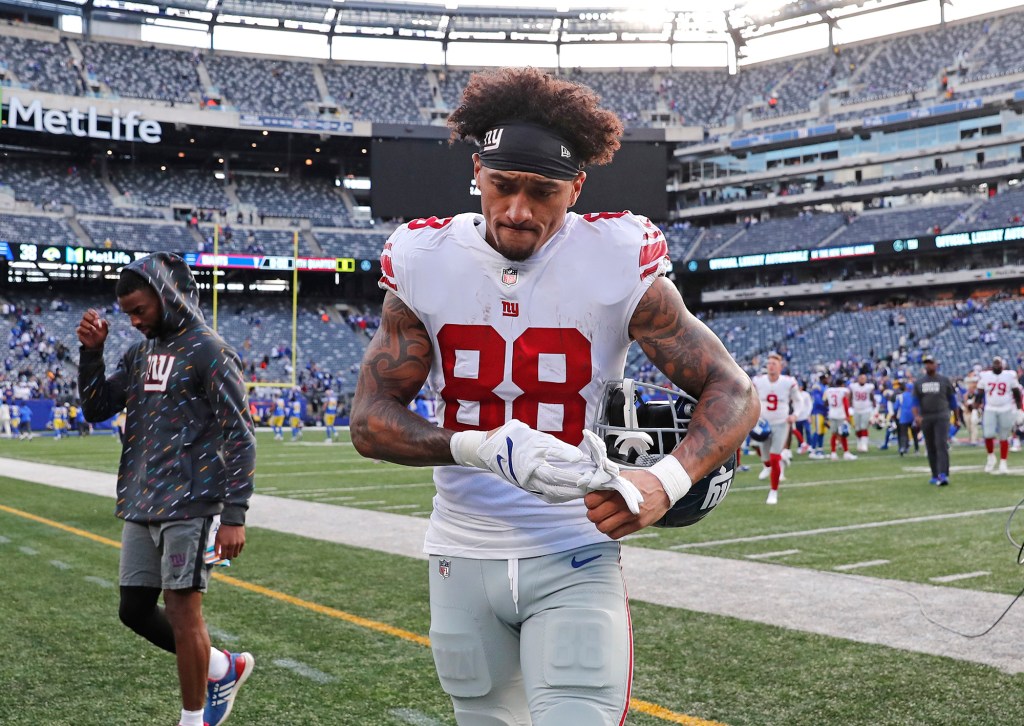 Evan Engram walks off the field after the Giants’ loss to the Rams.Charles Wenzelberg/New York Post

Which was easy to understand.

And the only way you were going to energize the ones who came, the 50,000 or so who stayed for the halftime ceremony, would’ve been by turning back the clock, giving Eli and Justin Tuck and Ahmad Bradshaw helmets and uniforms and activating them for the second half.

Coughlin was on a roll. He wasn’t about to stop until someone dragged him off with a cane.

Unfortunately, the mantra of the 2021 Giants is now: 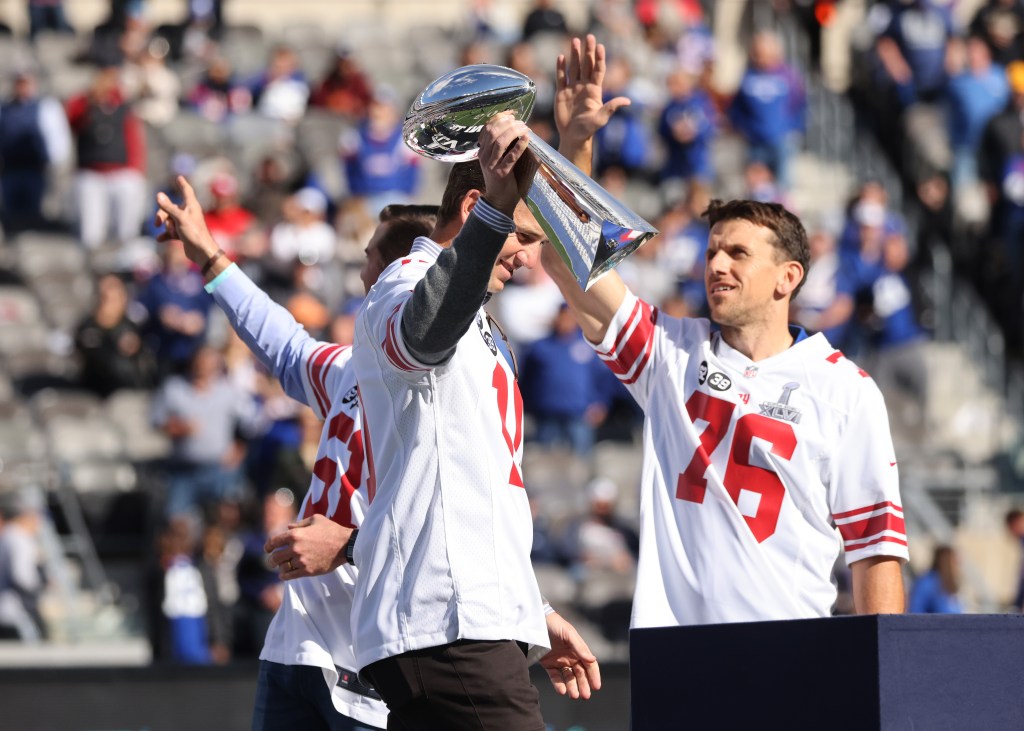 “There’s a lot of things we have to fix,” Joe Judge, the present Giants coach, said after this miserable 38-11 bloodletting was complete. “We’ve got to be better as a team.”

The weekly nostalgia doesn’t do Judge or his team any favors. The Giants, right now, are about as far removed from their championship roots as is physically possible. It feels like it was important to get a good look at that shiny 10-year-old Lombardi Trophy because the next one seems like it’s planted somewhere on the dark side of the moon.

The Giants offered some early hope. For one thing, there is the theory that California teams forced to play 1 o’clock kickoffs — 10 a.m. according to their delicate constitutions — are ripe for sneak attack. And the Giants did attack, moving in chunks downfield until stalling at the Rams’ 8 — a far-too-common coda to too many promising drives.

The next time the Giants sniffed the end zone the Rams had piled on 38 points. The Rams shook off their jet lag and hungrily took advantage of … well, everything: the Giants’ injury-riddled lineup; Daniel Jones’ return to unwanted generosity (three picks, one lost fumble); and their general inability to keep up.

“We have a unified locker room,” cornerback Logan Ryan said. “Despite how it may look.”

No one doubts the Giants’ want-to. It’s their will-do that gets in the way. The Rams are lurking among the elite teams in the NFC. They made the Giants look like a bottom-feeding occupant of the AAC. It was that bad. It was that ugly. 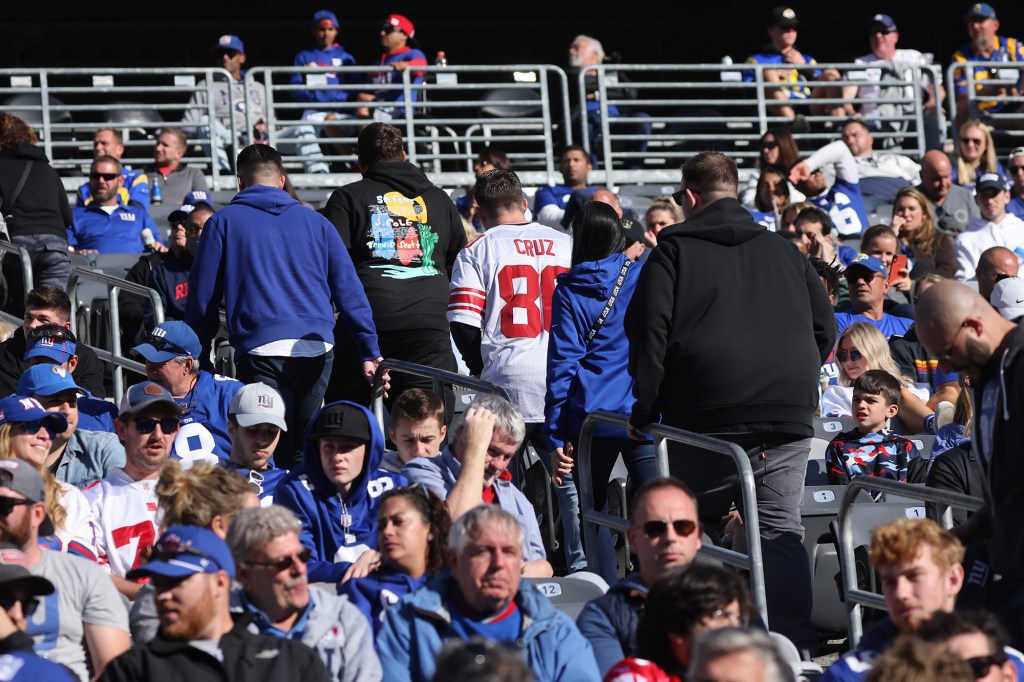 Giants fans leave for the exits early during the team’s loss to the Rams on Sunday.Charles Wenzelberg/New York Post

It was that depressing for those who came, and those who stayed, and those who ultimately gave up the ghost and ran for the parking lot after they finally turned the microphone off on Coughlin.

They know. They were soon to be stuck in traffic on Paterson Plank Road and Route 3, and guess what they were all talking about? Firing the coach. Firing the coaches. Firing the players. Their anger will subside, it almost always does, usually by the time they get back home. The problem is what comes in place of the fury, something we have already seen in abundance after only three fruitless and winless home games.

That’s a whole other kind of mantra.