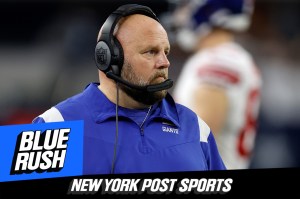 The Giants didn’t have much to work with in Dallas on Thursday. Essentially half their starters were out. They put up a fight, taking a lead into the third quarter, but the Cowboys had too much firepower on both sides of the ball. They got the help on two huge calls from the officials. All of that led to a 28-20 Giants loss to their NFC East rival, dropping their second straight game and falling to 7-4 on the season.

Will the Giants crumble or will they still end up making the playoffs? We answer that and break down the Thanksgiving loss on a new episode of the “Blue Rush” podcast with Lawrence Tynes, Brandon London and me.