Early in the public portion of his Citi Field workday — the pregame press conference — Buck Showalter brought up the fickle forces of fate.

“I always say if you want to make the baseball gods laugh,” he said, “tell them about your plans.”

Showalter brought up those same baseball gods a short time later, unprompted, which inspired this one-on-one question to the Mets’ manager: Do you think they owe you one for the 1994 season in The Bronx, and is this charmed 2022 season in Queens their way of settling the debt?

“No, I owe them, I really do,” Showalter said. “I never had that feeling.”

Maybe he should have that feeling now. At age 66, after a full and distinguished life in the game, Showalter has been gifted a team that gives him his best chance to win a championship since his ’94 Yankees were denied their shot by a labor conflict that wiped out the postseason.

Those Yankees had the best record in the American League at 70-43, a 6 ½-game lead in the AL East, and enough talent and chemistry to match up with the National League’s best — Felipe Alou’s 74-40 Montreal Expos. Paul O’Neill was hitting .359, Wade Boggs was hitting .342 and Jimmy Key was the only pitcher in the bigs with 17 victories. 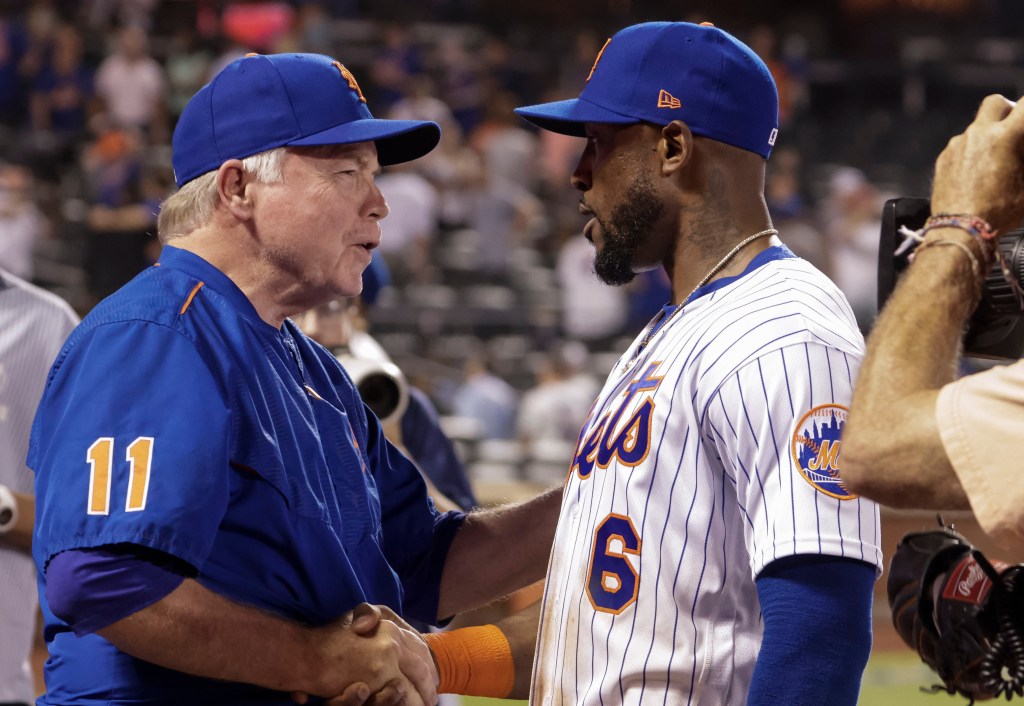 Buck Showalter celebrates with Starling Marte after the Mets’ 6-2 win over the Reds.Corey Sipkin

“It was a great-pieces team,” Showalter recalled Tuesday, before his Mets beat Cincinnati, 6-2, for their 14th victory in their last 16 games. “All the pieces fit. Everything fit.”

I reminded him that in a Phoenix office building in February 1996, after he’d been forced out by George Steinbrenner and hired by the expansion Diamondbacks, he’d told me the following: “We would’ve won it all.”

Showalter paused for a second before responding, “Yeah, we had it going on.”

At least until the commissioner of baseball canceled the season and an annual October tradition that even World War II couldn’t shutter.

Showalter got a call from his general manager, Gene “Stick” Michael, who had helped rebuild a club that had lost 273 games in the three years preceding Showalter’s 1992 arrival to the manager’s office.

“I remember there was a long silence on the phone between the both of us,” the manager recalled. “Stick and I were both feeling the same thing. We both knew that so many things can change from one year to the next, and that we might not get another opportunity.”

Showalter was fired the following year after losing a classic five-game playoff series to Seattle. He would take Arizona to the playoffs once, and the Orioles to the playoffs three times, but never reach the World Series. 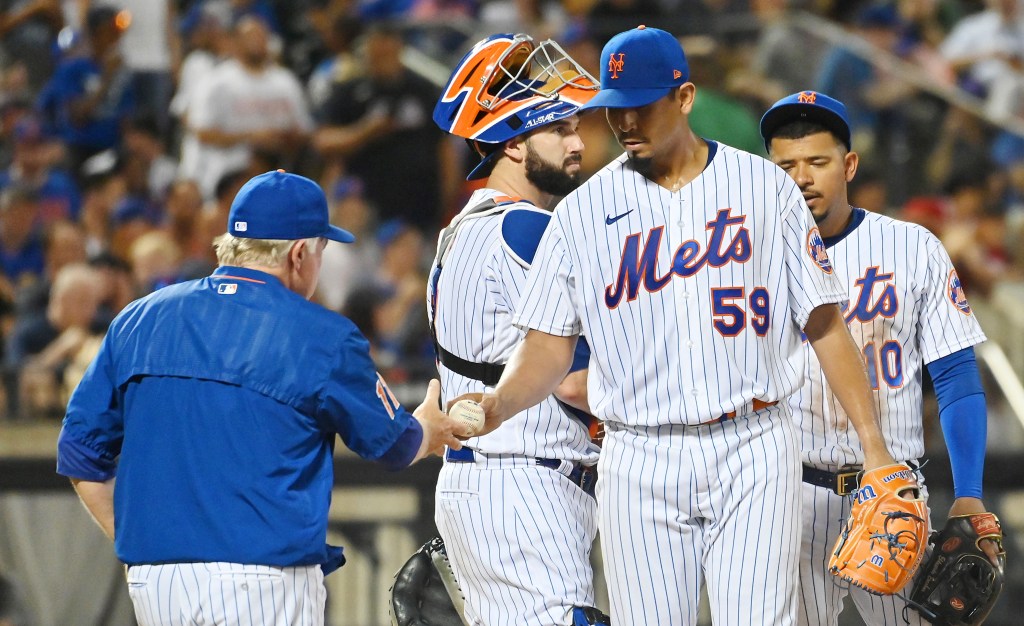 Buck Showalter takes out Carlos Carrasco in the seventh inning of the Mets’ win. Robert Sabo

Until this coming fall, perhaps.

The Mets still have to put away the NL East, and still have to deal with the Dodgers down the road. But the return of a dominant Jacob deGrom now makes them look like a credible threat to book their first ticker-tape parade since 1986.

DeGrom, Max Scherzer, and Edwin Diaz give Showalter three all-world arms that might even be too much for the Yankees to handle, and Pete Alonso and Francisco Lindor are having huge years. Referring to the team’s harmony in May, Showalter told The Post, “This might be the best group I’ve ever had.”

Before Carlos Carrasco secured his 13th victory on a rain-delayed Tuesday night, Showalter cited his players’ everyday approach as his greatest satisfaction in this 72-39 season.

“Just the way the guys have embraced playing the game,” he said. “It’s been fun to watch. It’s been fun to be around them. There’s a lot of guys here [that] if I wasn’t managing, I’d like to hang out with.

“There are a lot of baseball players here, and they’ve really embraced … a lot of things that winning teams have to do to win.”

As my colleague Larry Brooks pointed out, Showalter is the one most responsible for this culture change. He is the undisputed star of this team. It’s easy to see that the Mets are playing for their manager as much as they are playing for one another, and that the old man is having a blast.

“I love these guys,” Showalter said. “They don’t take themselves too seriously, and if they do they will police themselves.

“I think they also realize they are being scrutinized, so they think about the weight their words carry. They don’t do things callously that puts their teammates or organization in a bad spot. There are things that went on in the past that they’ve learned from.”

The same can be said of Showalter, who started out as a minor league player 45 years ago and has learned a ton ever since. A solid 99.9 percent of Mets fans wanted him hired for his know-how, and so far this has been a dream marriage.

Buck’s best team, as it turned out, never got a shot at a parade. Twenty-eight years later, maybe the baseball gods are finally ready to make it right.