The Sunday night lineup reflected where the Yankees are in the standings and the schedule.

They had won six straight, including all five on the homestand, going into a series finale against the Red Sox. That enabled the Yankees to re-open the AL East lead to eight games even with the Blue Jays’ victory earlier Sunday. A three-game series loomed in Toronto in which any Yankees triumph would seal the division (a single victory over the Blue Jays would give the Yankees the season series, which determines who wins the division in case of a tie and one win would assure Toronto could finish no better than in a tie).

So, Aaron Judge was again installed at leadoff, but was the designated hitter as, with 60 homers, he continued his pursuit of at least Roger Maris’ AL/Yankees homer record of 61. Josh Donaldson, Isaiah Kiner-Falefa and Giancarlo Stanton did not start. Oswaldo Cabrera hit cleanup, Aaron Hicks played left, Marwin Gonzalez third and Oswald Peraza short.

Brian Cashman insisted that this was not the beginning of tryouts for how to construct the positional part of a postseason roster.

“We haven’t gotten that deep in the weeds on that,” the Yankees general manager said.

But breadcrumbs are being dropped. For example, we may not know how many homers Judge will finish with in the 2022 regular season. But he seems set to be the leadoff-hitting right fielder in the playoffs. Judge batted first for the 14th straight game Sunday. Harrison Bader started in center for the sixth time in seven games since returning from plantar fasciitis in his right foot. 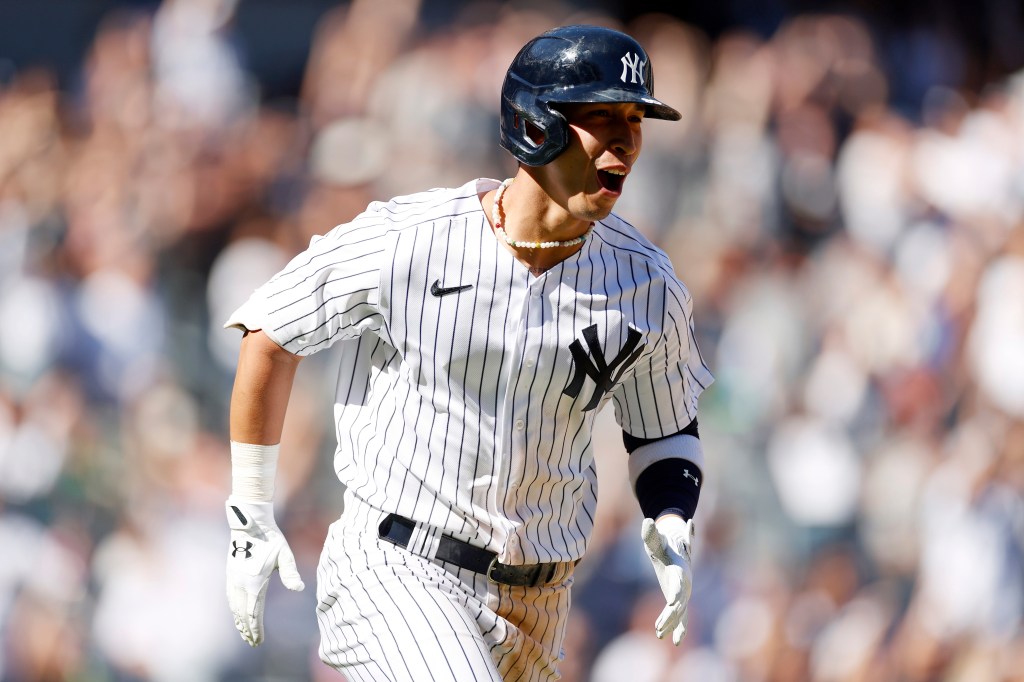 Bader told The Post that he is gaining more and more confidence in what he could do on the foot with each game. His performance is reflecting why the Yankees were willing to sacrifice Jordan Montgomery to land Bader at the deadline. He has been good at the plate and on the bases, but the Yankees particularly valued what he could bring to an already strong defense and Bader has done that while moving Judge back to right where he is elite.

If you hadn’t noticed, after yielding one run in 25 ²/₃ innings in his first four Cardinals starts, Montgomery has a 5.34 ERA in the subsequent six with an .871 OPS against.

Bader is playing. To get others back, the Yankees have two advantages nearby. A division winner will have five days off from Oct. 6-10 before beginning a division series on Oct. 11. But in the AL there are other off-days both Oct. 12 and Oct. 14.

Thus, the Yankees get an extra period to get players such as Andrew Benintendi, Matt Carpenter and DJ LeMahieu healthy before beginning the playoffs — though Cashman surprisingly threw open the possibility that Carpenter (fractured foot) could return for the season-closing four-game series against the Rangers; a surprise because Carpenter still arrives to the clubhouse in a walking boot and has a noticeable limp without the boot.

The extra off-days also could motivate the Yankees to go with 12 (rather than 13) pitchers and 14 position players. That could increase the likelihood of carrying a bat only off the bench such as Carpenter and/or a speed player such as Tim Locastro, though I heard Tyler Wade (who has not yet played for the Yanks this year) also could be in play.

LeMahieu (toe) may not return from the IL before the Yankees complete the series on the harsh turf of the Rogers Centre. He knows this is going to be about pain tolerance. With it being revealed Sunday that Don Mattingly will not return as Marlins manager next season, he was on my mind and I mentioned to LeMahieu that in 1995, with the Yankees in a playoff chase late, Mattingly decided to just let loose and if his chronic back didn’t hold up, so be it. LeMahieu agreed he would soon be in the same place — just going for it and whatever is, is.

As for Benintendi (hamate), he likely would get his left field job back if he can return. Yet, both Hicks and especially Cabrera have been playing well of late. In the previous 12 games before Sunday, Cabrera was hitting .310 with four homers, all from the left side. Cabrera’s OPS from the left side since Sept. 10 was 1.090, only Houston’s Yordan Alvarez and St. Louis’ Lars Nootbaar were better. 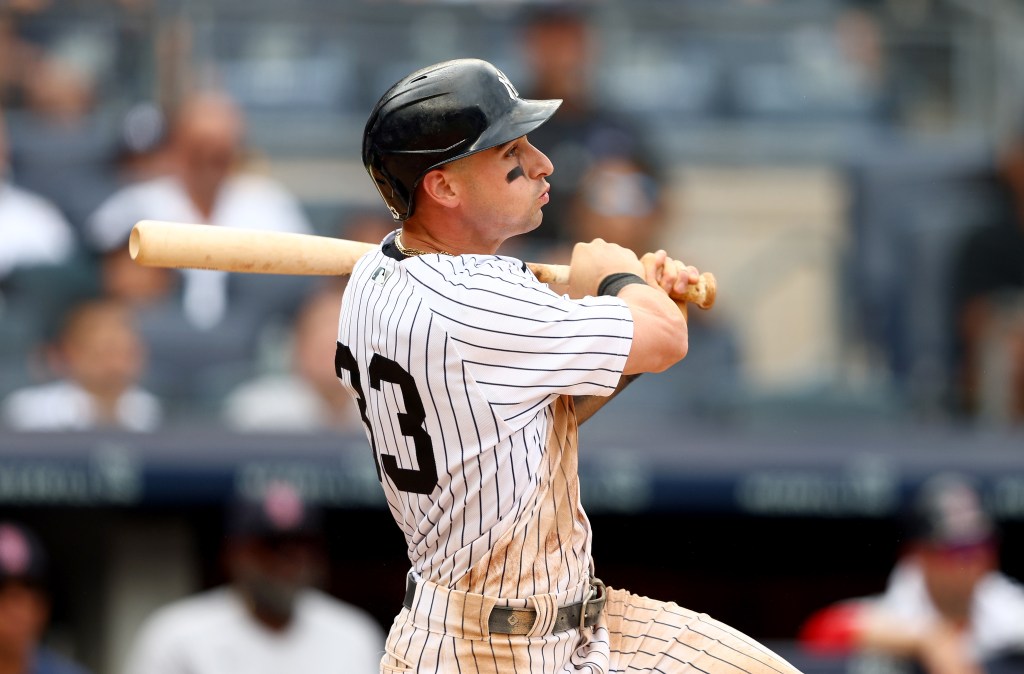 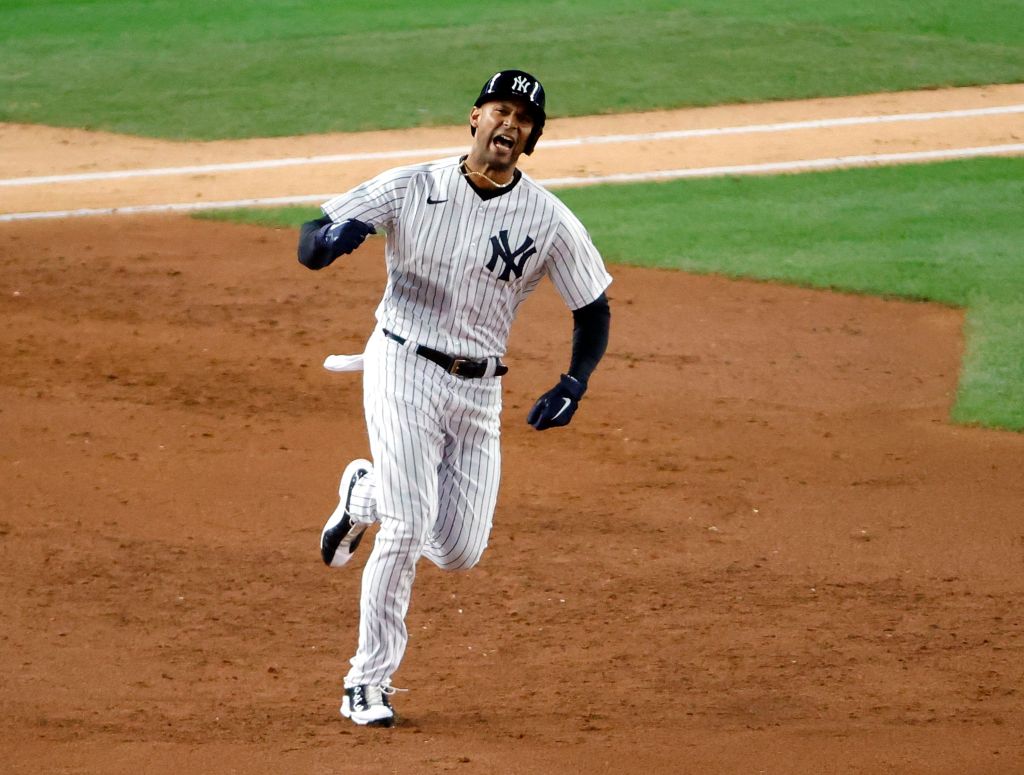 That plus versatility probably has sealed a postseason roster spot for Cabrera whether he starts in left or not. That would mean 10 secure roster spots: Bader, Cabrera, Donaldson, Judge, Kiner-Falefa, Stanton, Gleyber Torres, Kyle Higashioka, Anthony Rizzo and Jose Trevino. Benintendi, Carpenter and LeMahieu are in play to bring it to 13. If there is a 14th, is it Locastro? Hicks? Marwin Gonzalez? Peraza? Wade?

Once they clinch the AL East, the Yankees will have about a week worth of games to experiment plus they can have simulated games in that five-day gulf until the division series. There is still a lot for the Yankees to determine — beyond how many homers Judge hits.