His human, Janeda Banelly, said the title was a well-deserved honor for the senior canine with a signature silver tuft and an askew tongue.

“I believe that this humble soul is also being an example, in subtle ways, to help humans realize that even old dogs need love and a family too,” Banelly, who adopted Mr. Happy Face from an Arizona shelter in 2021, told “Today.”

The win garnered the Flagstaff, Arizona, native $1,500 and an appearance on the aforementioned show with her mirror-shattering mutt.

Mr. Happy Face beat out eight other contenders, including a canine that resembled a mandrill baboon and a “hairless mutant” with a Picasso-esque face. He also took top honors over a Pekingese named Wild Thang that evoked the fictional Tribble species from “Star Trek.” 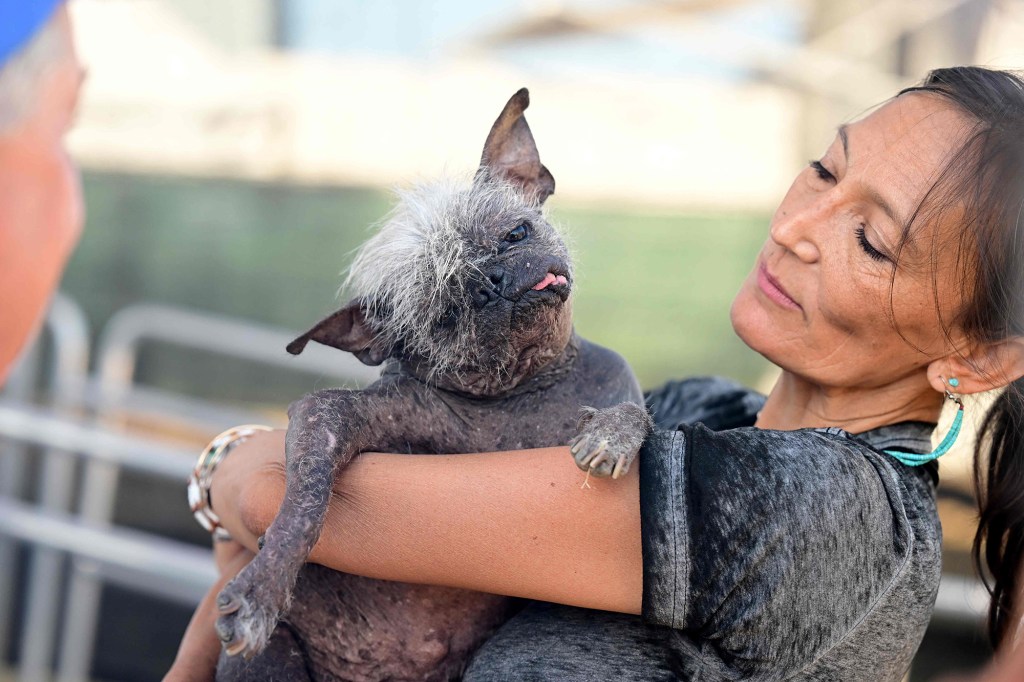 Janeda Banelly rescued Mr. Happy Face from a shelter in 2021. A survivor of a hoarder home, the poor pup experienced abuse and neglect at the hands of his previous owners, as well as myriad medical conditions, including cancer.AFP via Getty Images

“It was clear and obvious Mr. Happy Face deserved to be champion,” Debra Mathy, one of the competition’s judges, told the New York Times. The eyesore-honoring contest, which has been around for 50 years, went down Saturday after being suspended in 2020 and 2021 due to the pandemic. 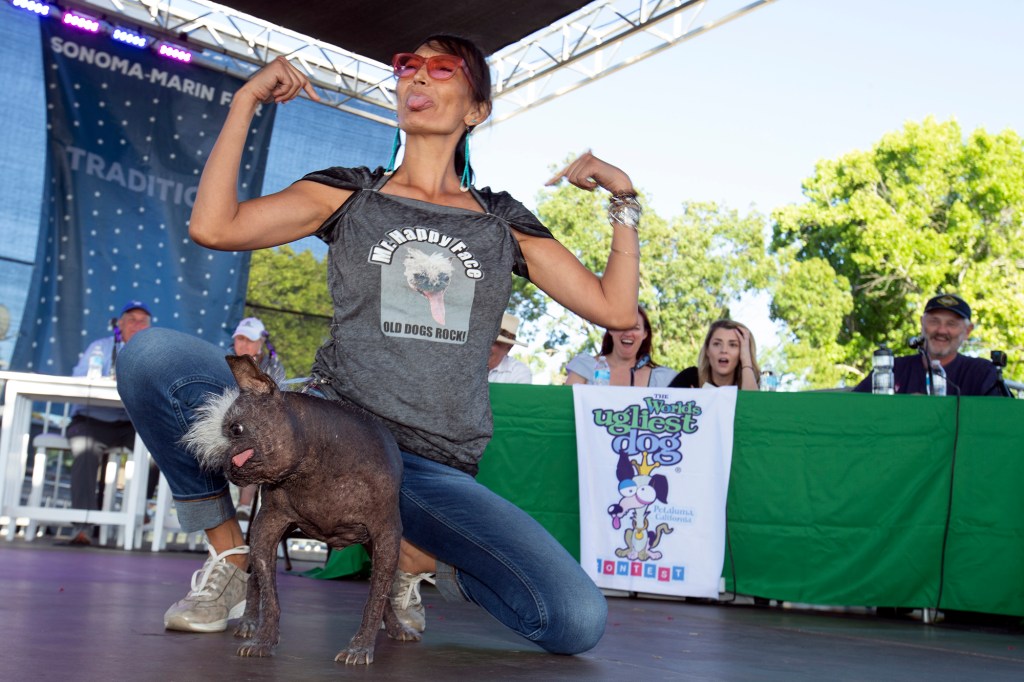 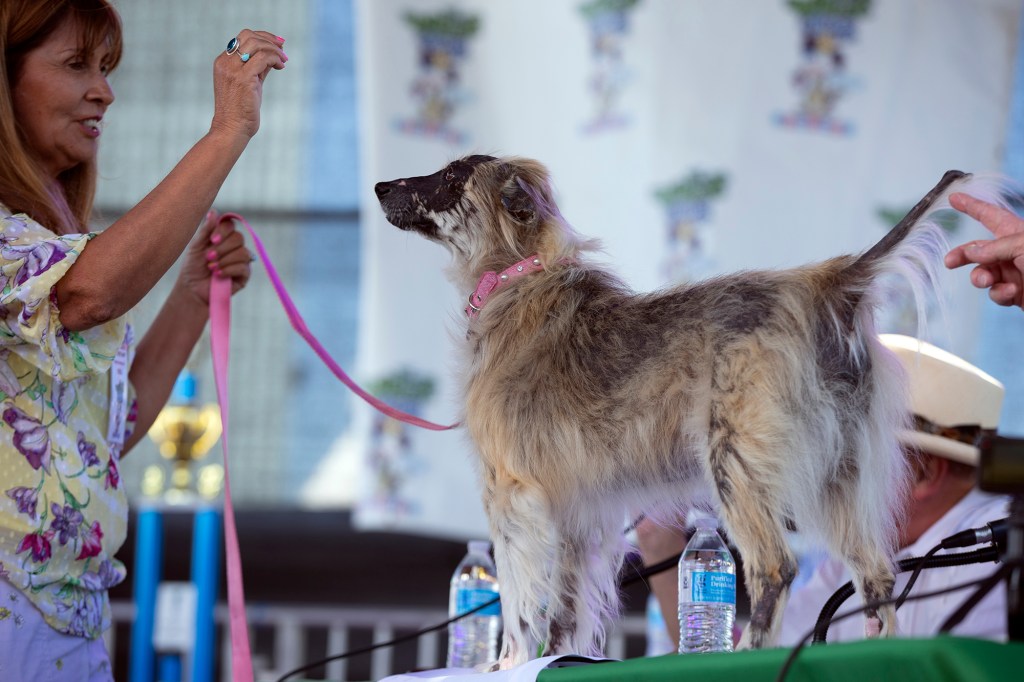 Morita, a Mexican hairless, takes a treat from handler Yvonne Morones while standing on the judges’ table at the World’s Ugliest Dog Contest.AP

It might seem cruel to poke fun at the aesthetically bereft, however, the World’s Ugliest Dog Contest wrote on its website that it “promotes the adoption of dogs, even ones that might have missing fur, crossed eyes, duck waddles or mismatched ears.” Indeed, nearly all the contestants were rescued from puppy mills or shelters.

It hasn’t been an easy road for Mr. Happy Face. A survivor of a hoarder home, the poor pup experienced abuse and neglect at the hands of his previous owners, as well as myriad medical conditions, including cancer.

Banelly said she was told at the time that her pride and joy, who is possibly also inbred, might have only one month to live due to the fact that he was an old dog that required lifelong medication. 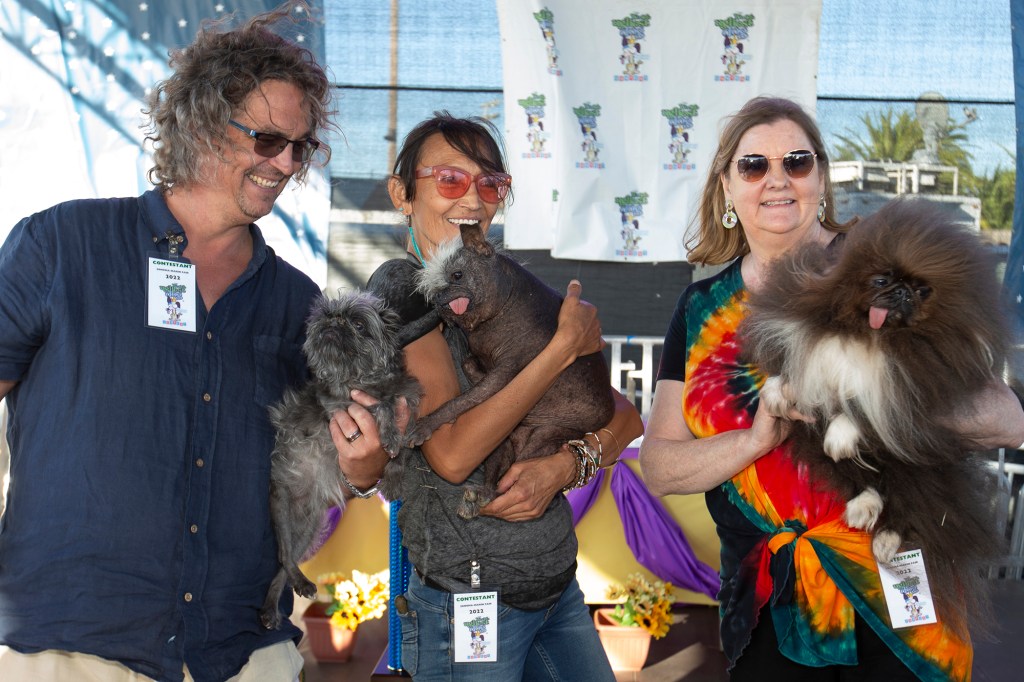 Scotch Haley of Pleasant Hill, California (from left), with his dog Monkey, Janeda Banelly of Flagstaff, Arizona, with her dog Mr. Happy Face, and Ann Lewis of Coos Bay, Oregon, with her dog Wild Thang, are the winners of the 2022 World’s Ugliest Dog Contest.AP 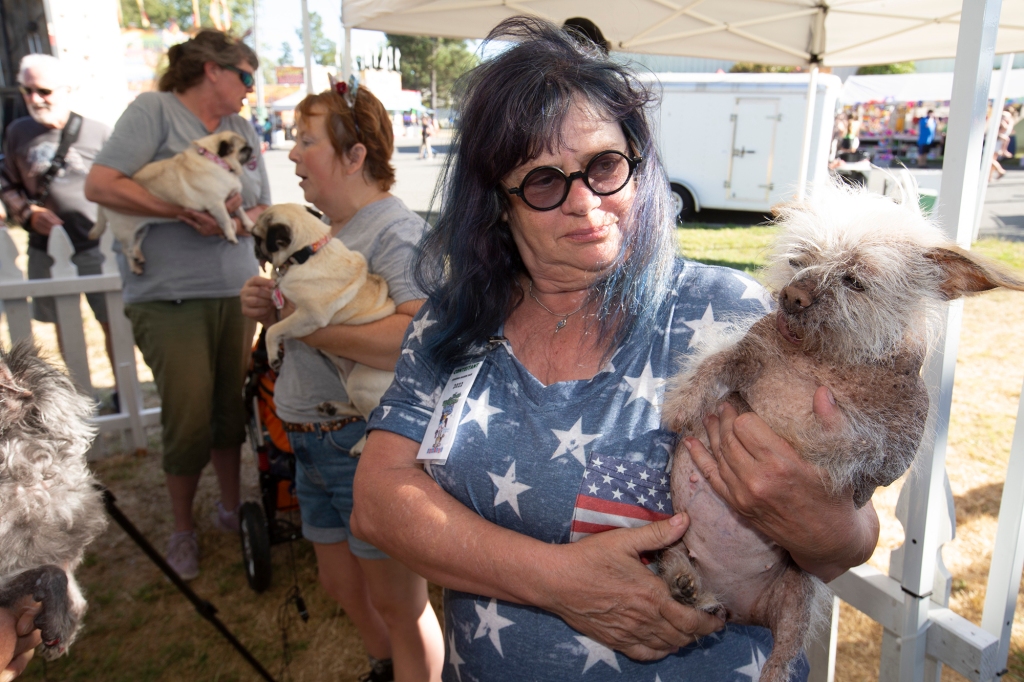 Canine contestants and their handlers await the start of judging at the World’s Ugliest Dog Contest in Petaluma, California. AP 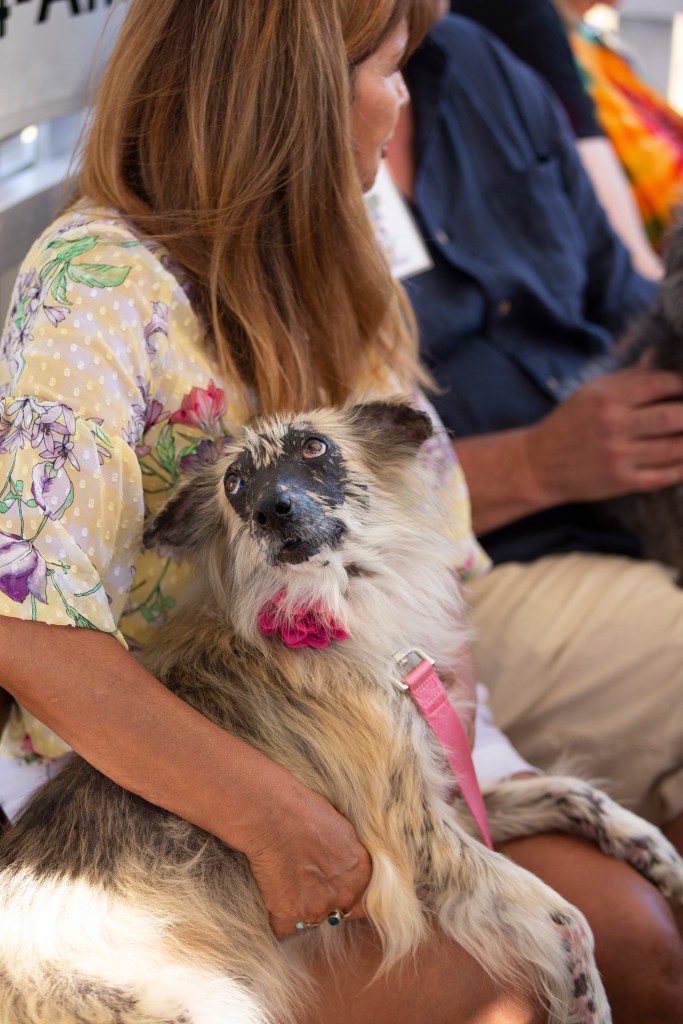 Mr. Happy Face, 17, beat out eight other contenders, including a canine that resembled a “mandrill baboon,” a “hairless mutant” with a Picasso-esque face and a Pekingese named Wild Thang that evoked the fictional Tribble species from “Star Trek.”AP

“I vowed that day, he would be so loved that he would never remember how awful his previous life had been,” Banelly wrote of her fugly fur baby, who was already made it an incredible 10 months, shattering all expectations.

The last World’s Ugliest Dog Contest title-holder, pre-COVID-pandemic restrictions in 2019, was Scamp the Tramp, a googly-eyed pooch with dreadlocks who reportedly liked to dance to Bob Marley. 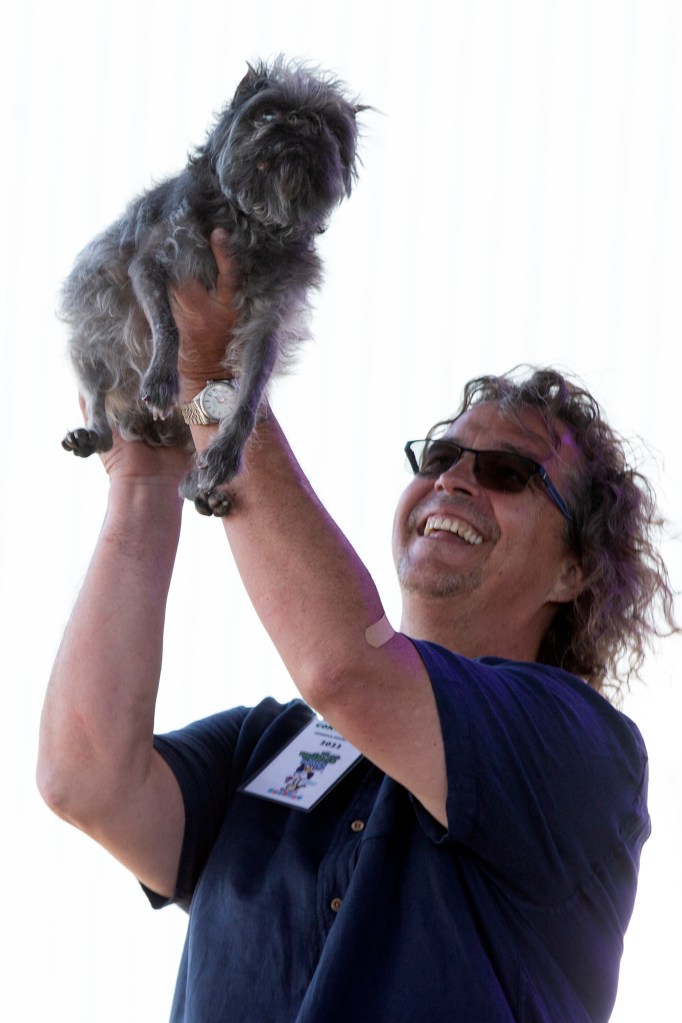 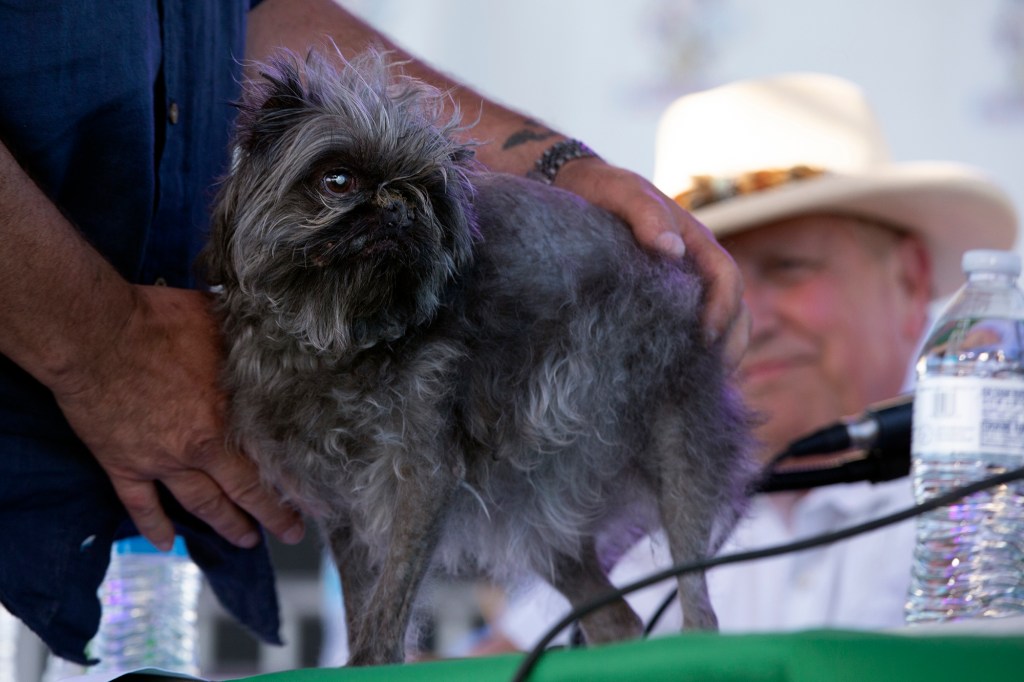 Monkey, a dog from Pleasant Hill, California, is scrutinized by the judges at the World’s Ugliest Dog Contest. AP 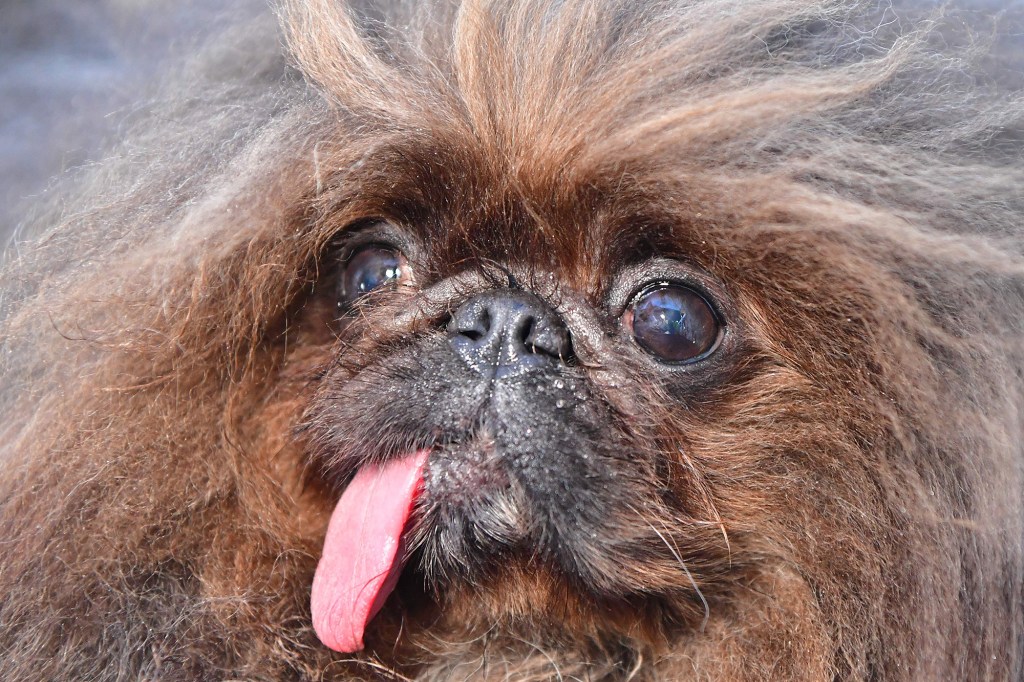 Wild Thang looks on before the start of the World’s Ugliest Dog Contest.AFP via Getty Images 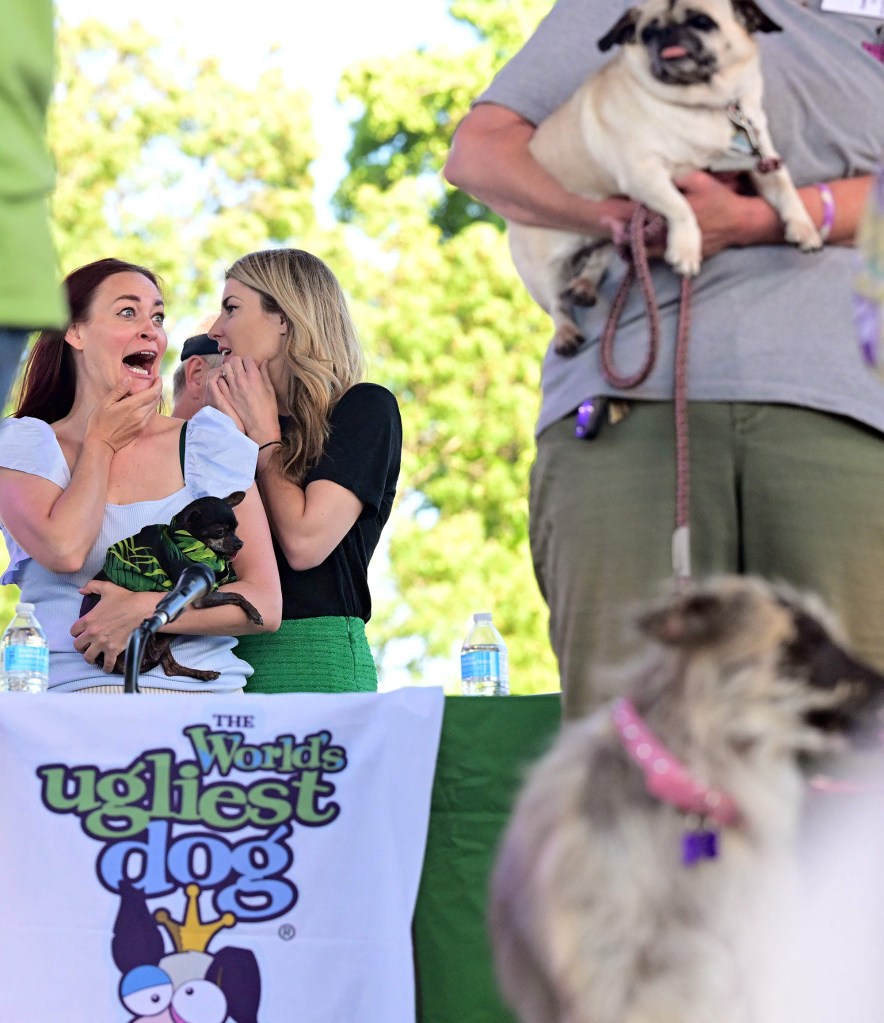 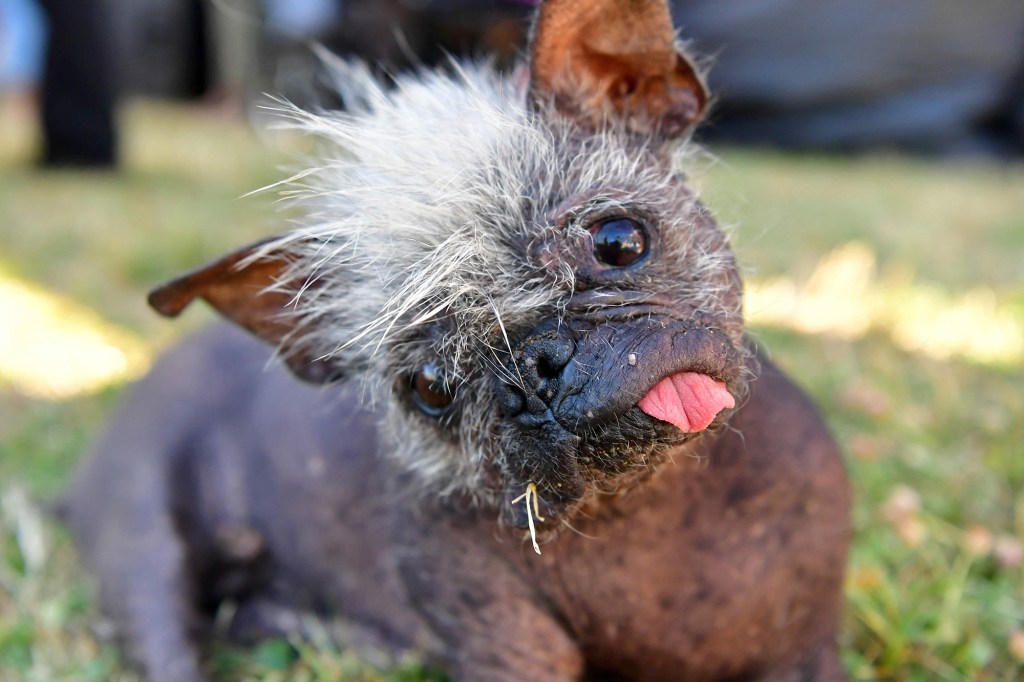 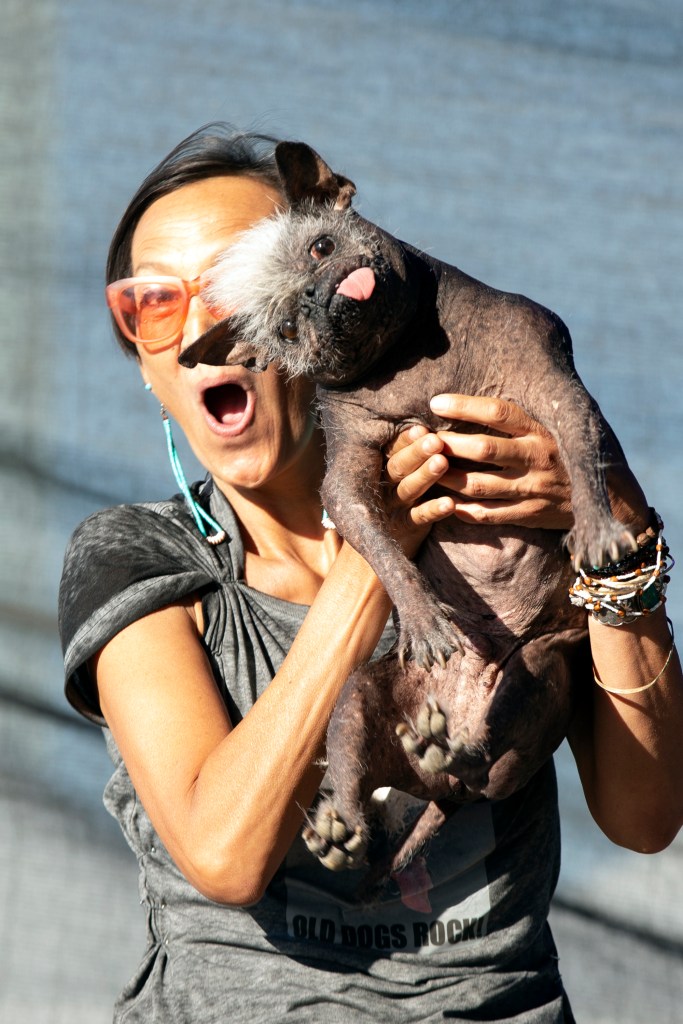