SUNDAY AM WRITETHRU after Saturday AM post: Doctor Strange in the Multiverse of Madness had a great fall in its second weekend, down -67% for a Disney-reported $61M take (rivals are seeing $60M, -68%).

While that drop is akin to the second weekend declines of recent MCU titles, the uber-successful Spider-Man: No Way Home (-67.5%) and Black Widow (-67.8%), know that all these percentile plummets are not equal. Doctor Strange 2 ranks among the MCU’s biggest second weekend box office drops which includes Black Widow, No Way Home and 2003’s Hulk (-70%) (the latter was executive produced by Kevin Feige, though not part of Disney’s Marvel).

Doctor Strange 2‘s second weekend decline simply rests on bad word of mouth; the sequel receiving a back-to-back meh grade from CinemaScore for an MCU movie, B+ to Eternals’ B back in November.

All of this should be a splash of cold water in Marvel’s face as they go crazy exploiting IP between features and streaming Disney+ series.

Now, we made a lot of hay about Disney/Marvel’s Black Widow‘s second weekend drop back in July; that the pic’s release was impacted by a theatrical Disney+ PVOD day-and-date strategy, plus piracy. That argument still stands, rock solid. Not to mention, witness the immense amount of money that Doctor Strange 2 opened to at $187.4M when it was exclusively available in theaters compared to Black Widow‘s $80.3M back in July.

But what about the third highest grossing movie ever at the domestic box office ($804.66M), Spider-Man: No Way Home, and its second weekend fall? Why did that movie tumble? That beloved sequel’s decline was strictly due to Christmas Eve (a low traffic moviegoing day) falling on Friday, and the fact that the Jon Watts-directed movie was making money hand over fist during its weekdays, it’s first midweek grosses ranging from $28.8M to $37M per day. Note, Doctor Strange 2‘s fall this weekend doesn’t have anything to do with a slow traffic moviegoing day. 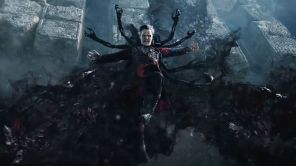 However, yesterday afternoon, it finally hit me in the face that the bad word of mouth on Doctor Strange 2 and that B+ grade were taking its toll; that a Batman v. Superman factor was in effect (another B graded, -69% second weekend decline comic book title). This occurred when my jaunt to Bed, Bath and Beyond was interrupted by a phone call from my cousin Vinny in the Bronx, a guy who is a very passionate MCU fanboy and fits tracking’s definition of being a frequent moviegoer watching at least 3 movies a month. Typically, such phone calls on a Saturday are from box office sources complaining about my analysis, or trying to whisper that Moonfall was in the black.

Vinny is also the type of moviegoer who shows up to an MCU movie on a Thursday night at Lincoln Square and buys his tickets in advance. He’s definitely not wasting his time seeing Doctor Strange 2 a second time, which is an anomaly for him.

“I’m going around telling everyone I know to avoid Doctor Strange 2,” Vinny complained (Marvel/Disney calm down; my cousin isn’t a social media influencer). 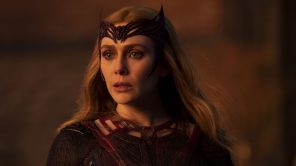 Vinny unloaded: “It’s a two-hour season finale to WandaVision. I expected more from Sam Raimi; what’s going on here? They set-up this whole multi-universe thing and then re-set it by the end of the film. Where do we go from here? Thor: Love & Thunder is going to be a comedy. And what’s with killing all those great cameos in the middle? That was senseless in addition to Charlize Theron’s stunt casting at the end; why should we care? The entire phase 4 has been completely random movies. Black Widow, Shang-Chi, Eternals have nothing to do with setting up anything. They have no set plot in mind. My head hurts just thinking about it.”

Marvel, I did defend that Disney+’s Secret Invasion, Loki season 2 and Ant-Man and the Wasp: Quantumania are on the horizon in regards to building out the multiverse. However, Vinny’s not alone in the lackluster reception to Doctor Strange 2.

“The movie has to be loved and enjoyed enough to want to see it a second time,” said Kentucky-Delaware exhibition boss Rick Roman to Deadline this weekend, “My moviegoers feel the film is not good enough to see again.”

Also potentially triggering lower grosses for Doctor Strange 2 this past weekend is the fact that exhibition, per EntTelligence, downsized the available seats for the film by over 17%, meaning less showtimes. Many of the shows that were lost were in the daytime (which is when cheaper ticket pricing is in effect). With less shows at a lesser price, the national average falls. Doctor Strange 2 according to EntTelligence clocked 4.5M admissions to last weekend’s 13.5M, also a 67% decline.

Some more statistical proof that second trips to Doctor Strange 2 were curbed can be seen in the Comscore/Screen Engine PostTrak exits: 27% said they plan on seeing Doctor Strange 2 a second time, below the 36% who said they were seeing No Way Home again and 34% for Shang-Chi. Those polled after watching Eternals also weren’t over the moon forking over money again to see that film at 22%.

Social media analytics firm RelishMix provided an updated pulse on what was being said about Doctor Strange 2 heading into weekend 2: “Exit chatter for Doctor Strange 2 swings mixed-positive — from adoration of the visual experience of cinematic joy, fight scenes, to threads about Wanda, Spider-Man, dream-walking, the Illuminati, and Sam Raimi’s director masterwork — to deep critical MCU discussion about storylines that may have jumped the shark and high expectations from the trailer to the actual film.”

Recently, I was told by one distribution source that when a movie keeps missing its projection calculations during the course of a weekend, i.e. some rivals saw Doctor Strange 2 by Saturday AM a week ago with a $200M start before descending to $187.4M; that falloff is all because bad of word of mouth is sinking in.

True, at Doctor Strange 2‘s opening level and its second weekend drop here, it’s like complaining about the distance of a Mike Trout homerun. 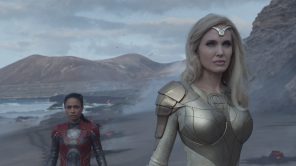 Still, all of this should speak truths to Marvel and Kevin Feige’s power. Something is clearly off in the development of the movies of late (and Moon Knight didn’t exactly shine bright. Also Samba TV didn’t report any viewership for the finale, which typically means it was bad). This could possibly have to do Covid and the factory runway, and which MCU projects are coming down the pipeline first (Doctor Strange 2 scribe Michael Waldron told Deadline’s Hero Nation that at one point while he was writing the screenplay, he expected the sequel to be released before Spider-Man: No Way Home, thus kicking off the multiverse concept. That didn’t happen). Feige and Marvel have relied on friends and family test screenings (which I hear counts some fanboy media influencers in its mix), and have constantly had a philosophy of “plus-ing” (an old Walt Disney rule of thumb); and that at any given point in time during any movie’s production, it’s the worst the studio ever made.

Well, Marvel, it’s time to take the “plus-ing” and testing to a whole other stratosphere. Maybe include some average folks from the flyover states and stop worrying about secrets leaking. Regroup, re-think and get these movies back on track. Some will feasibly give the MCU a pass now, saying it stands to reason that after a hot streak, there will be some misses.

Then there’s the whole 45 days of exclusive theatrical before heading to Disney+ — once fanboys figure that out, could that hold them back from a second trip to the cinema? Maybe.

Why all the fuss, Marvel? Because as the entire town knows, the success of movie theaters and the box office as we come out of this pandemic hinges on your movies, and the last thing we need is for that to break down. 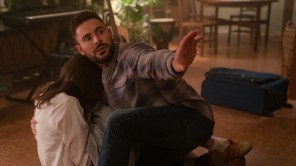 Universal’s $12M production of Firestarter is in bad shape, with $3.8M over three-days after a $1.54M Friday. I mean, the original 1984 Drew Barrymore movie, unadjusted for inflation, opened to more money with $4.7M, and at fewer theaters, that being 1,356. The Blumhouse co-production was slammed with a C- CinemaScore. Even if there was a full theatrical here, sans Peacock, the mind wonders how much more business would trickle in. Screen Engine and Comscore PostTrak was bad at 50%, with a 27% recommend. Of those who showed were 54% guys, 71% over 25, with 69% between 18-44. Diversity demos were 42% Caucasian, 22% Latin and Hispanic, 22% Black, and 14% Asian/other. Most potent markets were West and South. Firestarter only saw 130K admissions, per EntTelligence.

Why is the movie on this weekend? It was Friday the 13th yesterday, and that opportunity launch for a horror title can’t be passed up by a genre studio such as Blumhouse. Certainly, the window collapsing here on Peacock will do further damage to Firestarter‘s downstream revenues in the long run. Again, it’s experimentation. Universal knew it was a bad movie, and here it is with a theatrical day-and-date. It doesn’t mean they’ll practice this with all bad horror movies.

Mixed chatter on social media before opening, per RelishMix, “From the 1984 Drew Barrymore title trending in convo with continuous positive references to the original, and questions as to why she does not make an appearance in the remake. Zac Efron’s casting is well-received, as well as Stephen King’s cinematic legacy. That said, questions bubble about if the film is ‘straight to streaming’ with some confusion if it is day/date — with expected criticisms of ‘Hollywood reboots.'”

In regards to Firestarter‘s reach on social media, RelishMix counted 182.3M across Facebook, Twitter, YouTube, Instagram and TikTok. While that’s ahead of norms, close to half of the pic’s SMU connects to Efron’s social media followers at 90.3M. Blumhouse’s social channels, with 1.2M fans, are moderate, and Peacock’s social at 1.7M are lightly sprinkled into the mix.

Roadside Attractions has the family faith-based movie Family Camp booked in 854 locations which opened to $1.425M. The Brian Cates directed and co-written film follows two polar-opposite families who are forced to camp together. The dads struggle to hold onto their families and marriages as they compete for the coveted camp trophy. Any business this title did was in the faith-based belt of the South and Mid-West, a total of 175 markets, with the best markets being Dallas, Phoenix, Oklahoma City, Nashville, San Antonio and Sacramento. 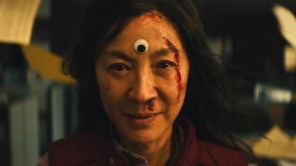 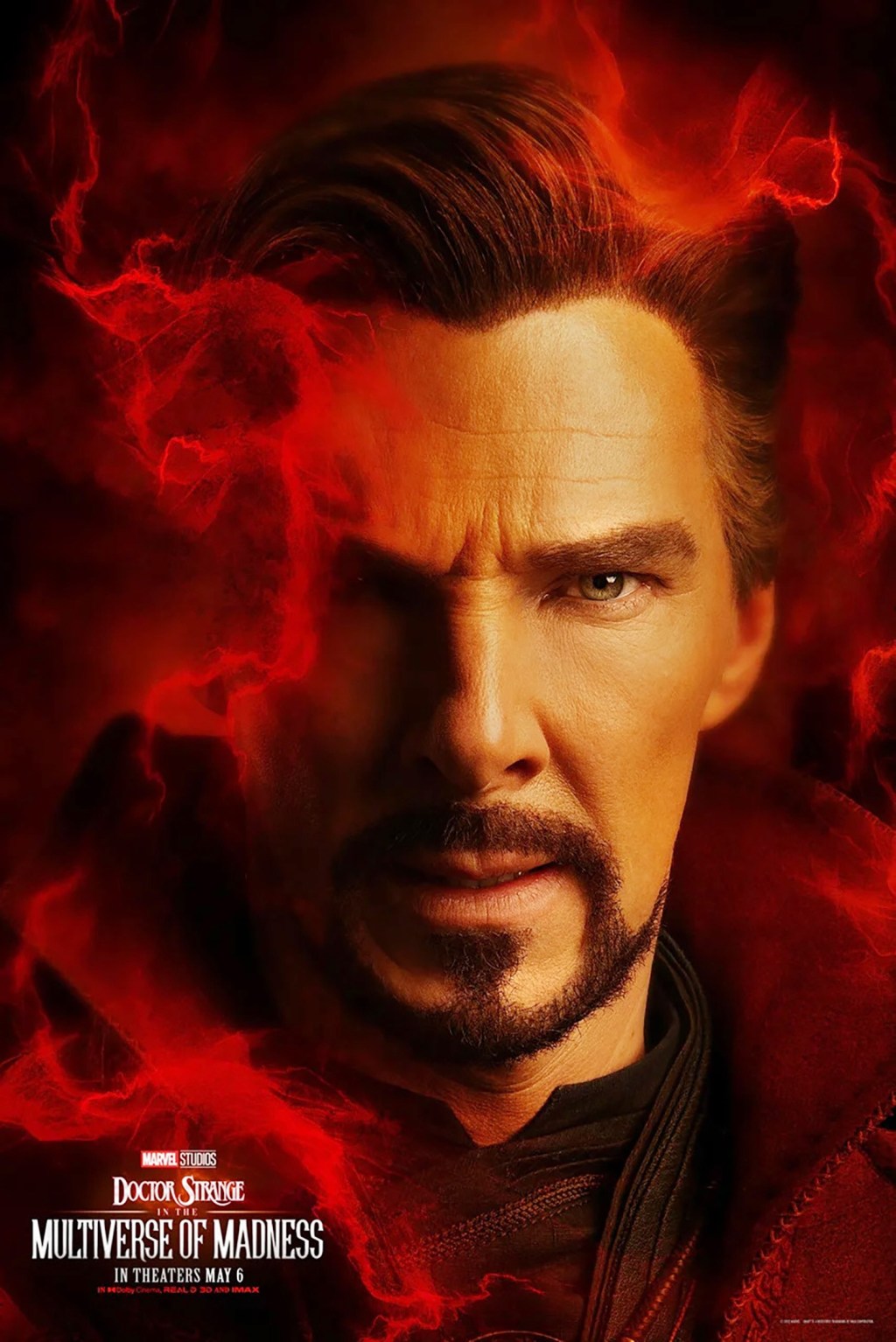 FRIDAY AM: Disney/Marvel’s Doctor Strange in the Multiverse of Madness easily will reign in its second weekend without any truly fire-breathing competition from rival majors, expected to draw $74M-$80M, a 57%-60% decline.

Universal has Blumhouse’s theatrical/Peacock day-and-date release Firestarter, a remake of the Stephen King classic. The Zac Efron movie is expected to be the most potent with women, and it’s not expected to make much at 3,412 theaters, between $5M-$7M. Thursday night previews began at 5 p.m. and saw $375K from 2,700 venues. The movie also hit Peacock that night. It is what it is for this estimated-$12M production, which has been slaughtered by critics at 24% Rotten amid continued experimentation by the entertainment conglom with its OTT service. A comp here is Searchlight’s Antlers, which was released back in October to $370K in previews, a $1.7M opening day and $4.3M opening.

‘Doctor Strange In The Multiverse Of Madness’ Review: Benedict Cumberbatch Works His Magic In Sam Raimi’s Marvel Of Horror

Sarkaru Vaari Paata from filmmaker Parasuram collected an estimated $310K on Thursday at 500 sites after a Wednesday debut of $940K for a two-day of $1.25M. The Telugu action drama follows a bank manager who is tasked by the government to bring a fraudster to justice.