DALLAS — Stephen Curry shimmied for the TV crew, Andrew Wiggins shook Luka Doncic with a posterizing dunk and the Warriors are thinking sweep.

“He’s looking like Dominique Wilkins out there,” Klay Thompson said of Wiggins after scoring 19 points as the Warriors moved to the brink of the NBA Finals, three years after the end of a five-year run that yielded three championships.

Golden State, which swept Portland in its most recent West finals in 2019 before Toronto won the title, goes for the sweep in Game 4 on Tuesday in Dallas. No team has rallied from 3-0 down to win an NBA playoff series. 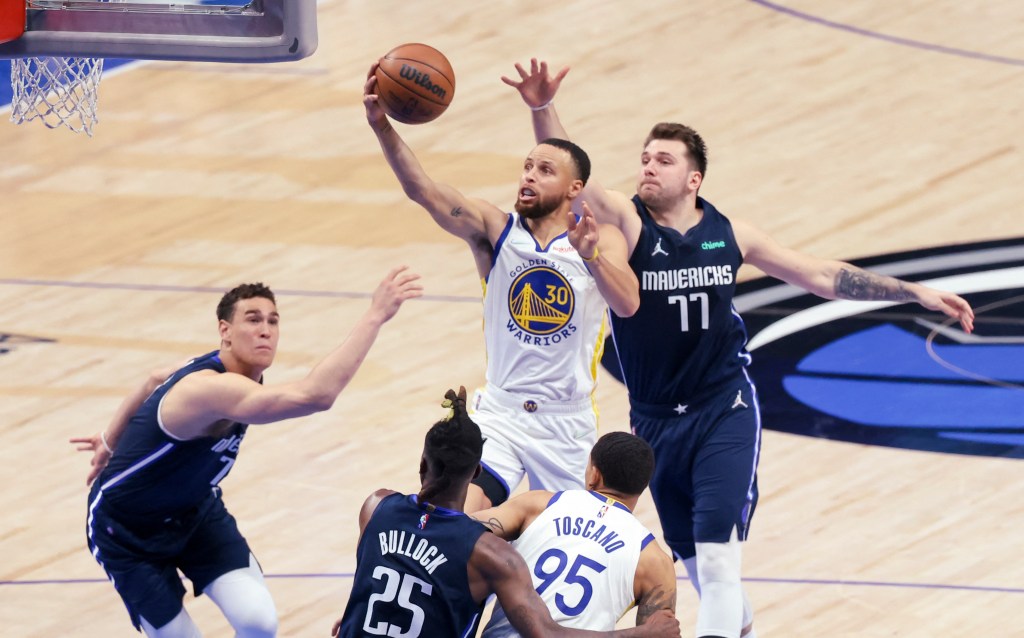 “I love the position we’re in,” Warriors coach Steve Kerr said. “I love the fact that our team came in and got the win tonight. This was the one we felt like we had to get. Coming here up 2-0, you’ve got to take advantage of your momentum.”

Doncic scored 40 and beat the first-quarter buzzer with a 32-footer that got the crowd going with the Mavericks again at home trailing 2-0, as they did against top-seeded Phoenix before winning the West semifinal series in seven games. 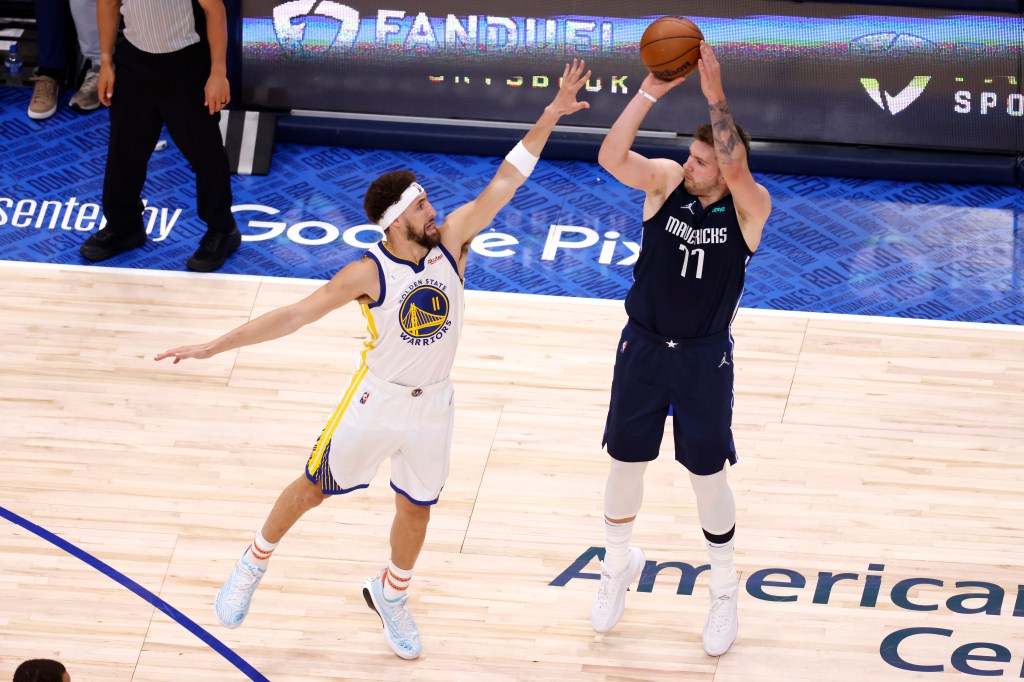 Luka Doncic shoots during the Mavericks’ Game 3 loss to the Warriors. Getty Images

But that shimmy-inducing bucket from the young superstar was a blip on an otherwise rough night from 3-point range for the Mavericks, who missed their first seven and finished 13 of 45.

Reggie Bullock and Maxi Kleber, two long-range specialists for Dallas, missed all 12 of their 3s combined and were 0-15 overall. Both went scoreless, offsetting Spencer Dinwiddie’s 26 points off the bench. Jalen Brunson scored 20.

Wiggins’ one-handed dunk over Doncic midway through the fourth quarter was called a foul because his elbow made contact around Doncic’s neck as Doncic jerked backward and fell. But the replay ruling after Kerr challenged was incidental contact, giving Golden State a 93-83 lead.

“I got hit a little bit, but that was impressive,” Doncic said. “I’m not going to lie. I saw the video again, and I was like, ‘Oh …’ That was pretty incredible. I wish had those bunnies.” 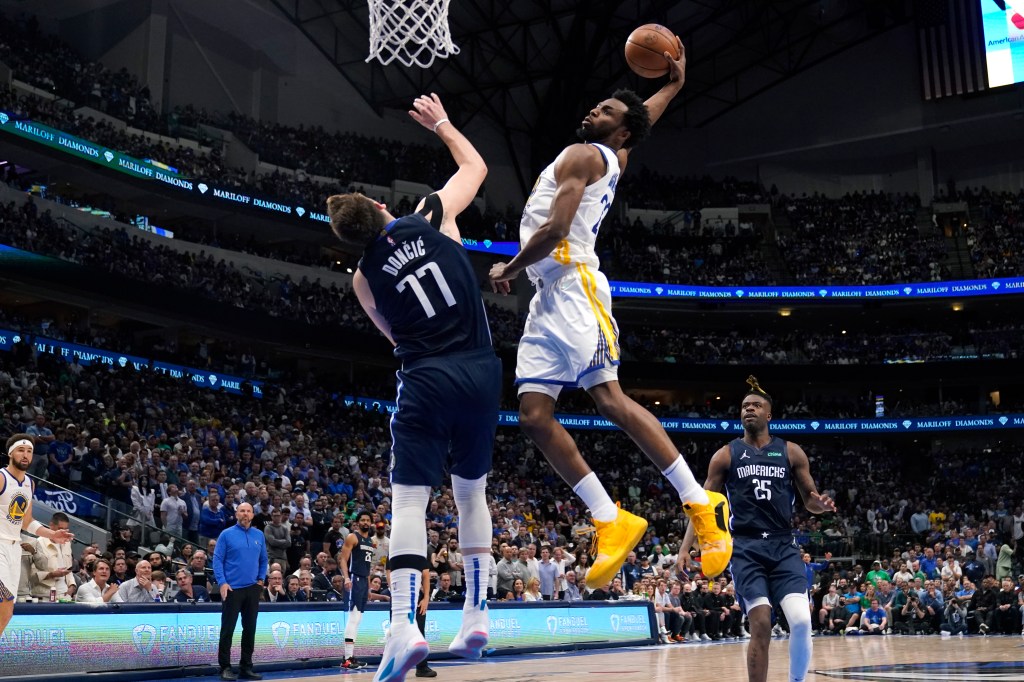 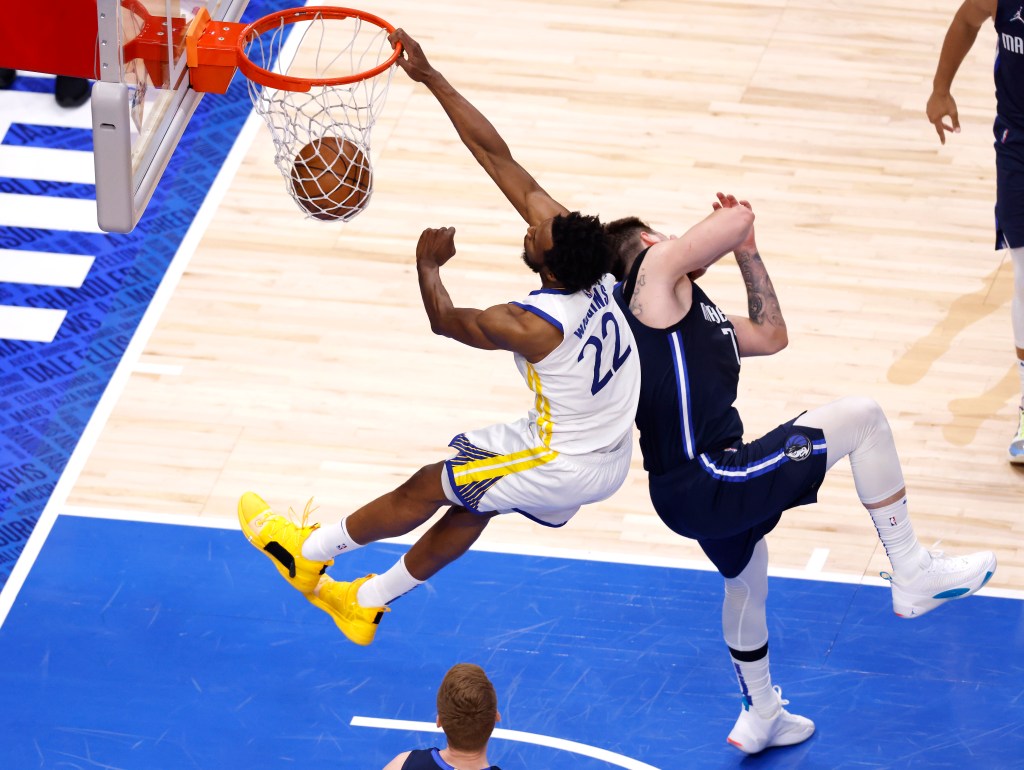 About a minute later, Wiggins, who matched his playoff career high with 11 rebounds, moved quickly down the right baseline for a follow dunk on a miss by Curry.

“Just feeling the energy,” Wiggins said of his dunk over Doncic. “That’s the main thing when I seen the rim. That’s all I seen. They tried to take it away from me, but …” Wiggins said, interrupting himself with a laugh before thanking Kerr for the challenge.

Curry scored 11 points in the third quarter, giving the Warriors their biggest lead at 78-64 with a step-back 3 in the final minute and turning to the national TV crew for a close-up view of his shoulder shimmy. 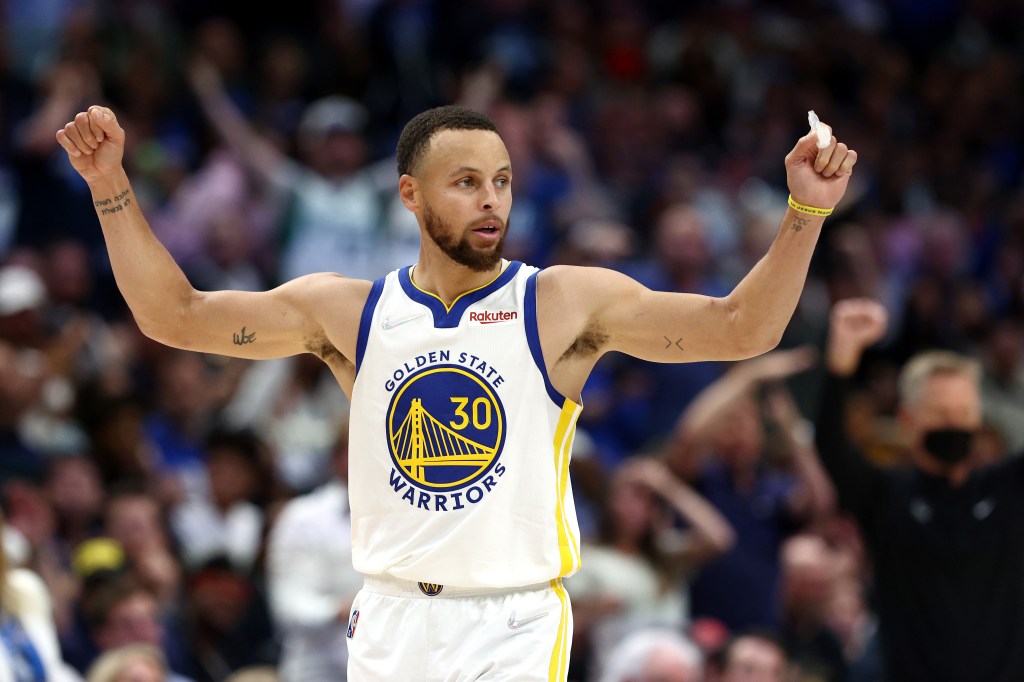 Stephen Curry reacts during the Warriors’ Game 3 win over the Mavericks. Getty Images

Doncic scored 21 points in the fourth quarter as the Mavericks tried desperately to close the gap, but fell to 2-6 in his three playoff seasons when the 23-year-old, three-time All-Star scores at least 40 points.

One of Dinwiddie’s 3-pointers got Dallas within five points with 1:15 remaining, but Jordan Poole answered with one from the left wing just inside the final minute.

The Mavericks, playing past the first round since first-year coach Jason Kidd was the point on the Dirk Nowitzki-led team that won the 2011 title, lost a nine-point lead in the final four minutes of the first half two nights after failing to hold a 19-point lead on the road in a Game 2 loss.

“This is just the beginning of this journey,” Kidd said. “I know you guys have us winning the championship before the season started. And that’s a joke if you didn’t get it. This is a lot bigger than just this one game or this series. This is huge for our franchise because none of you guys had us here.”