Undermanned Giants a team that needs to get healthy fast ARLINGTON, Texas — Daniel Jones threw it to the heavens, and Darius Slayton soared to the moon and snatched the ball away from Anthony Brown, 44 yards down and one to go, and two plays later Saquon Barkley was in the end zone, and Jerry World sat in stunned silence.

And then Darnay Holmes tipped a Dak Prescott pass up in the air against CeeDee Lamb and Julian Love accepted the gift interception, the second thrown by Prescott, at the NYG 10 just after the two-minute warning.

Depleted, decimated Giants 13, Cowboys 7 at the half.

This was a coaching clinic put on by Brian Daboll and DC Wink Martindale.

But you play 60 minutes, or all the coaching genius in the world won’t matter.

The Cowboys’ talent advantage rendered all the resilience and fight and mental toughness the Giants could muster.

Bottom line: Daniel Jones and the Giants — 28-20 losers — brought a water pistol to a gunfight. 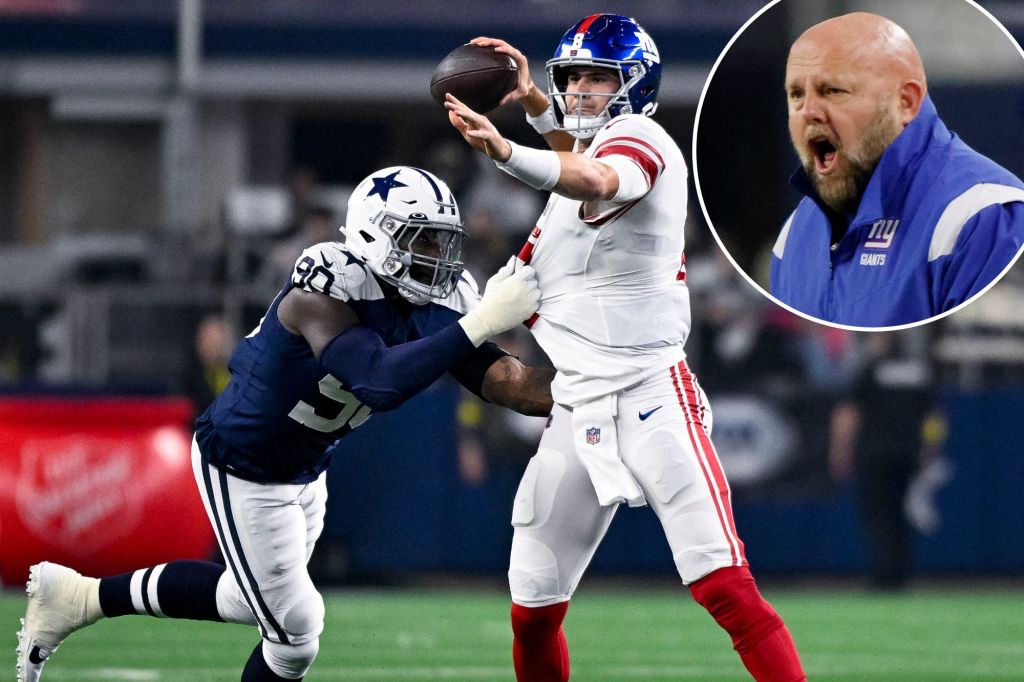 Daniel Jones, under pressure from Dexter Lawrence, throws a pass during the Giants’ 28-20 loss to the Cowboys. Brian Daboll’s undermanned team was no match for Dallas, The Post’s Steve Serby writes.USA TODAY Sports; AP

It was inevitable that their defense would break and not just bend.

Boy, could they use Odell Beckham Jr.

Jones could have used name tags to identify some of the bodyguards valiantly keeping Micah Parsons and the rest of the Cowboys predators from turning him into turducken on the first football-playing Thanksgiving of his life.

He tried to be the gladiator inside Jerry Jones’ howling colosseum, but he didn’t get to play Russell Crowe.

But here’s what Daniel Jones and the Giants needed to do even before they boarded their flight home:

The playoffs are still out there for you. 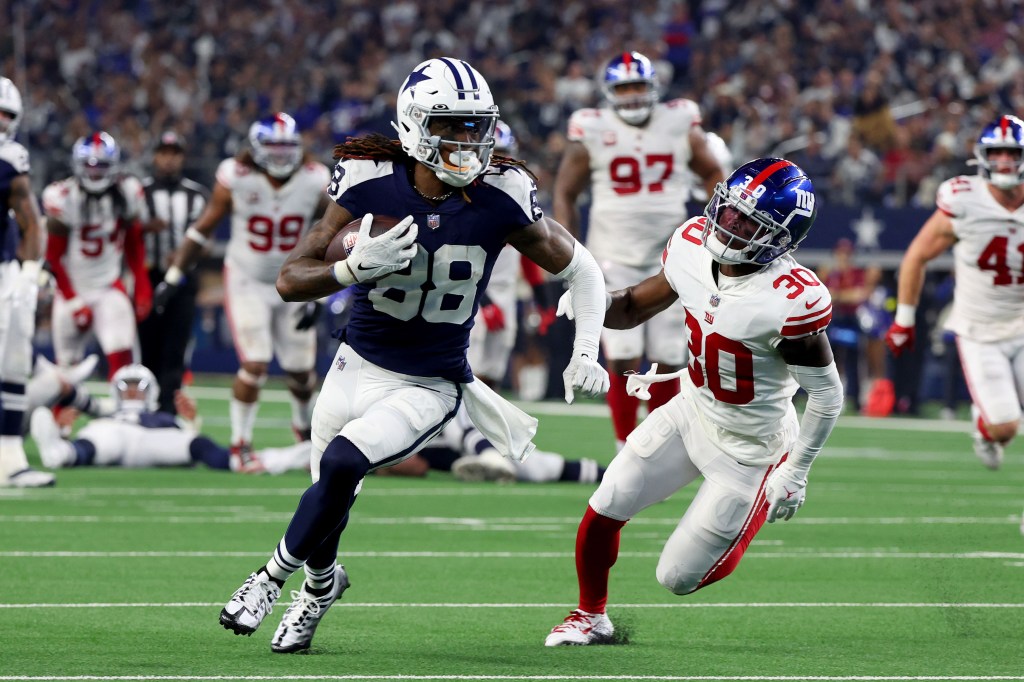 CeeDee Lamb runs after a catch as Darnay Holmes tried to chase him down during the Giants’ loss to the Cowboys.Getty Images

Daboll said there’d be bumps in the road.

There is no crying in football, and no excuses.

And no medals for trying.

The Giants look like a team that needs to get healthy between now and the Commanders on Dec. 4.

Daboll tried to jump-start his offense late in the third quarter.

It was fourth-and-1 at the NYG 45 late in the third quarter, Cowboys 14, Giants 13, when Daboll went for it, and Barkley could not corral a short far-from-perfect toss from Jones while falling backwards. 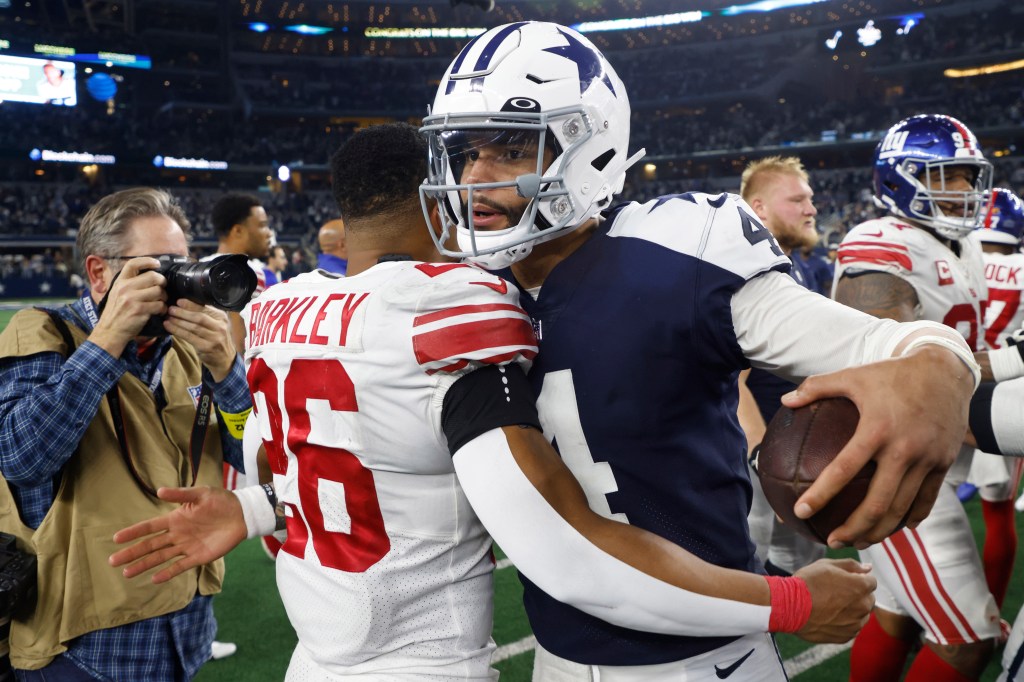 Dak Prescott and Saquon Barkley hug after the Giants’ loss to the Cowboys.AP

And that essentially was ballgame.

Because soon, Prescott was rolling right and finding Dalton Schultz with a 6-yard TD pass and it was Cowboys 21, Giants 13.

And soon, someone named Jake Ferguson was hurdling Jason Pinnock in the open field, and the Giants were roadkill.

The Cowboys had showed utter disdain for the threat Jones presented them when they went for it fourth-and-2 at the Dallas 40 on their opening possession and paid for it when Jaylon Smith and Jason Pinnock stuffed Ezekiel Elliott and Graham Gano booted a 57-yard FG.

And then Rodarius Williams intercepted Prescott.

Every step of the way, the Giants had no margin for error

To wit: Nick McCloud could not afford to muff a punt at the Dallas 1 and let it squirt into a touchback.

Tyre Phillips could not be the ineligible man downfield on a 24-yard Jones’ TD pass to Isaiah Hodgins.

Holmes could not have been flagged for illegal contact on a failed third-down conversion that would have forced the Cowboys to attempt a field goal.

Holmes could not have been flagged for holding on a failed third-and-7 early in the third quarter nor be beaten minutes later on third-and-12 by Lamb for 14 yards on the drive that ended with Prescott firing a 15-yard TD pass to Schultz against McCloud on third-and-goal that made it Cowboys 14, Giants 13.

Slayton’s catch was a case of even a blind squirrel finds an acorn. The better team won.