The last time that Michael Hutchence’s manager, Martha Troup, spoke to him on the phone, the INXS frontman was making big plans for the future.

“He wanted to start a publishing company. And he wanted to get an apartment in New York,” Troup told The Post. “That’s what he said to me.”

“He goes, ‘Things aren’t good, you know?’ And then the next one was like, ‘Hey, are you there?’ In the second one, it was more like he was tired. It was, like, almost sadness I heard in his voice.”

Hours later, on Nov. 22, 1997, Hutchence was found hung by a snakeskin belt in a hotel room at the Ritz-Carlton in Sydney, Australia. A maid found him naked and in a kneeling position, and, although his death was ruled a suicide, there were rumors that it was due to autoerotic asphyxia. The rock star — who had a Mick Jagger-meets-Jim Morrison aura captured on hits such as “New Sensation” and “What You Need” — was just 37 years old. 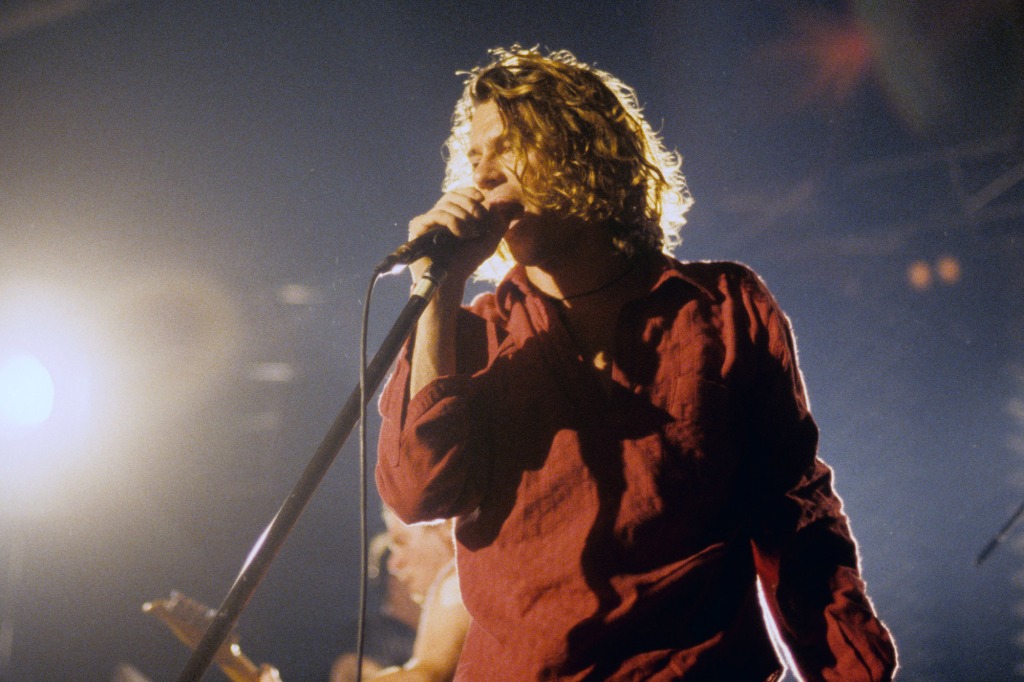 After riding the New Wave highs, things took a turn in the early 1990s. Here, Hutchence performs in front of a crowd in Munich in 1993.picture alliance via Getty Image

Sadly, at the end, Hutchence lost his battle with the demons inside.

“He was in pain,” said friend Dorothy Carvello, who met Hutchence while working at INXS’s label, Atlantic Records. “When he spoke, he was in pain.”

In high school, Hutchence met his future bandmate Andrew Farriss, and the two went on to form INXS with two other Farriss brothers — Tim and Jon — in 1977. Three years later, the group released its 1980 self-titled debut album, which spawned the Australian hit “Just Keep Walking.”

As lead singer, Hutchence took the band from a group that had success in their native Australia to worldwide fame with the 1985 album “Listen Like Thieves,” the 1987 LP “Kick” and 1990’s “X.” 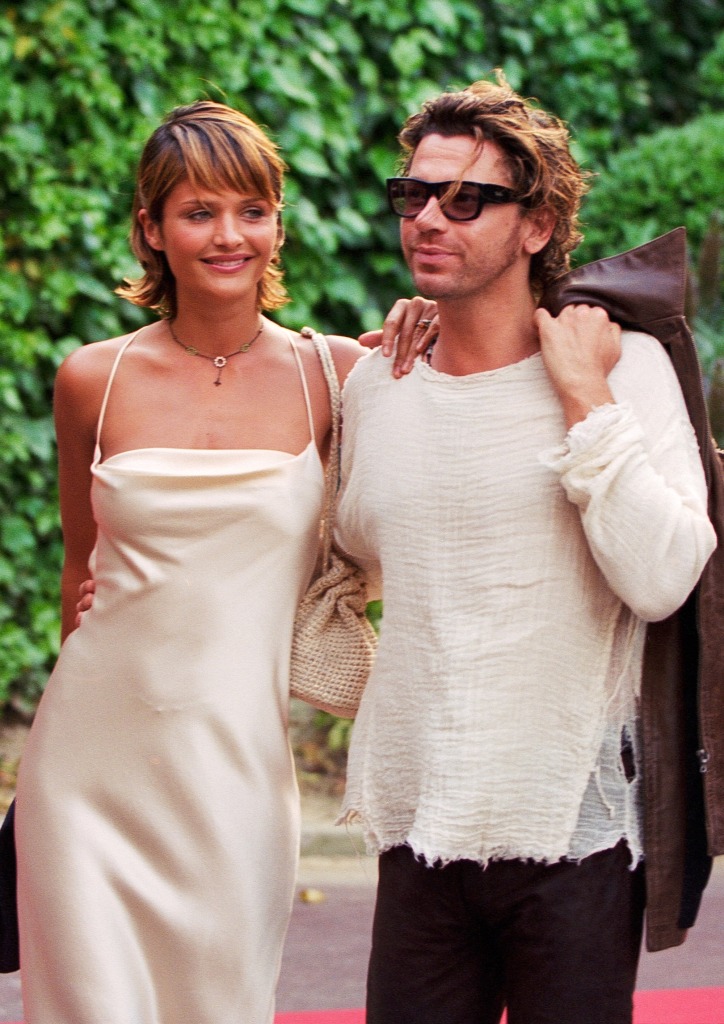 After suffering a traumatic injury in Copenhagen while visiting Denmark in 1992 with model girlfriend Helena Christensen, everything seemed to change for Hutchence. Corbis Via Getty Images

MTV turned him into a mystifying presence: The cool, charismatic Hutchence became one of the greatest rock frontmen of his generation, oozing both soul and sex appeal. He singlehandedly made INXS’ “Need You Tonight” video the hottest thing on MTV in 1987, and the iconic clip — with the singer seducing the masses in a leather jacket and pants, sans shirt — went on to win Video of the Year at the 1988 VMAs.

In the span of a few albums, Hutchence became a rock god. “We talk about people like Freddie Mercury and Mick Jagger — he is one of those,” said Lori Majewski, co-host of SiriusXM’s “Feedback,” who wrote about Hutchence in her 2014 book “Mad World: An Oral History of New Wave Artists and Songs That Defined the 1980s.” “He is one of the greatest live frontmen of all time.”

“He was magical,” added Troup, who started working as INXS’ US manager in 1986. “He was the quintessential rock star. He was mesmerizing. He had a sensuality about him. But he also had a shyness about him. And he was very sensitive. He had his ups and downs, and he had his insecurities. When he would play at a place like Wembley [Stadium in London], I used to laugh because he couldn’t see past the first 10 rows, because he never wore his glasses onstage. But he had bad eyesight. So I used to think, ‘Oh, that must be it. That’s why he could do it. Because he can’t see really past the first few rows.’” 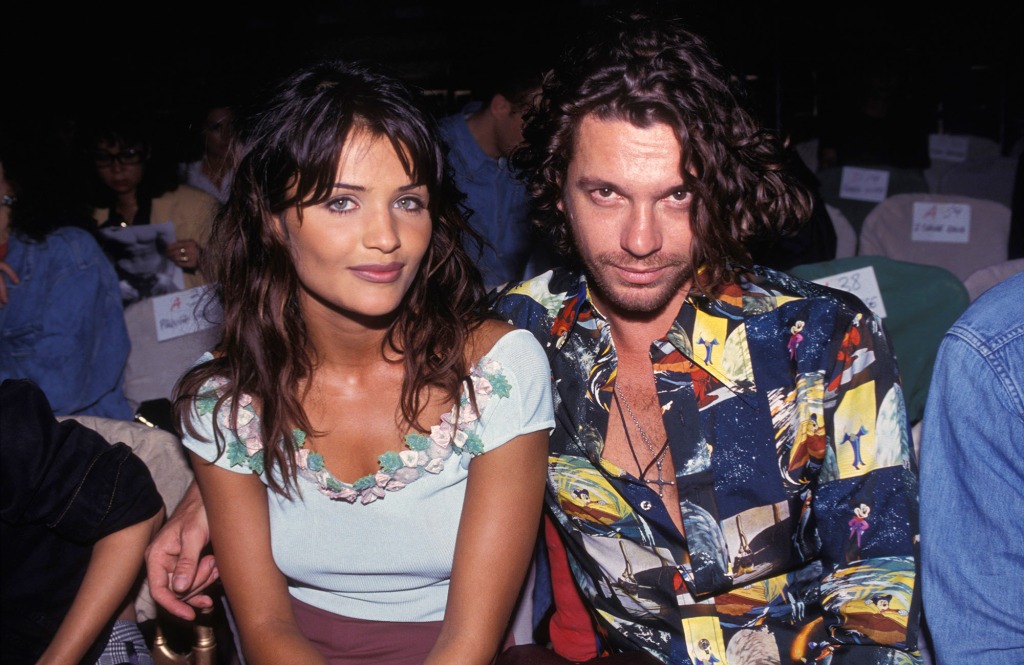 Hutchence and Christensen were snapped at a fashion show in Paris earlier on in that fateful summer of 1992.Gamma-Rapho via Getty Images

And even being one of the biggest rock stars in the world, Hutchence was, in Aussie speak, a regular mate. Photographer Chris Cuffaro, who first shot the INXS singer during the “Kick” tour in 1988, described Hutchence as “the nicest guy in the world.”

“I was backstage with him, and he was wearing Doc Martens, and I said to him, ‘I’ve never worn Doc Martens,’” recalled Cuffaro. “And he’s like, ‘Oh, these are great. So he let me try on his shoes, so I could figure out if I like Doc Martens. And then after that I wore Doc Martens for the next 10 years.”

But just as INXS was releasing “Welcome to Wherever You Are” in August 1992, life came crashing down for Hutchence at the peak of his career. While he and his then-girlfriend, supermodel Helena Christensen, were biking in Copenhagen, Hutchence got into an altercation with a taxi driver. The rocker fell backwards and hit his head, but didn’t seek medical attention for several days. It turned out he had a fractured skull — a brain injury that robbed him of his taste and smell and also affected his mental health. He became depressed and aggressive 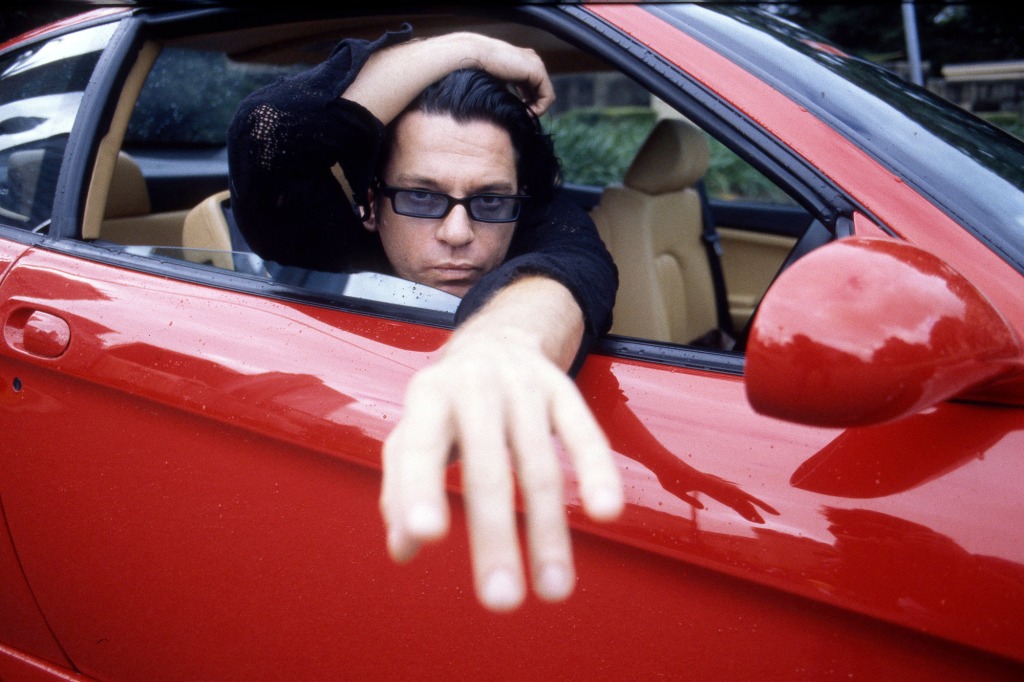 “He was just not the same person,” one friend said of the 1992 incident in Copenhagen. Here, Hutchence is photographed in a Ferrari in 1996, a year before his death.Getty Images

“He was just not the same person. There’s no question about it … Nobody knew [why] at the time, but his behavior started to become erratic,” said Carvello. “He self-medicated. He began taking a lot of Prozac … Traumatic brain injury is something that we know about now through football players. And suicide can be a byproduct of traumatic brain injury.”

At the same time, Hutchence’s career took a big hit when “Welcome to Wherever You Are” — which found the band experimenting with everything from sitars to a 60-piece orchestra— flopped by INXS standards, failing to match the heights of the band’s previous albums.

The strutting swag that Hutchence had displayed on “Need You Tonight” was now replaced with doubts.

“He questioned himself,” said Troup. “That’s what happens with fame — you go up the mountain and come down the mountain. It was tough for him. You feel so confident when you have that fame — even when you have your insecure moments — and Michael was gorgeous, inside and out. But he would start questioning everything: ‘It’s my looks, it’s my age, it’s my …’ So I think that took a toll on him.” 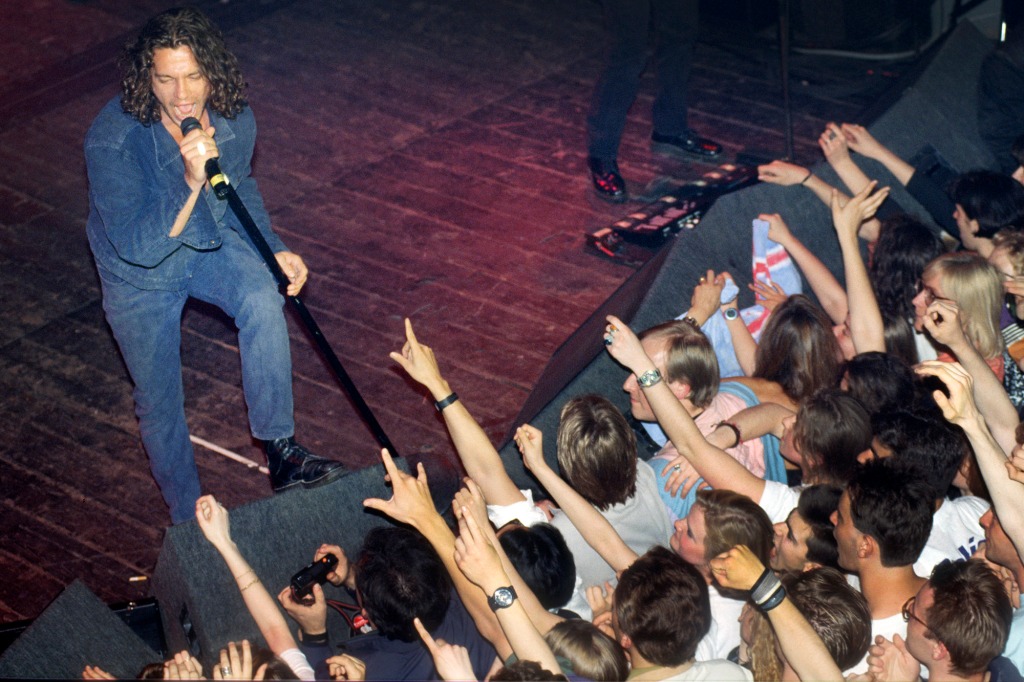 Hutchence playing to the crowd in Belgium in 1991, after the release of their last smash-hit album, 1990’s X.Getty Images

In 1995, Hutchence left Christensen for British star Paula Yates, who was married to Live Aid organizer Bob Geldof at the time. Although the pair had a tumultuous relationship, Hutchence took great joy in their daughter, Tiger Lily, who was born in 1996.

“From that moment on, all I did was hear about Tiger,” said Troup. “He loved, loved, loved, loved that little Tiger. He would carry around a clock with her picture on it and bring it into meetings. It got to the point it was embarrassing.”

But Hutchence’s relationship with Yates — who died in 2000 from a heroin overdose — also pulled him into her tabloid-frenzied custody battle with Geldof. The couple were arrested for suspicion of drug possession after the family nanny found a small amount of opium in a shoebox under their bed, though the case was later dismissed for lack of evidence. 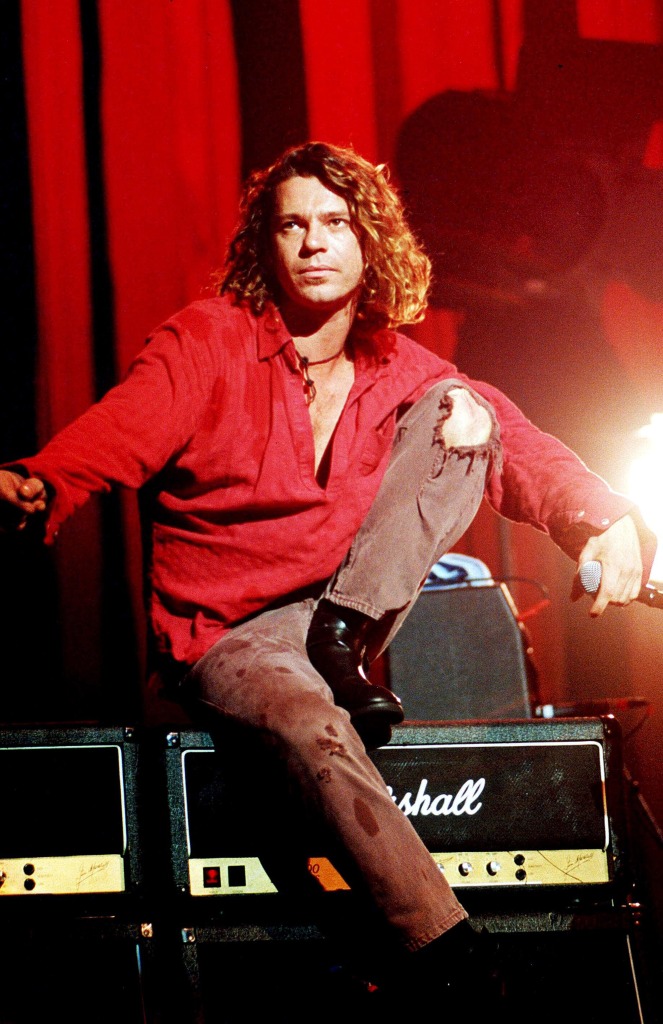 Despite his tabloid travails, Hutchence was determined that the show must go on. In the week leading up to his death, the band was preparing to tour Australia to promote 1997’s “Elegantly Wasted,” which failed to produce any hit singles. Troup wasn’t so sure they should go through with it.

“I was concerned,” she said. “We were meeting different people in the film and TV world in LA. And he just seemed out of sorts. And I said, ‘Michael, let’s cancel the Australian tour.’ And he goes, ‘I could never do that. I would never do that to the fans in Australia.’”

Still, Carvello isn’t convinced that he meant to take his own life.

“I’m not sure that he really intended to do that,” she said. “I think it was a rash act that happened in the heat of the moment, whatever happened. Because think about it — no [suicide] note. And for somebody whose job was to write words, I always found that strange.” France vs. Australia prediction: Goals may be...