3rd Update, 12:26 PM: Rob Zombie has shared the first images from the set of his reboot of The Munsters, thereby confirming three castings: Jeff Daniel Phillips as Herman Munster, his wife Sheri Moon Zombie as Lily Munster and Dan Roebuck as Grandpa Munster.

The new images posted to Instagram on Monday show the cast members seated in their director’s chairs, in front of the set for the Munsters’ residence at 1313 Mockingbird Lane. “Since Halloween is rapidly approaching I thought it was the perfect time to MEET THE MUNSTERS!” Zombie wrote in the photo caption. “Direct from the set in good old Hungary.”

Zombie first announced the untitled Munsters pic as his next project back in July, calling it the project he’s “been chasing for 20 years.” In the months since, he’s routinely teased the project with social media posts, depicting set blueprints, the clay sculpture which would serve as the basis for Herman’s forehead prosthetic and more. The writer-director’s adaptation of the 1960s creepshow comedy will be for Universal 1440 Entertainment, which means it may well end up heading to Peacock.

Chronicling the decidedly different lives of a family of friendly monsters from Mockingbird Heights, The Munsters originally aired from 1964-66 on CBS—in the same time frame that classic series The Addams Family ran on ABC. The sitcom wasn’t a monster hit but became a favorite in syndication during the ensuing decades, and a 1988-91 syndicated version followed. Decades later, NBC was in development on a reboot series from Jill Kargman and Seth Meyers.

2nd Update, July 21: Rob Zombie took to Instagram once again with some more previews of his film adaptation of The Munsters television show from the 1960s. This time, Zombie offered a look at plans for Herman Munter’s familiar brow.

“The clay is out and the sculpting has begun on a very prominent brow for THE MUNSTERS” he wrote, adding the hashtags #robzombie #themunsters #hermanmunster

1st Update, 8:20 PM: Rob Zombie took to Instagram on Tuesday to tease his upcoming adaptation of The Munsters, by sharing the blueprint for a key set.

The diagram he shared offered a glimpse at the Munsters’ house on Mockingbird Lane. “The blueprints are done! Time to start the construction,” the director wrote. “Get ready for the most perfect Munsters house since 1964. I want this thing exact. #robzombie #themunsters #budapest.”

Zombie first announced his Munsters film project back in June. He’s adapting the classic 1960s comedy for Universal 1440 Entertainment, which may well mean that his monster film will stream on Peacock.

For a look at Zombie’s latest Munsters tease, click below.

PREVIOUSLY, JUNE 7: Rob Zombie is pulling up to 1313 Mockingbird Lane. The rocker-turned-filmmaker said on social media today that he will tackle The Munsters as his next film project. The adaptation of the 1960s creepshow comedy will be for Universal 1440 Entertainment, NBCU confirmed, which likely means it will stream on Peacock.

“Attention Boils and Ghouls!” he wrote amid emojis on Instagram. “The rumors are true! My next film project will be the one I’ve been chasing for 20 years! THE MUNSTERS!” See the full post below. 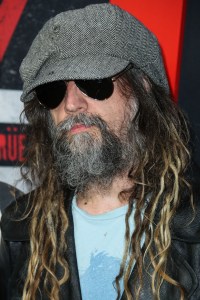 Zombie directed two Halloween reboot films in the 2000s and most recently wrote and helmed 3 from Hell and 31. He launched his feature filmmaking career with House of 1000 Corpses (2003) and followed that up with The Devil’s Rejects two years later. He wrote and directed both but didn’t say whether he plans to write The Munsters as well.

Chronicling the decidedly different lives of a family of friendly monsters in Mockingbird Heights, The Munsters originally aired from 1964-66 on CBS — the same time frame that the equally ooky Addams Family ran on ABC. The Munsters starred Fred Gwynne as the hulking, smiling but generally clueless and easily frustrated patriarch and Yvonne DeCarlo as more grounded, Bride of Frankenstein-esque Lily Munster.

The sitcom wasn’t a monster hit but became a favorite in syndication during the ensuing half-century, and a 1988-91 syndicated version followed. Decades later, NBC was in development on a reboot series from Jill Kargman and Seth Meyers.