The struggling Yankees haven’t been exciting to watch lately, but their Triple-A team just did something historic. 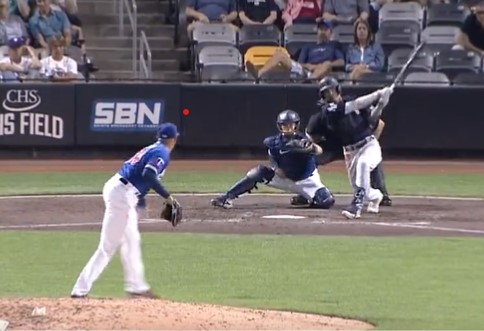 Oswald Peraza belts the game-winning two-run homer off Jovani Moran to lead the RailRiders to a 10-9 comeback win.@swbrailriders/Twitter

The Scranton/Wilkes-Barre RailRiders completed the biggest comeback in franchise history on Tuesday night, rallying from a 9-0 deficit on the road to beat the St. Paul Saints 10-9 on Tuesday night at CHS Field. It was the first-ever meeting between the two teams.

Shortstop Oswald Peraza, a highly touted Yankees’ prospect whose name was floated in trade rumors before the MLB trade deadline, belted the game-winning two-run homer off lefty Jovani Moran in the eighth inning to complete the huge comeback. It was the 17th homer of the season for Peraza, who went on a home run tear in May.

According to the team’s website, the comeback effort surpassed the franchise record of eight runs, set on Aug. 23, 2000, as the then-Red Barons overcame an 8-0 first inning deficit to beat Buffalo 10-9.

In this one, the Saints jumped out to a 9-0 lead after two innings. They manufactured three runs on the first, with runs scored on a bases loaded hit batter, a sacrifice fly and a single. St. Paul exploded for six runs in the second, keyed by a three-run homer by Chris Williams.

SWB center fielder Estevan Florial, who is expected to be called up by Yankees on Wednesday, opened the RailRiders scoring in the fifth with an RBI single, scoring Blake Perkins. Florial, who is hitting .286, was 2-for-4.

The RailRiders scored three times in the sixth to cut the deficit to 9-4. First baseman Ronald Guzman blasted a two-run shot to right-center, his ninth of the season, and catcher Max McDowell doubled in second baseman Tyler Wade, who returned to the Yankees organization in a trade with the Angels in July.

SWB added three more runs in the seventh, Guzman doubled in Peraza and scored on a home run to straightaway center from Armando Alvarez; his 11th homer of the season.

In the eighth, the RailRiders cut St. Paul’s lead to 9-8 after Florial, batting leadoff, belted an RBI double, driving in McDowell, who doubled in front of him. Then Peraza, who went 3-for-5 and is hitting .261 this season, brought home Florial with his game-winning blast.

The RailRiders comeback wouldn’t have been possible if the bullpen did hold the Saints scoreless for the final seven innings, including a stretch in which their relievers retired 16 straight from the second through the seventh innings.

Jose Mujica, Richard Rodriguez and Luke Bard (1-0) each worked two shutout innings before Greg Weissert pitched a perfect ninth for his 17th save of the year. Moran (1-1) suffered the loss for the Saints.