Ricky Gervais isn’t dumbing down his humor for the woke crowd.

The comedian is stirring the online cauldron yet again after claiming that “smart people” don’t get offended by jokes about AIDS, Hitler and other taboo topics. The 60-year-old UK comic dropped the anti-PC bombshell while promoting his new special, “Supernature,” on “The Late Show With Stephen Colbert.”

“Smart people know you can deal with anything, particularly when dealing with something like irony,” “The Office” creator told Colbert, 68.

During the interview, Gervais explained that he’d added new material to the special, which he’d tried out on the road during the coronavirus quarantine. Colbert then asked if the comedian had to switch up his material due to his two-year layoff from standup during the lockdown.

That’s when Gervais dropped the bombshell. “It [his comedy] was always evolving,” the funnyman replied, “There was a thought, ‘Will this be out of date?’ And then I realized that when you’re dealing with, you know, famine, AIDS, cancer, Hitler, those dudes are evergreen. Yeah, so they’re not going to, they don’t date.”


Colbert seemed to agree with his sentiment, saying, “There is no audience that isn’t going to love that.”

“Boo! Not Hitler! It was a long time ago,” Gervais replied facetiously, prompting the host to laughingly reply, “Like, you don’t go to a Ricky Gervais concert for just feel good.”

However, while the aforementioned topics are certainly sensitive to many, the “Afterlife” star insisted that audiences “do feel good” and that the ultimate goal “is to make them laugh.” 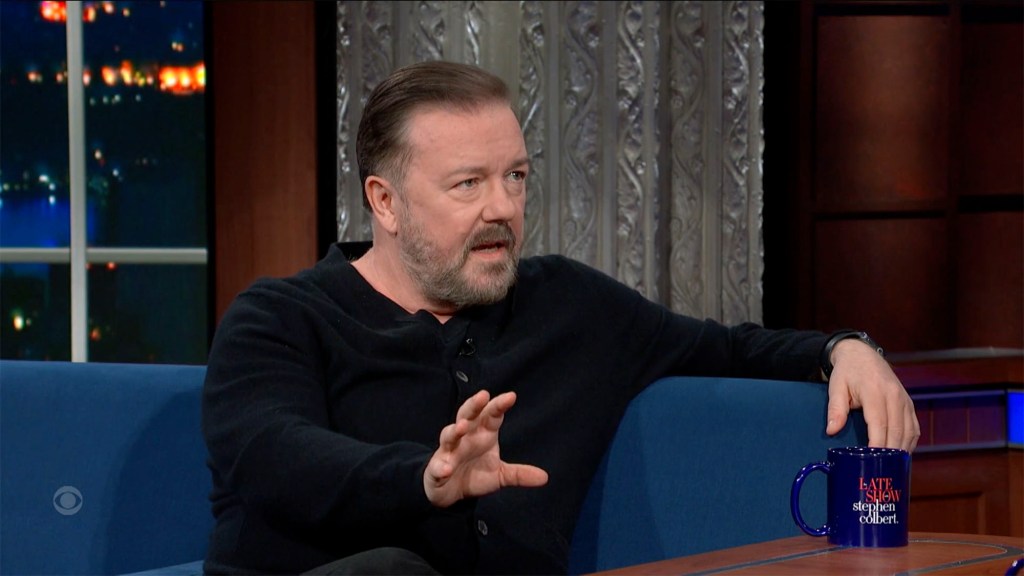 Gervais was promoting his new special, “Supernature,” on “The Late Show With Stephen Colbert.”CBS

He insisted that too often people get offended by conflating a quip with the actual “target,” and that intelligent audiences know how to take things in their comedic context.

But he’s not just making offensive jokes for the fun of it: Elsewhere in the interview, Gervais touted the healing power of dark humor, equating it to a vaccine against the harsh reality of existence. 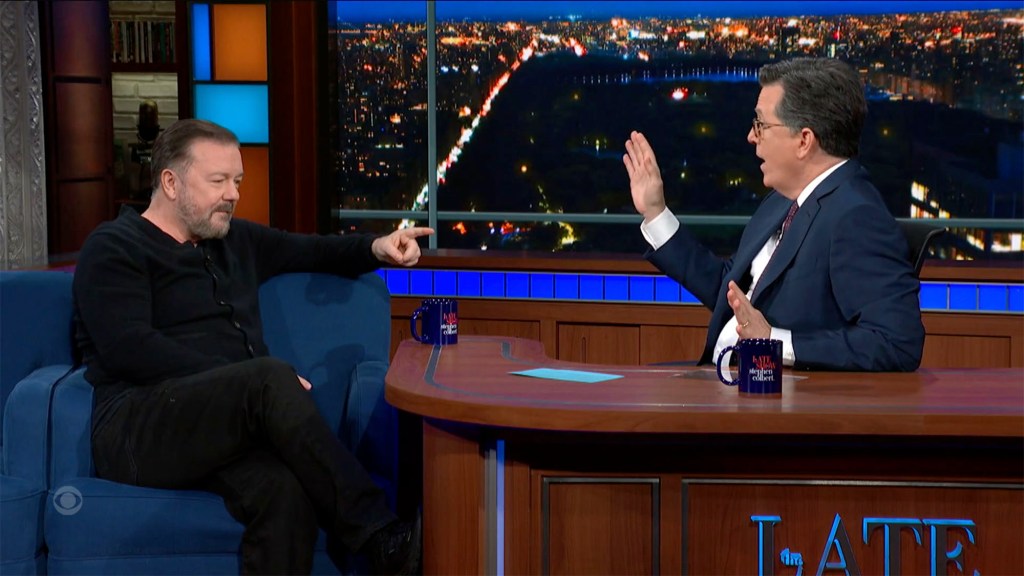 Gervais joked that his ultimate goal is to get canceled.CBS

“Humor gets us over bad stuff,” declared the Emmy winner. “That’s why I laugh about terrifying bad things. You know, that’s why comedians are obsessed with death because, you know, it gets us through… it’s an inoculation to the real things that are going to happen.”

And Gervais appears to be putting his funny where his mouth is. In the past, the “Derek” mastermind has taken his rhetorical blowtorch to a variety of supposedly taboo topics, from the holocaust to pedophilia. 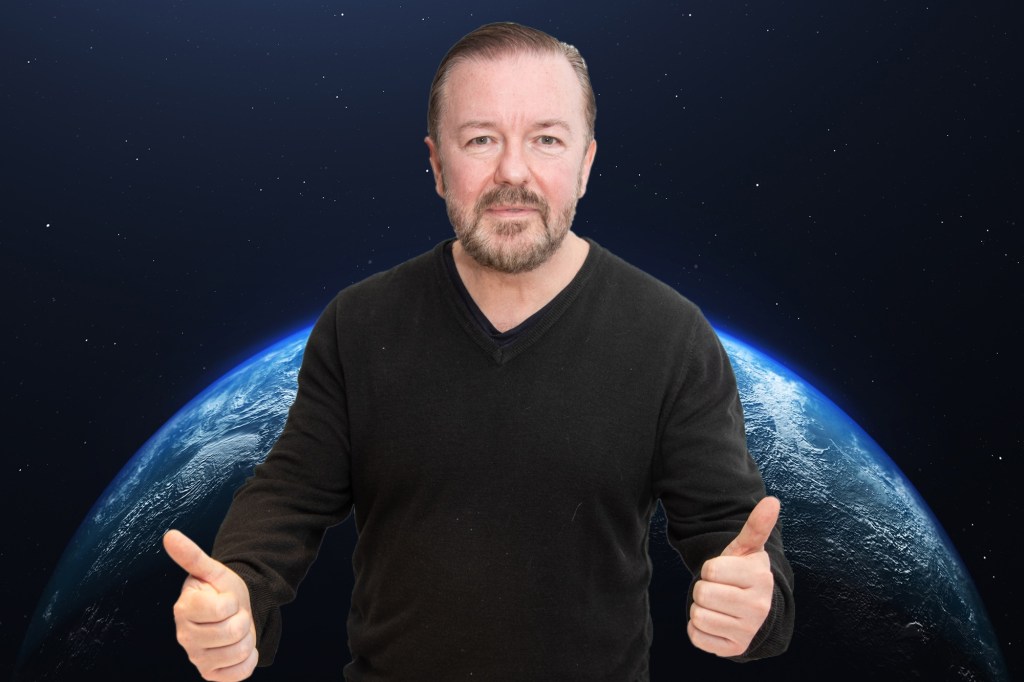 Gervais equated offensive dark humor to a vaccine against the harsh reality of existence.

Most recently, the five-time Golden Globe host controversially poked fun at Will Smith slapping Chris Rock for cracking wise about Jada Pinkett Smith at the 2022 Oscars. In a viral Twitter thread, Gervais claimed wouldn’t have mocked Smith’s hair loss as Rock had done — but rather would’ve targeted her open relationship.

Gervais joked that his ultimate goal is to get canceled by the public.

“One thing I’ve decided to definitely do, and can’t wait to start on, is my new stand-up show,” the Brit told Heat magazine while promoting his upcoming show “Armageddon.” 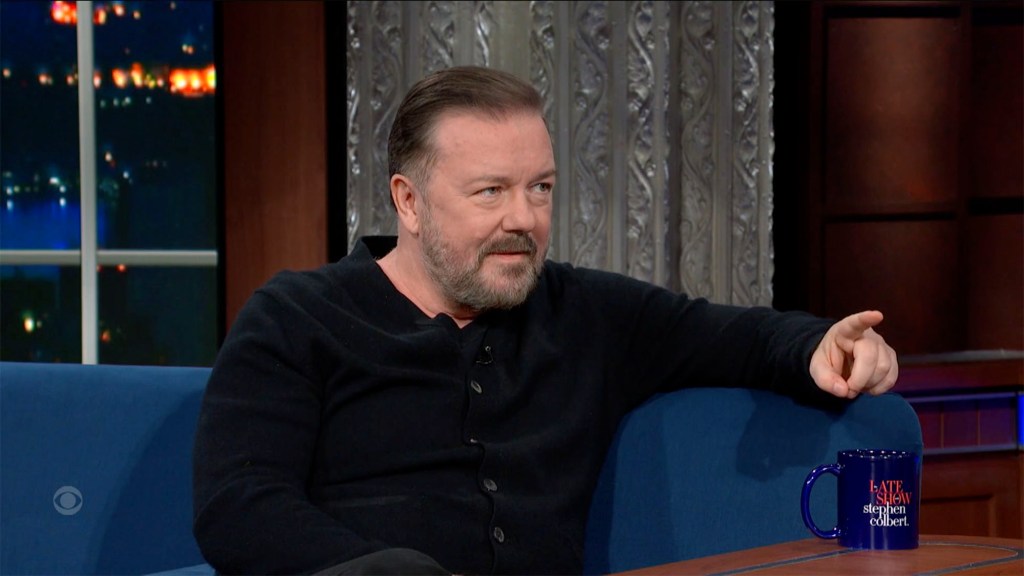 “But I deal with taboo subjects because I want to take the audience to a place it hasn’t been before and there is a tension,” the funnyman explained.CBS

The “After Life” star added, “I’m treating it like it’s my last one ever. It won’t be, but I want to put everything into it. I want to try and get canceled. No, I just want to go all out there.”

“SuperNature” drops on Netflix on May 24. The deep secret Sissy Spacek and JK Simmons are...