The Rangers are charged with turning this second-round series around on home ice after dropping the first two games on the road — and they took a step in the right direction Sunday afternoon.

In another low-scoring affair with the Hurricanes, the Rangers secured a 3-1 win in Game 3 at Madison Square Garden to cut Carolina’s lead in the series to just one game and ensure it goes to at least five contests with Game 4 back at the Garden on Tuesday and Game 5 set for Thursday in Raleigh, N.C.

With notable former Rangers Wayne Gretzky, Jeff Beukeboom, Tom Laidlaw and Stephane Matteau in attendance for the matinee, the club kept itself in this series.

After going 0-for-5 on the power play through the first two games, the Rangers power play finally broke through in the first period to end its scoring drought that dated back to the opening 20 minutes of Game 1. 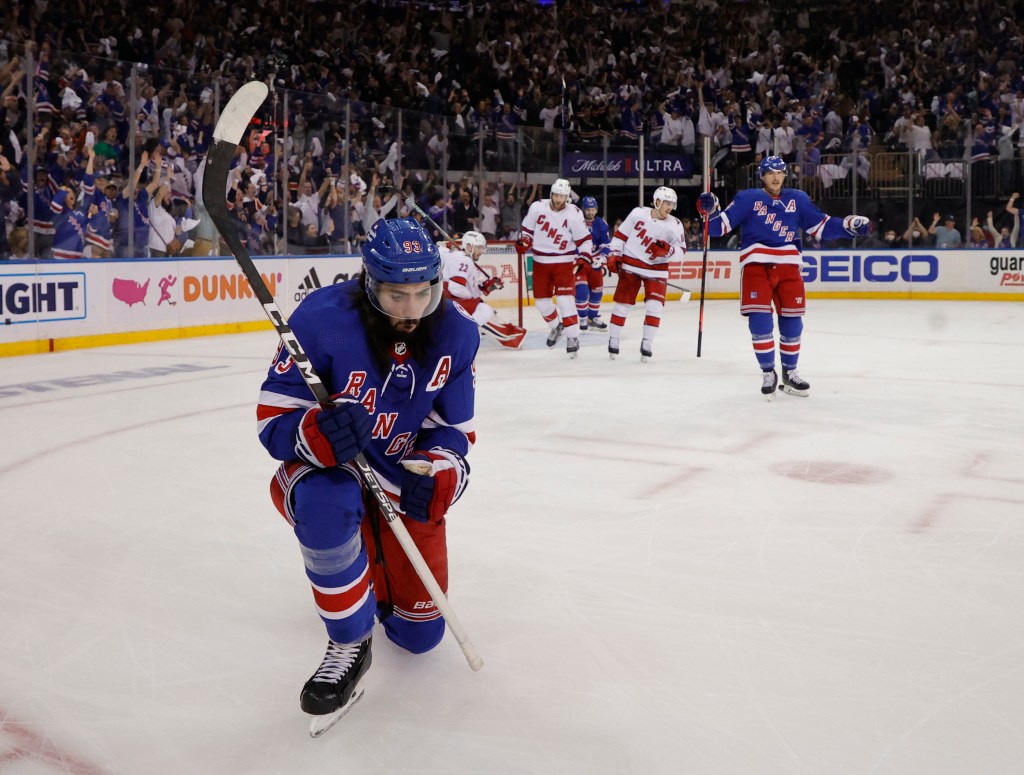 Mika Zibanejad celebrates after scoring the first goal in the Rangers’ Game 3 win over the Hurricanes. Jason Szenes

Goalie Igor Shesterkin saw more than his fair share of action against a high-powered ’Canes squad that outshot his team 44-31. With 17 saves in the first, another 17 in the second and nine in the third, Shesterkin rose to the challenge, which the Garden crowd thanked him for by chanting his name as time ran out on the clock.

Chris Kreider gave the Rangers a 2-0 less than six minutes into the middle frame, sniping one from the lower left circle as former Blueshirt turned Hurricanes defenseman Tony DeAngelo lost his stick in front. The goal tied Kreider with Ron Duguay for the ninth most points (47) in Rangers playoff history.

The Hurricanes, however, kept themselves in the game with a soft goal that Shesterkin surely wants back. Nino Niederreiter backhanded one off the rush that squeaked through under the star goalie’s armpit to pull Carolina within one at 8:18 of the second. 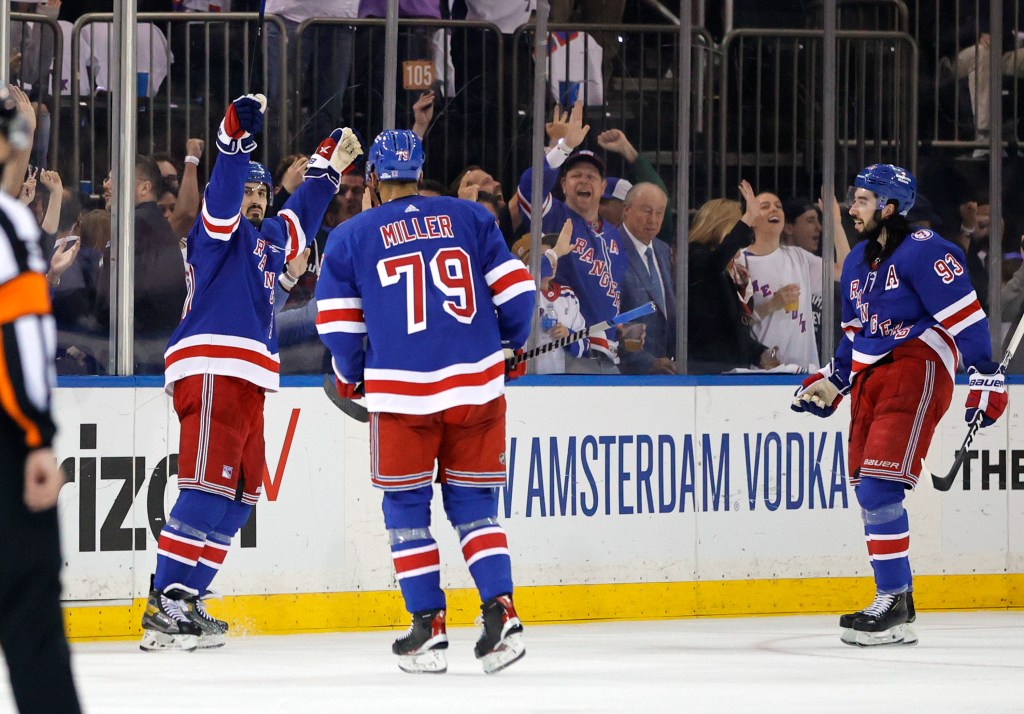 Chris Kreider, left, celebrates after his goal in the second period. Jason Szenes

But Tyler Motte chipped in an empty-net goal late in the final period to put the game out of reach.

Head coach Gerard Gallant jumbled his lines to try to spark some offense after the Rangers were shut out in Game 2. The changes broke up the Kid Line of Alexis Lafreniere, Filip Chytil and Kaapo Kakko, which had been the Rangers’ most consistent unit all postseason.

In putting Chytil on the right wing of the top line next to Kreider and Mika Zibanejad, Frank Vatrano flanked the third unit with Kakko and Andrew Copp slotted into the middle. Lafreniere jumped up to the right wing of the second line alongside Artemi Panarin and Ryan Strome. The fourth line of Motte, Kevin Rooney and Ryan Reaves remained intact.

The new-look top line was particularly effective despite the fact that Chytil, Kreider and Zibanejad only logged 2:06 of ice time together during the regular season. They doubled the Hurricanes shots, 10-5, while on the ice through two periods — and Chytil looked even more energetic than he’s already been lately with a top-six recognition. 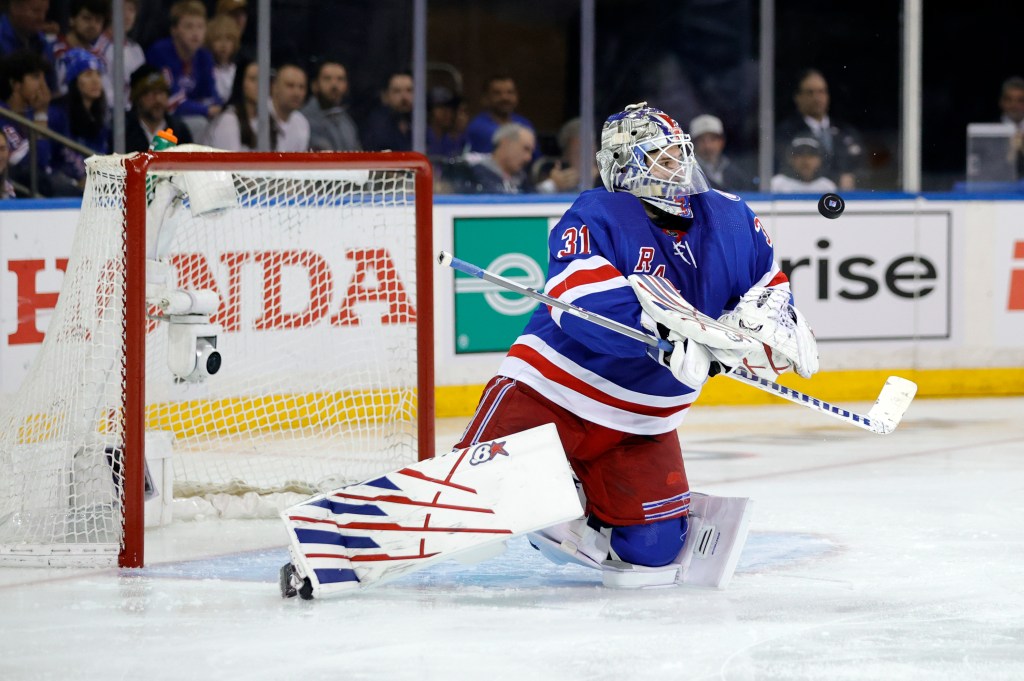 Igor Shesterkin makes a save during the Rangers’ Game 3 win over the Hurricanes. Jason Szenes

But Gallant reverted back to the combinations the Rangers had for the previous four games at the end of the second period.

The Rangers may have gotten off to a slow start, failing to record their first shot on goal until 6 ¹/₂ minutes in, but their power play made up for it and opened up the scoring to take a 1-0 lead into the first intermission. Zibanejad whipped one right under Raanta’s blocker off a no-look cross-zone feed from Panarin at 11:54, which ended the Hurricanes netminder’s 127:59 shutout streak.