There might be a box office surprise this weekend in Paramount’s horror movie Smile.

The Parker Finn directed and written pic was developed by Paramount Players and the studio took a wait-and-see approach as to where the pic would land: On Paramount+ or theatrical. Then Paramount held a testing screening, and Smile played to great results with fans literally shouting at the screen. The teens-budgeted film is looking at a high-teens start this weekend, but rivals believe $20M+ could be a possibility at 3,600 locations. The R-rated film is hot with the 17-34 set as well as Latino-Hispanic and Black moviegoers. Previews start Thursday at 7PM.

Paramount announced the release date back in late May when late September freed up. They’ve concentrated a bulk of their spending on digital, as well as spots during sports games. The first trailer that dropped three months ago has racked up an amazing 125M worldwide views, and has also trailered on such movies as Bullet Train, Black Phone, and Beast this summer. The pic recently played Fantastic Fest in Austin, TX. Critics have given it an 84% fresh rating, and for a pop film to earn such grades — that’s a very good sign for box office prospects. The last notable horror movie to open big was Universal/Blumhouse’s Black Phone which opened to $23.6M and had an amazing 3.8x multiple near $90M. Good horror has proven its worthiness for the big screen. Again, Smile could surprise.

Logline: After witnessing a bizarre, traumatic incident involving a patient, Dr. Rose Cotter starts experiencing frightening occurrences that she can’t explain. Rose must confront her troubling past in order to survive and escape her horrifying new reality.

Here’s the pic’s second trailer below: 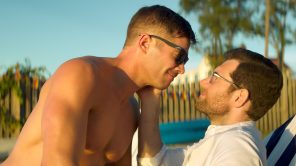 Smile is up against Bros, the Nic Stoller-directed Billy Eichner starring and co-scripted romantic comedy from Universal. Eichner has publicized Bros extensively and as the first LGBTQ studio comedy, and it is from a wide release perspective. We can’t forget about the feature adaptation of Harvey Feinstein’s Torch Song Trilogy, which also starred the playwright (and who makes a cameo in Bros); that gay dramedy being distributed by New Line back in 1988, but was a limited release. Going way back, The Boys in the Band, was one of the first major motion pictures to revolve around gay characters back in 1970, that William Friedkin directed movie adapted from Matt Crowley’s 1968 Off Broadway play. National General Pictures was the distributor. The 1978 UA release French-language release La Cage Aux Folles broke through at the box office grossing over $20M, a hit back in its day. MGM would remake that movie into The Birdcage in 1996 with Robin Williams, Nathan Lane and Gene Hackman; that movie being an enormous hit at $124M domestic, $185.2M WW.

Ticket sales for Bros will come from the big cities, we’re told, at 3,300 theaters. Unfortunately, the studio is only expecting a single digit opening at this point after Bros received rave reviews from critics at 96% on Rotten Tomatoes following its TIFF world premiere. Judd Apatow produced Bros. Showtimes start at 5PM. Previews start at 5PM on Thursday. 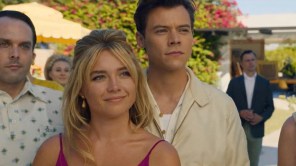 Last weekend’s No. 1 movie, Olivia Wilde’s Don’t Worry Darling, is pacing slightly ahead in its first five days at the box office than Woman King did. The Florence Pugh-Harry Styles-Chris Pine movie has taken in $23M so far after a $2M Tuesday, +20% over a $1.66M Monday. Woman King in its first 5 days grossed $22.6M. Don’t Worry Darling is expected to ease 55% to 60% in weekend 2 with around $7.7M.