The resiliency, the no-quit fire and the insatiable desire to be a winning club has been at the heart of the Rangers all season long.

And that is why this Rangers team was able to rally from a 3-1 series deficit, stave off elimination twice and then force overtime in Game 7 Sunday night before Artemi Panarin punched their ticket to the second round of the Stanley Cup playoffs 4:46 into the extra period to secure a 4-3 win over the Penguins in front of a sold-out Madison Square Garden.

This Rangers team became just the third in franchise history to overcome a 3-1 series deficit.

This Rangers team is now the first to reach Round 2 since they did it in the 2016-17 season.

This Rangers team is one step closer to the Stanley Cup.

Panarin joins the likes of Derek Stepan, who scored the overtime winner in Game 7 of the second round in 2015 against the Capitals, and Stephane Matteau, whose double-overtime score in 1994 defeated the Canucks and sent the Rangers to the Cup Final, as the players who have been OT heroes for the Rangers at the Garden with his power-play goal. 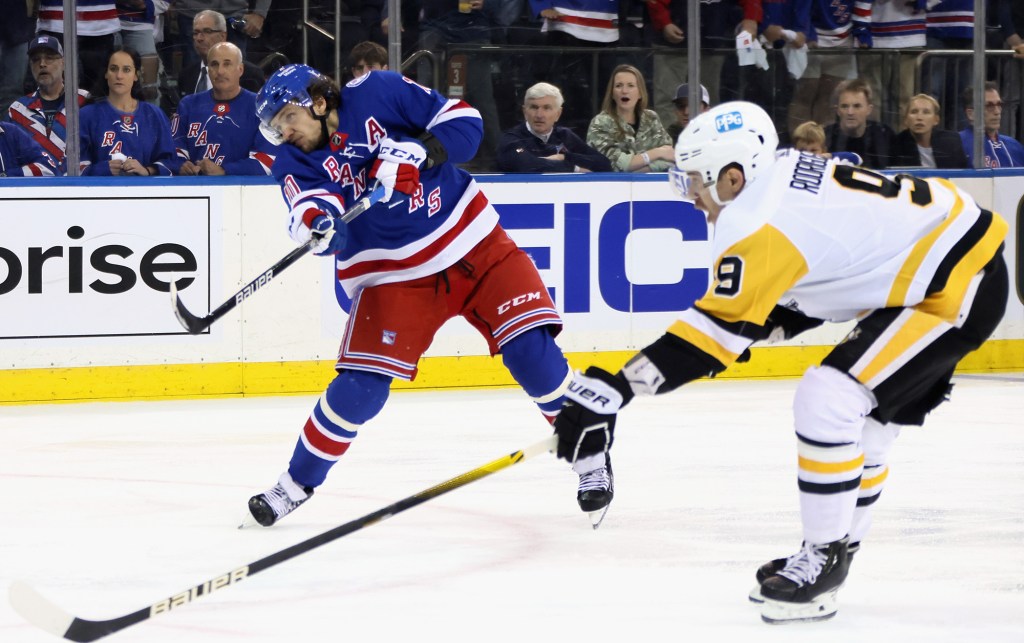 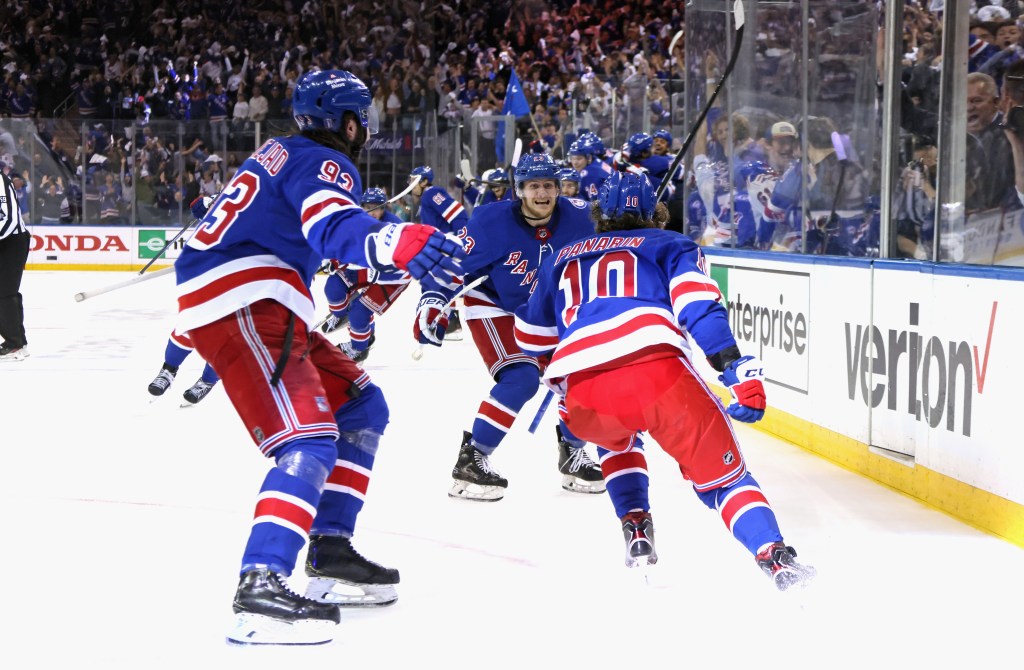 Mika Zibanejad, who scored his first goals of the series in Game 6, seized the moment when the Rangers were down one with 5:45 left in regulation. The Rangers’ top-line center wired the puck from the left faceoff circle past Penguins goalie Tristan Jarry to knot the game 3-3 and spring every Blueshirts fan in attendance out of their seats.

The Rangers came to win, played to win and deserved to win. 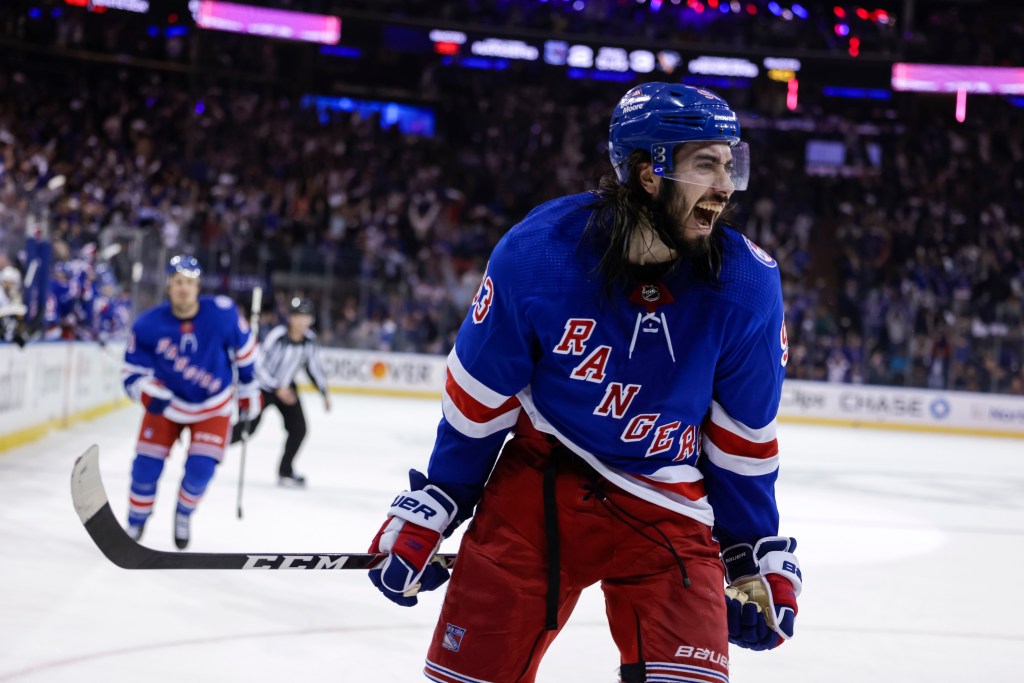 Mika Zibanejad celebrates after scoring a game-tying goal in the third period. Corey Sipkin for the NY POST 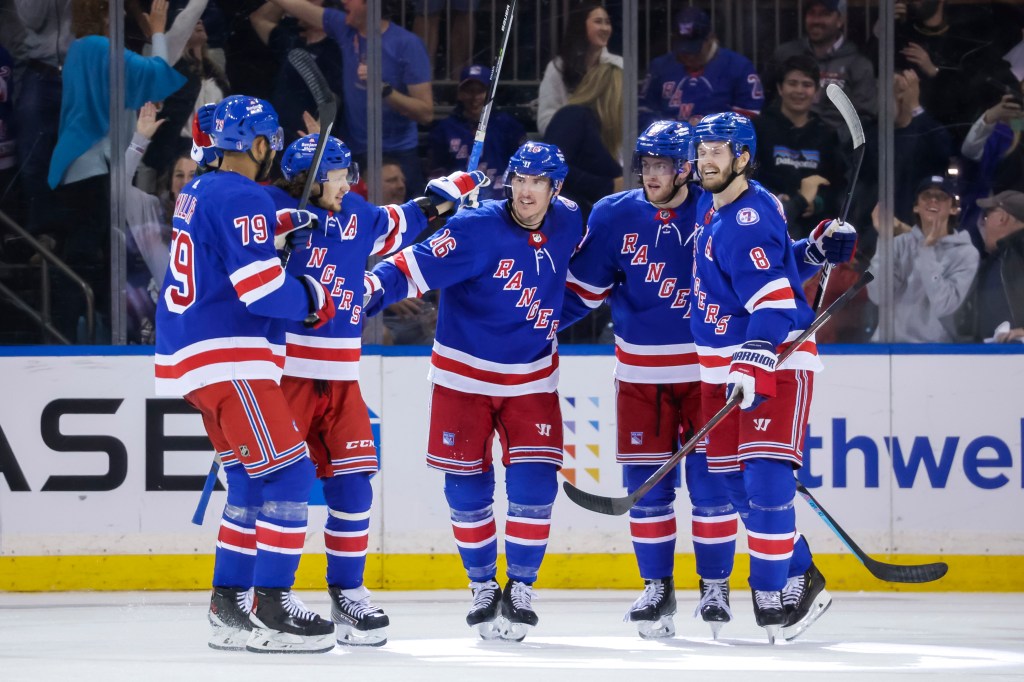 The Rangers celebrate during their win over the Penguins.Corey Sipkin for the NY POST

With the game tied 1-1 after a relatively even first period, the Rangers dictated the pace of play in the middle frame but only had one goal to show for it compared to the Penguins’ two.

The Rangers handed Pittsburgh two power plays in the first half of the second period, and Jake Guentzel capitalized on Kaapo Kakko’s delay of game infraction on yet another goal that had to go under review — the fourth of the series. The Penguins’ top-line winger kicked the puck up and batted it out of midair over Shesterkin for the lead. It went under review for a high stick but was ultimately upheld at 10:18.

Rangers defenseman K’Andre Miller responded just over a minute later, sending a long shot from the top of the zone that ricocheted off of Mike Matheson’s skate and in to even the score 2-2.

Post Sports+ members, sign up to have Mollie Walker text you the latest word on the Rangers and reply with your thoughts and questions. Not a Sports+ member yet? Try it now.

In the final second of the Rangers’ power play toward the end of the period, Filip Chytil turned the puck over right to Penguins fourth-liner Evan Rodrigues, who finished the shorthanded breakaway with a backhanded shot past Shesterkin for the lead at 17:24. 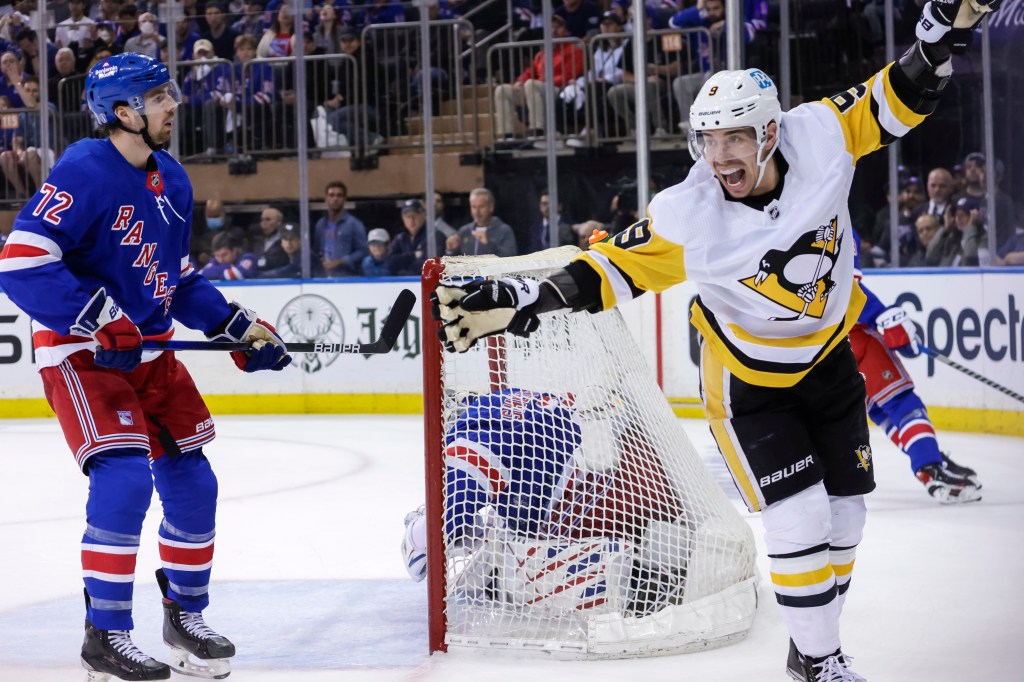 Evan Rodrigues celebrates after he scores the go-ahead goal. Corey Sipkin for the NY POST

Jarry was eased into his first game action since April 14 to the sounds of his name echoing from the Garden crowd. Finishing with 26 saves, Jarry made his series debut after he fractured his foot at the tail end of the regular season, which sidelined him in Games 1-6 of this series.

MSG made sure Crosby heard them, too. They taunted No. 87 early and often to try and rattle the Penguins star center.

Shesterkin appeared locked in early, and he denied four straight Penguins shots to allow Zibanejad and Chris Kreider to jump on an odd-man rush the other way. Zibanejad fed Kreider for a hard one-timer that beat Jarry and put the Rangers on the scoreboard at 7:36.

The goal tied Kreider with Mark Messier for the second most playoff goals in franchise history at 29, behind only Rod Gilbert’s 34 postseason tallies.

On the Penguins third power play of the opening 20 minutes, Danton Heinen scored but play went on. The sequence then went under review and it was quickly deemed a goal to make it a 1-1 game just over a minute before the first intermission. 7 Alec Baldwin mocked for yelling at staffer in Spanish:...