It’s a huge weekend of college football ahead, with conference championship games galore. Our handicappers Adam Burke, Tim Murray and Wes Reynolds are here to give you their best bets for two games on this weekend’s card.

Reynolds: These two clubs just played two weeks ago with Utah winning 38-7 as 3-point home favorites over then-No. 3 Oregon. The Utes rolled to a 28-0 halftime lead and never looked back. Utah RB Tavion Thomas and QB Cam Rising combined for three first-half TD runs and Britain Covey returned a punt for another TD near the end of the first half.

After Charlie Brewer transferred out of the program, the Texas transfer Rising took over as Utes starting quarterback and Utah has since won eight of nine games. Rising has gone 172 of 274 passing (17 TDs, 3 INTs) for 2,109 yards, adding 54 carries for 346 rushing yards (6.4 yards per carry) and five rushing touchdowns. Utah’s offense averaged 29 PPG and 372 YPG in Brewer’s three starts, but has been “rising” (no pun intended) with Rising; in the last nine games, the offense has averaged 37 PPG and 455 YPG.

Both teams have revenge on their minds as Oregon wants to pay Utah back for two weeks ago, and the Ducks (in their third straight title game) defeated Utah in the 2019 Pac-12 Championship. Meanwhile, Utah is here for the third time in four years.

This time around, the Utes will not have the altitude advantage and the loud crowd at Rice-Eccles Stadium. Utah went 6-0 SU and 3-3 ATS at home while allowing an average of just 15.8 PPG. On the road, Utah was a different team going 3-3 SU, 2-4 ATS and surrendering 27.1 PPG.

The Nov. 20 result is fresh on the Ducks’ mind and they should like the faster track indoors at Allegiant Stadium in Las Vegas.

Burke: All of the pressure is on Cincinnati in this game. A win not only means a conference championship, but likely the first-ever Group of Five College Football Playoff berth. Houston isn’t exactly playing free and easy, but there aren’t nearly as many expectations for the Cougars.

Both teams played weak schedules. Per Sagarin, Cincinnati comes in with the 87th-ranked strength of schedule, due in large part to the games against Notre Dame and UCF. Houston did not play UCF and comes in with the 123rd-ranked strength of schedule. In fact, the only teams Houston played that finished the season with a winning record were East Carolina and SMU. SMU lost four of five to end the season and ECU held Houston to 256 yards. Houston beat SMU on a kick-return touchdown. 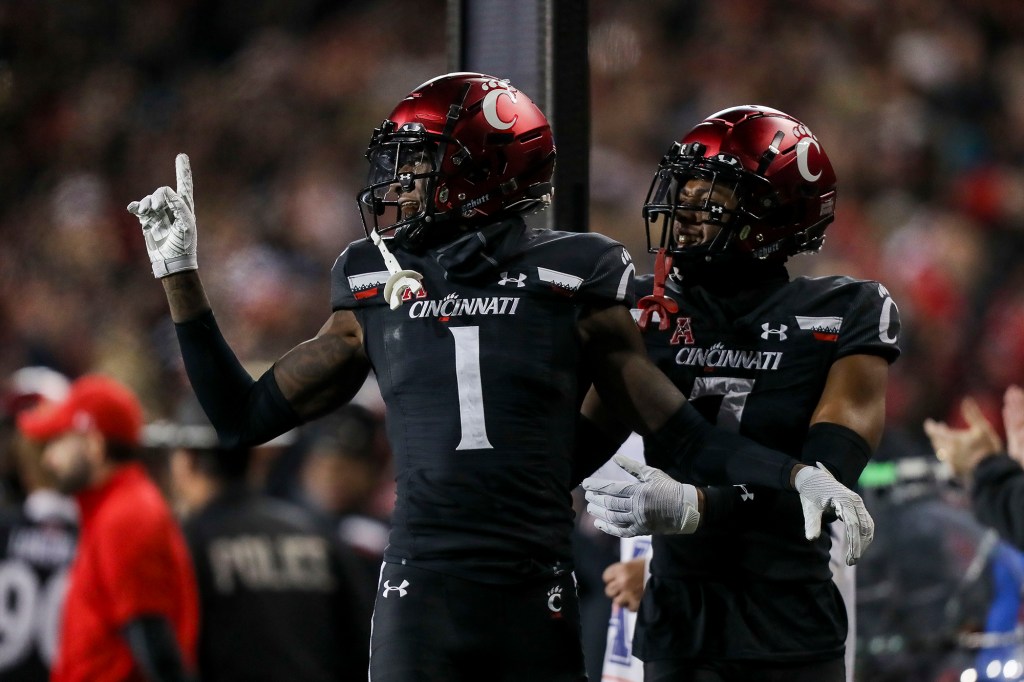 Cincinnati is a different kind of animal. While the Bearcats did struggle a little bit throughout the season, this is still one of the nation’s best in yards per play differential at +2.52. Only Georgia grades higher and the Bulldogs have had an historic season.

There are some areas in which Houston stands out, including red-zone success on both offense and defense, as well as third-down defense, where the Cougars rank in the top five. The level of competition has had a lot to do with those numbers, though. Cincinnati is better than SMU and ECU, and Houston had all sorts of issues with those two teams. The Bearcats got their scare against Tulsa and then righted the ship.

This should be another suffocating defensive performance for Cincinnati and the offense will do enough to cover the number.

Murray: The College Football Playoff is within reach for Cincinnati. If Georgia beats Alabama in the SEC Championship and Cincinnati wins this game, the Bearcats should become the first Group of Five team to reach the CFP. That is a lot of pressure. However, the Bearcats got the fortune of playing at home on Saturday. Additionally, all the rumors of head coach Luke Fickell heading to Notre Dame to replace Brian Kelly are gone. The Irish will reportedly promote Defensive Coordinator Marcus Freeman to fill the vacancy, so you can remove that distraction for the Bearcat players.

Cincinnati received its fair share of criticism in the middle of the season after it had a stretch of going 0-4 ATS against the Navy, Tulane, Tulsa and South Florida. However, the Bearcats finished the season strong, covering against SMU and on the road at East Carolina. The strength of the Bearcats is their defense. Cincinnati is holding its opponents to just 4.29 yard per play, third-best in the country, and is second in the nation in passing efficiency defense, trailing only Georgia. The Bearcats have a pair of elite cornerbacks in Ahmad “Sauce” Gardner and Coby Bryant. According to Pro Football Focus, Gardner allowed fewer than 20 yards in every single one of his 12 starts and allowed only 96 yards in total across 390 regular-season coverage snaps. Translation: Good luck throwing the ball on Saturday, Clayton Tune.

While Cincinnati did not have a daunting schedule this year, as Adam pointed out, Houston played an even weaker schedule: The Cougars only played two teams that finished with an above .500 record. Additionally, the best defensive team Houston faced this season was Navy (46th in yards allowed per game).

South Point Sportsbook Director Chris Andrews said on “The Night Cap” this week that his numbers make Cincinnati around a 14-point favorite against Houston. DraftKings Sportsbook on Thursday morning reported that 73 percent of the handle was on Houston +10.5. Is there a “trendy dog” situation brewing? ESPN’s Chris Fallica pointed out that in the two meetings between Dana Holgorsen and Luke Fickell, Cincinnati won and covered both times. The Bearcats were north of a touchdown favorite in both games including in last year’s 38-10 win over Houston.

The Cougars do have a strong defense, but I don’t see Houston having much success offensively on Saturday afternoon at Nippert Stadium.