At the conclusion of what clearly had been another frustrating first half for the Knicks, TV cameras caught Julius Randle and teammate Evan Fournier in a heated discussion on their way to the locker room Thursday night at the Garden.

Both veteran players acknowledged following the Knicks’ 119-115 loss to the Bulls that they had a disagreement before clearing the air at halftime.

“I just saw something and the biggest thing is communication, I can’t let things stay in and be frustrated. I’ve got to talk to my teammates,’ Randle said. “I think the biggest thing is, you saw that interaction, and it looks like we’re arguing, whatever it was. 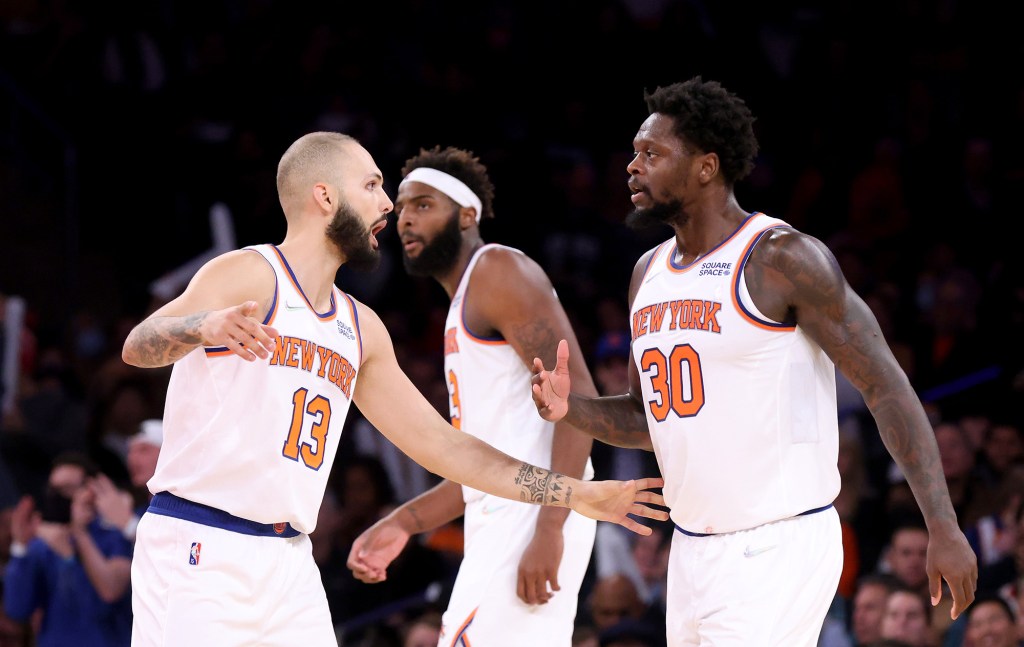 Randle and Fournier combined to lead the Knicks back from an 18-point halftime deficit to take the lead, before they fell short to drop to .500 (11-11) for the first time this season.

“It was a disagreement over I think the last defensive play about the double [team] and the rebounding,” Fournier said. “It was just frustration. But I think the key was it was communicating.

“I would rather have that than not saying anything and hold grudges and stuff. So, stuff like that happens all the time and I’m glad it happened, because we played much better in that third quarter.”

The illness that sent RJ Barrett to the locker room in the second quarter of Tuesday’s loss in Brooklyn also kept him sidelined Thursday night.

Barrett, the only player to appear in all 72 games for the Knicks last season, sat out for the first time this year with what the team is calling a non-COVID related illness. Rookie center Jericho Sims also was ruled out for the same reason.

Nerlens Noel was sidelined again with a sore right knee after playing in the previous five games. The 6-foot-11 center also had missed 12 of the team’s first 16 games in two stints with knee issues.