The Trail Blazers weren’t supposed to have a superstar available Friday night, due to Damian Lillard’s calf strain.

But there had to be some mistake — because it seemed like they had two of them in uniform. Anfernee Simons and Jerami Grant combined to torch the Knicks for 82 points in a 132-129 overtime victory that saw two of the home team’s big three — Julius Randle and RJ Barrett — struggle again.

Jalen Brunson (32 points) nearly carried the Knicks to victory at the end of regulation, but his short jumper was just off the mark. In overtime, Simons hit a pair of long 3-pointers to finish with 38 points, and Grant threw in a career-high 44, 21 of which came at the free-throw line. Barrett (19 points, 10 rebounds), meanwhile, shot just 6 of 22 from the field, as his prolonged shooting slump continued. Immanuel Quickley scored 18 points off the bench for the Knicks, who fell to 9-10 and have lost four of five at home. 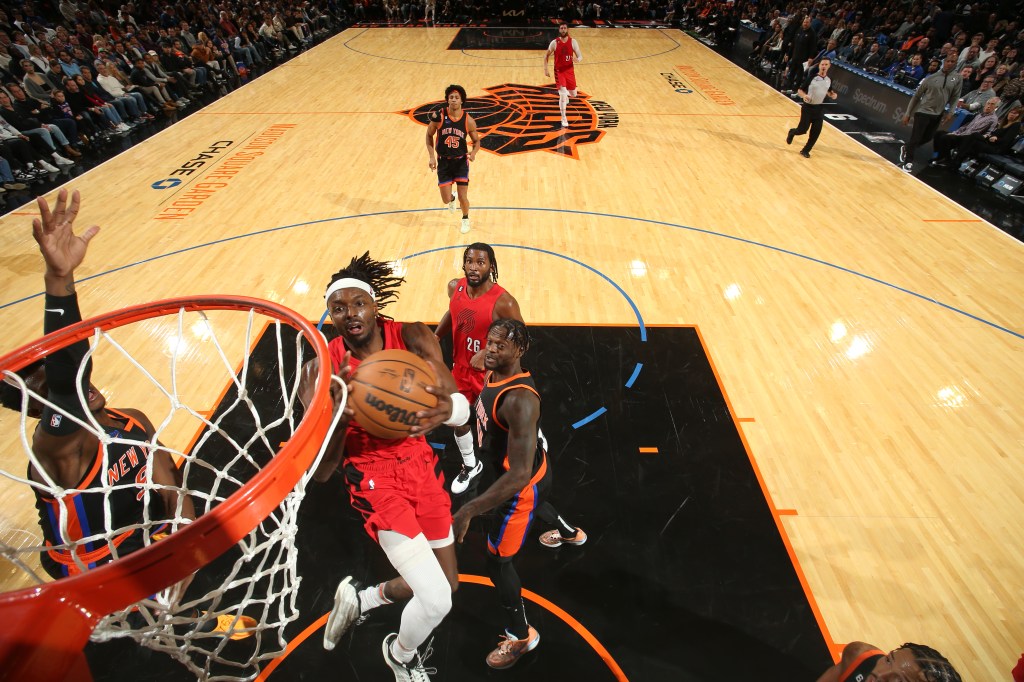 Jerami Grant scores during the Raptors’ loss to the Knicks. NBAE via Getty Images 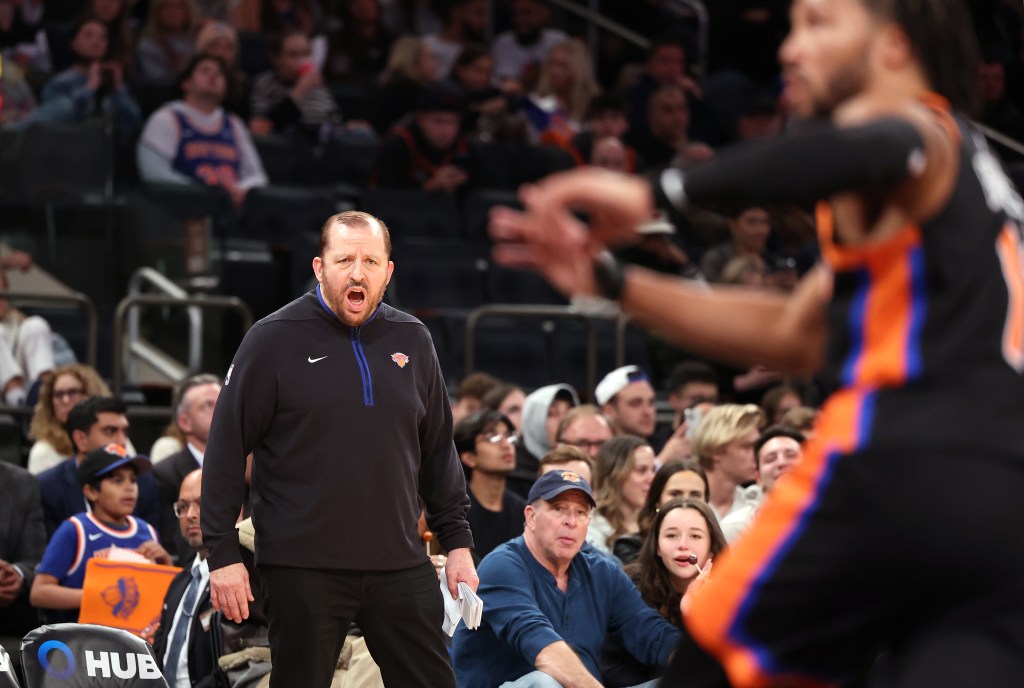 Tom Thibodeau reacts during the Knicks’ loss to the Blazers. Robert Sabo for the NY POST

Jericho Sims’ three-point play got the Knicks even with 2:49 to go and Brunson’s two free throws gave them the lead 35 seconds later. But Joseph Nurkic and Grant answered with consecutive baskets to give the Trail Blazers a three-point edge in the seesaw final quarter.

The Knicks responded, and drew even on Barrett’s transition layup that was set up by Randle knocking the ball out of Grant’s hands. Brunson then scored inside, giving the Knicks a two-point edge with 13.7 seconds left. Simons’ two free throws on the other end forced overtime.

Over the final 5:54 of the first half, the Knicks lost their commanding grip on the game, blowing a 14-point edge. Their defense sagged and their offense bogged down. The Trail Blazers scored 23 of the final 31 points of the second quarter, with Grant scoring nine of those points. Randle’s jumper was the Knicks’ lone field goal over the final 3:28, turning a feel-good half into a concerning one. 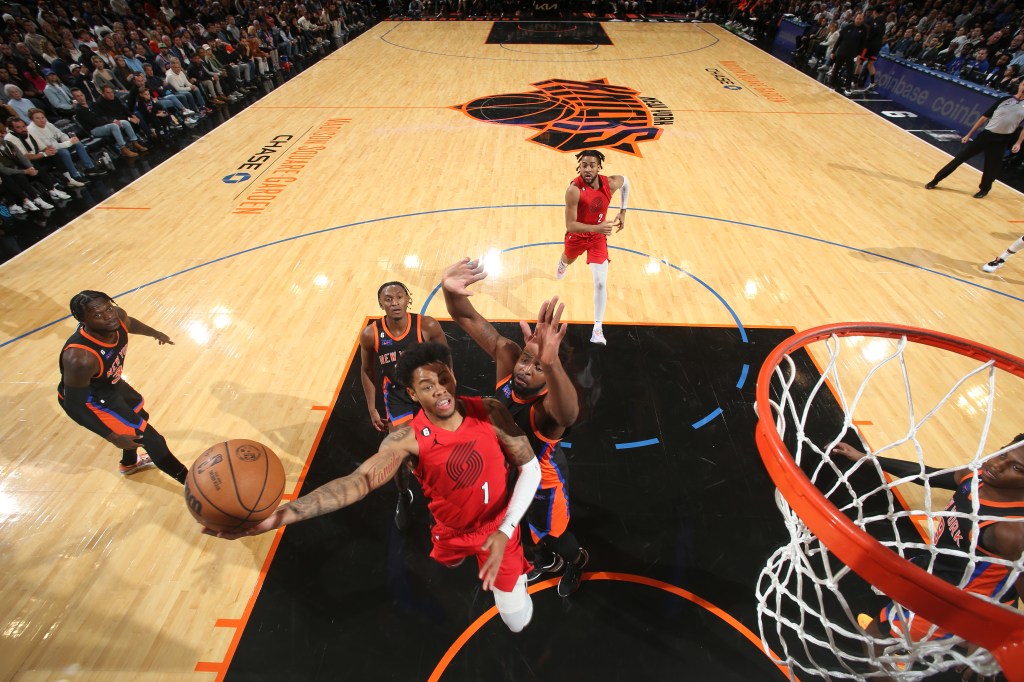 Anfernee Simons scores during the Blazers’ win over the Knicks. NBAE via Getty Images

Before the end of the opening half, a lot had gone right for the Knicks. Quickley scored eight quick points to close the first quarter and Brunson picked up where he left off against the Thunder on Monday, pouring in 16 points on eight shots.

The Knicks’ defense let them down, but it wasn’t on the perimeter, where they have struggled on occasion. They held Portland to 5 of 17 shooting from distance over the first 24 minutes, but sent the Blazers to the free-throw line 28 times — 24 coming in the unsettling second quarter — and allowed them to make 13 of 21 2-point shots. Grant, in particular, thrived by hitting 12 of 14 from the charity stripe. Seven different Knicks committed at least two personal fouls. 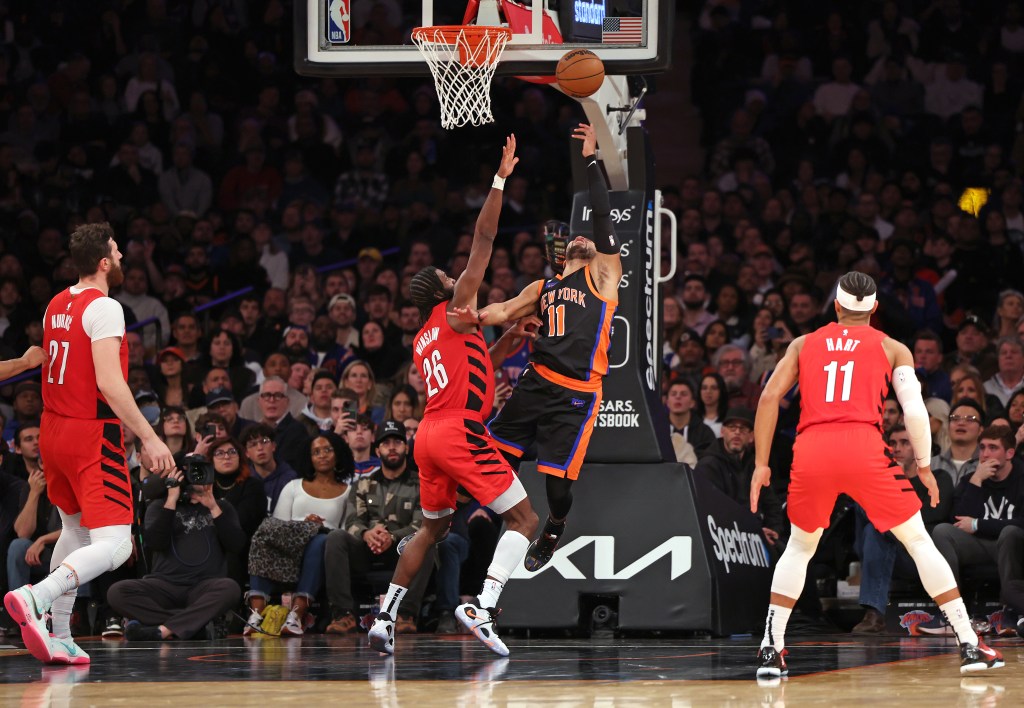 The Knicks defended better without fouling in the third quarter, but their defensive rebounding negated strong possessions. In that stanza alone, Portland had six offensive rebounds that it converted into eight second-chance points, and took a six-point lead into the fourth quarter on the strength of an 11-4 run to close the period.

With Mitchell Robinson blocking one shot and changing a few more, the Knicks started much better on the defensive end in the fourth quarter. They held the Trail Blazers to just five points over the first 5:09 of the quarter, going ahead by four. They, however, couldn’t keep the lead, and paid for it in overtime.