The early returns are overwhelmingly positive. Tom Thibodeau’s lineup shuffle — moving reserve Alec Burks into his starting five and taking Kemba Walker out of the rotation — may have sparked something with these Knicks.

Since Thibodeau’s tweaks, his team has notched a quality road win over the Hawks — the team that ended the Knicks’ season last June — and suffered a narrow defeat against the Eastern Conference-leading Nets in Brooklyn. In both games, Burks led the Knicks in scoring as their new starting point guard — while averaging six rebounds, four assists and two turnovers — and they defended better, holding the explosive Nets and Hawks in check.

“Well, it gives us size,” Thibodeau said on Wednesday following practice as the Knicks prepared to host the Bulls on Thursday. “That’s a big thing. It gives us more things that we can do defensively.”

It is also far too early to make any definitive statements about the move. Too early to tell if Thibodeau pulled the plug on the struggling 31-year-old Walker too soon after he signed a two-year deal worth $18 million over the summer to play in his hometown. Too early to know if the 6-foot-6 Burks can handle the point, a new position for the veteran wing. Too early to say if Thibodeau weakened one of the Knicks’ strengths — their bench — by promoting Burks. The new five of Burks, Julius Randle, RJ Barrett, Evan Fournier and Mitchell Robinson have played just minutes together. 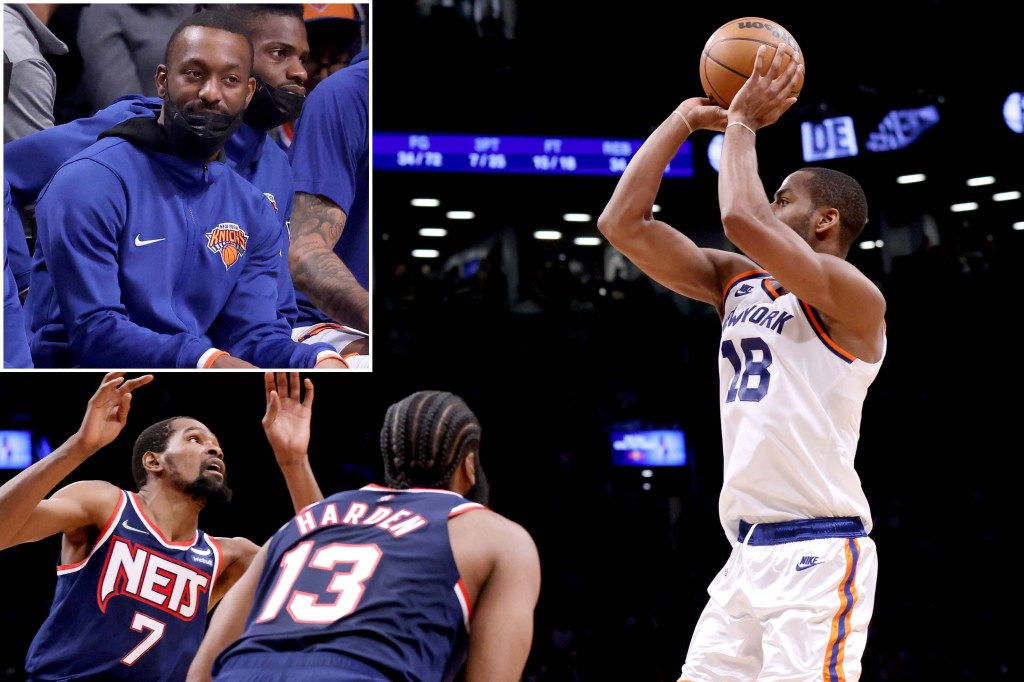 The Knicks have gotten a spark so far by playing Alec Burke over Kemba Walker.N.Y. Post: Charles Wenzelberg (2)

“It’s kind of hard to answer, because we need to see a bigger sample,” said Fournier, one of the Knicks’ two big offseason additions, along with Walker. “It’s hard after two games to say, ‘OK, we’re going to be better now.’ Kemba and Alec are different players. They bring different things to the table. So wait and see, really.”

Thibodeau didn’t seem to agree with the small sample-size argument, since Burks has played with many of the starters before, just not at the start of games. He also didn’t put a number of games on how long he will give his new starters. He seems to believe another change soon won’t be necessary. The Knicks had the worst defensive rating in the NBA when Walker was on the floor and were 27th in offense, and far better otherwise, second in defense and tied for seventh in offense.

“This is where we are. We’ve been there,” Thibodeau said. “So it’s not like this just happened. We’ve played this lineup a lot. So we have a good sample size.”

The Knicks coach also downplayed the significance of the position change for Burks. The Knicks have a number of players who handle the ball, in particular Randle and Barrett among their starters. The NBA has changed, too, in terms of how teams utilize point guards.

“At one point you had all pass-first guys. Now there’s scoring point guards, there’s power point guards,” Thibodeau said, pointing to his time with the Bulls when he used Jimmy Butler and Joakim Noah to initiate offense when Derrick Rose was injured. “There’s a lot of different definitions as to what a point guard is.”

Fournier was admittedly surprised by the move, though he wasn’t questioning Thibodeau’s decision. The Knicks’ starting unit was not playing up to standards as constituted. Far too often, the group was either digging a hole or giving back a lead. It’s one of the reasons the Knicks haven’t been able to string together consecutive wins since the end of October.

“I’ve said many times, it’s going to take a little bit of time,” Fournier said. “But the truth is there’s no time during the season. We need to win games now.”