The Yankees are so good they keep sending a guy to the minors who has a 0.00 ERA. And no, JP Sears can’t do much better than that.

Sears is the unheralded spot starter they summon from Scranton on those rare occasions something doesn’t go perfectly (like the schedule, the weather or a positive test) and a sixth starter is needed.

The slightly built lefty came up again, and you couldn’t tell much difference between him and the stars who populate the regular Yankees rotation. That is to say, he dominated.

The headliner in this historic start by the Yankees is Aaron Judge, who’s almost hallway to the MVP. But the story is about all the unheralded guys who are contributing, even a guy like Sears who’s a cameo player.

Last time, after shutting down the Orioles, who are suddenly resurgent, he waited outside Yankee Stadium for a car ride back to join the Scranton/Wilkes-Barre RailRiders of the oddly named International League. The plan was the same again this time. So after holding the A’s to three hits and no runs in 5 ²/₃ innings in the 2-1 Yankees victory, he again got his marching orders to the minors.

“I take it week by week,” Sears said. “I just get ready for the next outing, and I don’t think past that.”

It’s an unusual existence, but he does it well. Just like almost all the other Yankees, full- or part-time. 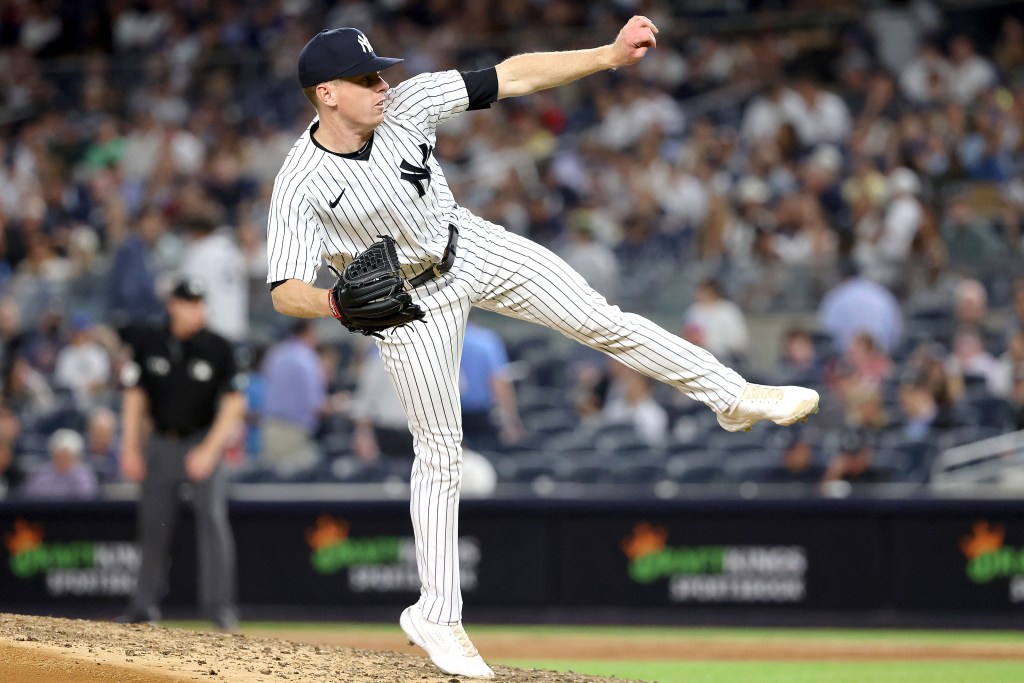 Even on a night where stars Judge and Anthony Rizzo combined for no hits (and five strikeouts), and their running mate Giancarlo Stanton rested, the Yankees won as per usual.

The team from The Bronx can do no wrong, and for a change this time they didn’t even spot the opponent a run or two or a few. No need for a league-leading 24th comeback win, as the A’s couldn’t muster much off Sears, the former 11th-round draft choice who like so many others was discarded by the Mariners for nothing or next to nothing.

The Yankees’ 55-20 start is tied for the second-best start in franchise history with, you guessed it, that great 1998 team. That team won the World Series, as did the one Yankees team with a better 75-game beginning, the 1928 Yankees team that began one game better, as 56-19.

Judge accounts for a lot of the wins, of course, and as the fans tell us every night, is the “MVP” to this point, without too much question (Jose Ramirez, Mike Trout and a few others are doing well, but they aren’t putting their stamp on the season like this guy).

And yet, we are reminded time and again this is no one-man show. Many of the complementary players are performing like stars — and we aren’t even talking about the Sears shuttle.

For a $250 million roster, these Yankees are full of bargains, a testament to GM Brian Cashman and staff, who plucked some real gems from the scrap heap. They have Matt Carpenter working out in the outfield now, and while it’s likely just to give them another emergency option, if they can get his bat in the lineup more, that would be a real plus. His 1.209 OPS is even higher than the MVPs, never mind Joey Gallo’s.

Marwin Gonzalez, the super utilityman signed originally to a minor league deal, continues to make contributions while manning many different positions. “He’s been great,” manager Aaron Boone said. “Anywhere you put him on the field you feel good about it.”

Gonzalez homered against A’s ace Frankie Montas, who was pitching in a showcase here. Montas is expected to be either the No. 1 or 2 rotation trade option out there, though as of a few days ago, teams were just starting to contact the A’s.

The Yankees surely are on the lookout for anything that can help. But the way things are going they can afford to be very picky. They are dominating the league like few have before.

The Yankees lead the American League with 376 runs, and they’ve also given up the fewest runs with 228 allowed. Beyond that, their defense has miraculously gone from poor to excellent thanks to a couple key moves — bringing in Isiah Kiner-Falefa to play shortstop and Jose Trevino to catch, especially Trevino, who leads the league in many defensive categories.

Trevino picked off Sheldon Neuse and caught Christian Bethancourt stealing. The A’s use Bethancourt, who nearly converted to a pitcher a couple years ago, as their No. 3 hitter, and can ill afford to waste chances.

Even better, Trevino is hitting up a storm, something that could never be imagined in Texas. Well, Trevino went to work with a hitting guru near his hometown of San Antonio, and he is good enough to sometimes bat fifth for the vaunted Yankees, as he did Tuesday night. Trevino, with his wry smile, declined to provide the guru’s name, so you know he must be good.

In addition to his defensive wizardry, Trevino scorched a hard ground single to bring home DJ LeMahieu with the Yankees’ first run. And with Sears on the mound, that’s all they’d need.