For a little over 20 minutes on Sunday you wondered whether, for the third game running, the Islanders would lose despite playing reasonably fine hockey. And then all at once, the floodgates opened and that notion was washed away, replaced by two points — a potential blip on the radar erased before it even appeared in full.

When the Islanders had stopped their scoring and the hapless-by-choice Blackhawks had left the building, the final score was a workmanlike 3-0, the record was 16-10-0 and the Isles had done what playoff teams are supposed to do: pick up an easy victory at home against one of the league’s worst teams.

In real time, the first and ultimately fatal blow was noticed not by the referees, nor the crowd, nor really by anyone besides Matt Martin, whose falling shot got past Arvid Soderblom and trickled over the goal line at the near post, but bounced back out before anyone other than Martin saw it cross over. As play continued, it looked as though Martin was asking for a tripping call as he gesticulated when in fact he wanted the play reviewed.

And over two minutes of play later, when the play was finally reviewed, it turned out Martin had scored to give the Isles a 1-0 lead at 8:58 of the second period. 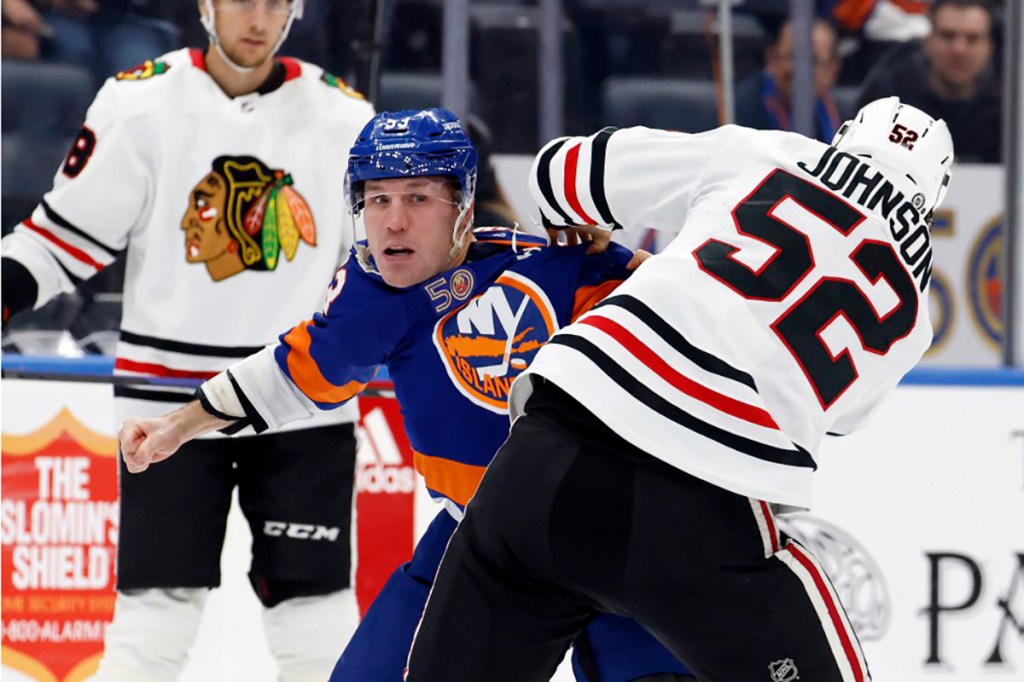 Casey Cizikas of the Islanders and Reese Johnson of the Chicago Blackhawks get into it on Sunday.Paul J. Bereswill

It did not take all that long from there for the Islanders to wrest firm control of the match.

The 2-0 goal came from Zach Parise at 14:31 of the second, on a deflected Adam Pelech shot. The 3-0 goal came less than a minute later, at 15:14, when Brock Nelson beat Soderblom on a rush feed from Anthony Beauvillier. And so went the competitive portion of the evening.

From there, the last 20 minutes became a formality, just as the first 20 minutes had been forgettable. Reflecting the score, the Islanders had more than doubled Chicago’s shot total at the end of 40 minutes, leading 30-14.

A mostly uneventful first period was notable only for Reese Johnson and Casey Cizikas dropping gloves toward the start, seemingly in retaliation for Cizikas injuring Chicago netminder Alex Stalock when the two teams played at United Center last month. 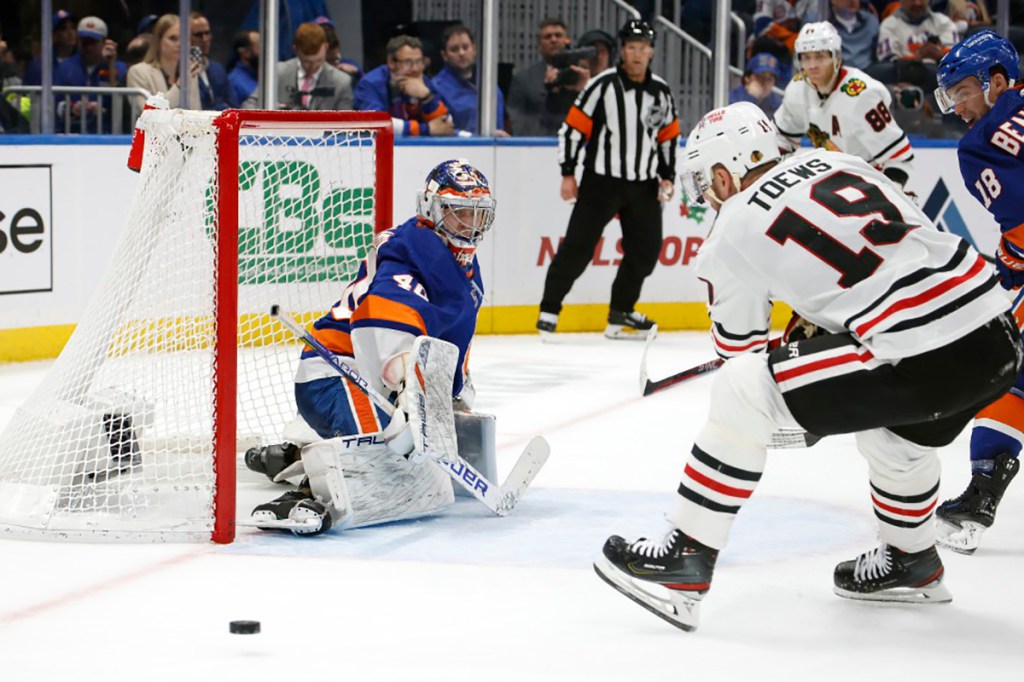 Semyon Varlamov makes a save for the Islanders.Paul J. Bereswill

In a year when not many Islanders wins thus far could be described as routine, this one very much was. They dominated the shot count, kept the defensive-zone structure intact — particularly without the puck — and kept Semyon Varlamov well outside of trouble.

On paper, this should have been a forgettable win. On the ice, it was. And in a match, where banking points was critical, the Islanders did just that. They also avoided their first three-game losing streak since mid-October.

With the schedule soon turning tough, with one more home game against a sub-.500 opponent before the Islanders face three of the four Eastern Conference teams ahead of them on points in succession, it’s critical to net the easier points while they can. After failing to do so in Philadelphia and against Nashville, it was mission accomplished against the Blackhawks.

Oh, and if Chicago’s weekend trip to New York served as an audition in the Patrick Kane sweepstakes, then the final score of that was Islanders 1, Rangers 0.