“I Hope Boris Is Flattered”: Michael Winterbottom On Casting Kenneth Branagh As The British P.M. In Sky’s COVID Drama ‘This England’ When it was announced that Michael Winterbottom would be making a series about the first pandemic lockdown in the spring of 2022, many assumed—or perhaps hoped—that the politically committed director would be holding the British government to account. However, speaking to Deadline at the 38th Sarajevo Film Festival, 25 years after his acclaimed war drama Welcome To Sarajevo screened there, Winterbottom revealed that, in common with many of his fictionalized but factual feature films, the six-part Sky series This England , which debuts 21 September, will be an ensemble piece, taking a bird’s-eye view of the British authorities’ initial response to COVID.

“Boris is just one strand that runs through it,” he said, “because it’s really a mosaic of lots of different stories. The most enjoyable part was the research, really, because we started it straight after the first wave, in June 2020. We got to talk to lots of scientists, people working at SAGE [The Scientific Advisory Group for Emergencies], lots of doctors, nurses, care-home workers—and people, obviously, that had COVID. So it’s a collage of all their stories interwoven into … a diary almost. It’s really a diary, or chronicle, or calendar of the first wave, so it finishes at the end of May 2020.”

Although plenty of news stories emerged from the pandemic, notably the notorious “Partygate” scandal involving illegal lockdown gatherings at Johnson’s 10 Downing Street home, Winterbottom insists that the focus is on the broader picture. “We’re just trying to chronicle what happened,” he said, “and my assumption is, and I think it’s true, that everyone was trying to do their best. No one wanted to make mistakes. The virus was spreading incredibly quickly—I mean, if you think about what was happening at the beginning of March 2020, eight days later it was a totally different situation, so the idea of the rhythm of the series is to try and keep that pace. As you’re watching the series, you’re reminded about all these things that you remember living through. One moment it seemed to be just something that was happening in China, the next moment it was happening in Italy, then it was with us in the UK, but not too bad, and then suddenly it was everywhere. And that sense of trying to catch up is what we’re hoping to capture in the series.” 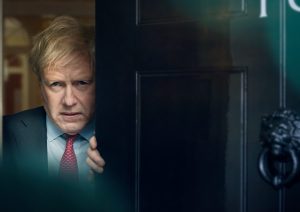 Kenneth Branagh as Boris Johnson in ‘This England’ Fremantle

Winterbottom explained that he didn’t originate the series, which was proposed to him by Fremantle in June 2020. “It was as vague as, ‘Would you like to do something about Boris Johnson and COVID?’” he recalled. “So it’s taken two years. The writing process was pretty fast, and then we shot mainly last year. The editing has been quite slow. But the shooting was quite complicated because we were trying to get into care homes, trying to get into hospitals. And when we started pre-production, the third lockdown had just started, so we were back in lockdown again.”

Branagh, though, was Winterbottom’s definite choice to star, and the actor came on board immediately after reading the first draft of the script, which was co-written with Kieron Quirke. “Ken said yes,” said Winterbottom. “But he only had eight weeks, in March and April. So I was like, ‘OK, that sounds just about possible.’”

“Well, it’s a complicated choice,” he laughed. “Who else would play Boris Johnson? And I hope Boris is flattered that we picked Kenneth Branagh to play him. Ken’s done a great job. But, to be honest, it’s not a character piece. Boris/Ken is just the central character in the story. With everyone else, we’re really just looking at their work in relation to this pandemic. You don’t see anyone’s back story, you don’t see who they are, their families, you just see what they’re doing in relation to the pandemic. So, in a way, it’s the narrative of the pandemic that drives the whole series.”

Nevertheless certain events included in the show are sure to rattle some skeletons, notably the controversial visit by government advisor Dominic Cummings to Barnard Castle during lockdown. “We’ve just stuck to what happened,” said Winterbottom. “We’re showing what happened, and we don’t make any comment on it. We just show the way in which that story came out, because we’re also showing the way which scientists investigated the virus. It was amazing work that they did, to so quickly get the genomes, to so quickly get the vaccine, and we’ll be showing all that, too.”

With This England only weeks away from airing, it should be no surprise that the prolific director has yet another feature film on the starting blocks. “We’re in Italy about to start shooting on Promised Land,” he said. “I think we’ve wanted to make it for a decade—it’s a story set in Tel Aviv in the 1930s, when it was part of the British mandate, and it’s a thriller about two British policemen, played by Douglas Burns and Harry Melling, who are chasing [Jewish activist] Abraham Stern, who was trying to blow them up.”

Why has he been pursuing it for so long? “I can’t even remember why, but we started researching that story maybe 15 years ago,” Winterbottom said. “It’s actually a very small story: it’s about two British policemen, a Jewish woman that one of them is in love with, and Stern. So it’s a very contained story, but I think it shows the way in which violence or extremism can push people apart—the way people who can work together in a normal situation are gradually driven apart through the use of violence.”