Do you even lift, bro?

Steve Keeler is putting even the most ripped weight lifters to shame by setting a new world record for the heaviest dead lift — with just one middle finger.

The retail manager from Shepherdswell, a village in the Dover district of Kent, broke the previous world record that stood for a decade when he deadlifted 285 pounds — that’s as “heavy as a three-seater sofa” — for eight seconds in front of several official witnesses.

“It’s such a random record, but it is mine. It’s just something I thought I’d have a bit of fun with and nothing to take too seriously,” Keeler told South West News Service. “I was delighted to find out I had won. It was a lockdown project, something to tell the grandkids.”

‘It’s incredibly painful — but my fingers are strong, and I am proud of my lift. It’s not the weight that’s the hard thing to lift, it’s getting through the pain.’

Steve Keeler, 48, a black belt in karate and judo.

Keeler lifted six iron weight discs at the same time: a smaller one measuring roughly 22 pounds, one 44 pounds, three measuring a little over 55 pounds each and one measuring 57 pounds.

Keeler, who has studied martial arts since his teens, began weight training about four years ago. During the pandemic, he was “playing around” in his friend’s home gym when he realized he was close to breaking the random record.

“In lockdown we were doing some gym work, and after messing about with some of the weights, I moved a weight that was quite heavy with one finger,” Keeler said. “We set challenges to see how heavy we could get, and I wondered what the world record was. It wasn’t much more than what I’d lifted.”

The previous record was held by Armenian Benik Israyelyan at 268 pounds, only 110 pounds more than what Keller hoisted while “messing about.” 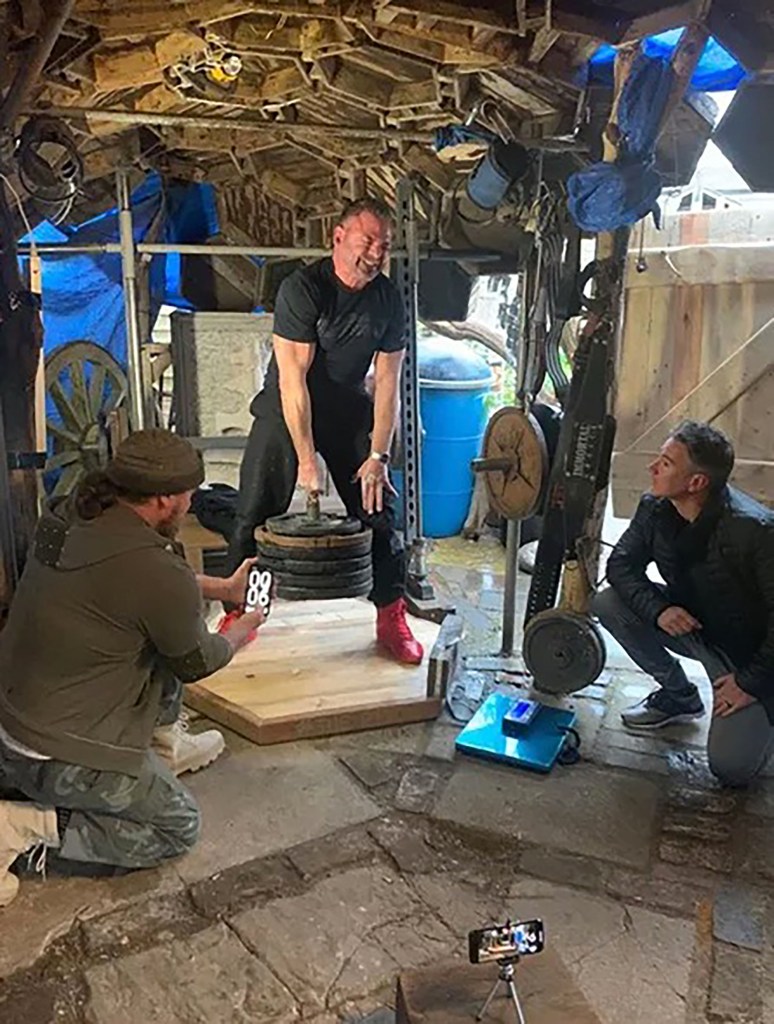 Despite setting the world record, Keeler isn’t completely satisfied. He is already considering training to beat his own record: “I think I’ve got 150 kilograms [330 pounds] in me.”GWR/Triangle News

Once Keeler discovered how close he already was to shattering the world record, he began training and eventually managed to lift 17 pounds heavier than the world record.

“It’s incredibly painful — but my fingers are strong, and I am proud of my lift,” Keeler said.

He added, “It’s not the weight that’s the hard thing to lift, it’s getting through the pain, and if you can do that, then you’re fine. You have to get over the pain, you can’t just succumb to it — you’ve got to get through it. That’s something I’ve always trained for.”

The black belt credits his many years in martial-arts training with giving him extremely strong hands and a high pain tolerance.

Keeler dedicated his win to his stepfather who he notes as his hero.

“My stepdad was my absolute hero, and when I was a child, he came into my life and helped me with a problem I had with my bicycle. He brought a spanner round to get the pedal off my bike, and he pushed that spanner so hard he broke it,” he remembered.

“He was into his strength training and this record would be in honor of all he taught me. He’d be absolutely chuffed to bits.”

Despite setting the world record, Keeler isn’t completely satisfied. He is considering training to beat his own record. “I think I’ve got 150 kilograms [330 pounds] in me.” Woody Allen Plans To Make “One Or Two More”...