Hollywood Blacklist Launched 75 Years Ago At Waldorf Conference: Here’s How It Went Down Today marks the 75th anniversary of the Waldorf Declaration, which on November 25, 1947, officially launched the Hollywood Blacklist. On that day, the heads of the major studios, with a few notable exceptions, agreed after a contentious two-day conference at the Waldorf-Astoria in New York City to ban the Hollywood Ten and to not “knowingly” employ Communists.

And so began one of the darkest chapters in Hollywood’s history.

Just a few weeks earlier, the Hollywood Ten had denounced and refused to cooperate with the House Un-American Activities Committee and later were sent to federal prison for contempt of Congress.

“We will forthwith discharge or suspend without compensation those in our employ,” the Waldorf Declaration stated, “and we will not re-employ any of the 10 until such time as he is acquitted or has purged himself of contempt and declares under oath that he is not a Communist.

“On the broader issue of alleged subversive and disloyal elements in Hollywood, our members are likewise prepared to take positive action. We will not knowingly employ a Communist or a member of any party or group which advocates the overthrow of the government of the United States by force or by any illegal or unconstitutional methods.” 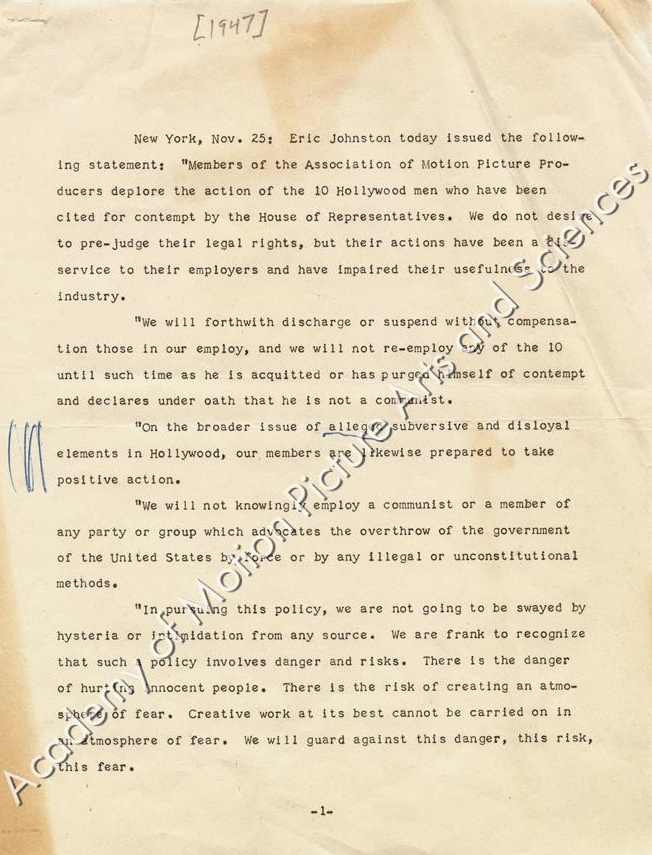 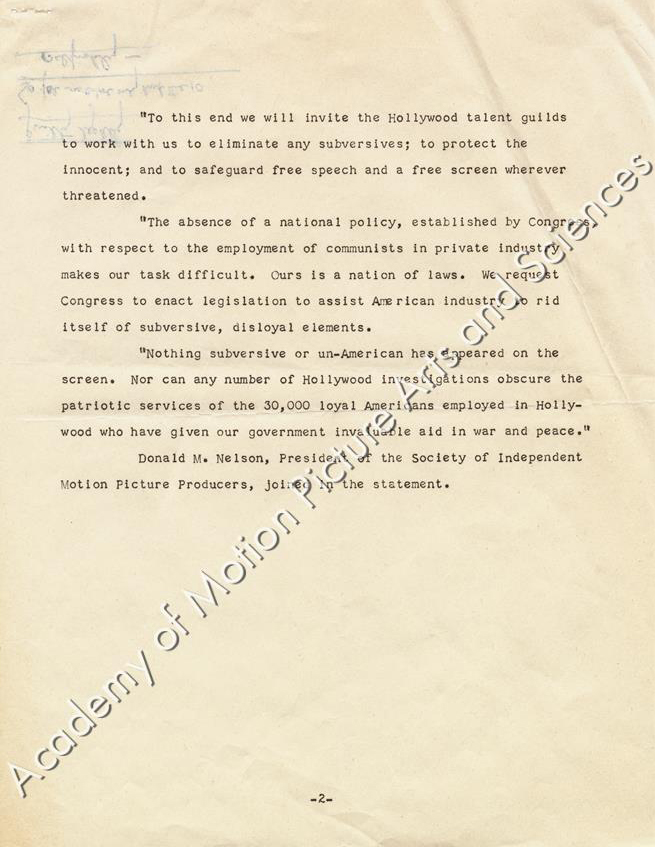 Fearing that inaction would lead to a loss of public confidence and more government intrusion – while at the same time inviting it – the studio bosses were eerily prescient about what dangers lie ahead but felt they could control the course of events that their declaration had set in motion.

They couldn’t have been more wrong.

“In pursuing this policy, we are not going to be swayed by hysteria or intimidation from any source,” their declaration stated. “We are frank to recognize that such a policy involves danger and risks. There is the danger of hurting innocent people. There is the risk of creating an atmosphere of fear. Creative work at its best cannot be carried on in an atmosphere of fear. We will guard against this danger, this risk, this fear. To this end we will invite the Hollywood talent guilds to work with us to eliminate any subversives: to protect the innocent; and to safeguard free speech and a free screen wherever threatened.”

The Screen Actors Guild, the Screen Directors Guild and the Screen Writers Guild all went along with it, allowing their members to be blacklisted while at the same time failing to protect the unfairly accused or safeguard free speech. Hundreds of voices would be silenced and careers ruined.

Insisting that Hollywood was loyal, the studio heads urged Congress to root out Communists in all walks of life. “The absence of a national policy, established by Congress, with respect to the employment of Communists in private industry makes our task difficult,” they wrote. “Ours is a nation of laws. We request Congress to enact legislation to assist American industry to rid itself of subversive, disloyal elements.

“Nothing subversive or un-American has appeared on the screen, nor can any number of Hollywood investigations obscure the patriotic services of the 30,000 loyal Americans employed in Hollywood who have given our government invaluable aid to war and peace.”

The meeting was heated, with Schary, Goldwyn, Wanger and Mannix dissenting. But at the end of the day, the conference released a declaration along the lines proposed by Johnston, who just four days earlier, in a speech to a group of motion picture pioneers, wrongly claimed that the Hollywood Ten – screenwriters Dalton Trumbo, Ring Lardner Jr., Alvah Bessie, Lester Cole, John Howard Lawson, Albert Maltz, Samuel Ornitz and Adrian Scott, and directors Herbert Biberman and Edward Dmytryk – had done “a tremendous disservice to the industry” and “hurt the cause of democracy immeasurably.”

Bryan Cranston scored an Oscar nom for playing the blacklisted title character in the 2015 biopic Trumbo.

In his 1979 autobiography Heyday, RKO’s Schary gave what’s believed to be the only written eyewitness account of the Waldorf Conference.

Johnston opened the meeting with a call to ban the Ten and all known Communists until and unless they cleared their names. “Johnston’s opening salvo was followed by patriotic statements from Messrs. Mayer, Freeman, Skouras, and a few others,” Schary wrote. “Sam Goldwyn was bold enough to suggest that there was an air of panic in the room. Goldwyn, ramrod straight … spoke sarcastically and irritated Johnston, who responded with an angry speech, concluding with the cliché question asking us whether we were mice or men. He insisted that if the motion picture business wanted to earn the respect of the American public, the 10 men who had appeared plus any known, or believed to be, Communists had to be discharged.”

“That was my cue to speak up. The men involved at the hearing were not yet proven guilty of anything — there was no law in the country denying the right of any citizen to be a Communist; there was no proof any of these men had advocated the overthrow of the government by force or violence; we had insisted there had been no Communist propagandizing in films, hence, the men in question could not be guilty of that arcane crime; we would dishonor and not honor our industry by an action that would inevitably lead to a blacklist.

“My remarks provoked another angry outburst from Johnston and one by Skouras. However, Walter Wanger demanded the floor and he barged into Johnston, supporting my list of reasons for not rushing into a maelstrom. Then Goldwyn chipped in again, this time with anger and a statement that he would not be allied to any such nonsense as that proposed by Johnston.

“The biggest surprise comment came from Eddie Mannix, the general manager of MGM Studios. Eddie was once a bouncer for the Schenck brothers’ enterprise at Palisades Park. He was a tough man, physically and emotionally, had a rugged temper, iron fists, and an enormous appetite for liquor and women.

“Eddie was one of those who believed it would have been sensible for the Allies to turn on Russia after Hitler was wiped out and finish them off while they were in a position to be had. Therefore, none of us expected Eddie to say that he opposed firing the 10 men. But Eddie argued that there was a state law in California that prohibited an employer from firing anyone because of his political ideas, and Eddie added that he would not break the law.

“It was now time for Jimmy Byrnes to speak up. He doubted that any government official ‘would argue with the decision of the industry to get rid of Reds.’ Not only that – the men could be relieved of their jobs because of the contractual ‘morals’ clause on the basis that their behavior had brought disrepute on the industry.

“That heated up the meeting, with Goldwyn, Wanger, and me providing some of the coal. Finally, Johnston, who had been slapping his hotel key on the table as he made his arguments, became furious and threw his key down as a gage of battle and threatened to quit unless the industry came to its senses.

“No vote was ever taken. It was Johnston’s threat plus Byrnes’s argument that had won the decision to discharge those cited. I said I would not be a party to the action – so did Goldwyn and Wanger, but we won no support.

“A committee was appointed to draft a statement. Mendel Silberberg, who was chairman, asked that I, as a spokesman for the opposition, be a member. It was an assignment I did not want, but Goldwyn whispered, ‘Do it – maybe they won’t go crazy.’”

The two-page, eight-paragraph statement, Schary wrote, “is inconsistent, probably because I helped make it so by protesting the first four paragraphs and aiding in writing the last four, in the hope that I could persuade the guilds to form a defense barrier to prevent wholesale firings and investigations. That foggy hope served to make me a target for the right and the left. I should never have listened to Goldwyn.”

“He tried to stop them, but they wouldn’t listen,” Schary’s daughter, author Jill Schary Robinson, told Deadline. “Everyone was so scared. It was a really a tough time. My dad was horrified. He had warned some of the younger writers about what was coming. It was the kind of feeling we have now about Trump, but even more dangerous.”

Twenty-five years ago, at a star-studded gathering at the Academy of Motion Picture Arts and Sciences – held, fittingly enough, at the Samuel Goldwyn Theater – the industry commemorated the 50th anniversary of the blacklist and issued apologies.

“We look back in sadness and in shame that our Guild at that time supported, in effect, the Waldorf Declaration, which committed the industry to the blacklist,” then-WGA West president Daniel Petrie told the audience, which included many of the remaining survivors of the blacklist. “At one time, the board authorized the guild president to turn over all union records to HUAC. Now I am humbled by the privilege of offering, directly to those seated in the theater who suffered as a result of those actions taken so long ago, and to your families, a pledge on behalf of the Writers Guild of America that we will be out in front of all efforts today, and in the future, to prevent any governmental move to restrict expression and conform thought. It must not happen again. It will not happen again.”

SAG president Richard Masur told the audience: “Tonight, the Screen Actors Guild would like to express how deeply we regret that when courage and conviction were needed to oppose the Blacklist, the poison of fear so paralyzed our organization. The Screen Actors Guild’s participation in tonight’s event must stand as our testament to all those who suffered that, in the future, we will strongly support our members and work with them to assure their rights as defined and guaranteed by the Bill of Rights.”

As part of the ceremonies, DGA President Jack Shea announced that the guild had restored Herbert Biberman’s membership and officially returned his name to the list of the guild’s founders, from which he he’d been expunged during the Blacklist.

That night, a statement from Nick Counter, president of the Alliance of Motion Picture & Television Producers also was read, in which he wrote: “The member companies of the AMPTP join with the guilds in commemorating the 50th Anniversary of the Blacklist Era and hope that these efforts will make amends for those who were scarred by the blacklist hysteria. We likewise believe there is no place in a free society for the blacklisting and censorship which took place 50 years ago.”

Today, all these years later, 102-year-old screenwriter Norma Barzman is believed to be the last survivor of the Hollywood Blacklist.

“It was terrible. It was so frightful,” she told Deadline. “When all this started, my husband and I and my mother and babies all left for Europe. We did not stay here for that. Our friends went to jail, and we packed up and never went back to our home.”

While in Europe, she wrote the screenplay for Luxury Girls, with screenwriter Ennio Flaiano serving as her front. Her husband, screenwriter Ben Barzman, wrote El Cid and several other films while on the Blacklist.

The author of The Red and the Blacklist: The Intimate Memoir of a Hollywood Expatriate, Barzman tells Deadline that she’s currently writing the film adaptation of her 2006 book The End of Romance: A Memoir of Love, Sex, and the Mystery of the Violin.