God Save The Queen. And Helen Mirren as Queen Elizabeth I.

Queen Elizabeth II was amused today by yet another celebration of her 70th year on the throne. This time, it was a Windsor castle event called “A Gallop Through History,” which the horse-loving Queen delighted in watching. 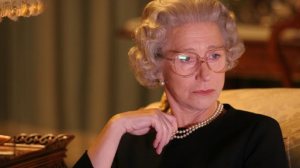 Highlighting the show was a stage performance featuring Mirren as Elizabeth I whom she previously portrayed in the HBO miniseries Elizabeth I. The Oscar winner also has played Elizabeth II twice in the films The Audience and The Queen, making her the perfect choice for the task. (Watch a clip from her performance below.)

Watch some event clips below.

#HelenMirren as Elizabeth I, such an incredible speech. Did anyone else get goosebumps? #PlatinumJubilee #BritBox pic.twitter.com/JLTuPmJWC9

Lady Danbury, is that you? @andoh_adjoa and @omid9 explore the gunpowder plot #PlatinumJubilee #BritBox pic.twitter.com/qNqIx2Ets5

.@lewis_damian provides an introduction for the historical and equine journey we're about to embark upon. #PlatinumJubilee #BritBox pic.twitter.com/lOKS8MMwp9