If the name of the game is disruption, advantage Thursday to Thibodeaux, who created nine pressures, including five quarterback hits, on 21 pass-rushing snaps in a 28-20 loss to the Cowboys. Thibodeaux’s second career game sharing the field with Parsons was the second-most effective game (42.9 percent pressure rate) for a player with at least 20 rushes across the NFL this season, according to Pro Football Focus.

And yet he didn’t sack Dak Prescott. Neither did any of Thibodeaux’s teammates. In fact, the Giants’ defense failed to record a sack for the second straight game, which had not happened since November 2017. It was the fourth time (twice against the Cowboys) in 11 games with a zero in the sack column.

“It definitely eats you alive when you miss those plays that they give to you,” Thibodeaux said. “You have to keep being a student of the game. I have to keep getting better so when those opportunities come, I make them.” 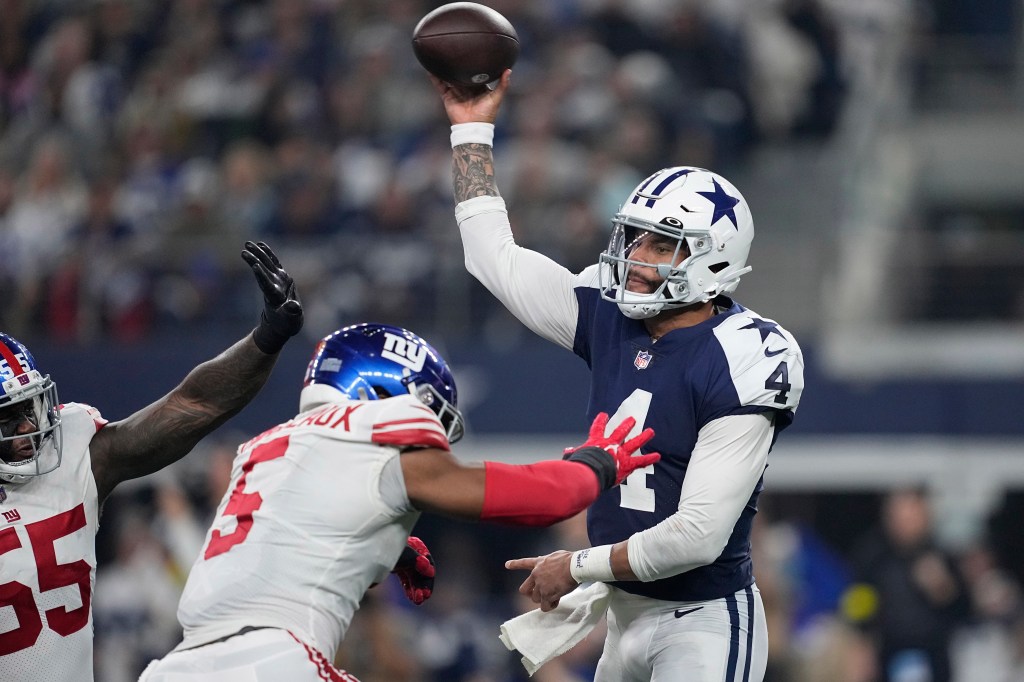 Kayvon Thibodeaux had a season-high five quarterback hits in the Giants’ loss to the Cowboys on Thanksgiving. AP

If the name of the game is game-changing plays, advantage Parsons, who turned his only two quarterback hits into sacks while playing 37 of his 43 snaps across from Pro Bowl-caliber left tackle Andrew Thomas. Parsons’ season total (12) trails only the Patriots’ Matthew Judon.

“On a team where the star [logo] is in the middle of the field, that’s the game’s biggest star,” NFL Network film analyst Brian Balindger said in his #BaldyBreakdowns segment on Twitter.

Parsons’ first sack was for a 1-yard loss on a series that ended with Daniel Jones throwing an incompletion to a stumbling Saquon Barkley on fourth-and-1. The second was a 10-yard loss on a second-and-20 that, combined with an offensive penalty, stalled out a drive that saw the Giants gain three first downs.

“We got to the third-and-25,” head coach Brian Daboll said, “and it put us behind the sticks a little bit.”

The Giants are thrilled with Thibodeaux’s rookie development despite just one sack, especially his buy-in to less-glamorous edge responsibilities. Their internal belief is impact made on more plays is better than a high-sack total for a one-dimensional rusher.

“Our system is unique in a lot of ways, so it’s not that easy to translate from college to the NFL,” outside linebackers coach Drew Wilkins said recently. “You can see this guy thinks at a high level and he loves football, so he attacks football at a high level. That’s benefited all of us.”

But the defense is missing an element of finish in the pass rush that Parsons — who the Giants passed on drafting in 2021 — offers. The Giants blitz second-most frequently (37.8 percent of snaps) but rank No. 23 in sacks (20).

“We definitely have to tighten up and fix things,” defensive tackle Leonard Williams said. “I don’t want to make excuses, but injuries have been a part of our season and overall everything is still in front of us.”

Maybe the pending return of Azeez Ojulari — who had eight sacks last season as a rookie and has one in two games during his injury-plagued second season — will be the missing piece.

“The one-on-one rush ability is the area where he is at high level,” Wilkins said, “and everything else is coming with that.”

Williams, Dexter Lawrence and Thibodeaux all have had one game with five quarterback hits during the Giants’ recent 1-3 stretch. Those 15 combined contacts resulted in just two total sacks, however. The Giants’ three best pass-rushers all are playing 80 percent or more of the snaps with regularity, so it could be that late-season fatigue is causing them to arrive a step too late to make a difference. 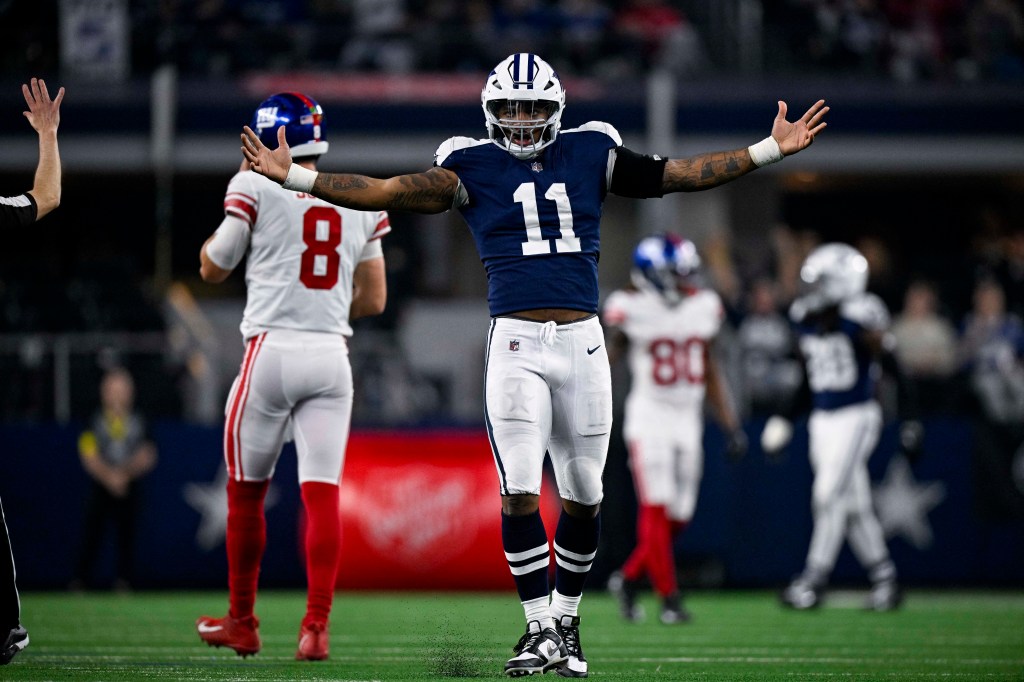 Micah Parsons celebrates after recording a sack during the Cowboys’ win over the Giants on Thanksgiving. USA TODAY Sports

“I do think we’re doing a good job of getting [the quarterback] off the spot, making him throw it faster than he wants to throw it,” Daboll said. “But when you can get the quarterback down, you can move offenses behind the sticks and put them in more passing situations on the next down. That’s always helpful.”

Thibodeaux had Prescott dead to rights at one point but missed. Ezekiel Elliott ran for a first down on the next play. It was symbolic of the missed opportunities in all three phases for the Giants in their 10th straight loss against Prescott.

“When you fight with your back against the wall,” Thibodeaux said, “you have to make plays when time is due.”