Wink Martindale learned the hard way to get his dinner delivered, his cornerbacks prepared and to avoid mixing up the two.

The Giants are in a situation this week that must feel eerily familiar to Martindale, who oversaw the collapse of the Ravens’ defense late last season when injuries to starting cornerbacks forced backups to play. He joked in hindsight a few months into his role as Giants defensive coordinator that the slide that preceded his exit after nine mostly successful seasons in Baltimore taught him “don’t go to DoorDash to find a backup corner.”

As it turns out, Nick McCloud came to the Giants from the waiver wire and the trio of Darnay Holmes, Rodarius Williams and Cor’Dale Flott arrived via the last three drafts. With Adoree’ Jackson sidelined and Fabian Moreau not practicing, that quartet likely will be the cornerbacks facing Cowboys quarterback Dak Prescott, who has completed 72.3 percent of his passes with eight touchdowns and three interceptions and 107.7 rating in four games since his return from injury.

“Either you are ready for the challenge or you are not,” Holmes said. “The way we are preparing ourselves, we are definitely ready to showcase our talents against a great team. I put a lot on myself, so it’s just another game for me.” 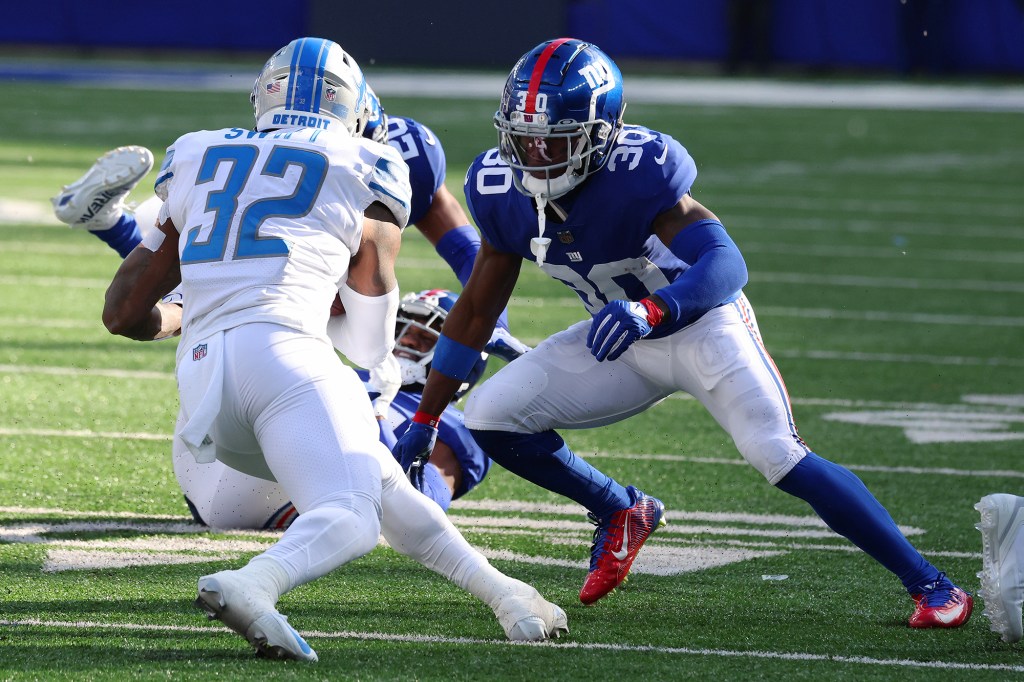 It would be difficult for McCloud, Williams or Flott to claim the same. They have played fewer combined defensive snaps (233) than Holmes (367) this season. The rookie Flott missed five games due to a calf injury, and Williams made his season debut returning from a torn ACL last week.

When Jackson injured his knee, Flott was first up. He rotated by series with Williams. McCloud later replaced Moreau (oblique) on the other side of the field.

“Definitely critical blows to the morale of the team: Two good players and two good leaders in the room,” McCloud said. “But it’s a next-man-up mentality.”

McCloud knows that Prescott probably is licking his lips because he saw Aaron Rodgers do it. On the first play after McCloud replaced an injured Jackson against the Packers on Oct. 9, Rodgers completed a 17-yard pass targeting the second-stringer. Two snaps later, McCloud was called for a penalty. But McCloud got the last laugh with a diving pass breakup, and when a late pass in his direction was batted down at the line of scrimmage to essentially seal a Giants’ win.

“Aaron Rodgers came at me, but I settled down and started playing better. I expect some of the same things,” McCloud said. “Going out there and making plays to help the team win before gives me confidence to try to do it again.” 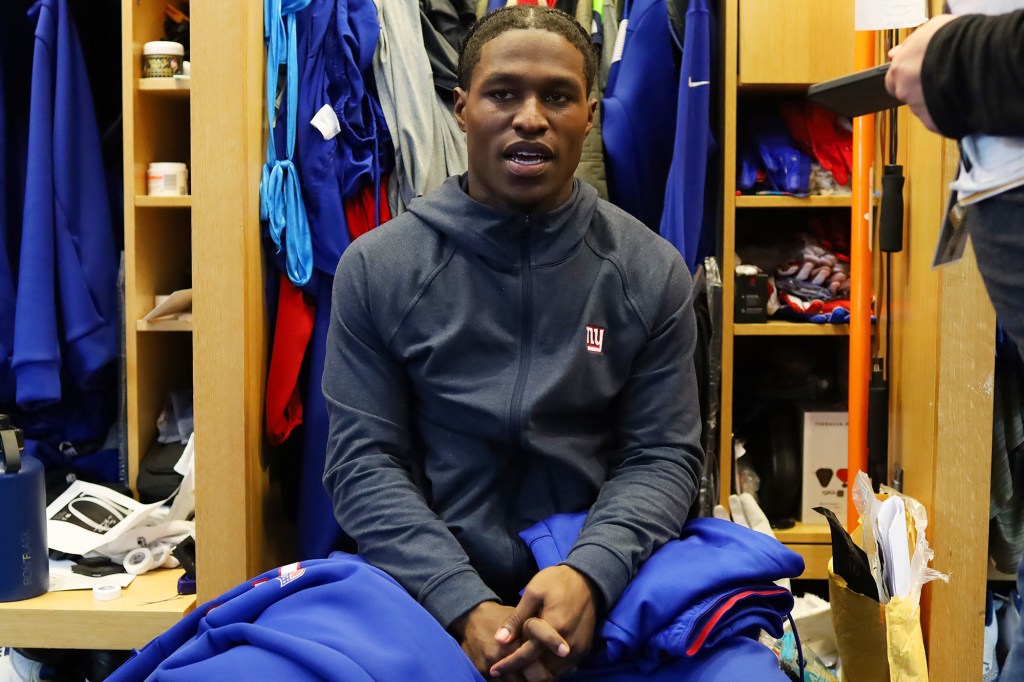 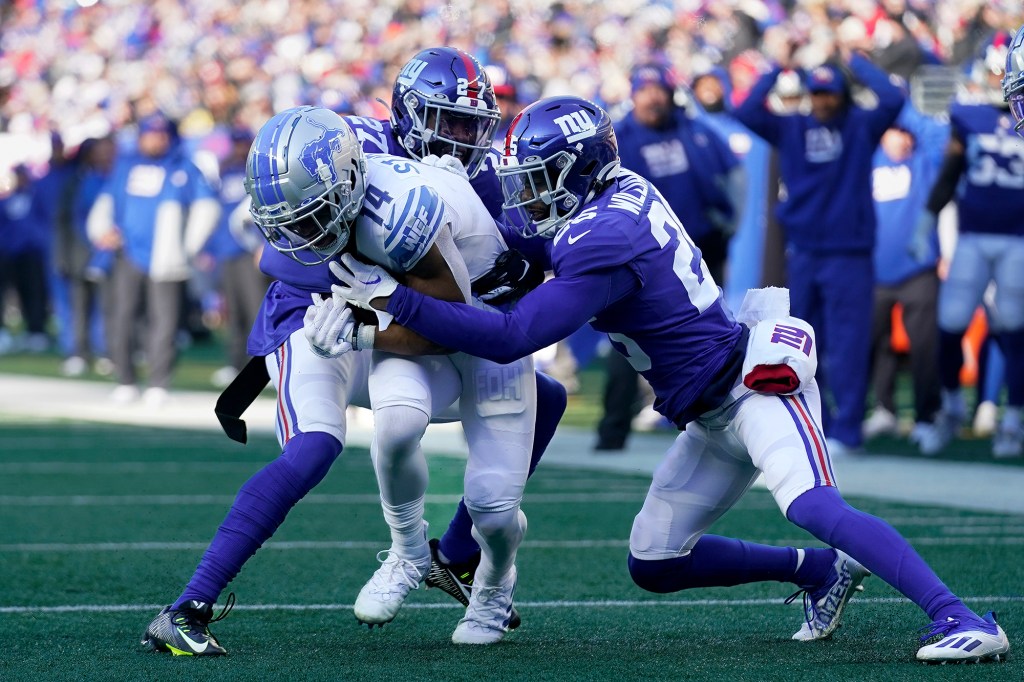 The outside cornerback spots are “interchangeable,” Flott said, so the game plan will not necessarily dictate that the same player lines every snap up on the left or right side, on the field or boundary side, or against the same Cowboys receiver.

“They have a good group,” Flott said. “You have to watch them all closely, respect them all the same. You can’t put one on a pedestal and not worry about the others.”

Michael Gallup is a former 1,100-yard receiver and veteran Noah Brown is having a career year, but CeeDee Lamb is one of the NFL’s elite. He plays 46.4 percent of his snaps in the slot — where Holmes resides — unless the Cowboys move him to the perimeter to capitalize on inexperience.

“CeeDee is a guy who is constantly elevating every year,” Holmes said. “Great catch radius, sudden [quickness] and he loves ball. As a competitor, you wouldn’t want to go against any other guy but him.”

The Giants play by far the most man-to-man coverage (50 percent of snaps) of any NFL team. But sticking with his blitz-heavy packages that leave cornerbacks on an island is what got Martindale in trouble last season. He vowed to have “a flexible enough scheme to make some changes if you have a guy who hasn’t made much playing time.”

“We all are mellow people, and we have the same focused mindset regardless of if we are playing or not,” Flott said. “We trust Wink. We just want him to be him. As he always tells us, he’ll keep us composed.”

With less practice time on a short week, the young cornerbacks watched film together early in the morning and stayed late after practice.

“Your wins can definitely enable you to play freer, and your lessons allow you to play smarter,” Holmes said. “I feel like we are going to keep the ball rolling and play whatever calls are being called by our ‘OG’ Wink. We know the way we should run the system, no matter who is out there.”