MINNEAPOLIS — Justin Jefferson told Garrett Wilson that he was fun to watch, and Wilson returned the compliment.

“That was cool,” the Jets receiver said. “Something I’ll remember for sure.”

The rookie will have plenty more to remember about this 27-22 loss to the Vikings. Wilson, the 10th-overall pick out of Ohio State, put on a show for Jefferson, the dominant third-year star out of LSU who scored Sunday’s winning points on a 10-yard scoring pass in the fourth quarter, the 23rd touchdown of his career.

Wilson finished with eight catches for 162 yards, the most yardage gained by any Jets receiver since Eric Decker closed out the 2014 season with 221. And his afternoon could have been more special had he not stepped out of bounds at the Minnesota 11 early in the fourth quarter on a 60-yard catch that otherwise would’ve been a touchdown.

“He’s impressive,” said Jets coach Robert Saleh. “I don’t think it’s a secret with him. He’s dynamic, he’s special. Wish he could’ve kept his feet in bounds on that one explosive [play], but man, that was amazing that it even got to that point the way he broke tackles.” 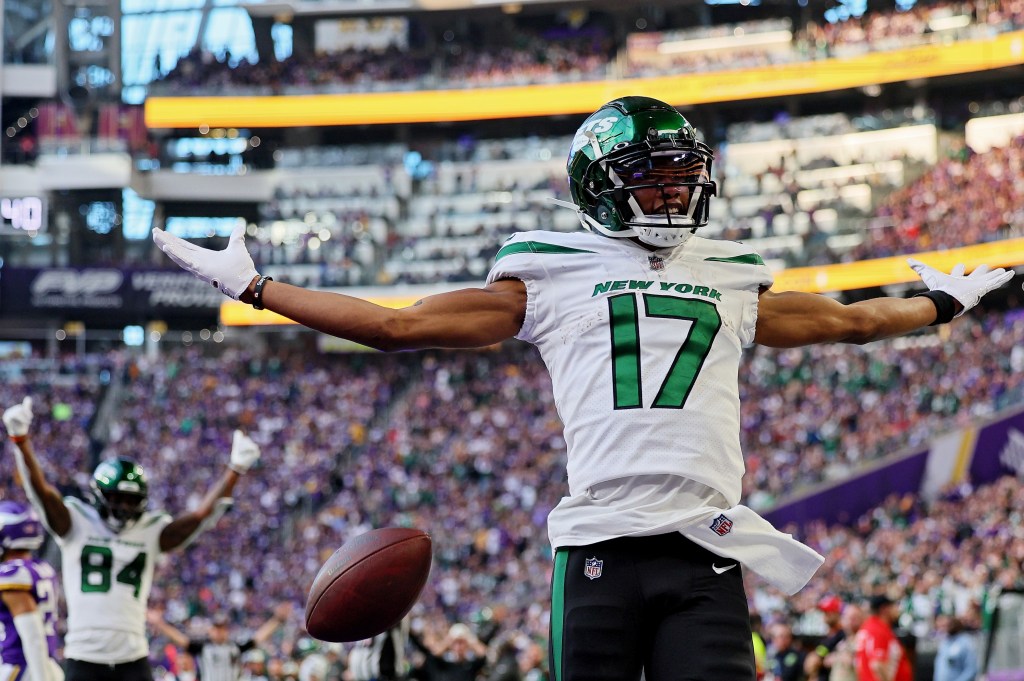 Garrett Wilson celebrates in the end zone after stepping out of bounds on a long pass in the fourth quarter.Getty Images

As the Jets struggled to maintain anything offensively in the first half, falling behind by 17 points, they clearly didn’t do enough to get Garrett the ball. That didn’t temper the receiver’s desire to impact the game in a big way.

“I can’t lose myself because I missed out on a few drives, or didn’t get the ball,” Wilson said. “I can’t let that affect the rest of the game. My teammates rely on me. My family relies on me. I want to see myself be great. For me to go out there and let a few drives where I don’t get the ball mess with my game would be childish of me.”

Said Mike White: “Garrett’s a fighter. He might not have got the ball early [but] never complained. He kept running routes. Even the long one, initially the first window wasn’t there and he just kept running and trusted me. And I trusted him and threw it in that second window and he made an unbelievable play that Garrett seems to do a couple of times a game now.”

Wilson and White teamed up for 95 yards and two touchdowns in last week’s shredding of the Bears. The receiver praised the quarterback’s poise in the final minutes and said, “I know that I’d go to war for that boy. He’s got something special about him.”

The same can be said of Wilson, who said he had “no clue” that he’d stepped out of bounds on that would-be touchdown. “Today was the definition of a game of inches,” he said, “over and over and over.”