There is nothing wrong with “fine.” It is leaps and bounds beyond “bad,” a step or two better than “blah,” though not quite worthy of a raised eyebrow and yards away from an audible “wow.”

Think: Burger and fries for dinner is “fine.” A forecast of mostly cloudy and 70 degrees is “fine.” A running back who tops 100 yards in a game, that’s “fine.” One who scores a touchdown? That’s “fine,” too.

Do them both, then you start getting into eyebrow-raising territory. And the best avenue to achieve something beyond the bounds of fine is through volume. After all, the more chances you get for success, the better your chances to achieve success. This is where data and common sense intersect.

At this intersection, we see a new vehicle that might finally be getting a fantasy green light. Fantasy managers have the tires spinning on Broncos running back Latavius Murray, ready to floor it with him in their lineups the rest of the way in the drag race to the finish.

There is reason to put the pedal to the metal on Murray. Denver did release Melvin Gordon  this week. That clears the decks for Murray, presumably, to take the lead role in the Broncos’ backfield the rest of the way. 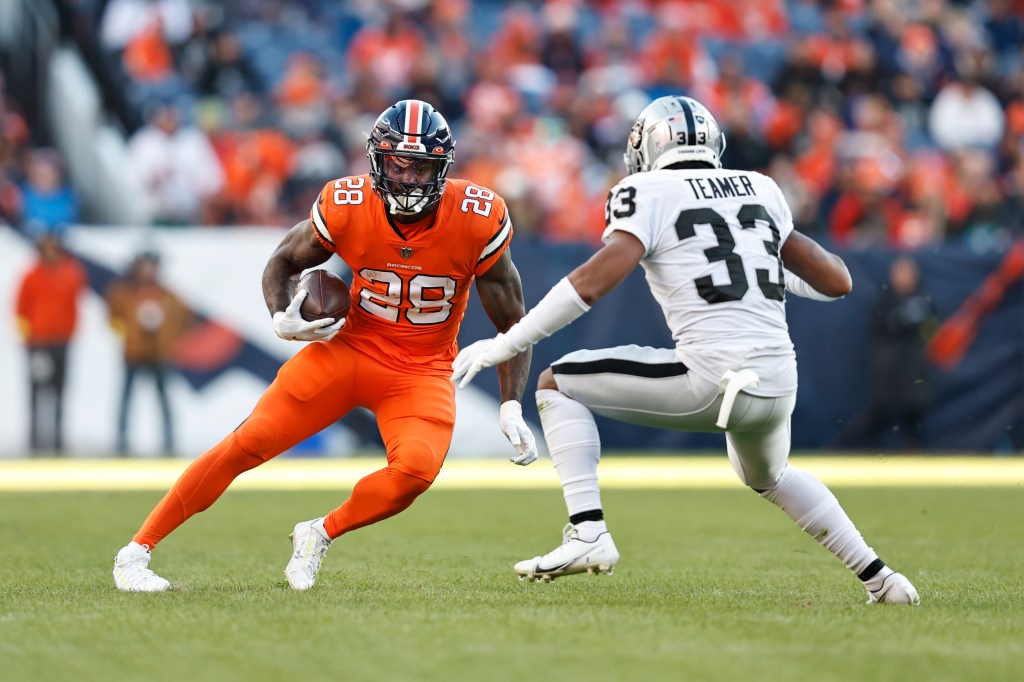 With no other competitor in the picture, Latavius Murray can take off as the Broncos leading running back.Photo by Michael Owens/Getty Images

But before we hit the gas, let’s pump the brakes for a moment. The Broncos rank 26th in the league in rushing yards this season, 29th in rushing TDs and 27th in yards per carry.

There is no reason to believe Murray will deliver a boost in efficiency, since he has been a part of the committee posting the paltry numbers. But, and here is the thing fantasy managers love, those are combined numbers Now, if all that production goes primarily to one RB, then that player becomes a worthy fantasy asset despite the gross lack of efficiency, based on sheer volume.

For example, if Murray alone were to have posted the same numbers alone as the Denver RB committee has throughout this season, he would rank as RB17 — between Travis Etienne Jr. and Dameon Pierce. And for most fantasy managers, that would be “fine.”

Couple of variables to consider though: 1. That rough projection does not include any receiving production. So Murray, who is dealing with a wrist issue that is not considered serious, could get a small boost thanks to a limited role in the passing game. But before you rev up Murray too much, bear in mind … 2. No RB gets all the backfield production for any team. There is always some degree of split. And considering how much determination the Broncos have shown to a shared backfield, we expect to see more Marlon Mack than anyone cares to see over the next few weeks — at least until/if Chase Edmonds or Mike Boone returns.

Thus, we don’t think Murray is going to be a season-saver. But we certainly like him against a bad Panthers run defense this week, and for the rest of the way, he’ll be just fine.

Worried about Justin Fields’ shoulder? Lack confidence in Tom Brady, Aaron Rodgers? If you have stashed Smith, this is a good week to use him. Every QB has registered at least one TD vs. Vegas except for Russell Wilson.

He was stealing more carries even before Leonard Fournette’s hip issue. The Browns have yielded two running back TDs in five of their past seven games.

Gonna roll the dice Zach Wilson was Garrett’s problem. He matches up well individually against the Bears’ secondary, according to Pro Football Focus.

QB Matthew Stafford is out. Less experienced QBs often lean on tight ends, whether Stafford’s replacement is John Wolford or Bryce Perkins   (Higbee went 8-for-73 with Wolford in Week 10). If Higbee’s knee issue gets in the way, Brycen Hopkins becomes a DFS dart throw.

Has been dealing with an illness this week, leading up to stiff matchup vs. the Niners. Mark Ingram likely to return, so Kamara workload could be limited even if he plays.

With five TDs in the past two games, he is going to get defensive attention. The Eagles’ secondary has allowed one TD to a wide receiver in the past four games.

Not the week to give D.J. another chance. The Colts are the league’s toughest vs. fantasy WRs — allowing just four TDs to the position since Week 3 and 7.1 PPR points fewer per week than the league average. 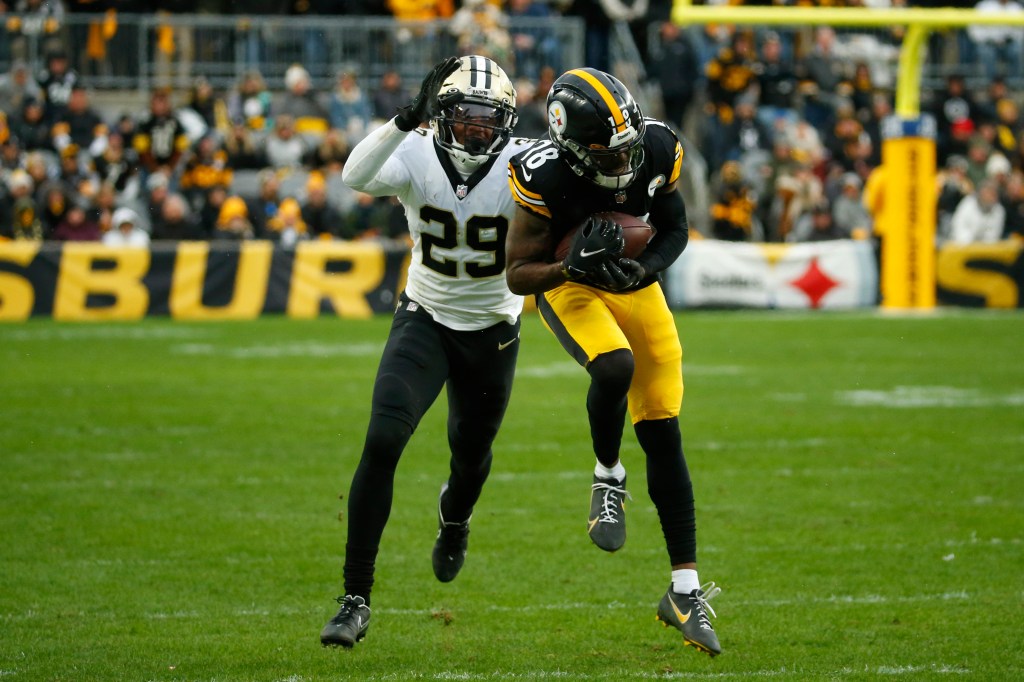 Diontae Johnson may have a rough fantasy week against the Colts.Photo by Justin K. Aller/Getty Images

You can’t sit him in seasonal leagues, so this is exclusively for DFS purposes: The Saints have yielded exactly one TD to a tight end all season. Even at relatively bargain DFS prices, not worth it. 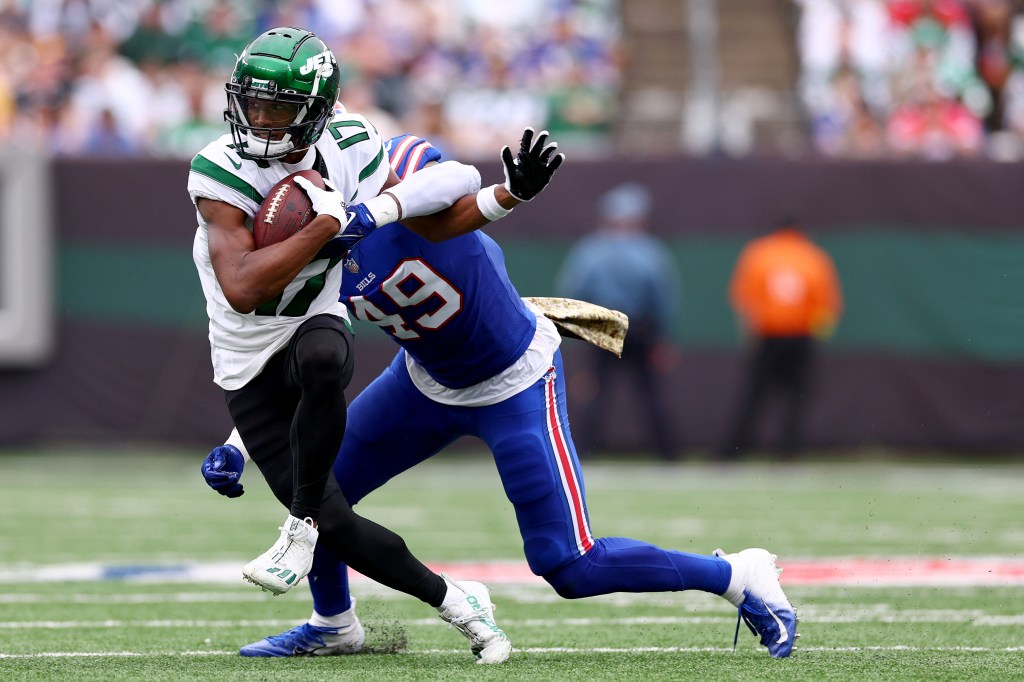 Garrett Wilson has been an engine for the Jets’ offense this season.Photo by Elsa/Getty Images