Deadline has confirmed local reports out of Italy that Legendary Entertainment’s Dune: Part Two is pre-shooting in Altivole, Italy in the Veneto region as early as tomorrow for two days. Full-on production with a bulk of the cast returning is scheduled for July 21 in Budapest, Hungary, which is where the 2021 title also filmed. 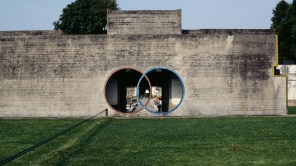 The shoot in Italy is reportedly taking place at the Carlo Scarpa designed Brion Tomb, a modernist looking area which looks ripe for the Dune universe. Scarpa designed the concrete structured area between 1968-78 comprised of a small chapel, a reflecting pool, an arcosolium, and gardens with Byzantine and Japanese accents.

Dune: Part Two plopped itself on the same release date as Lionsgate’s prequel The Hunger Games: The Ballad of Songbirds and Snakes. We’ll see if both tentpoles live on the same weekend farther down the road after marketing materials roll out. Neither studio is flinching yet. While Dune appeals to older guys, Hunger Games is aimed at young women.  Hunger Games begins filming in two weeks. ‘Days Of Our Lives’ Star Kristian Alfonso Is...