Daniel Vogelbach snapped out of a 5-for-42 funk. His replacement, Mark Vientos, snapped an 0-for-10 skid to begin his career and found his first hit. Francisco Lindor snapped back into the star he has played like for much of this season.

Facing Carlos Carrasco and a Mets bullpen that combined for 16 strikeouts, Pirates batters may have wanted to snap their bats over their knees.

And the Mets, in snapping a three-game losing streak, may have snapped out of whatever they have been trapped in for the past two weeks.

The Mets used a barrage of early hits to break through for a 7-1 victory over the Pirates in front of 25,683 at Citi Field on Thursday night, responding after getting swept at home by the Cubs.

The fact the Mets performed so well while all wearing No. 21 on Roberto Clemente Day was especially poignant and made for a happy locker room.

“It’s special. It’s great,” said Lindor, like Clemente a proud Puerto Rico native, after launching a two-run home run in the third inning, which set the record for most homers by a Mets shortstop (24) in a season. “A day like today where we’re remembering him and honoring him, that I was able to do one of the many things he did — and come up with the ‘W.’ I’m sure he’s happy.” 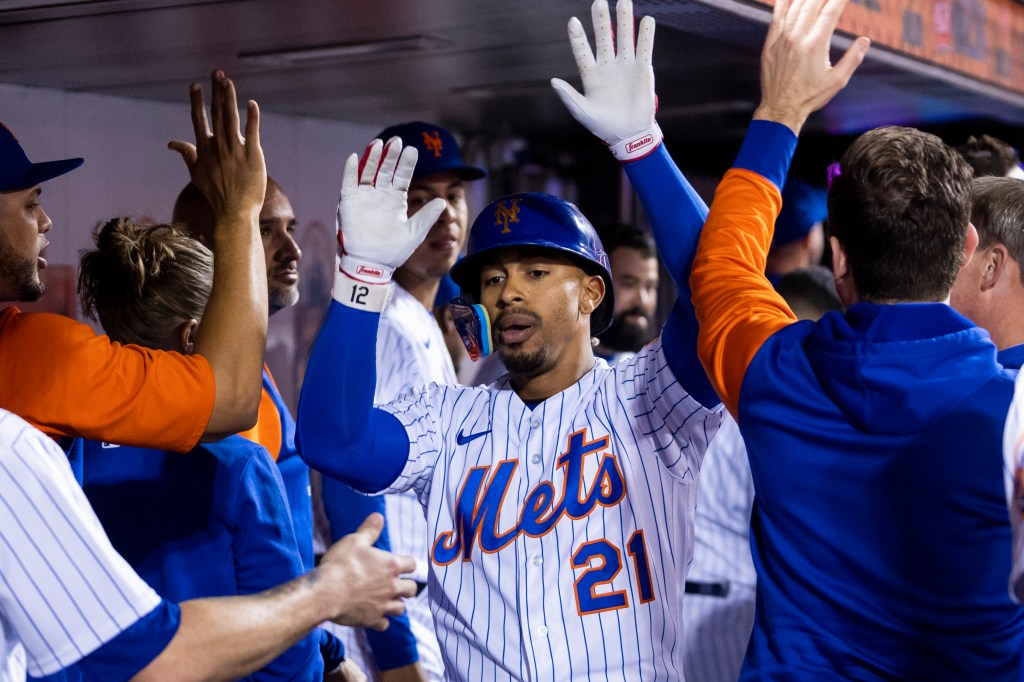 Francisco Lindor celebrates in the dugout after his two-run homer. Corey Sipkin for the NY POST

One game does not signal the Mets have left cold bats firmly in the past. During this 6-7 stretch against teams well under .500, the Mets have averaged 8.2 runs in their victories and 1.9 runs in their losses, either exploding or imploding nearly every game.

Thoroughly beating the Pirates (55-89) might not mean much, but it did mean the Mets (90-55) moved a full game ahead of the idle Braves.

The manner in which the Mets disposed of Pittsburgh, though, was encouraging: excellent pitching combined with clutch hits — the recipe that had the Mets cooking until this month’s struggles.

Vogelbach, who already has transitioned from folk hero to a target of boos from the fans in Queens, was in the middle of a few rallies that helped the Mets take control. The struggling designated hitter cracked a two-run, two-out double to deep right in the first inning, driving in Jeff McNeil and Pete Alonso.

In the third, both base runners got aboard again for Vogelbach, whose stroked single knocked in McNeil. 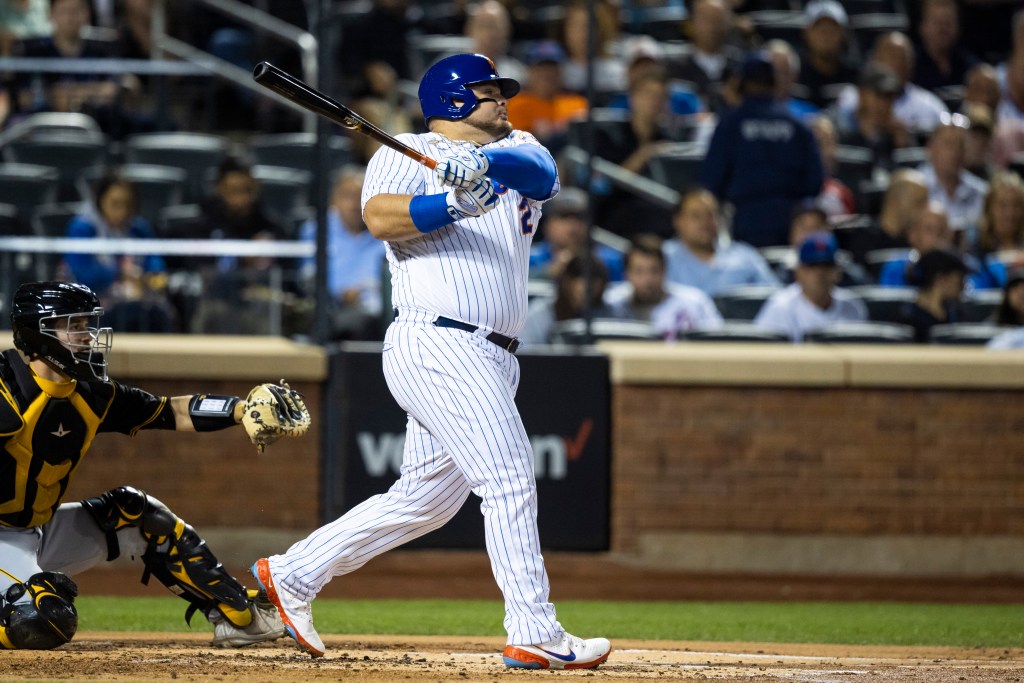 Daniel Vogelbach hits a two-RBI double in the first inning. Corey Sipkin for the NY POST

“We all know what Vogey’s capable of,” manager Buck Showalter said after Vogelbach’s first extra-base hit in 16 games. “When he gets into what he’s capable of, it creates a lot of walks and he hits balls hard, a lot of times where people can’t catch them.”

The Mets added another in the fourth, when Vientos pinch hit for the lefty-hitting Vogelbach against Pirates lefty Eric Stout and grounded an RBI single through the right side for his first career hit and RBI.

Staked to a five-run edge, Carrasco and the Mets’ bullpen didn’t need the room for error. 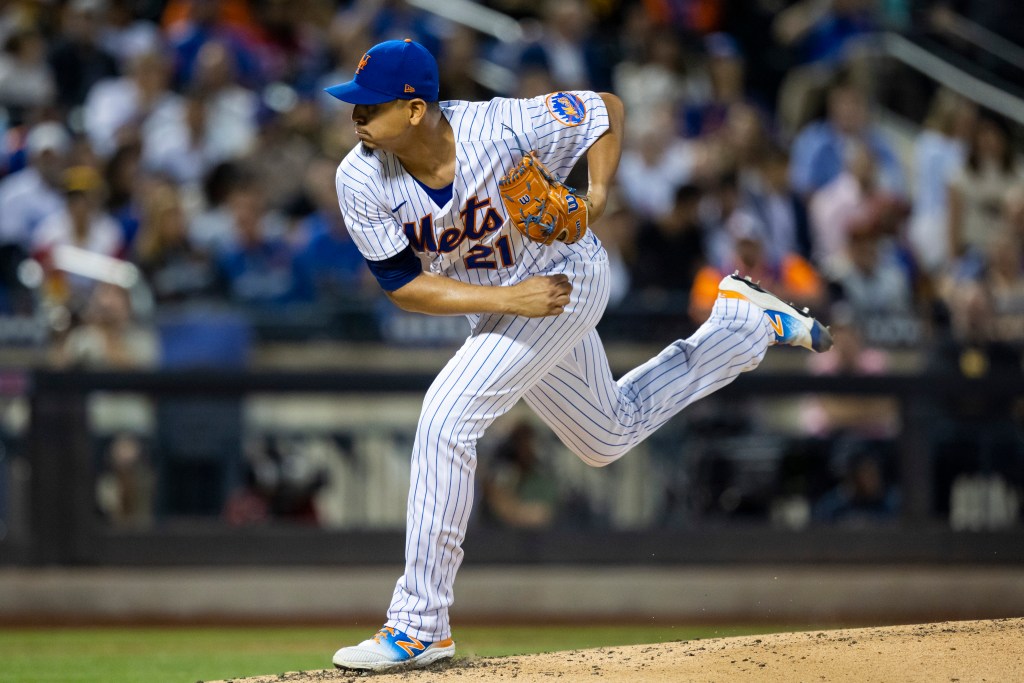 Carlos Carrasco pitches on Thursday during the Mets’ win over the Pirates. Corey Sipkin for the NY POST

Carrasco struck out a season-best 11 while allowing just one run on four hits and two walks in six innings. Eight of the strikeouts came on his changeup, which the Pirates could not touch all night: They swung at 24 and missed 14 times.

Carrasco, who won the Roberto Clemente Award in 2019, said the game — which Clemente’s family and many past winners attended — was especially important for him.

“It was unbelievable before the game,” said Carrasco of a ceremony in which Dave Winfield, Carlos Beltran, Carlos Delgado and many other recipients of the award were honored. “It was really nice.” 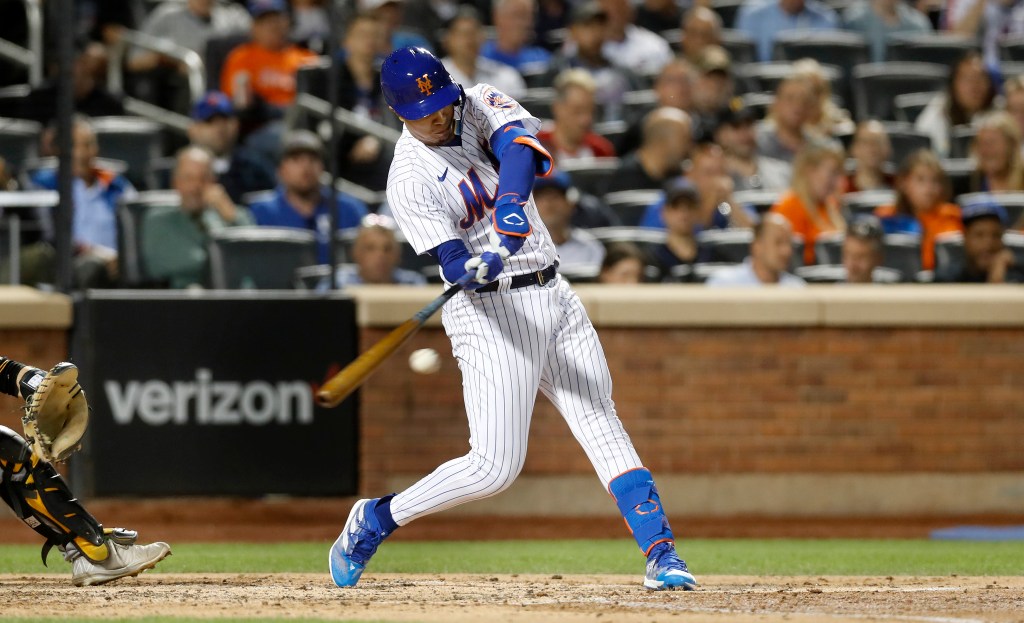 The only run he surrendered came in the second inning, when he walked Cal Mitchell before Michael Chavis drilled an RBI double into the right-center-field gap.

But that’s all the Pirates got against Carrasco, who held Pittsburgh batters to 0-for-5 with runners in scoring position.

Seth Lugo struck out the side in the seventh. Joely Rodriguez worked solid eighth and ninth innings and so fooled Oneil Cruz on a whiff that he helicoptered his bat for a second time in the game. Carrasco made the rookie stud send the bat into the stands, while Cruz’s bat hit the netting down the first-base line against Rodriguez.

It was the kind of night and the kind of game that makes the struggles worth fending off.

“It was a special day,” said Lindor, who has a career-high 94 RBIs. “It was a lot more buzz around, a lot more happy energy in the building. But it’s still a grind.” Kanye West Wants To Pull The Plug On...