Daniel Jones has to be looking around and wondering how, exactly, he is supposed to win this road game against the Dallas Cowboys. Jones has never played on Thanksgiving, not even in high school, and his first crack at it comes at a time when his team is physically falling apart.

The Giants don’t have healthy receivers, or healthy defenders to cover the Dallas receivers, and their offensive line has been reduced to a case study in neck-injury management. The Cowboys have allowed the league’s fewest points (16.7 per game) and the fewest passing yards (174.5 per) while racking up the most sacks (42), and they are coming off the kind of performance at Minnesota that suggests they might actually return to the Super Bowl for the first time in 27 years.

This sure looks like a losing proposition for the Giants, who were just physically tossed around at home by the Lions. If this 7-3 season ends up in flames, people will point to that Detroit game and say the Giants were exposed for what they always were — a thin, deficient team coached up by the Rookie of the Year, Brian Daboll, who finally made his first big rookie mistake by asking the invaluable Adoree’ Jackson to return punts.

But none of that means the Giants have to succumb to Micah Parsons’ considerable will, lose for the second time in five days and turn what had been a vibrant community-center type of locker room into the quiet and sober place it was Tuesday. “Throughout the year we’ve shown ourselves as a resilient group, a tough group, mentally and physically,” Jones said in that room. “And this is an opportunity to show that.”

Indeed. As they have proven many times under Jerry Jones, the Cowboys are capable of wasting a golden opportunity with the best of ’em. Now Daniel Jones has to somehow score enough points to make that happen. 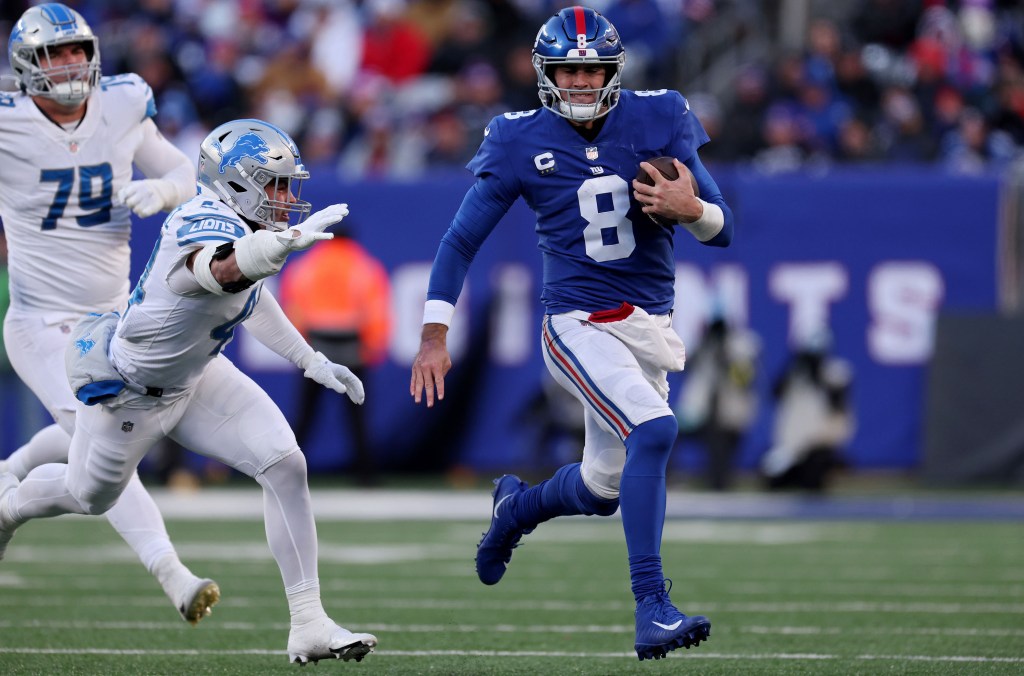 He won’t have tight end Daniel Bellinger, again, and he won’t have receiver Wan’Dale Robinson for the rest of the year after the rookie broke through against Detroit for 100 yards before tearing up his knee. The sorry state of Jones’ receiving options can be summed up this way: Slayton and Golladay and pray for a holiday.

Except that Kenny Golladay has a grand total of four receptions this season, and this holiday matchup isn’t one the Giants would’ve prayed for even if they’d beaten Detroit and remained ahead of Dallas in the playoff race. On short rest, with absolutely no margin for error, Jones has to figure out how to take his best year of football to new heights.

His legs would be the best place for Vanilla Vick to start.

Jones has to partner with his dear friend Saquon Barkley and try to run semi-wild in these final seven games. As great as Barkley has been for most of the pre-Detroit season, defensive coordinators in today’s NFL don’t lose sleep at night over running backs. But they do lose sleep over the thought of athletic quarterbacks demoralizing their units by fleeing the pocket and wrecking otherwise perfect defensive stands.

And Daniel Jones is the most athletic full-time quarterback the Giants have ever dressed. (For the record, I’ve got Fran Tarkenton at No. 2 and Jeff Hostetler at No. 3.)

The 6-foot-5, 230-pound Jones seems even faster on game day than his unofficial pro-day time of 4.67 in the 40-yard dash suggested. When he was clocked at 21.23 miles per hour during his 80-yard run against the Eagles in 2020, Next Gen Stats reported it was the fastest speed recorded by a quarterback in three years, Lamar Jackson included. Jones is fifth among NFL quarterbacks this year with a career-high 437 rushing yards, and only Jalen Hurts and Justin Fields have more rushing touchdowns than his four.

Of course, more scrambles and designed runs increase the chance for injury, meaning Jones has to be ultra-selective when choosing to lower his shoulder. But outside of an Odell Beckham Jr. signing, it’s hard to see where else the Giants’ offense can go to improve as this diminished team seeks the three victories it likely needs to reach the postseason. 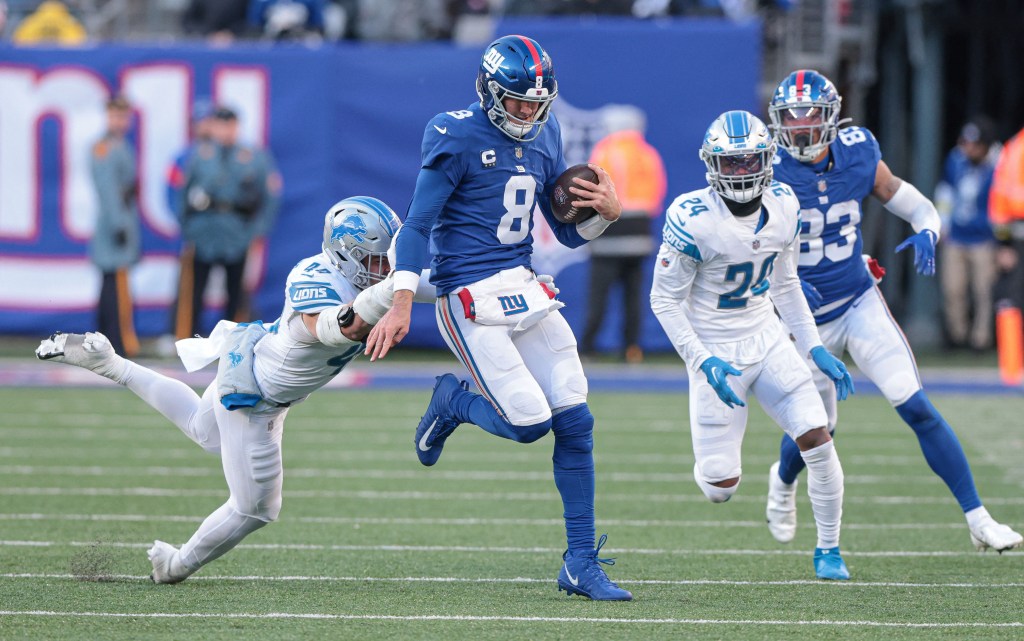 Daniel Jones runs the ball up the field during the Giants’ loss to the Lions.USA TODAY Sports

Center Jon Feliciano, who played with Josh Allen in Buffalo, told The Post he “100 percent” believes Jones can be an NFL star who approaches Allen’s level of play, in part because of his athleticism. “He’s able to get 8 yards with his feet when guys are dropping in coverage, which some guys in this league can’t do,” Feliciano said. “It’s huge when you’re able to do that.”

Jones did run for 79 yards on only nine carries against Dallas in the 23-16 September loss. If the Cowboys put a spy on him Thursday, well, he will have to outfox and outrun that spy.

Hey, nobody said this was going to be easy. But if Daniel Jones can improvise enough to win this game and ultimately carry this haggard and motley crew to the playoffs, the Giants should reward him with the 2023 starting job and a new contract … if not at Aaron Judge prices.