Blues rip Wild to advance into second round of NHL playoffs ST. LOUIS — It was a Jordan Binnington type of game.

The St. Louis Blues goalie has earned a reputation as a clutch performer when the team has a chance to close out a playoff series. And he proved it again Thursday night.

Binnington made 25 saves and the Blues beat the Minnesota Wild 5-1 in Game 6 to advance to the second round of the Western Conference playoffs. The St. Louis goalie improved to 5-1 in potential series-clinching games.

Ryan O’Reilly, Tyler Bozak and Vladimir Tarasenko scored in a dominant second period during which the Blues outshot the Wild 22-5 and took control of the game.

Nick Leddy also scored, Colton Parayko added an empty-netter and David Perron had two assists as St. Louis won its first series since defeating the Boston Bruins in the Stanley Cup Final in 2019.

“It was a tough, tough battle,” Bozak said. “That’s a very good team over there. It’s kind of a shame we played in the first round of the playoffs. It was two of the top teams in the West and they deserve a lot of credit for the season they had.” 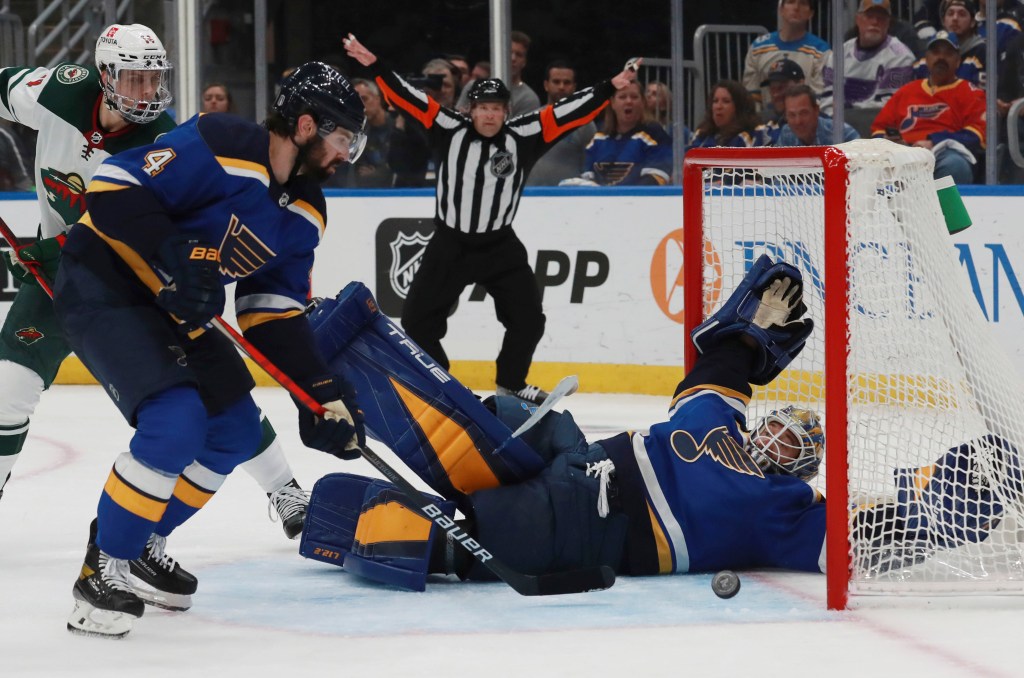 Jordan Binnington lays out to stop a shot for one of his 25 saves in the Blues’ 5-1 series-clinching win over the Wild.AP

The Blues will travel to Colorado to face the Avalanche in Game 1 of the second round. The dates and times for the series had not yet been announced.

Matt Dumba scored in the third period for the Wild, who hit three posts in the game, including two in the third.

After losing Games 4 and 5 and facing a must-win, Wild coach Dean Evason started Cam Talbot over Marc-Andre Fleury in goal. Talbot, who finished the regular season on a 13-0-3 run, made 22 saves.

“This is one of the most special groups I’ve been a part of,” Talbot said. “We’re really building something here. So, as much as this hurts right now, I’m proud of the guys, proud of the way we battled all season long.”

Leddy gave the Blues a 1-0 lead with 5:01 left in the first period. It was the first goal by a Blues defenseman in the series.

“There are a lot of emotions coming home and the building was electric and, yeah, everybody was kind of caught watching a bit and obviously Binner did an amazing job of shutting the door there early and then Ledds makes a great play and a great goal,” O’Reilly said. “That just kind of helped us kind of settle down and start you know, building our game.”

Binnington helped the Blues overcome a shaky start in the first by erasing several quality Wild chances coming off turnovers. He also got help from his post on Marcus Foligno’s shot.

“We had a good first period and kind of weathered the storm,” Binnington said. “They came out hard and they were playing desperate and I think we matched that and then we came out in the second period and played really hard.”

O’Reilly’s power-play goal gave the Blues a 2-0 lead midway through the second period. Brayden Schenn set up the one-timer from the slot with a perfect pass from behind the net.

Bozak cleaned up a rebound off Alexei Toropchenko’s shot to extend St. Louis’ advantage later in the second. Toropchenko created the chance by getting around Mats Zuccarello while driving to the net.

“Just follow the big boy to the net,” Bozak said. “He made a great play, a nice move, and I was lucky enough to be in the right spot at the right time and have an open net there.”

Tarasenko’s power-play goal with 1:24 left in the second made it 4-0. It was his fourth goal in the last two games.

“We’ve been able to handle adversity, we’ve been a bounce-back group and we got to this spot tonight and we didn’t handle it very well,” Evason said. “You know, why? We’re gonna have to sit down and evaluate individually and collectively.”

blues advance second round playoffs
Read The Rest at
nypost.com Robert Lewandowski To Not Renew Contract With...