As if there aren’t already enough awards handed out in the movie and TV business, BAFTA has decided we need some more for North America.

The organization, which has annually handed out Honorary Awards at a once a year black tie dinner in Beverly Hills (the last being in a pre-pandemic 2019, especially memorable for a Jane Fonda taped acceptance speech as she was being arrested during a protest in D.C.) has decided to expand that activitity and “evolve” that ceremony, which were known as the Britannia Awards, into a year round and more targeted enterprise, thus the newly renamed BAFTA Special Awards which will continue to go to  “those that have made a significant, inspiring and outstanding contribution to film, games and television through a particular project(s) and/or their work”.

Special Awards recipients in North America will receive the traditional BAFTA mask with presentations throughout the year replacing the aforementioned yearly dinner (usually at the Beverly Hilton), with the inaugural event expected to take place in Los Angeles, although no word yet as to who will be the recipient or when it will happen. Special Awards are in the gift of BAFTA and recipients can be put forward by members, the sector committees and the BAFTA North America Board, chaired by Kathryn Busby. 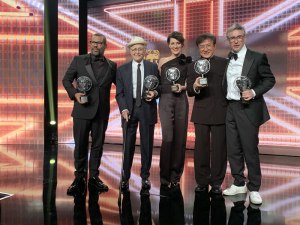 The implementation of this new way of presenting BAFTA awards outide the high profile British-based ceremonies for Film and TV annually taking place in London, comes following the group’s reevaluation of giving their honorary awards, and following a year after the organization’s increase of North America operations that has already included expanding  membership benefits, growing its Learning, Inclusion and Talent programs, and an inaugural presence at the Toronto International Film Festival.

BAFTA has had a presence in the US since the formation of BAFTA Los Angeles in 1987, followed by BAFTA New York in 1996. Now, with almost 2,000 members in North America, activities include its extensive Screenings and Q&A program, Tea Parties, BAFTA Breakthrough USA, the Yugo BAFTA Student Awards, the US Newcomers Program, Scholarships, and the Vance Byrd Mentorship program. This new initiative will ideally also include ceremonies in cities other and LA and NY.

Kathryn Busby, Chair of the BAFTA North America Board said, “This is an incredibly exciting moment for BAFTA, as we evolve and expand our award presentations and activities. Creating the opportunity to present awards year-round and celebrate excellence at more locations was a priority for our Board this year as we expand BAFTA’s mission and activity across North America, so we are delighted to be able to now announce this new direction.”

Matthew Wiseman, Executive Director and Head of North America for BAFTA said, “To be able to capture the same spirit and warmth of the Britannia Awards event, and now present honorary awards throughout the year and in different cities, is an exciting prospect that will enable BAFTA to celebrate those who have made exceptional contributions to our industry in even more impactful and unique ways. We will also be able to use these moments to further inspire future generations of talent across our industry, many of whom will in turn be supported by BAFTA’s many Learning, Inclusion and Talent programs globally.”