Q: Whatever you want to say about some of your teammates: Nick Bosa?

A: A silent assassin.

Q: Who’s the biggest trash talker on your defense?

Q: How is your smack game?

A: I let my pads do the talking. I think that’s what our trash talk is. Guys will say stuff, chirp here and there, but if you put the tape on and you watch how our guys run to the ball, that’s trash talk in itself.

A: He’s a Sacramento legend. But on the field he is detailed to a tee, I’ll put it that way, a guy that’s consistent every play. 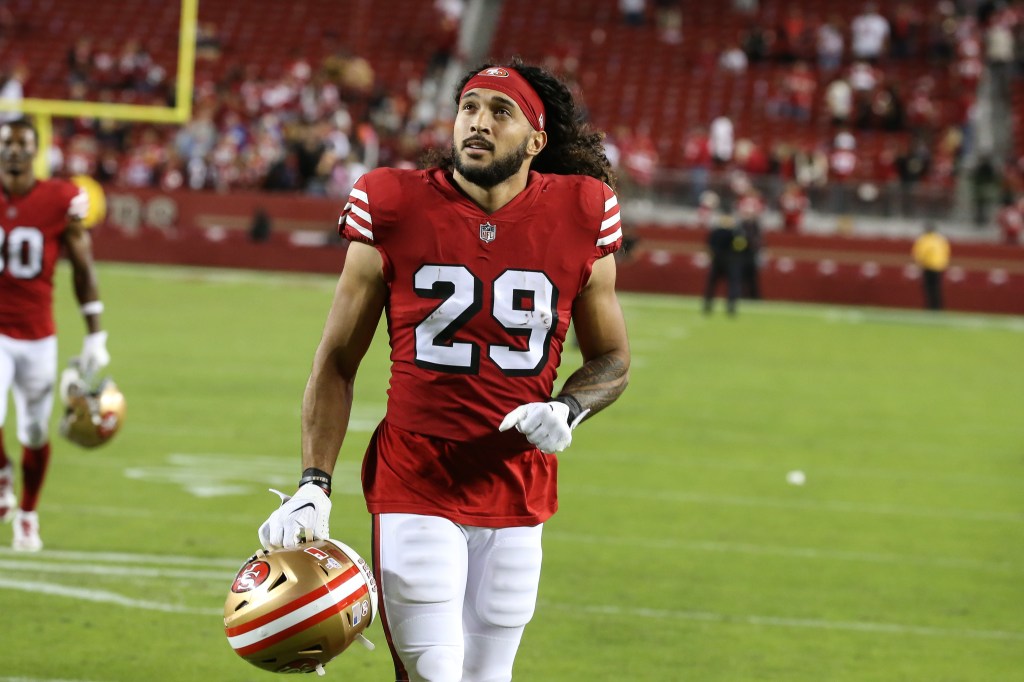 Talanoa Hufanga and the 49ers play the Cowboys on Sunday. Icon Sportswire via Getty Images

A: Brock Purdy is amazing. I love him. On the field I would say he’s confident for sure.

Q: Can you give me an example?

Q: He’s unflappable? Nothing fazes him?

A: Yeah. I would say that’s a good word.

A: If I was to give him one word for his game, I’d describe him as versatile, for sure.

A: Nobody can stop him. That’s what he tells me (laugh). He’s a guy that just runs and guys are just bouncing off of him. He’s just dominant, for sure.

A: Intelligent. His scheme is unreal, puts so, so many things into place, moving parts.

Q:. What do you like best about your defense?

A: The tenacity. I think the swarm. Guys running around as fast as they can and as physical as they can to really get everybody eager to make a play. And when everybody does those things right, great things will happen.

Q: Do you think there’s a more physical team in the NFL than your team?

A: For us, that’s a tough question ’cause I don’t want to be a cocky player. But I’m confident in my team I can tell you that. 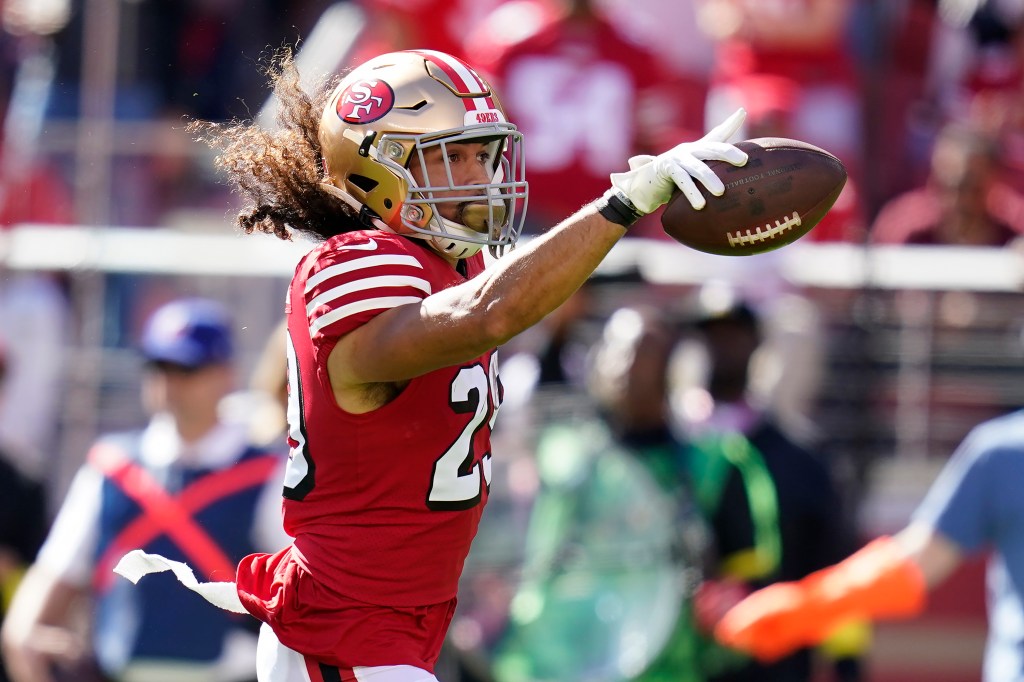 Talanoa Hufanga overcame adversity before starring for the 49ers. AP

A: He’s very poised. A guy that continues to call a great game each and every week, and he puts in the right spots to continue to make plays.

Q: You hope he gets a head-coaching job but at the same point he doesn’t, right?

A: He’s deserving of everything he’s gonna accomplish in his coaching career. A guy that is truly special to be around each and every day. So whatever happens, I wish the best for him, whether that’s staying or leaving for sure.

Q: Why do you call yourself “The Tongan Tiger” on Instagram?

A: I thought it was pretty funny ’cause there’s no tigers in the island of Tonga. I really love the animal itself, and I thought it’d be kind of cool to name myself that ’cause that’s how I feel when I’m on the field. That presence, being able to just run around and hunt.

Q: So there’s your on-field mentality.

Q: From your Instagram: “Been through a lot of tough situations I did everything but fold.”

A: I’ve been through a bunch of surgeries. There’s a point in life where … [I] didn’t think I was gonna play football anymore just with all the surgeries I’ve had on my shoulder, everybody didn’t expect me to come back. But I continue to get through those things, and life situations. Everybody has them. We just gotta continue to be strong and push through each and every situation you come across.

Q: How many surgeries have you had?

A: I had two on my right shoulder.

Q: And you didn’t think you’d make it back at one point?

A: Yeah, I got about … let me see … 12 screws, in a plate, in my right side. A lot of people don’t really get that surgery, so it wasn’t common. And even coming back, it wasn’t something that we thought was gonna be ready to go in college [Oregon State] and stuff, and even before that.

Q: What does it say about you that you’re now excelling on the pro level?

A: I really love what I do, and my faith keeps me grounded. It’s able you keep me on a straight path. When things get weary, you just gotta continue to persevere, and those are the situations that you can’t fold in that I’m talking about.

A: The mind is everything. If you can control that, great things will happen for sure. 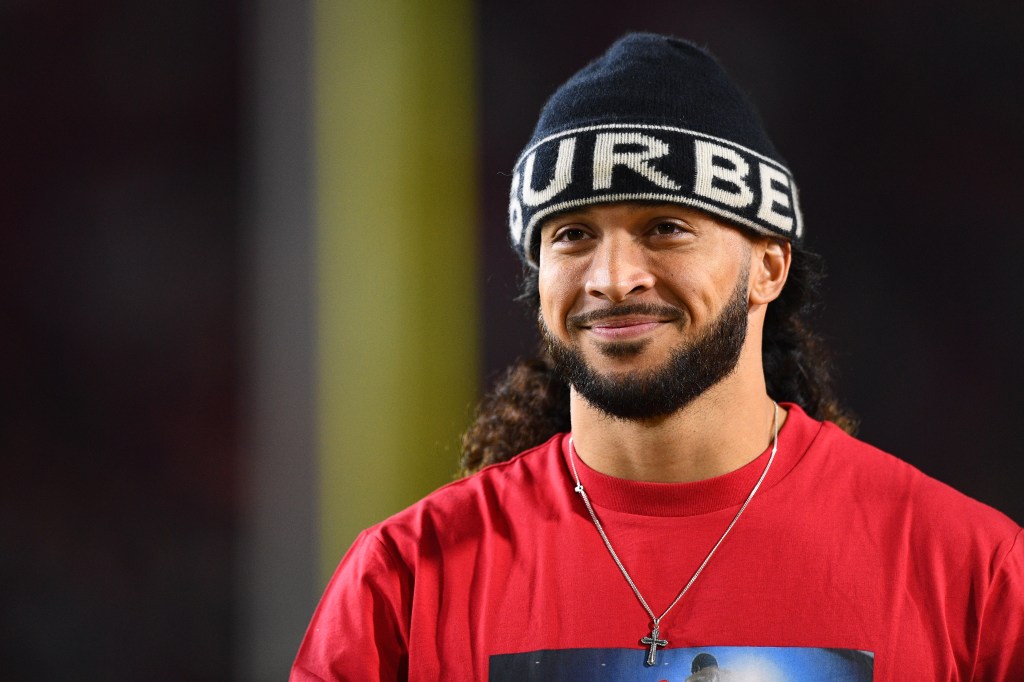 Q: “Fear ain’t in the heart of me, I learned just do it, you get courage from your fears right after you go through it.”

A: I think I posted that one high school. I had just got disqualified from a track meet in the 100 ’cause I false-started. I was seeded first going into the race. So for me it was kind of like I fear God, and so for me just going in there, you can’t have no fear of what the outcome is gonna be, you can’t control your surroundings, so it’s something that I had messed up on. It’s probably one of the biggest mess-ups I had at the time, and so for me just continue to push through and be myself, for sure.

Q: “Life is an obstacle, we knock ’em down like dominoes.”

A: It’s actually a good friend of mine [Wallie] that sang that lyric, so it resonated with me ’cause it makes sense. … So life is a domino and if you can continue to just attack each and every day, those things add up.

Q: You had other obstacles to overcome?

A: For me it was just going through life as everybody else does, everybody has tough situations, everybody’s background is different. My dad grew up on dirt floors in the island of Tonga, and for me just seeing that and being able to visit, see where he lived, it was something that really changed my mindset of how I want to proceed with my life. There’s a lot of different things, I don’t want to go into too much detail, but it’s stuff that I got to see as a young kid, that I just wanted to go out there and continue to do what I do at the highest level.

A: Internally you know it wasn’t good enough, and there’s plays that are left out there to be made, so never get complacent is pretty much what I’m trying to say.

Q: Did you expect to make an immediate impact in the NFL, making the Pro Bowl in your second season?

A: I expected to come in here and do whatever they asked me. Last year I understood where my role was, it was on special teams, it was as a backup safety, and I got to learn a lot.

Q: Did you think you would be drafted higher than you were, fifth round in 2021?

A: No, no. I think it’d been cool, but at the end of the day, I love being the fifth round. It gave me a lot of time to come in and learn the system, be around great guys.

Q: What is the one criticism you thought was the most unfair?

A: I criticize myself on a daily basis, not giving my best every day, and that’s because I’m competitive within myself. People can say whatever they want, but internally I know at the end of the day, I gotta do what I gotta do to be successful.

Q: What drives you? 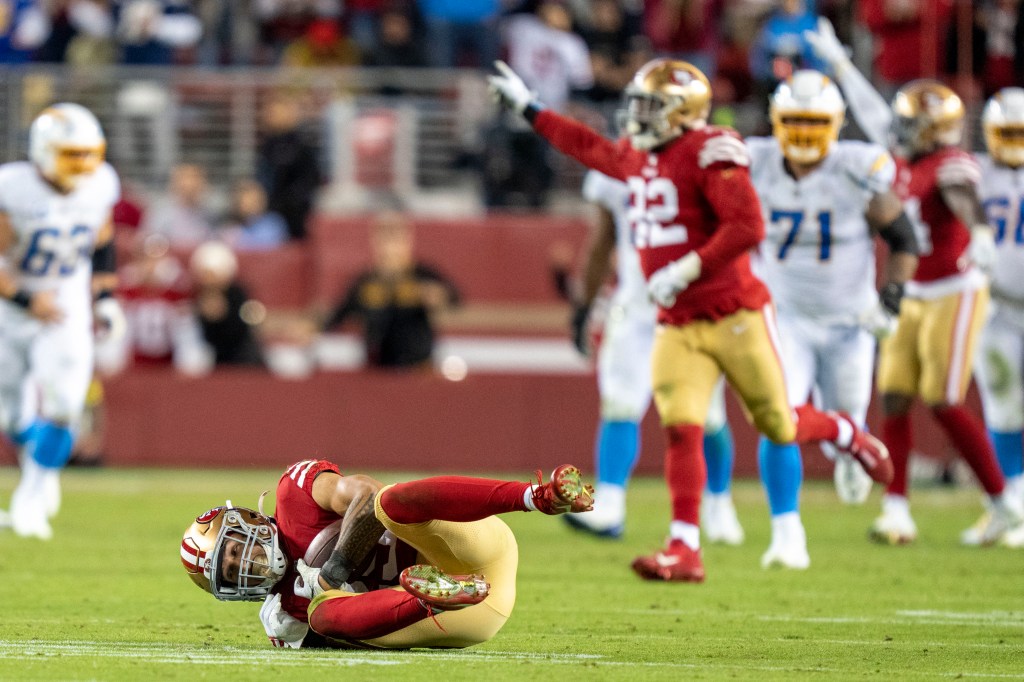 Talanoa Hufanga intercepts a pass during the 49ers’ win over the Chargers on Nov. 13. USA TODAY Sports

Q: Did you have other boyhood idols?

A: There’s a guy by the name of Al Afalava, he played safety at Oregon State back in the day when I was growing up. That was my hometown person that I used to watch. He’s a Tongan safety as well.

Q: If you could cover any tight end in NFL history, who would it be?

A: George Kittle. I get to cover him a lot, which is fun.

Q: If you could pick the brain of any safety other than Troy Polamalu, who would it be?

A: My girlfriend’s sister is married to De’Aaron Fox.

Q: And you go to Kings games when you can?

A: My mom, my dad and my lady. My brother would make the cut, too.

A: I’d have one more, so seven total from my family side.

Q: So who’s the seventh?

A: My mom, my dad, my brother, my lady, so that’s four, my grandparents from my dad’s side and then my grandma from my mom’s side, so yeah, it’d be seven.

Q: How proud of your heritage are you?

A: I’m deeply proud, deeply enrooted. That’s what I strive, I try to be a good life for my culture for sure.

Q: What do you hope 49ers fans say about you?

A: That I’m a better person than I am a player.

Q: What do you hope they say about you as a person?

Q: What do you know about the 49ers-Cowboys rivalry ?

A: I don’t know too much. A lot of people have talked about. This is gonna be my first game being able to play in against them, so I’m truly pretty excited to get out there.

Q: What are your thoughts about Dak Prescott.

A: Great quarterback. Versatile. A guy that can throw the ball, can run the ball. Has really good pocket awareness, and a guy that delivers a pretty good ball for sure.

Q: Have you dreamed of hoisting the Lombardi Trophy?

A: I have, and it’s something that I get to talk about with certain people that have made that experience. And for me, even like being able to talk with Troy about it. … It’s an incredible feeling that he talks about. I think that’s what every NFL player arrives to get. It’s something that’s special to everybody for sure.

Q: Was your dream to play in the NFL?

A: My whole life, yeah. I used to write it down on everything — posters, assignments. You know, you come back with an assignment from a fourth-grade teacher, and I end up writing in there what I want to be when I grow up. I wrote it down my whole life. I used to watch a lot of rugby growing up, and then we started watching a lot of football highlights with my dad. I wasn’t allowed to play until I was a little bit older, but my brother started playing and that’s when I got into it for sure. I started playing when I was in third grade. I played everything. I liked having the ball in my hands. When I was in high school I played quarterback, but I knew I was gonna play defense when I got to college. That was kind of my motto. I wanted to give the hits than take the hits.

Q: What kind of quarterback we’re you?

A: I was a dual threat. No Brock Purdy, but I was able to go out there and do my best. ‘Avatar: The Way of Water’ stays afloat at box...