Yankees’ ugly season still has chance to be beautiful Amid this roller-coaster Yankees season — “You’ve got to enjoy the ride,” Aaron Judge advised the club’s fans on Monday — you can find one consistent adjective.

An ugly season that still features the potential to become beautiful.

The Yankees won ugly Tuesday night, slamming five homers to post a 7-2 victory over Baltimore to exact a slice of Oriole Park at Camden Yards vengeance against the O’s, Major League Baseball’s worst entity, who took two of three from Aaron Boone’s bunch during Labor Day weekend in The Bronx.

With their third triumph in four tries, the Yankees (81-64) tied the Blue Jays (81-64), who lost to the Rays, for the American League’s top wild-card spot. Both teams are one percentage point ahead of the Red Sox (82-65), who beat the Mariners later in the night.

Kudos to the Yankees for halting the heinous stretch in which they dropped 12 of 15 (which of course followed their historic 13-game winning streak), dropping out of the postseason brackets altogether late Sunday night before climbing right back. Man, though, they make nothing easy. Not even a win over the Orioles with ace Gerrit Cole on the mound and balls flying out of the park off Yankees bats. 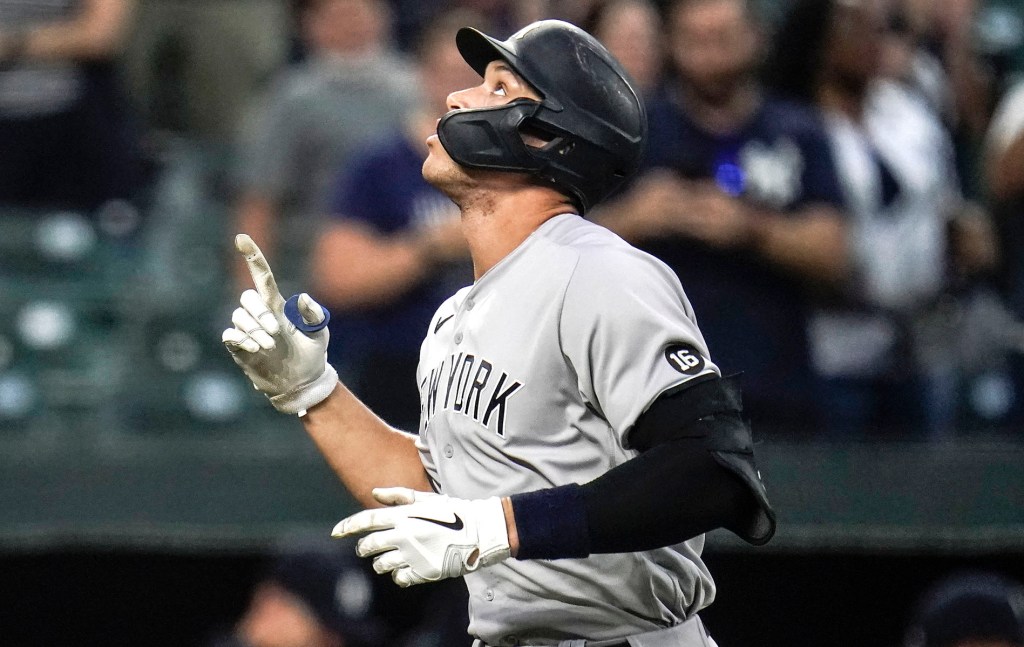 Aaron Judge points to the sky after belting a two-run homer in the first inning of the Yankees’ 7-2 win over the Orioles. AP

Cole, making his first start in seven days after leaving his Sept. 7 start with tightness in his left hamstring, needed 108 pitches to make it through five one-run innings against these guys. Especially stressful for the right-hander (and surely his teammates and superiors) were the first inning, when he threw 29 pitches and escaped a bases-loaded jam, and the fifth, when he stranded Orioles at first and second after permitting the one run.

“I would’ve liked to have pitched a little deeper,” Cole acknowledged, “but Mike King picked me up pretty well.”

King did, although not before starting with some angst: Gleyber Torres committed his first 2021 error at second base, joining the 18 he made at shortstop, giving the O’s first and second with none out. Torres cleaned up his own mess by turning Pedro Severino’s 100.4 mph bullet into a twin-killing, although Boone lifted Torres in the eighth, inserting Tyler Wade at shortstop and flipping DJ LeMahieu (from third base to second) and Gio Urshela (from shortstop to third base). Afterward, the manager said he didn’t anticipate that being the norm late in games the Yankees are leading.

Said Boone, cryptically, of his decision to take out Torres: “Just a number of things, I thought it was the right thing to get him out of there tonight.”

And in the ninth, the just-returned Sal Romano recorded only one out as three Baltimore batters reached base, prompting Boone to warm up closer Aroldis Chapman — who entered the game after Romano injured his throwing hand trying to barehand Kelvin Gutierrez’s bullet up the middle. Good grief, so much drama.

Back in 1983, before most of you were born, Rangers manager Doug Rader derided Tony La Russa’s White Sox by proclaiming, “They’re winning ugly.” The White Sox adapted that as their identity and rode it all the way to the AL Championship Series.

Maybe the Yankees can call La Russa, managing the Chisox once again, and ask him if he still has any “Winning Ugly” T-shirts lying around. No matter that the average size of a ballplayer has roughly doubled since then. Those T-shirts would fit these Yankees.

“This is the fun time of year, where you want to be chasing October baseball,” Boone said afterward, although I suspect that, say, the Rays are having even more fun, their lack of a roller coaster notwithstanding.