In the eighth inning Wednesday, Gleyber Torres’ brain cramp contributed to the Yankees losing the lead. In the ninth, his clutch single helped them go back ahead and ultimately leave Camden Yards with a 4-3 victory over the Orioles.

In the eighth inning Wednesday, Gleyber Torres’ brain cramp contributed to the Yankees losing the lead.

In the ninth, his clutch single helped them go back ahead and ultimately leave Camden Yards with a 4-3 victory over the Orioles.

It was yet another interesting day in this bizarre season for the 24-year-old infielder.

Torres, pulled from Tuesday’s win because manager Aaron Boone was unhappy with his lack of hustle and concerned about his defensive shortcomings, may have swung and ran his way back into the Yankees’ good graces after another hiccup in the field.

After Luke Voit led off the ninth with a walk, Torres singled to center field off Orioles reliever Tyler Wells, then stole second as part of a double steal with Tyler Wade and scored the game-winning run on Brett Gardner’s bloop single. 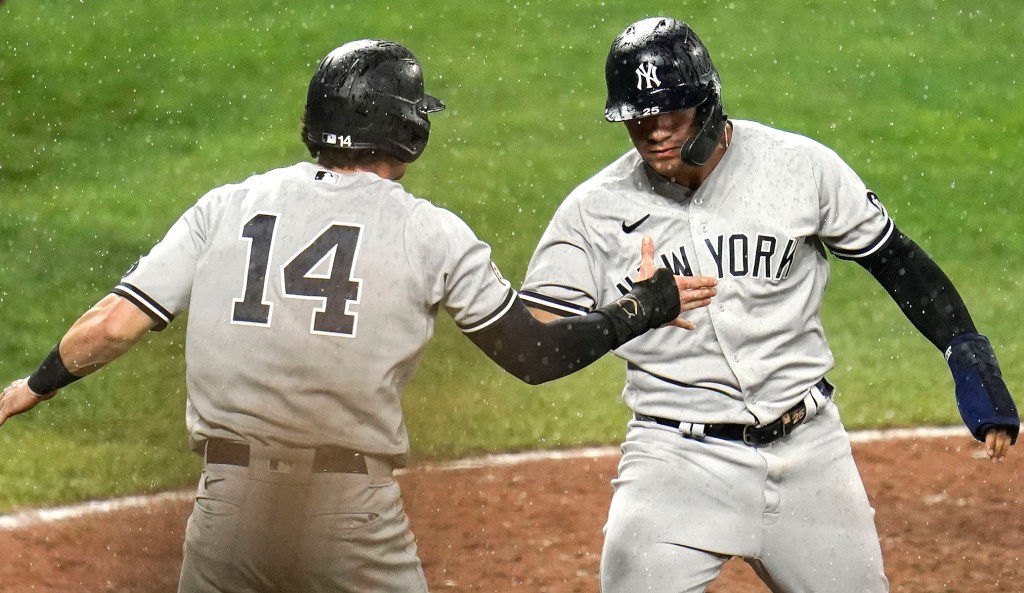 Gleyber Torres (right) and Tyler Wade celebrate after scoring on Brett Gardner’s game-winning two-run single in the ninth inning of the Yankees’ 4-3 win over the Orioles.AP

“I think it was important, just a really tough at-bat he threw up there,” Boone said after the Yankees won their third straight game, on the heels of 12 losses in 15 games. “It’s a big spot there and I think he did a really good job within the at-bat. … He helped set us up big-time in that inning.”

An inning earlier, Torres had made a mental mistake. With the leadoff runner on base in the bottom of the eighth, Cedric Mullins hit a rocket toward Torres at second. Torres, moved from shortstop to second base on Monday as his defensive problems have worsened, fielded the ball after a brief bobble. But he immediately threw to first base instead of second, for what may have been a double play. Instead of two outs, the Yankees only got one. And with two outs, Austin Hays took Chad Green deep for a go-ahead, two-run homer.

“Initially, [Austin] Wynns kind of freezing on him a little bit just threw him off,” Boone said, referring to the Orioles’ catcher who was the runner at first. “Obviously it was a play he should’ve ended up going to second. He had the time, but ended up taking the out at first.”

Before the game, Boone addressed pulling Torres in Tuesday’s eighth inning. He said it wasn’t only about his defense, but his failure to run out a ground ball. The two spoke about the play that irked the manager.

When asked if it bothered him that Torres didn’t bust it down the line after grounding out, Boone said: “A little bit, yeah.”

This has mostly been a lost season for the young infielder, who has battled injuries, a false-positive COVID-19 test that sidelined him and struggles both in the field and at the plate. As recently as 2019, Torres hit 38 homers, drove in 90 runs and posted a strong .871 OPS. This year, he has an anemic .253/.324/.350 slash line with a .674 OPS and just seven home runs in 397 at-bats. He also has committed a career-worst 19 errors.

But on Wednesday, Torres helped the Yankees win an important game — even if he was partly responsible for them falling behind in the first place.