TORONTO — Giancarlo Stanton has made a habit of getting hot in the postseason. The Yankees have to hope he’s able to do so again this year.

The designated hitter struck out four times Tuesday in a 5-2 division-clinching win over the Blue Jays and is 1-for-17 with 11 strikeouts in his last four games.

More alarmingly, after driving in three runs on Aug. 25, in his first game back after a stint on the injured list with left Achilles tendinitis that began in late July, Stanton has mostly been a mess. He entered Tuesday 13-for-87 (.149), with a double, four homers, 11 RBIs, 11 walks and 35 strikeouts to go along with an OPS of just .544 in 24 games.

The notoriously streaky Stanton is running out of time to get himself right for the postseason.

Yankees manager Aaron Boone said, regarding Stanton’s slump, the team will continue to “ride it out.” 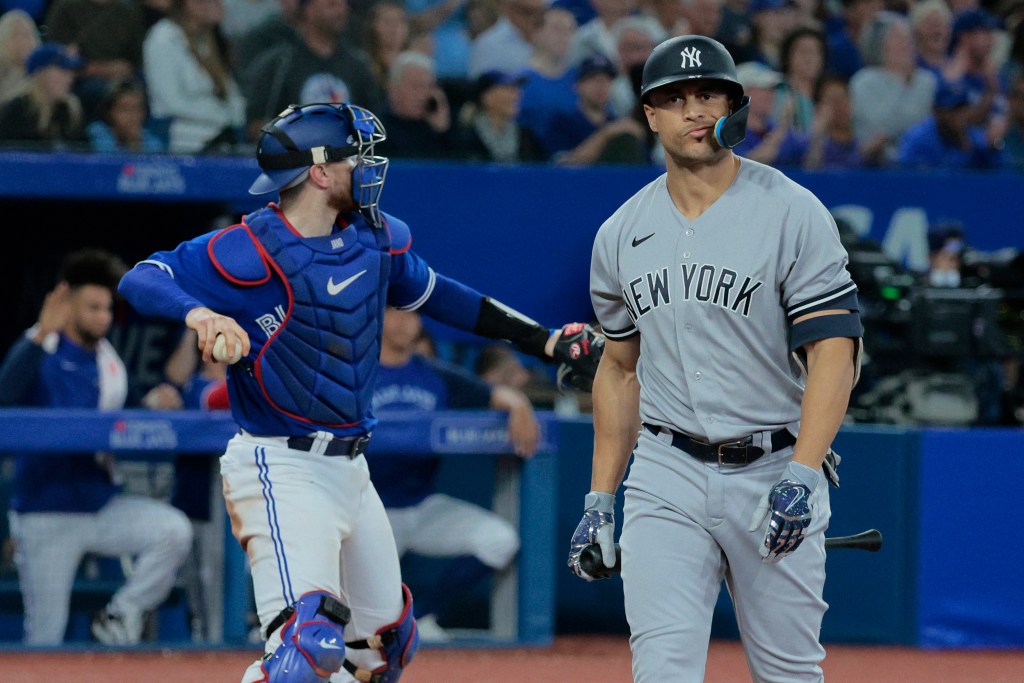 “We’re just trying to find that good stretch, that good timing to where — we’ve seen it happen overnight,” Boone said. “When he locks it in, he becomes as good and dangerous as it gets. Hopefully he can get there.”

Stanton, as Boone noted, has had “flashes,” including a game-winning grand slam in The Bronx on Sept. 20 and a three-hit game two nights later, but he is hitting .059 over his past four games.

“He’s gotten a couple big hits [and] a couple big homers for us,” Boone said. “But for the most part, it’s been a struggle to get all the way back to that point. We’re going to keep working at it and hope it clicks here soon.”

And his foot and ankle have been “a factor,” according to Boone.

“But I also feel like it’s not something that should limit him from finding it and still being a wrecking ball once he gets going,” Boone said. “I think he was pretty disciplined and patient about that and being clear about when he was ready to come back. I think he realizes he’s gotta do it when it’s not perfect. He’s working hard to get to that point.”

Now that the Yankees have clinched the AL East Tuesday, Boone said he would look to get players days off.

Asked before the game if Aaron Judge, still one short of Roger Maris’ AL record of 61 home runs, would rest on Wednesday in Toronto before the Yankees have Thursday off, Boone said, “We’ll see.”

Judge hasn’t missed a game since Aug. 3 and Boone bristled at questions about the slugger’s workload before the game.

“You’re really pushing for an off day for Judge,’’ Boone said. “You usually get on me for resting him.”

Boone also noted he wanted to get Zack Britton and Aroldis Chapman more work before the end of the regular season, likely to determine their readiness for the playoffs.

Kyle Higashioka started Tuesday behind the plate for just the fourth time since Sept. 18 and had three hits, two runs and a flyout to deep right field.

“I just kind of want to keep them both going,’’ Boone said of catchers Higashioka and Jose Trevino. “[Trevino] has taken a lot of hits, foul balls and things. He’s doing fine, but wanted to make sure I preserve him. [Higashioka’s] been playing well when he’s had his chances, too.”

Higashioka has had a rough year offensively, but is 6-for-13 with a double, three runs and four RBIs in his past four starts.

Harrison Bader wasn’t in the lineup on Tuesday for the second time in five games. Boone said the Yankees were being cautious and didn’t want to play him three straight days on the artificial turf at Rogers Centre after Bader recently came back from plantar fasciitis.

Bader entered as a defensive replacement for Oswaldo Cabrera in the seventh.

“It’s part of his return [plan],’’ Boone said of the center fielder the Yankees got from the Cardinals in exchange for lefty Jordan Montgomery. “He’s done really well.”

Asked if extra days off would be something the Yankees would consider for Bader in the playoffs, Boone said, “I don’t anticipate that.”

“The way he’s responded so far has been all good,’’ Boone said. “I’m looking at [Tuesday] as kind of the last of it. Obviously, we’ll listen to him and if something pops up, we’ll be careful with it.”