Yankees fall to Mariners in 13 after multiple baserunning blunders

SEATTLE — The Yankees are still a first-place team.

The Yankees couldn’t hit and ran the bases like the Keystone Kops again in Tuesday’s 1-0, 13-inning to the Mariners, their sixth defeat in seven games.

Jonathan Loaisiga allowed a walkoff single to pinch-hitter Luis Torrens with one out and the bases loaded in the bottom of the 13th to score automatic runner Eduardo Suarez in a 1-0 defeat to the Mariners at T-Mobile Park.

The Yankees had the bases loaded with one out in the top of the 13th, but Gleyber Torres struck out and Miguel Andujar grounded out, as they went 0-for-10 with runners in scoring position..

Before that, the Bombers were clueless on the bases in extra innings, with automatic runners thrown out in three straight innings. 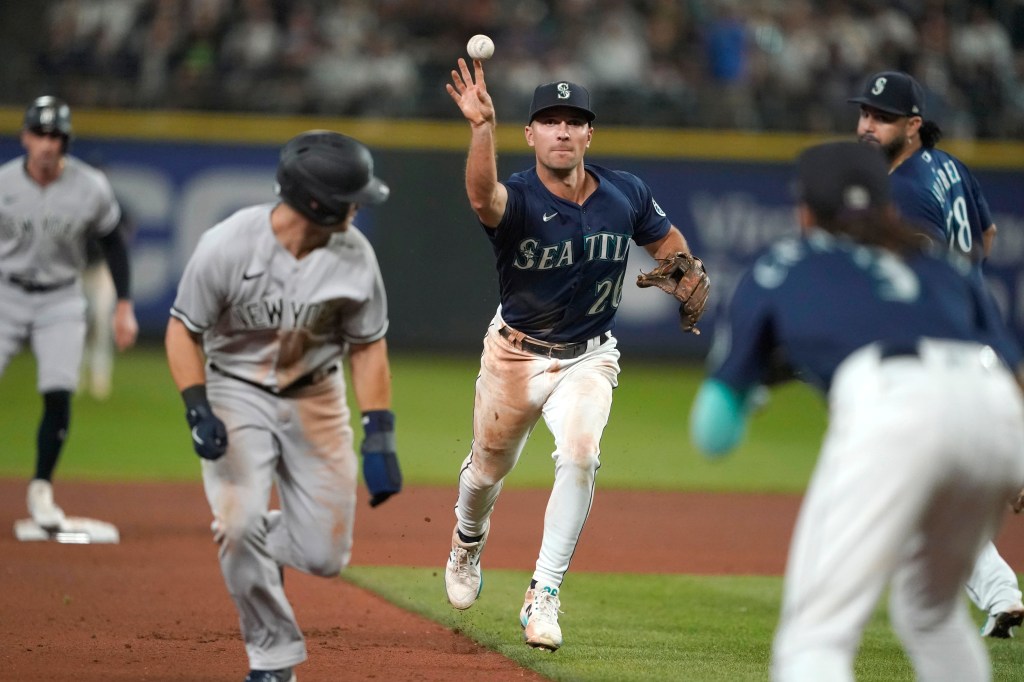 Adam Frazier tosses the ball to J.P. Crawford who tags out Andrew Benintendi after his baserunning miscue in the 10th inning of the Yankees’ 1-0, 13-inning loss to the Mariners.AP

Andrew Benintendi took off to steal third too soon in the 10th. He was caught in a rundown and thrown out between second and third and the Yankees didn’t score.

In the 11th, Aaron Hicks led off with a liner to second. This time, automatic runner Andujar broke toward third and was doubled off second. And in the 12th, Jose Trevino was caught off second on an Isiah Kiner-Falefa comebacker and to make matters worse, Kiner-Falefa was thrown out trying to get to second for some reason. 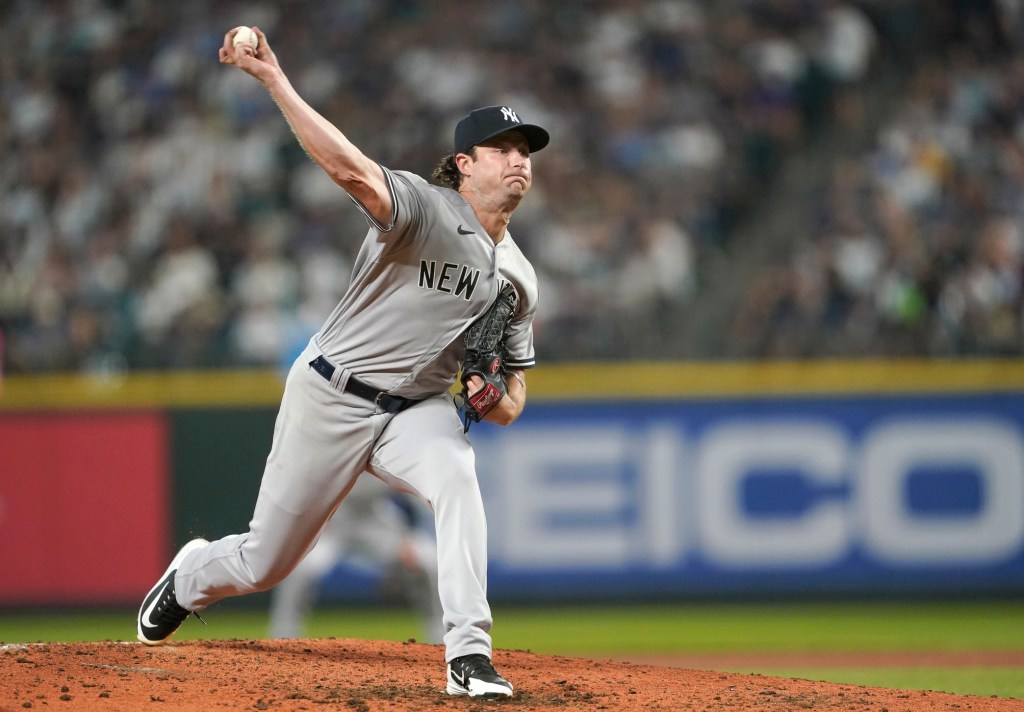 Cole was excellent in his return to T-Mobile Park, where he brought a 1.71 ERA into Tuesday — his lowest mark at any park he has pitched in at least five times.

He redeemed himself after his rough outing against the Mariners last week in The Bronx with seven scoreless innings, while Luis Castillo threw eight innings without allowing a run for the Mariners in the two ace’s second matchup in less than a week.

For Cole, it was a stark improvement over his previous start — when he gave up six runs — and three homers — in the first inning.

Aaron Boone said before the game he hoped Cole would build on the five shutout innings he finished with against Seattle last time- and he did. 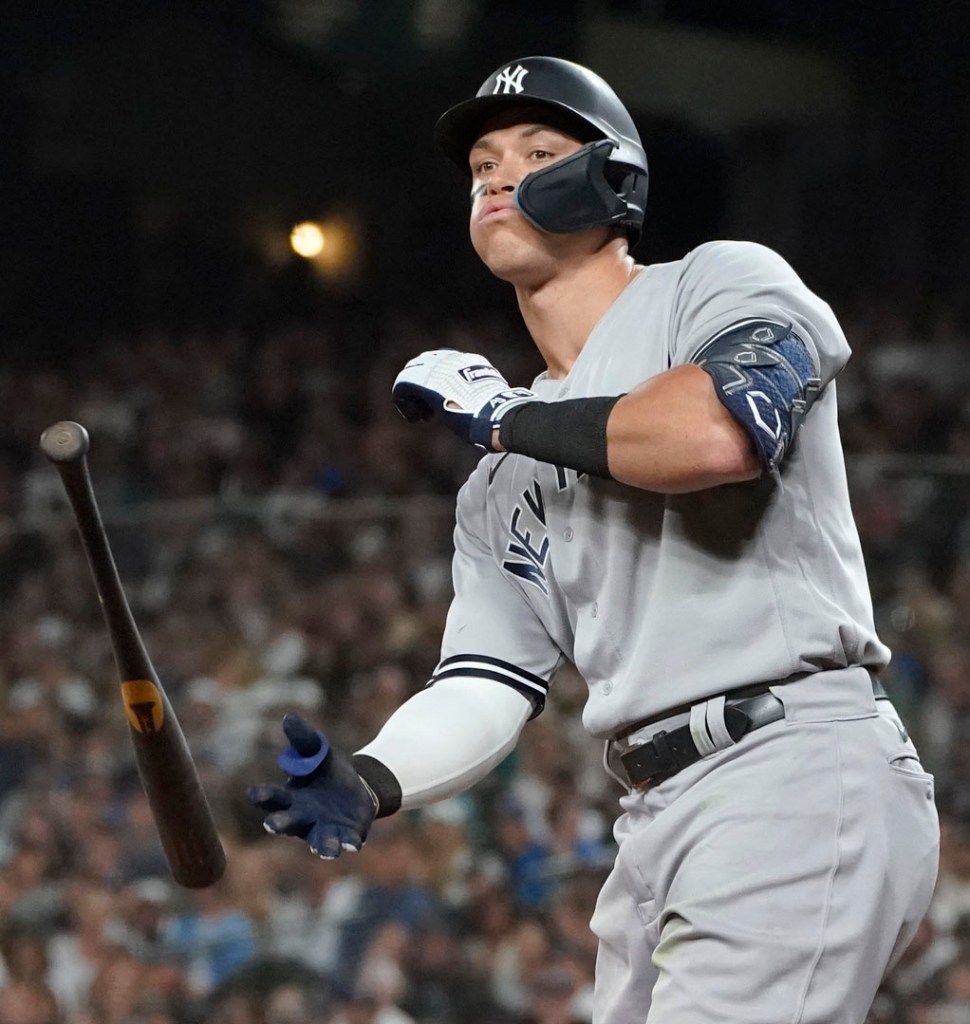 Aaron Judge works a walk in the seventh inning.AP

Cole retired the first seven batters he faced — with the help of diving catches by Aaron Judge in right field and Benintendi in left.

Sam Haggerty singled through the right side with one out in the third for Seattle’s first baserunner.

But Haggerty was quickly erased, thrown out by Trevino attempting to steal second.

The first was a leadoff shot to right-center by Adam Frazier, but Frazier inexplicably tried to stretch it into a double and was thrown out easily by center fielder Aaron Hicks. 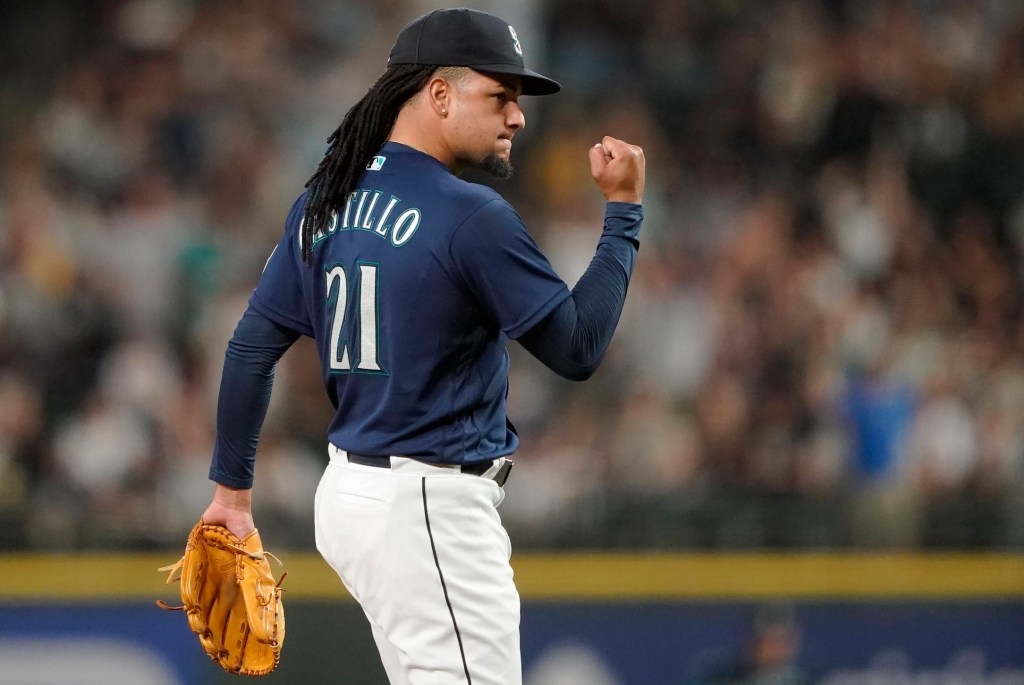 Luis Castillo pump his fist during the seventh inning of his eight scoreless-inning night.AP

Mitch Haniger came up with a two-out single before Cole got Jake Lamb looking to end the inning.

But the Yankees had no better luck against Castillo.

Benintendi singled and stole second with two outs in the first and was stranded when Josh Donaldson struck out.

Judge singled to start the fourth before Donaldson hit into an inning-ending double play.

Cole gave up a one-out double to Raleigh in the fifth that deflected off the glove of a leaping DJ LeMahieu at first. It was Seattle’s first runner in scoring position of the game and Cole rebounded by getting J.P. Crawford to pop out and Haggerty to fly to right.

It was also Seattle’s last runner in scoring position against Cole, as he retired the final eight batters he faced.

The Yankees, meanwhile, didn’t even get another hit until Andujar’s flare to left with one out in the eighth.

Aaron Hicks followed with a walk for the Yankees first runner in scoring position since the first inning.

Trevino then hit a slow chopper to third for the second out, but both runners advanced.

Kiner-Falefa, overmatched by Castillo in his first two at-bats, grounded to second to keep the game scoreless.