ST. PETERSBURG, Fla. — Domingo German began a rehab assignment on Wednesday with three scoreless innings in a start for Single-A Tampa as he works his way back from a right shoulder impingement that has sidelined him since spring training.

“This is a big one,’’ Yankees manager Aaron Boone said of German’s outing.

Provided there are no injury setbacks, German will have to be put on the roster in 30 days. He could serve as rotation depth or pitch out of the bullpen.

Right-hander Albert Abreu, claimed off waivers on Tuesday from the Royals, is expected to be on the roster Thursday, Boone said.

The Yankees will have to make a corresponding move and remove a pitcher from the roster before Abreu comes back.

Clarke Schmidt and Ron Marinaccio are among the relievers who have minor league options remaining. 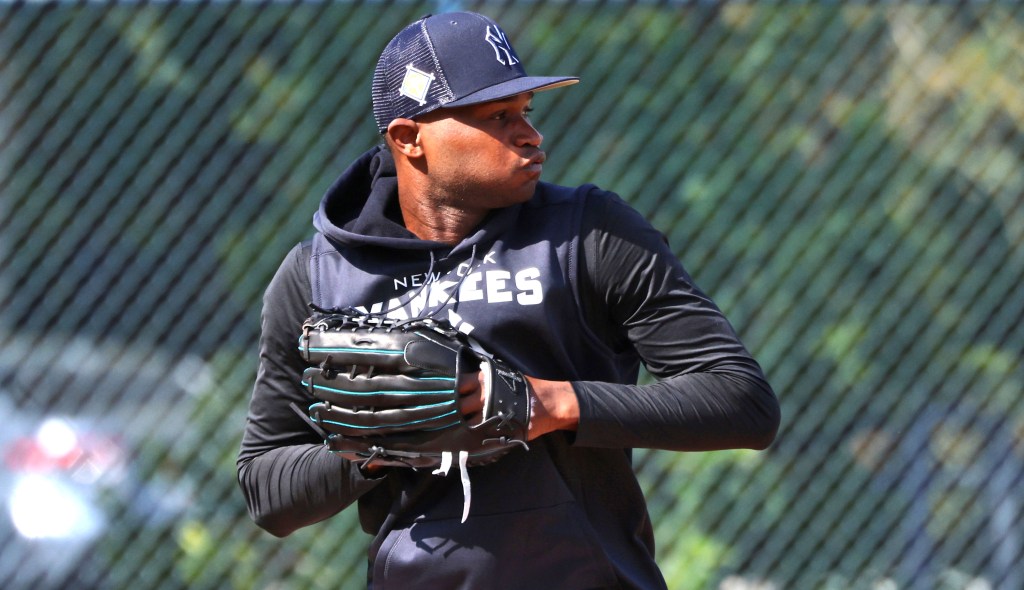 The Yankees also announced Aroldis Chapman will pitch in a rehab game with Double-A Somerset this weekend.

With the looming addition of Abreu and Chapman, the bullpen could look considerably different soon. The Yankees haven’t determined how they’ll use German once he returns.

Right-hander Ryan Weber returned to the Yankees on a minor league deal. He had elected free agency after being designated for assignment last week.

Isiah Kiner-Falefa returned to the lineup Wednesday night for the first time since experiencing left hamstring tightness on Saturday. He reached base twice in the 5-4 win over the Rays.

The Yankees had been cautious in bringing Kiner-Falefa back while playing on the unforgiving artificial turf at Tropicana Field, using Marwin Gonzalez and Gleyber Torres in his place.

Boone said there were no lingering concerns about the injury.

“He’ll get a day [off again] over this stretch before the next off-day [on July 4],” he said. “I assume he’ll bounce back well.”

Kiner-Falefa had been hitting better before the injury, going 10-for-27 with three doubles and six RBIs in his previous seven games, good for an OPS of .874.

The Yankees are facing left-hander Framber Valdez when they open a series against the Astros on Thursday at the Stadium, so Boone wanted to get as many lefty swingers in the lineup as he could on Wednesday against Rays righty Shane Baz.

That meant Matt Carpenter in the starting lineup for just the fourth time since June 3 — and at first base for the first time this year. He went 1-for-3.

Aaron Hicks, who has shown some signs of life at the plate, going 6-for-15 with a double, a triple and four RBIs over a four-game stretch before going hitless on Tuesday, didn’t start (he came in for defense in the eighth inning), but likely would play on Thursday, according to Boone.

Joey Gallo was also in the lineup and extended his recent funk to 0-for-10 with six strikeouts and four walks in his past five games.

Torres, who also didn’t start, grounded out as a pinch hitter for Carpenter and later grounded out again. He had been 8-for-20 with five doubles and a homer in his previous five games.