CHICAGO — The hits — and wins — just keep on coming for the Yankees.

The first-place Yankees extended their winning streak to five games by beating the White Sox, 10-4, Friday night at Guaranteed Rate Field, with just about everything clicking.

A night after they scored a season-high 15 runs, the Yankees knocked around the White Sox’s pitching again for double-digit runs. They also hit four homers for a second straight night, with Aaron Judge hitting his 12th to lead the majors.

And after being moved to the bottom of the lineup, the struggling Aaron Hicks delivered his first extra-base hit since April 12, an RBI double, as the Yankees opened an early lead.

The victory was the 17th in their last 19 games and kept the Yankees 4 ½ games up on Tampa Bay in the AL East, after the Rays knocked off the Blue Jays, who have lost five in a row. 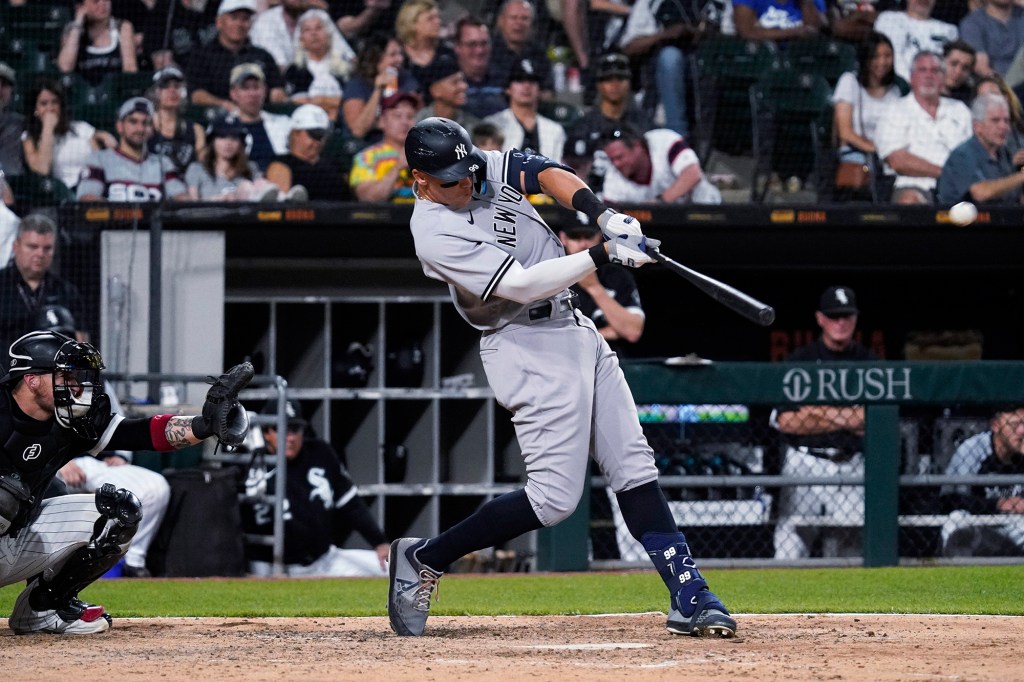 Gerrit Cole, who’d turned his season around by having allowed just one run in his previous 19 innings, was terrific for the first five innings, but was hurt by Isiah Kiner-Falefa’s second misplay of the game.

It came in the bottom of the sixth on a routine grounder by Luis Robert, when Kiner-Falefa made a late throw to first. The play was ruled a hit and Gavin Sheets followed with a homer to right to cut the Yankees’ lead to 7-3.

Giancarlo Stanton hit a first-inning, two-run homer for the second straight night to give the Yankees a 2-0 lead after Judge reached on a one-out walk. Stanton has 10 homers on the season. 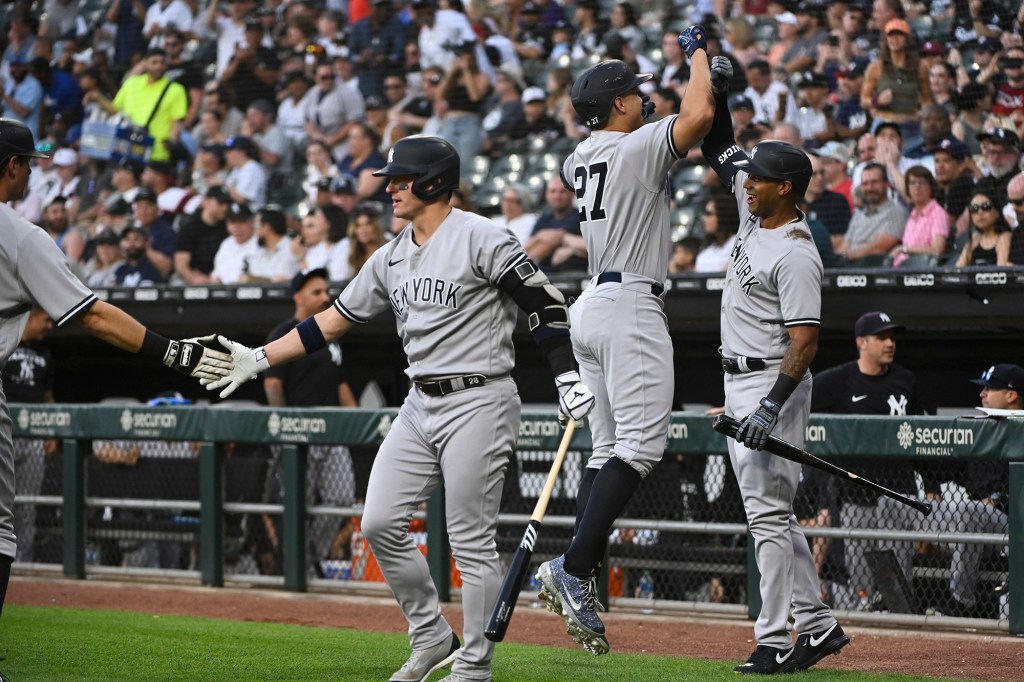 There was some excitement in the bottom of the first after the White Sox loaded the bases.

Tim Anderson led off with a double and Jose Abreu drew a one-out walk. Kiner-Falefa then flubbed what should have been an inning-ending double play grounder from Robert to load the bases.

Cole then went to a full count against Gavin Sheets before striking him out swinging for the second out. 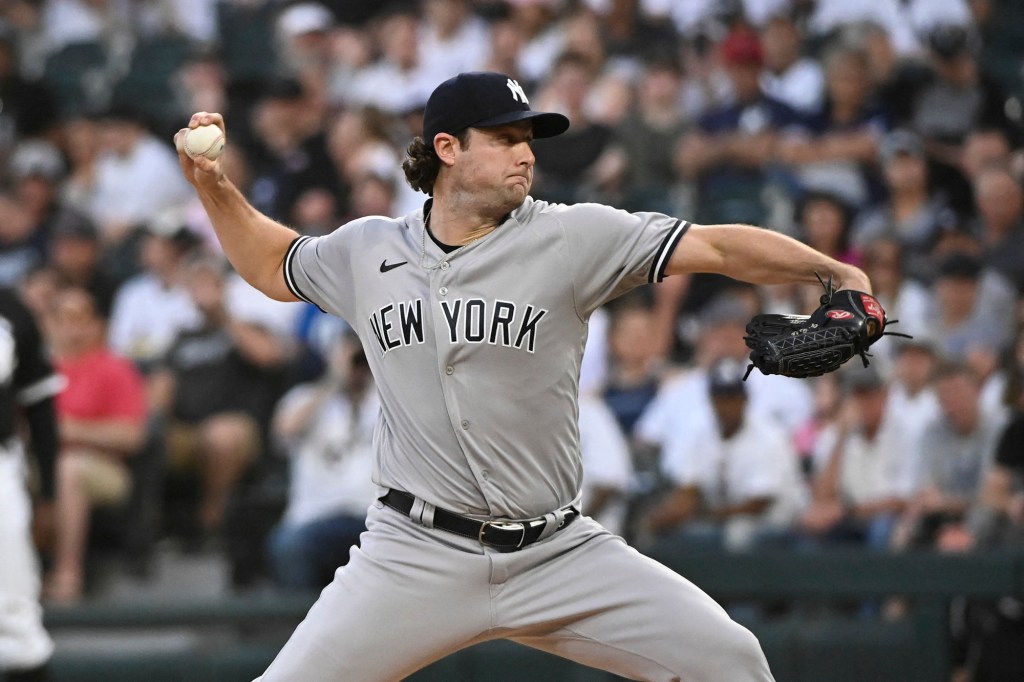 Jose Trevino threw to third in an attempt to pick off Anderson and Josh Donaldson fell on Anderson.

Anderson, apparently believing Donaldson had landed on him intentionally, shoved the third baseman off of him and the two jawed at each other while the dugouts and bullpens started to empty.

Cooler heads prevailed, although Anderson and Donaldson continued their back and forth before Cole fanned AJ Pollock to escape the threat in the 28-pitch inning.

The Yankees scored three more runs off right-hander Vince Velasquez in the second, from some unlikely sources. 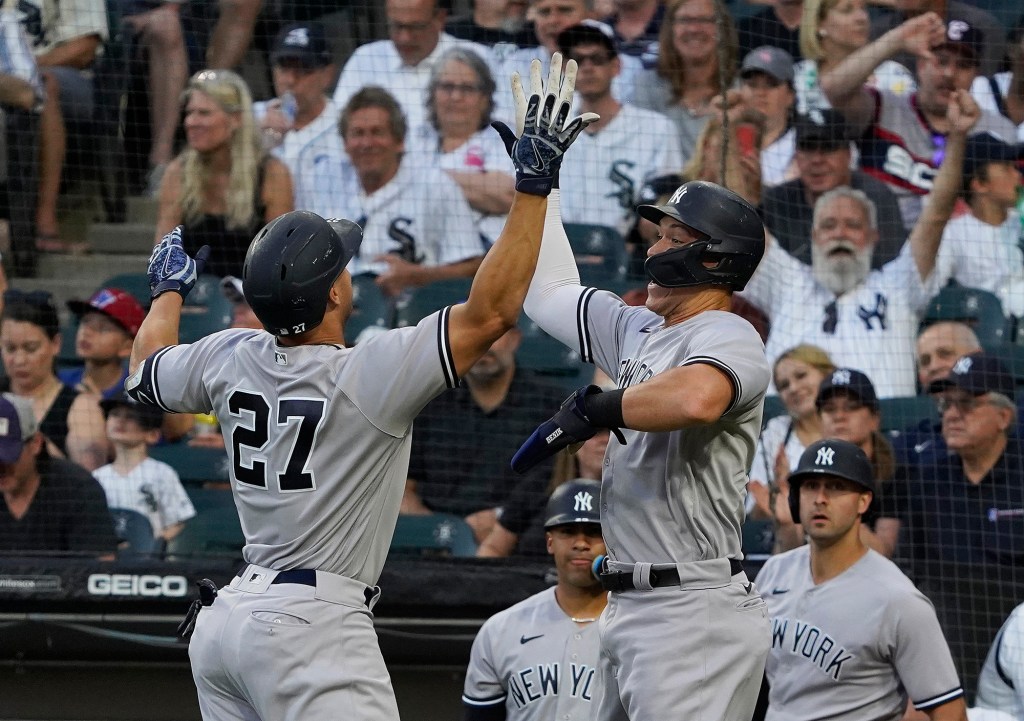 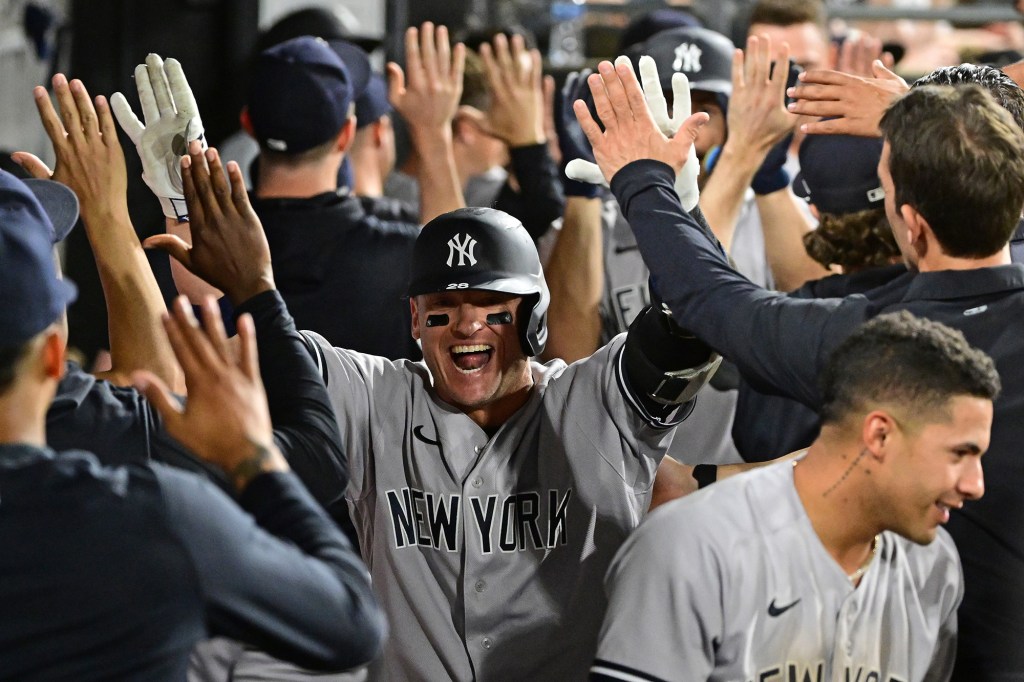 Josh Donaldson celebrates in the dugout after his home run in the eighth inning. Getty Images

Kiner-Falefa, hitless in his previous 16 at-bats, reached on an infield single with one out and moved to third on Trevino’s hit-and-run single to left.

Hicks broke his 0-for-19 skid with an RBI double to right and DJ LeMahieu’s groundout to shortstop drove in another run before Donaldson continued the onslaught with a double to left, driving in Hicks to make it 5-0.

Cole gave up his first run in the bottom of the inning in strange fashion.

With runners on the corners and two out, Cole faked a pickoff throw to first, resulting in a balk that allowed Robert to score from third.

Joey Gallo tacked on another run in the fifth with his fourth home run of the season and Donaldson went deep in the ninth.

Cole ended up with his third consecutive solid start, allowing three runs in 6 ¹/₃ innings and Michael King pitched the final 2 ²/₃ innings to finish it off.