CHICAGO — With the Yankees up by two runs in the top of the ninth on Sunday, Clay Holmes was warming up.

The right-hander would have been used in a save situation if Joey Gallo hadn’t hit a two-run shot in the ninth to give the Yankees some breathing room, as the team looks to be more flexible when it comes to finishing games — instead of relying solely on Aroldis Chapman.

While it turned out not to be a save, Aaron Boone said no matter the situation, he would have used the right-handed Holmes, considering the top of the White Sox’ lineup is filled with righties.

In general, though, Boone said he would trust a number of his pitchers in that spot, singling out Jonathan Loaisiga and Chad Green.

Both of them have struggled at times this season. 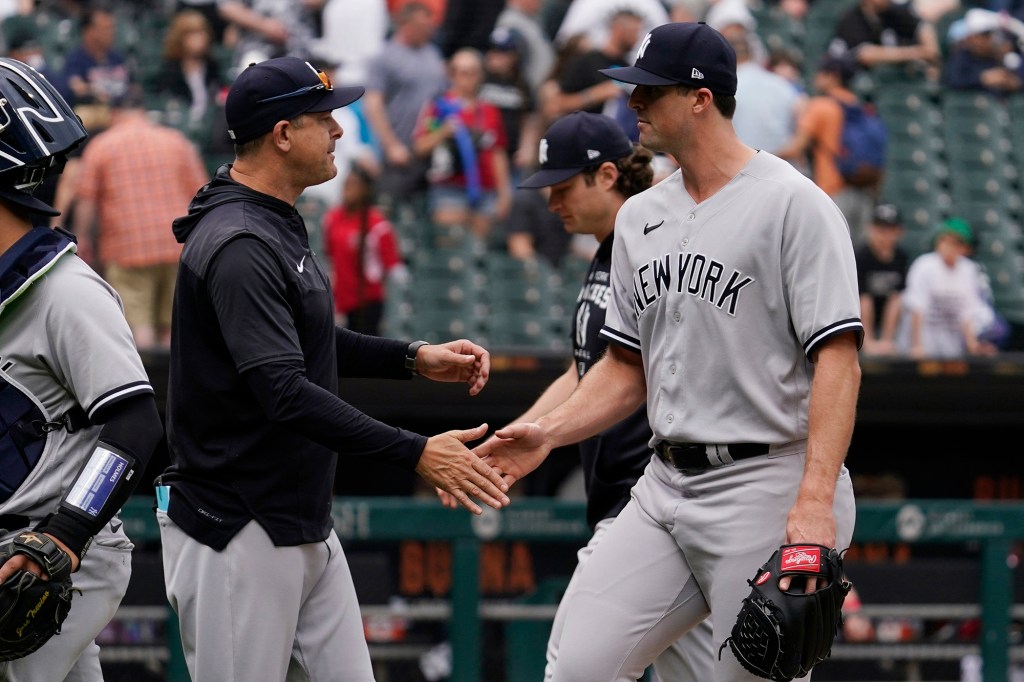 And Chapman, while still having not blown a save this year, has battled command issues occasionally — walking nine in his last 8 ²/₃ innings.

As Boone said before the game about why he went to Chapman in a tie game on the road on Saturday, they had already used Holmes.

“We have so much confidence in all of our bullpen,’’ the manager said after the 5-1 victory.

No one has been better than Holmes, acquired last season from the Pirates and extremely effective ever since.

This year, after allowing a run on three hits in his first appearance, Holmes has given up just nine hits, a pair of walks and hit a batter — while striking out 18 — in 17 ²/₃ shutout innings over his last 17 appearances.

Holmes also has been durable. His 18 ¹/₃ innings out of the bullpen are second only to long-man Michael King on the team.

Boone said Ben Rortvedt, whom the Yankees acquired in a trade from the Twins along with Josh Donaldson and Isiah Kiner-Falefa, is expected to see team physician Dr. Chris Ahmad this week and could need surgery on his knee.

Rortvedt was dealing with a strained oblique when the trade occurred and after recovering from that injury, felt something in his knee while catching in Tampa, leading to another shutdown.

The Yankees are still rolling with Jose Trevino and Kyle Higashioka and it’s unclear where Rortvedt would fit into the team’s plans if all three were healthy — other than organizational depth.

Domingo German (shoulder) is scheduled to begin throwing live batting practice this week and will be built up as a starter. With a minor league option remaining, German could go to Triple-A Scranton/Wilkes-Barre when he’s ready.

The Yankees didn’t steal any bases in Sunday’s win, but swiped three on Saturday, all in the final two innings of the one-run game.

Boone said he values that kind of play.

“It could have won us the game,’’ Boone said.

The final steal came from Kiner-Falefa, who was then thrown out when he ill-advisedly tried to advance to third on Higashioka’s sacrifice fly that scored Gallo.

“It was something to learn from,’’ Boone said. “We don’t want Isiah to lose his aggressiveness.”