BALTIMORE — Anthony Rizzo helped carry the Yankees’ offense through the first weeks of the season until Aaron Judge and Giancarlo Stanton warmed up.

Lately, it’s been Rizzo in a slump, as he entered Monday’s game 6-for-46 with a double, triple, no homers and two RBIs along with six walks and 11 strikeouts and an OPS of .455 in his last 54 plate appearances.

Prior to the game, Aaron Boone said he thought Rizzo’s swing was coming back after it was “a little off … for a week leading up to that.”

Rizzo then slammed his 10th home run of the season in the top of the ninth of Monday’s 6-2 win over the Orioles. It was his first homer since April 29.

The manager noted that Rizzo ripped two balls to the outfield in Sunday’s win over the White Sox, with a fly ball to the warning track off Michael Kopech in the sixth and a hard liner to center in the ninth, both of which measured over 100 mph, according to Statcast. 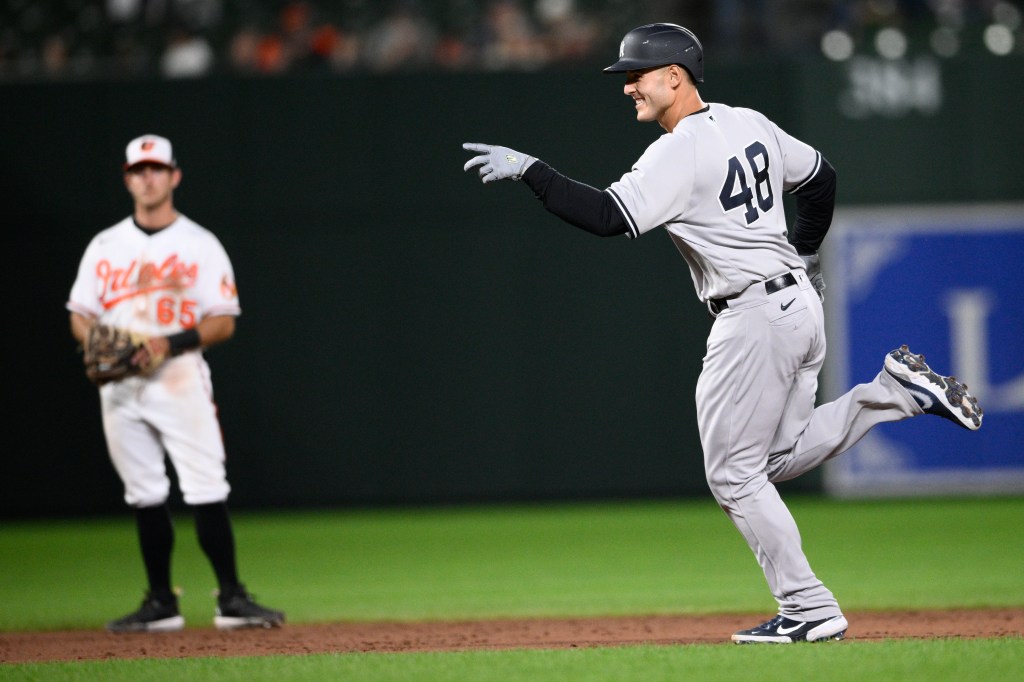 Rizzo made Boone look smart with a ninth-inning homer.

“When you get into ruts like that, at-bats like that one can help,’’ Rizzo said. “Even the outs today … felt better. One swing can switch it on.”

Aroldis Chapman pitched the bottom of the ninth since he was warming up when it was still a save situation before Rizzo and Josh Donaldson went deep in the top of the inning.

The non-save situation didn’t go well, as Chapman gave up a rocket solo homer to Anthony Santander with one out.

It was the third straight appearance in which Chapman has allowed a run after a dozen consecutive scoreless outings to start the season.

Chapman’s wildness has made him less effective as a closer and the emergence of Clay Holmes — who was in line to be used in a save situation on Sunday in Chicago before the Yankees added a pair of ninth-inning runs — will add intrigue to late-inning scenarios. 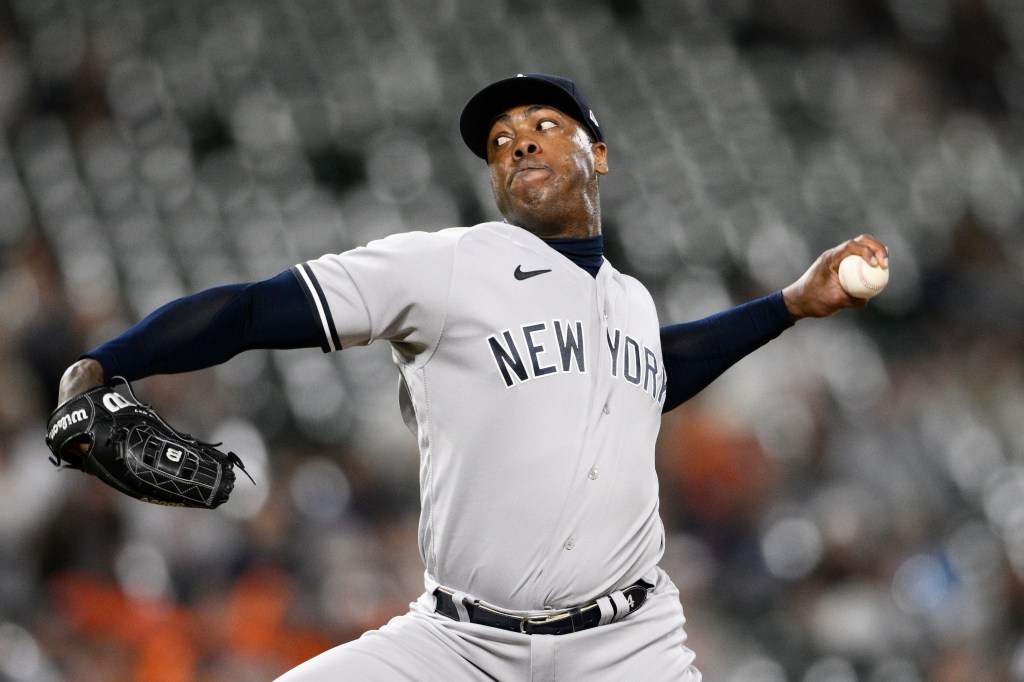 Aroldis Chapman pitches Monday during the Yankees’ win over the Orioles. AP

Prior to the season, the Yankees said they planned on getting Chapman more consistent work to prevent him from going too long between appearances, waiting for a save opportunity.

He pitched Monday, two days after Chapman allowed the winning run in the bottom of the ninth to the White Sox, battling his command again.

Aaron Judge got the day off for the first time during the Yankees’ 23-game in 22-day stretch they began on May 8.

Due to the rainouts against the Rangers earlier this month, Judge had started all nine games in the previous eight days, going 10-for-33 with three homers, eight RBIs and six walks.

The 30-year-old Judge is looking to remain healthy for a second straight season and the schedule is part of that — regardless of how well he’s going at the plate.

Boone said Monday he had targeted either Sunday’s day game in the series finale against the White Sox in Chicago or Monday.

“I think they could all use one [day off] during this stretch,’’ Boone said. “Especially the guys we depend on. “Hopefully it serves him well.”

The Yankees opted to bring Donaldson along slowly early this year, especially on defense, in an effort to keep him healthy.

Other than some mild shoulder soreness, the plan has been successful.

Donaldson had his best game in the field as a Yankee on Sunday, when he made a season-high seven assists, including a diving play to his right to rob Josh Harrison of a hit.

He made two more splendid plays at third in Monday’s win.