At this point on the baseball calendar last year, the hot stove was sizzling.

This year, with no threat of a lockout closing in on free agents and teams to get deals done, things have gotten back to normal, with a more leisurely pace to the beginning of MLB’s offseason. As of Saturday, only five players had signed major league contracts since free agency began earlier this month.

Business could start to pick up next week when the winter meetings kick off on Sunday, Dec. 4 in San Diego. The event, bringing team executives, agents and even some players into one central location, has often served as a harbinger for big signings and trades in past offseasons, and figures to be so again this year.

“A lot of stuff doesn’t kick in until the winter meetings in December,” Aaron Judge said earlier this month after winning the AL MVP Award. 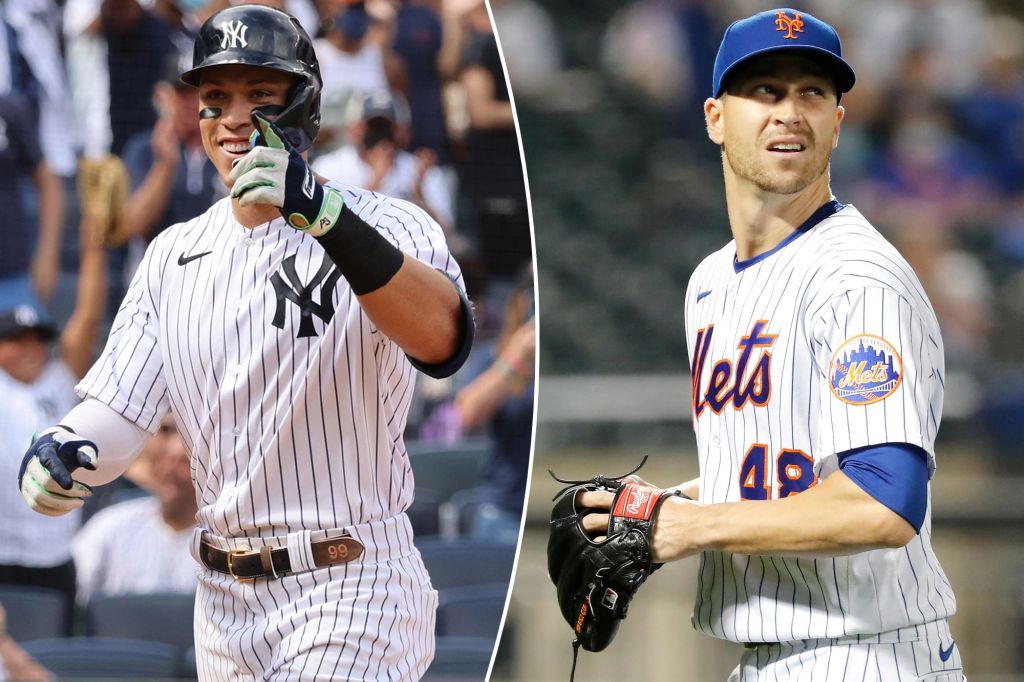 While the winter meetings will take place on the West Coast, all eyes will be on New York — with Judge and Jacob deGrom at the top of the free-agent market at their respective positions. To this point, there has not been much public indication of progress on either front in terms of the Yankees’ or Mets’ pursuit of Judge and deGrom, respectively.

Judge’s free agency did receive some juice this past week, when he took a two-day visit with his hometown Giants, though it remains to be seen whether he will take meetings with other teams before he makes his decision. The Dodgers are expected to be another suitor for Judge while Yankees general manager Brian Cashman recently said the team has an offer on the table for the star outfielder.

“[Judge’s camp] is setting the dance tune, so we’re engaged with them,” Cashman said on Nov. 17. “They know where the New York Yankees stand, and they’ve got to find out where the 29 other teams stand too. I don’t know how long that’s going to take. … What those offers look like [from other teams] and whether they need to be higher or lower, I have no idea. Those are all things for Aaron to discuss at some point. But while he’s in the thick of it with his agents and stuff, I’m sure they’ll be very quiet and under the radar, fielding all the offers they get and staying engaged with us and we’ll see what happens.”

Judge’s new contract is expected to exceed $300 million. He turned down a seven-year, $213.5 million extension offer from the Yankees before Opening Day. The only other time the Yankees signed a player to a contract worth more than $300 million, it was Gerrit Cole (nine years, $324 million), a deal that Cashman hammered out at the 2019 winter meetings in San Diego.

The Mets, meanwhile, are in a similar position with their offseason as they try to re-sign deGrom. The two-time Cy Young award winner is looking to become MLB’s highest-paid pitcher. Max Scherzer and the Mets reset the standard last year with a record $43.3 million average annual value (three years, $130 million). The Mets believe deGrom wants to stay in Queens as long as there isn’t a significant discrepancy in offers elsewhere, The Post’s Mike Puma reported last week.

The Rangers are seen as one of the Mets’ biggest threats for deGrom. Texas needs to upgrade its rotation a year after shelling out big contracts to infielders Corey Seager (10 years, $325 million) and Marcus Semien (seven years, $175 million). But the Rangers could also be in play for Carlos Rodon, the 29-year-old left-hander who would be a strong backup option for the Mets if deGrom signs elsewhere. Islanders storm past Flyers for fourth...