It is unfair to call what the Giants and their frequently depleted defensive backfield have already encountered as the preliminaries. You line up and play whatever team is on your schedule. Every game presents a challenge, and gaining a victory is an accomplishment.

But not every NFL opponent is created equal, and it just so happens the Giants, in fashioning a 3-1 record a month into Brian Daboll’s first season as head coach, have encountered some of the worst passing attacks in the league.

The season’s first four weeks have seen the Giants match up against Ryan Tannehill and the Titans, Baker Mayfield and the Panthers, Cooper Rush and the Cowboys and, most recently, Justin Fields and the Bears. The next four games, though, feature a very different slate of quarterbacks. Starting Sunday in north London, the schedule brings Aaron Rodgers and the Packers, followed by Lamar Jackson and the Ravens, Trevor Lawrence and the Jaguars and the revitalized Geno Smith and the Seahawks.

Simply put, the next four tests should be considerably more demanding than the first four tests if you are a member of the Giants’ secondary. 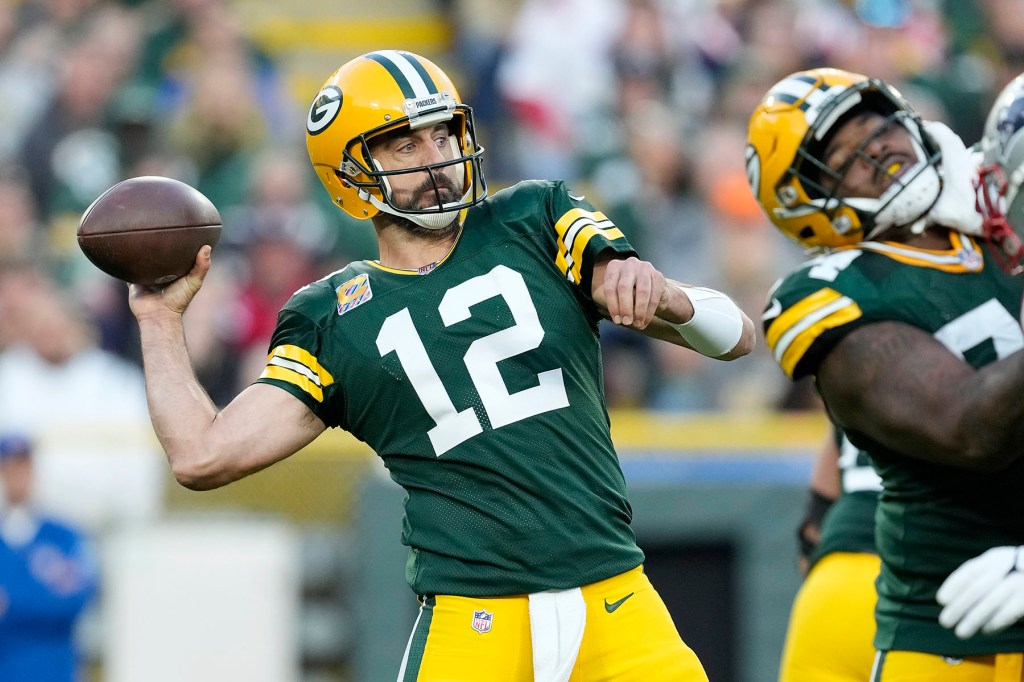 Aaron Rodgers will put the Giants’ eighth-ranked pass defense to the test this weekend in London.Getty Images

“I think we’ve got a really good defensive back group,’’ safety Xavier McKinney said when asked about the Giants preparing to face Rodgers. “We got great leaders inside of that room. I think we’ll be prepared. Obviously, we’ve got to be on our s–t because that’s one of the great ones. We’re looking forward to the challenge. It won’t be easy. We know that.’’

Rarely is anything easy. However, sometimes it is not nearly as difficult. Here are the opposing passing attacks the Giants have faced and what lies ahead: 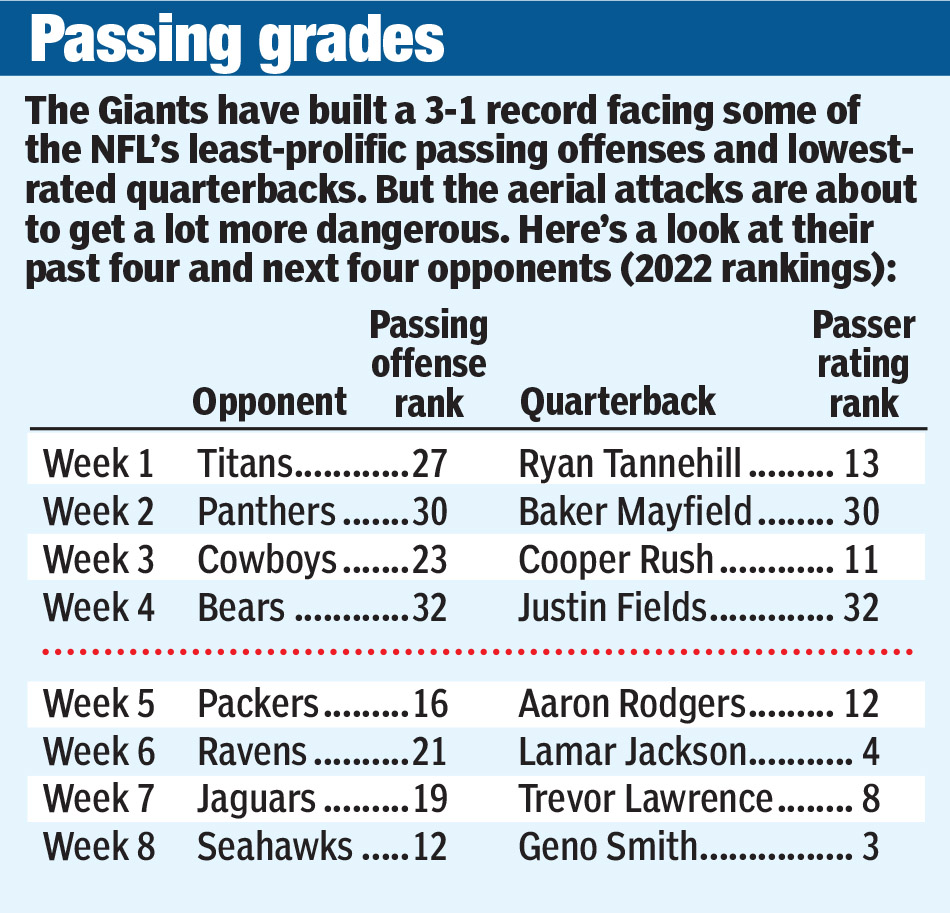 Sure, there’s no Patrick Mahomes, Josh Allen, Tom Brady or Justin Herbert coming up in the next month, but the next four weeks clearly deliver an upgrade in the quality of the quarterback play the Giants will face. And though Rodgers’ 95.6 passer rating this season is far below his career mark of 104.4, this is still the same player who compiled passer ratings of 121.5 and 111.9 the past two seasons, respectively. That he is not producing statistics in line with usual standards is likely a symptom of depleted talent around him and not his own talent depletion.

On paper, a Giants defense that ranks eighth in the NFL in allowing 191.3 yards per game would appear to be up to the task.   The defense has allowed just four passing touchdowns in four games. And opposing quarterbacks have completed just 57.4 percent of their passes against the Giants — the fourth-lowest figure in the league.

That is all good stuff. But perhaps in need of an asterisk when you consider the opposition. Furthermore, the Giants are the only team in the league without an interception this season. Where have all the ball-hawks gone?

McKinney is having a fine season at safety. The same goes for Julian Love, one of the most versatile players on the roster, though he came out of Sunday’s victory over the Bears with a concussion and his status for Sunday is uncertain. Adoree’ Jackson, the team’s top cornerback, has been solid, but certainly is not performing at a Pro Bowl-type level. 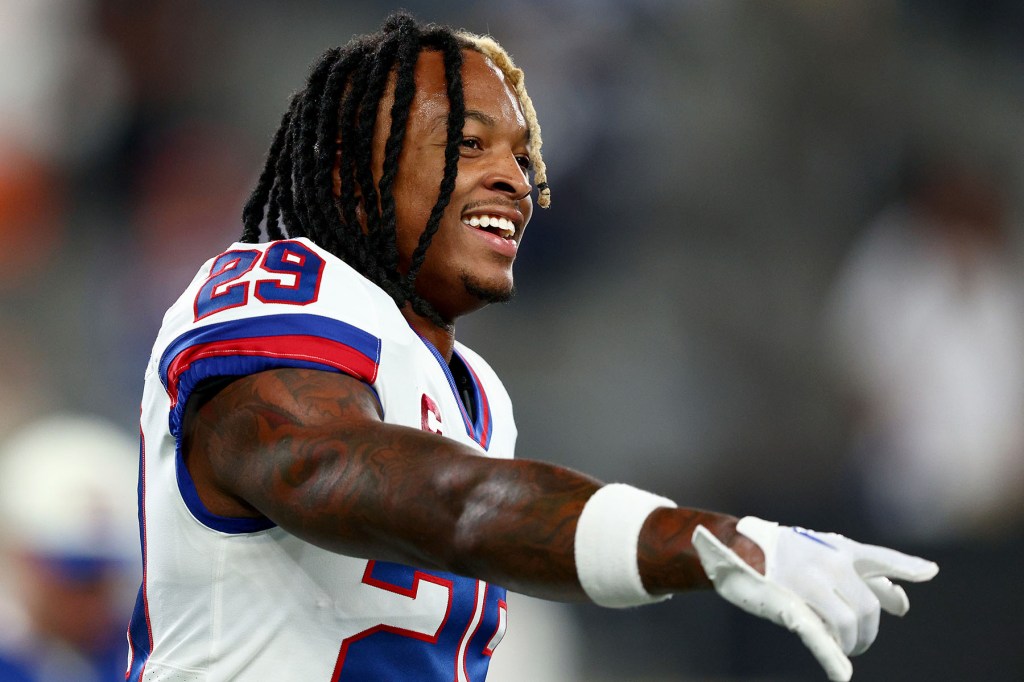 Safety Xavier McKinney has been one of the constants for a Giants pass defense that has allowed only four touchdowns in four games.Getty Images

The problems mount from there. The second starting cornerback has been a revolving door because Aaron Robinson missed two games after having his appendix removed. Robinson returned last week, but hurt his knee and will not play this weekend. That leaves Fabian Moreau, the former Falcons starter, to step in once again. Darnay Holmes has been adequate as the nickel corner, but needs to decrease his penalties. And rookie safety Dane Belton quickly has become a favorite of defensive coordinator Wink Martindale and looks like a keeper.

The pass rush, fairly dormant in the first three games, may offer some help. Young edge rushers Azeez Ojulari and rookie Kayvon Thibodeaux seemed to shake off the rust of missing the first two games with injuries to spark a re-awakened unit against the Bears. The more pressure up front, the better it is for the back end of the defense.

At some point, though, the defensive backfield is going to have to prove it can hold up on its own. There will not be much help in coverage from the inside linebackers. Martindale is sifting through a bunch of them to line up alongside Tae Crowder, but there is not a player in the group who is gifted at dropping in coverage — though Jaylon Smith has the speed to be effective as a pass defender. 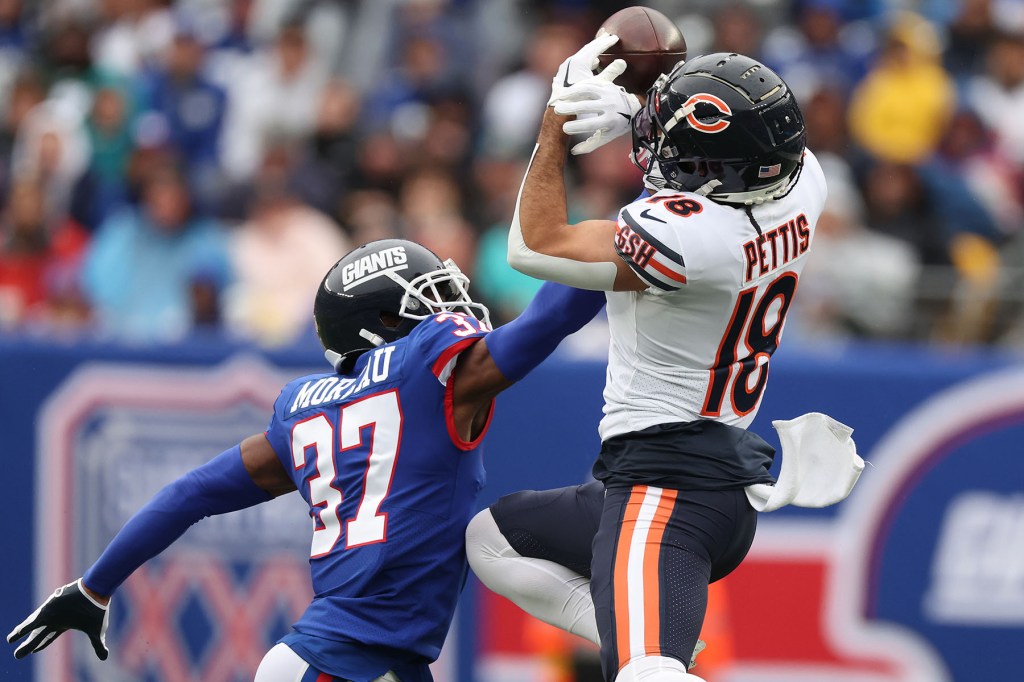 Injuries to the secondary have forced the Giants to turn to Fabian Moreau, who was signed to the practice squad off waivers in early September.Getty Images

Even with all of its potential issues, the Giants’ defense may have better success against the pass than the run. The run defense has been timely — making the necessary plays at key moments — but not dominating. The Giants have allowed the fifth-most rushing yards (564) in the NFL, and the Packers run it well with Aaron Jones, who averages 6.8 yards per attempt. Of course, they almost always throw it exceedingly well with Rodgers, who will play his first game in England (the Packers are the league’s last team to sojourn over the Atlantic Ocean for a regular-season game). The Giants should expect him to be on point because he usually is. As McKinney, a team captain, so aptly put it, they better be “on their s–t” on the back end of their defense for the start of what will be a string of quarterback challenges tougher than they’ve any they have faced this season.

Big Dex to the rescue

Dexter Lawrence is a big man. In a locker room full of big guys, he is one of the biggest. At 6-foot-4 and 342 pounds, his torso looks as if it was modeled after a tank. With his linemate Leonard Williams out with a knee injury, Giants opponents won’t be able to avoid a player who in his Twitter handle refers to himself as “Sexy Dexy.’’ Lawrence was on the field for 58 of 62 defensive snaps against the Bears. That is working overtime for such a large individual.

Lawrence also had two sacks in a game for the first time in his career, filling the run-stopping and pass-rushing role vacated by Williams’ absence. 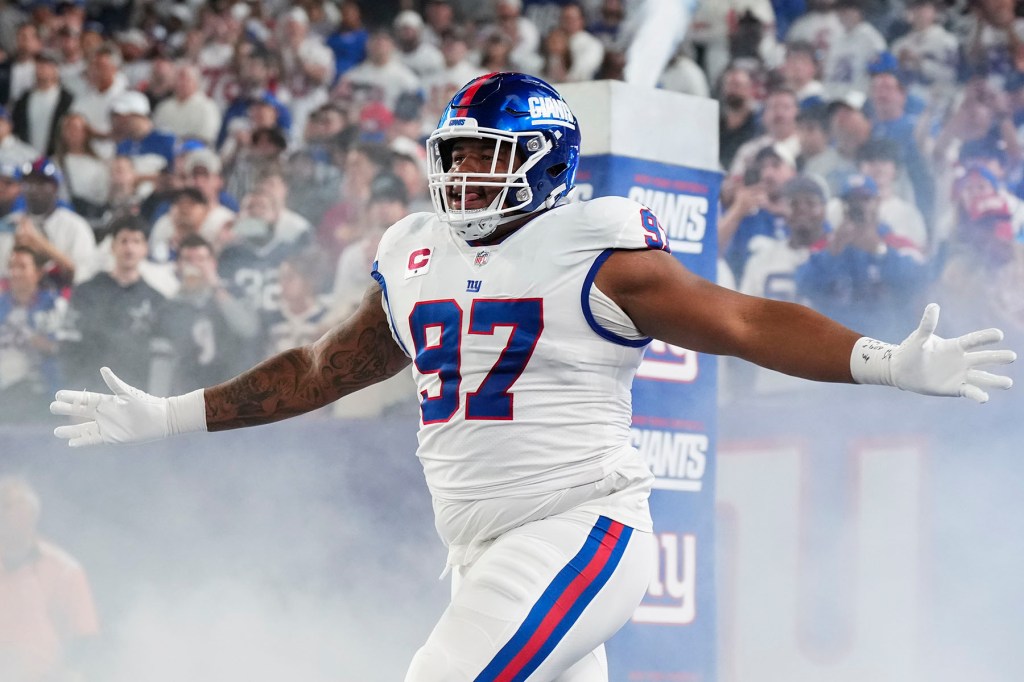 Long known as a run-stopper on defense, Dexter Lawrence has proven to be effective in passing situations while filling in for the injured Leonard Williams.Getty Images

His ability to fill both roles has often been a sticking point with Lawrence. He came to the Giants as the No. 17 overall selection in the 2019 NFL Draft, a pick acquired from the Browns in the trade that sent Odell Beckham Jr. to Cleveland. At the time, general manager Dave Gettleman justified the selection by saying Lawrence was more than a run-stopping interior defensive lineman, that he had pass rush potential because he could push and collapse the pocket, occasionally getting sacks and frequently forcing the quarterback to step into the pressure from the outside defensive ends and edge rushers.

Lawrence has been more run stopper than pass rusher (11 career sacks) in his time with the Giants but he’s still been supremely effective. One of the first big decisions general manager Joe Schoen made upon arrival was to pick up Lawrence’s fifth-year option, which guarantees him $10.8 million in 2023. This means Lawrence, 24, is part of the plan moving forward. It would not be a surprise if Schoen seeks to sign Lawrence to a long-term deal, rather than have him play on the fifth-year option contract.

Lawrence is more than living up to the new regime’s faith in him. He ranks as the No. 4 interior defender in the NFL by Pro Football Focus with a nearly identical grade as the No. 3 player, someone named Aaron Donald.

Here are two questions that have come up recently that we will attempt to answer as accurately as possible:

There seems to be a disconnect with Tae Crowder. This coaching staff clearly likes him, yet fans do not seem to appreciate what he contributes on the field. What gives?

Yes, this new coaching staff is in on Crowder. There have been 249 snaps on defense in the first four games, and Crowder has been on the field for 239 of them — including every snap in Games 1, 3 and 4. Defensive coordinator Wink Martindale has not yet settled on Crowder’s running mate at inside linebacker, sorting among Blake Martinez (who was released after training camp), Austin Calitro, rookie Micah McFadden and, most recently, Jaylon Smith. Despite the affection from the coaching staff, Crowder does not get much love from Pro Football Focus, which grades him as the No. 77 linebacker this season. His missed tackles (nine) hurt his grade. Crowder comes in one rankings spot ahead of the Buccaneers’ Devin White, who was the No. 5 overall pick in the 2019 NFL Draft. 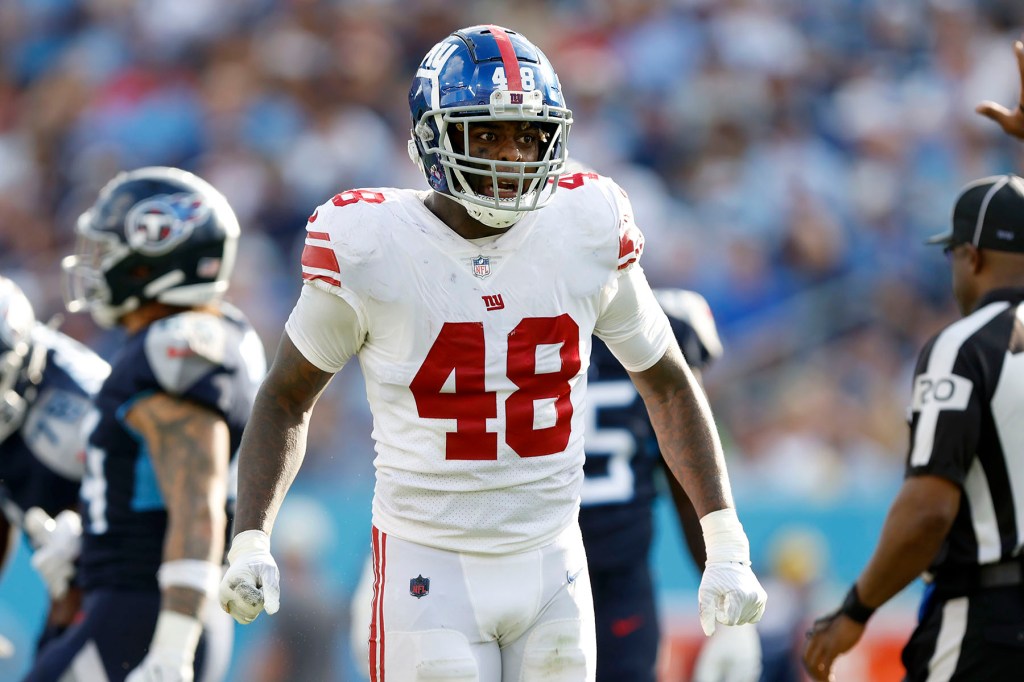 Tae Crowder may not be a favorite of Pro Football Focus’ grading system, but he has clearly won over the Giants’ coaching staff.Getty Images

Perhaps Crowder’s draft history continues to be held against him. He was received the title of Mr. Irrelevant as the 255th and final pick in the 2020 draft. After starting six games as a rookie, he opened all 17 in 2021. Considering this is the second coaching staff that has kept him on the roster and on the field, he must be doing something right.

How much of a change in scheduling and the work week is required with Sunday’s game being played in London?

Actually, not a great deal. Daboll decided to stay home and work at the team facility as long as possible before crossing over to England. The Giants will practice at their facility Thursday and board their charter flight that evening. There will be a light walk-through workout Friday in London, followed by the normal team meetings on Saturday before the game with the Packers on Sunday at Tottenham Hotspur Stadium.

Daboll is trying to treat this game as much like a normal long-distance road trip as possible. As this is the first time Daboll is part of a team that will play in Europe, he is relying on those who have previously made this trip — the Giants played in London in 2007 and 2016 — to help with the logistics and all the details that go into moving an entire team overseas. “Not much longer travel time than it is to go to the West Coast,’’ Daboll said, “so we’ll just try to do our job during the week to get ready.’’